It’s the time of the year again. In Singapore, or at least in the Tropics, this is the season when the weather gets really wet. Over the last week, it is safe to say that we have had rain for almost every single day.

What is even troubling is the fact that the weather is seemingly sunny for a moment, and it starts to shower at the next instant. For watch-lovers like us, this is not an ideal situation. It is not ideal for us to wear watches with leather strap; it is even worse for those who are fond of wearing vintage pieces which are not exactly waterproof.

This gave us an idea. In this week’s article, we are going to introduce a few watches with bracelets at different price points. We particularly chose bracelet watches as they are more versatile than the rubber strap counterparts, and they are not susceptible to water damages unlike leather straps. So, what have we chosen? Let’s find out! The Casio G-Shock GMW-B5000 – for those who are looking for something more casual.

We begin the article with one of hottest pieces from Casio this year: the G-Shock GMW-B5000.

Launched earlier this year, the G-Shock GMW-B5000 is the first watch in the 5000-series to feature a full metal construction. The design brings out another side of G-Shock – away from the usual rubber-cladded watches that we were used to. This makes it one of the coolest G-Shocks that we have seen so far.

The G-Shock is perfect for someone who wants to rock a casual “street-wear” look, with a bit of flashiness to it. No doubt, the usual G-Shocks are very capable of sheltering itself from the weather elements, but we feel that the GMW-B5000 takes it up a notch with a strong statement. Priced at S$799, we think that this is one timepiece that will capture the attention of many watch collectors – regardless whether they are fans of G-Shocks (or for that matter, digital watches) or not. The new Seiko Presage SJE073/SARA015. Some dubbed it the “Baby Snowflake”, all thanks to the nicely executed dial that resembles its Grand Seiko counterpart.

Continuing from the “Land of the Rising Sun”, we have the Seiko Presage (Reference: SJE073/SARA015).

Dubbed as the “Baby Snowflake”, this particular Presage is a wee bit more special than most of its counterparts. The greatest difference perhaps lies in the dial. It is because this watch is fitted with a textured dial bears a visual semblance to its Grand Seiko counterpart. It is complemented with some nicely polished hands and indices as well, which completes the look of this stunning timepiece.

The 40.7mm timepiece, which features a brand new case design, is powered by the ever-reliable Calibre 6L35. The in-house self-winding movement boasts a thinness of a mere 3.7mm. It has a power reserve of 45 hours, and an improved accuracy of +10/-15 seconds a day. The finishing is adequate for its price point.

Finally, it is priced at €2,200 (approximately S$3,431). While it is slightly pricier than most of its Presage brethren, we think that the premium is well justified with the quality of the final product. In addition, it is also limited to a production of 1,881 pieces, which further enhances the value and desirability of this timepiece. The “Baby Snowflake” is certainly a winner. The Cartier Santos is a timeless icon.

If we told you that the Cartier Santos is the original pilot’s wristwatch, it might be seemingly far-fetched. After all, the pilot watches that we are familiar with are pieces like the Breitling Navitimer or the IWC Big Pilot – and the Santos does not hold any resemblance to either of them. But the Santos – launched in 1904 – is the “OG” of this genre of timepieces.

Since its inception, the Santos has been an icon. Its square case, coupled with a bezel with exposed screws, is a sight that is instantly recognised by many. The collection was regularly facelifted with some slight changes to its visual cues, before it was discontinued briefly in 2016.

Then, in SIHH 2018, Cartier relaunched the Santos. The new Santos still retains its signature looks, but it now comes with a slimmer case profile. The updated Santos comes with three models: a smaller no date automatic, a large size with date model, and a skeleton dial model. Based on past observations, the large size model is always the most popular variant.

The Cartier Santos is the powered by the Calibre 1847 MC. It is an entry-level movement, albeit produced in-house. The watch beats at 4Hz with a modest power reserve of around 42 hours. The large variant will be priced at €6,600 (approximately S$10,295), and it will come with an additional leather strap which can be easily interchanged via a quick release system. The Rolex Cosmograph Daytona is a watch that probably needs no further introduction. The latest variant, which was updated in 2016, features some slight cosmetic changes with includes a new scratch-proof black Cerachrom bezel. Besides that, there are few differences as compared to its predecessor.

Powered by the in-house Caliber 4130, the self-winding movement is fitted with a column wheel and vertical clutch system for its chronograph function. It has a decent power reserve of around 72 hours, and the movement is certified to perform with an accuracy of +/- 2 seconds per day.

The 40mm watch is priced at S$16,600. It is virtually impossible to get the timepiece, with a waiting list that stretches for up to a few years. But the Daytona is truly a solid timepiece, and we dare say that it is one of the best all-rounder timepieces that is available in the market today. 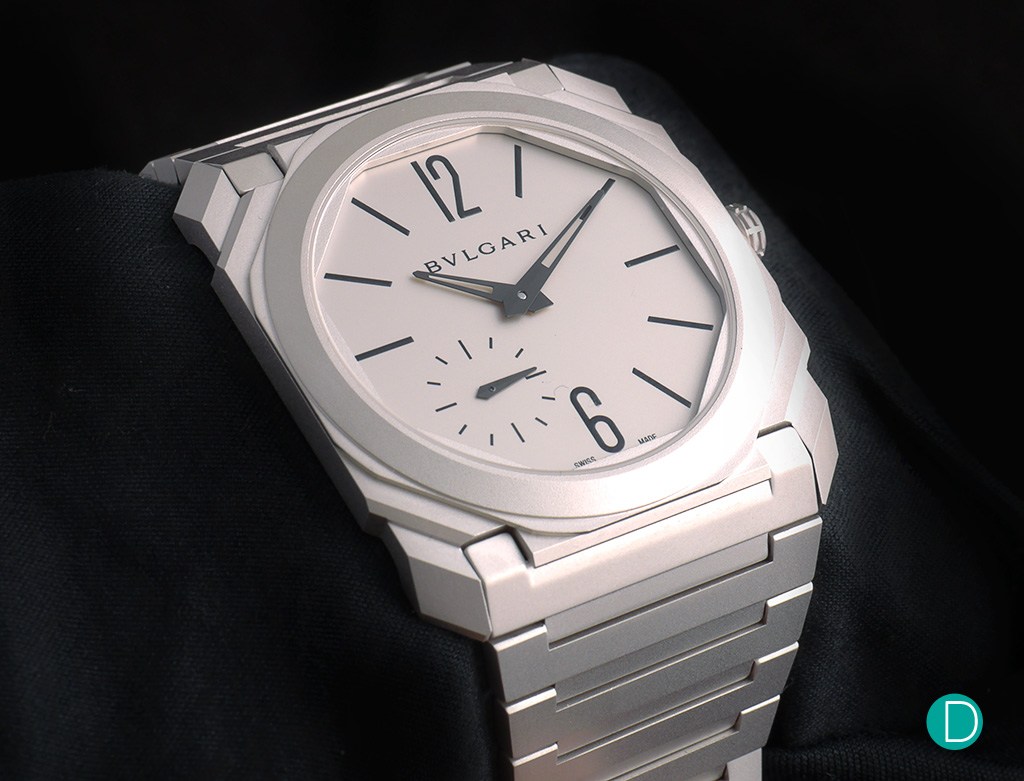 The Bvlgari Octo Finissimo Automatic is truly a work of art.

Bvlgari is a brand that is often synonymous with fashion. However, in recent years, Bulgari had offered collectors an interesting proposition with the Octo Finissimo line-up. The Octo, which is a classic featuring an octagon and circular design, certainly reinvented our perception of the brand with its take on ultra-thin watches. It suddenly got everyone to sit up and do a double take on them.

The 2018 edition of Baselworld had seen Bulgari expand its variant of the Octo Finissimo Automatique. The minimalistic time-only watch is now available in both sand-blasted stainless steel and pink gold. As per its previous version, the watch features a nicely-finished BVL 138 movement that comes with a platinum micro-rotor as well.

The 40mm Octo Finissimo is priced at S$18,350 and S$61,100 for the stainless steel and pink gold version respectively. The watch, in our opinion, combines style and craftsmanship nicely. It is a very handsome watch, and one that is certainly bold but not too loud. Stylishness does not come better than this. Vacheron Constantin Overseas in stainless steel case and silver dial. Shown here with the stainless steel bracelet which can be switched to either a croc strap or rubber strap in one easy procedure.

Finally, we round up the article with the Vacheron Constantin Overseas 4500V.

When it comes to luxury sports watches, the Overseas is seemingly behind in the pecking order – often in the shadows of Patek Philippe’s Nautilus and Audemars Piguet’s Royal Oak. The updated Overseas, however, is an interesting piece that might turn the tables around. This is because the latest variant of VC’s sports watch is fitted with a beautiful in-house Calibre 5100, as well as its pièce de résistance that lies within its ingenious quick release mechanism for the watch’s strap. The latter is brilliant and seamless, and it allows the Overseas to be versatile enough for whatever occasion that it is being called upon.

Priced at S$30,800, we reckon the watch offers collectors a serious alternative to the likes of both the Royal Oak and Nautilus. The Overseas is truly an understated piece, and its versatility is something that makes the watch a rather unique and interesting proposition within its category.

Bracelet watches can be sexy too, as seen in the six watches that we have highlighted above. We think that the challenge is to design a bracelet that is not too tacky, and it must integrate well with the case design. In addition, it must be comfortable on the wrists as well. The Vacheron Constantin Overseas, as well as the Bvlgari Octo Finissimo, are great examples of bracelet watches that encapsulates these characteristics together.

We do note that these days, brands have made their leather straps more robust to protect the bands from harsher weather elements. One example is Hublot, in which they have lined the underside of the strap with rubber instead. This prevents the rainwater (and sweat) from seeping into the underside strap, and protecting it from the unpleasant odour that comes right after a while.

Let us know your thoughts on this, as well as the other watches that you think deserves a place on the list (we are looking at you, the fanboys and fangirls of the Royal Oak and/or Nautilus) in the comments section below. Ciao!