In recent times, Singapore’s Mass Rapid Transit – the equivalent of the Metro – has been plagued by faults and breakdowns. It is certainly not exactly a pleasant experience, especially if you are running late and you are unable to do anything about the trains.

However, we are not looking at how we are able to alleviate the problem. After all, we are writers, and not engineers. But something did cross our minds. You see, we have always been commenting on how the chronograph is a cool complication, and yet we do not have many practical applications for it. So, we thought of the different means that we might be able to utilise the chronograph – and low and behold, we can actually use it to calculate how long we are stuck in the train!

Therefore, in this week’s article, with tongue firmly in cheek, we look at six different chronographs that we think will fit the purpose nicely. What have we selected? Let’s find out! 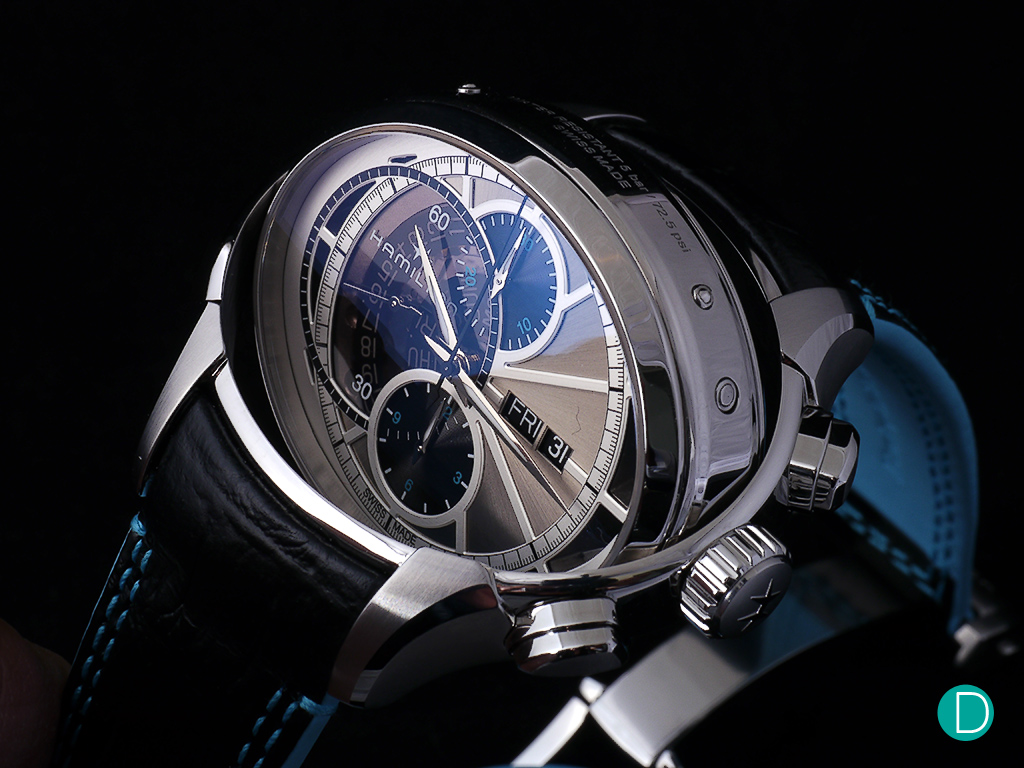 We begin the article with a fascinating and lesser known timepiece from Hamilton: the Jazzmaster Face-to-Face II.

Initially launched in 2013, the Face-to-Face had attracted a fair bit of attention. It is particularly interesting due to its concept – it has two faces, and that it can be changed by turning the rotatable case. Then, in 2016, Hamilton relaunched the model – this time, it uses only one movement, instead of two for the original model. The movement in question is Hamilton’s H-41, based on a modified Valjoux 7750. It features a chronograph, as well as a time and date indicator. While the front dial features a chronograph display, the reserve side is fitted with some rather interesting chronograph scales too, such as the tachymeter, pulsometer, and telemeter.

Overall, this is definitely an interesting timepiece. Our only qualm is that the dial can only be rotated when it is not worn on the wrist. Its flipping mechanism is not as elegant as Jaeger LeCoultre’s Reverso, but kudos should be given to Hamilton for the guts to develop such an unusual timepiece. The watch retails at S$5,730, and it is limited to 1,999 pieces. When it comes to watches from Sinn, the U1 is probably one of the timepieces that will first come to mind. It is not surprising though, considering that the U1 is a rather cool and solid tool watch. And yes, it is rather good-looking too.

But there are definitely some other excellent pieces from the German watch manufacturer, and we like the chronographs. One favourite is the 356 SA Pilot III. The timepiece, which comes with a classic design that is referenced to the pilot’s chronographs of the 90s. For starters, it is certainly good looking. But what makes it stand out from the rest of the pilot’s chronograph are two things – its size, as well as the dial design. First, the 356 SA Pilot III is a 38.5mm watch, which we think is reasonably sized and wears nicely. Second, and more importantly, the watch is fitted with a silver dial that comes with guilloché pattern. This makes it a tad different, and it gives the watch a rather industrial and teutonic feel to it.

The watch uses the Sellita SW500 movement. While it is nothing much to shout about, this self-winding caliber is a workhorse, with both a day-date indicator and a decent power reserve of around 44 hours. Prices start at US$2,570 (approximately S$3,488), at we reckon that this is pretty much a well-made timepiece that offers an excellent value proposition. Something slightly different from the typical chronographs – the Glycine Airman Airfighter.

If the usual chronographs are a little boring, you might want to sit up and take a look at Glycine’s Airman Airfighter.

At the first glance, the watch’s sliding actuator had caught our attention. Unlike the usual chronographs that has pushers to activate the chronograph, the Airman Airfighter actually fitted the watch with a sliding actuator. The chronograph can be activated or stopped by sliding the actuator upwards, and reset by sliding it downwards. While it is nothing technically sophisticated, but its operation is certainly a novelty for some of us.

The watch is fitted with the GL754 movement, derived from Valjoux’s 7754. It features a chronograph, a date indicator, as well as a 24-hour GMT hand. Glycine had fitted the watch with an exhibition caseback, to display the decorated movement.

Priced at US$4,800 (approximately S$6,514), the Glycine Airman Airfighter is slightly on the pricier end for this category of watches. However, it is a fun and novel piece to own, and we reckon that the cool factor might result in collectors purchasing this timepiece. Many serious collectors have a soft spot for Seiko watches, and we are no exception either. But when it comes to this particular brand, there are certain pieces that have definitely tugged our heartstrings, and the 60th Anniversary Automatic Limited Edition Chronograph is a timepiece that had made us fall in love over and over again.

The watch, which its namesake suggests, is meant to celebrate the 60th anniversary of the Presage collection. It is available in two different variants, namely the black Urushi lacquered dial, or the white enamel dial. While both are nice, but we feel that the former is slightly special – after all, the dial is produced by using the sap from Japanese lacquer trees, and it is applied a layer at a time before being polished by hand. It goes through this process several times, which results in the shine that we see from the dial itself. The black dial is brilliant, and it definitely contrast very well with both the steel case, as well as the silver markings.

Powered by Seiko’s Caliber 8R48, the self-winding movement features a vertical clutch and column wheel for the chronograph. It has a power reserve of around 45 hours, and the finishing is pretty decent. The 42mm timepiece retails at €2,800 (approximately S$4,400), and they are only 1,000 pieces for each variant that are produced. The watch, with its yellow accents, is produced in collaboration with the Renault Sport F1 Team. There are three different models in the series, of which they were inspired by the steering wheels of the Formula 1 car. We think that this is a rather cool piece timepiece to wear, with its colourful design. and with the three models to choose from. In addition, we also like the BR03-94 RS17 for its balanced design – we feel that both the BRX1 might be a bit too flamboyant and loud, for some collectors.

The BR03-94 RS17 is fitted with BR-CAL301, an automatic caliber that is based on the ETA 2894-2. It comes with both the chronograph and date function, and boasts a power reserve of around 40 hours. While the movement is nothing special, but we reckon that the main highlight of the 42mm matt black timepiece is its design. It is certainly something unique, and we think that it will attract F1 fanatics. The watch is priced at S$9,000, and it is limited edition to only 500 pieces. Another cool and intriguing timepiece: the Graham Chronofighter Superlight Carbon.

Finally, we have the Graham Chronofighter Superlight Carbon.

Graham is an interesting watch manufacturer, and they are probably most well-known for the Chronofighter collection. The watch is instantly recognisable with its oversized fast-action start-stop trigger, which reminds us of the trigger button from the control stick of a fighter jet.

Besides that, the 47mm timepiece is actually a rather cool and contemporary timepiece. The watch cased in super-lightweight black carbon composite case, and it is paired with both yellow and turquoise accents. The turquoise strap adds an interesting dimension to the timepiece as well, although we may think that some collectors might have preferred a darker colour instead.

Priced at S$14,873, the Graham Chronofighter Superlight Carbon is priced rather decently for a timepiece with such an exotic case. It may not necessarily be everyone’s cup of tea, but nonetheless, we think that this is an interesting watch – and one that certainly deserves a spot in today’s article.

This week’s article features quite a few interesting chronographs – the ones that are slightly more unusual in terms of their design. Some of the more notable ones include the Hamilton Jazzmaster Face-to-Face II, and the Glycine Airman Airfighter. We feel that these watches are a tad unusual and underrepresented, and it will provide some “fun” factor against the usual suspects, such as the Omega Speedmaster or the Rolex Daytona.

On the other hand, we believe that there should be some contrast in our selection – hence the choice of both the Sinn 356 SA Pilot III, as well as the Seiko 60th Anniversary Chronograph. Both are excellent choices as well, and we think that these two pieces offer an excellent value proposition. The prices are rather affordable as well – which make the watches a great option for young and new collectors who wants to own a decent chronograph.

So, what are your thoughts on our selection today? Do you prefer these watches, or would you rather stick with the mainstream chronographs? Let us know in the comments section below!