The Panerai PAM000 is the most basic Panerai, but with so much hidden personality. It is often also referred to as the ‘zero’ or base logo, and to me, is an illustration of the importance of simplicity and style. A watch that you can wear, no matter the situation. The Panerai PAM000 on the wrist. Photo by owner.

The PAM000 comes in a 44mm stainless steel case complemented by a contrast of chubby lines and sharp edges. At 44 mm, this is not a small watch by any means, however, the way it wears is incredible. I had never worn a watch as big as the PAM000, as I usually keep the size of a watch at the back of my mind when I am buying a watch. Another striking feature of the PAM000 that captivated me was the trademark Panerai half crescent crown guard.

After my first encounter with the PAM000, I couldn’t stop thinking about it. I had fallen in love! The half crescent crown guard tells a story of when Panerai was as much a marine tool producing company as it was a watch workshop (Officine Panerai) and watchmaking school. In the early 1900’s, Panerai supplied to the military needs of the Royal Italian Navy, and after visiting Florence earlier in the year, I realised I had to procure my first Panerai. The case back of the PAM000. Photo by owner.

The PAM000 is quite a simple timepiece, featuring only an hour and minutes hand as well as, a closed case back which is home to the manual winding Panerai OP I Calibre movement. I love the handwound movement, as it forces you to build a relationship with your watch because you need to wind your watch every few days. A symbiotic relationship. You wind the watch, and in turn, it tells you the time. 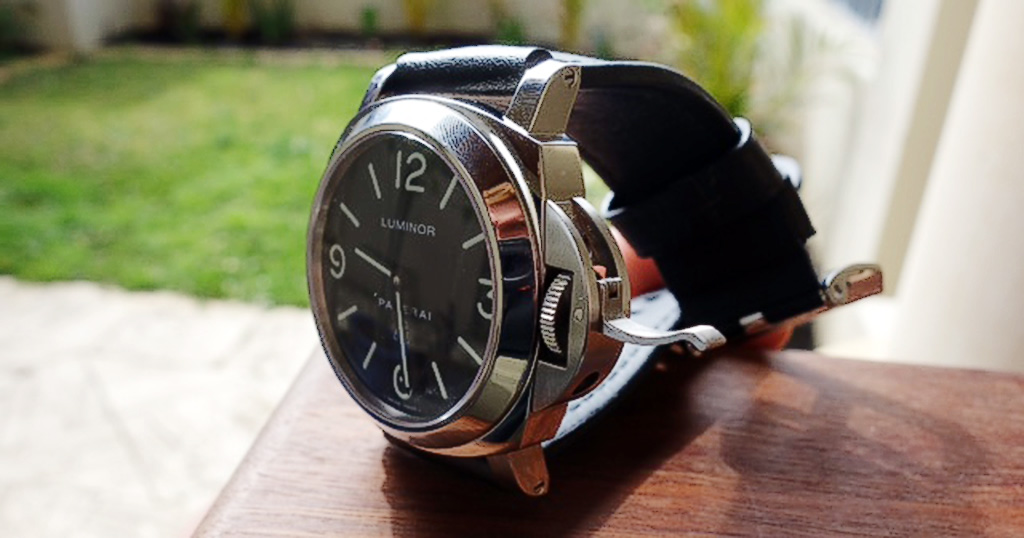 A sideways photograph attempting to show the sausage dial of the PAM000. The indicators are decorated on the surface of the dial and has a humped like luminous material filled (like half of a sausage). This is known as the “Sausage” dial (aka Painted and applied dial, all the same). Though this is more straight forward, and some say less elegant, it is more true to heritage. Photo by owner.

Looking past the hands, you will see the half sausage like indicators (numbers) and the white Officine Panerai OP logo. These indicators are evidence of the sausage dial, considered to be a less sophisticated technique, however more in accordance with the heritage of Panerai. Harmonised with a clean black dial, the 000 carries the heritage elements Panerai has been featuring for many years

The green lume glow is attributed to the Super Luminova glowing material that makes up the half sausage. Not the same as what was once self-luminous tritium based glow paint. The newer super luminova requires a ‘charge up’ by external light before it glows throughout the night. Another wrist shot of the PAM000.

So, what is the highlight of the PAM000 and Panerai in particular?

The versatility and freedom to wear the watch however you like! Dress it up or dress it down. With the handmade and customised watch strap market growing, and the ease of changing a strap on your Panerai, the possibilities are endless. Honourable mentions of companies killing the strap game are Kyros Straps and Combat Straps, two companies you’re sure to see on my Instagram page (@paneraiadventures) soon!

All in all, the instantly recognisable design of Panerai means wearing this watch will always be a conversation starter. Versatility, Simplicity and style are all carried through the 000 and I look forward to the adventures and the people I will meet along the way.