Budding collectors have a problem. We tend to lash out the excuse that it was love at first sight with almost every watch we bought on impulse. I used that excuse a few months back, and looking back, I still believe that it was truly love at first sight. Let’s take a closer look at the Grand Seiko 6145-8030 and you can be the judge if it was an excuse or true love found.

The second hand market can be grey and dodgey. Even big auction houses sometimes have problems confirming authenticity or provenance, much less the average Jane like you and I. Despite the perils, the second hand market remains attractive and strong. Perhaps the strongest reason is that these watches are discontinued and not available anywhere else, so if you were to ever see or own one, it could have to be from the second hand market. Well, there is also the money saving factor, but many wonder if the risks are worth the savings.

Being just an average Jane, I wouldn’t be confident of promptly recognizing a fake even when it is placed next to an authentic one. One of my preferred ways around this is to visit reputable shops. I chanced upon this shop while browsing through Instagram, and decided to go take a look. The reviews on the shop are pretty solid too!

The shop isn’t a megastore. It was a comfortably inviting shop, with every wall and corner decorated with art pieces and timepieces. Bulk of the shop was a long display cabinet containing, you guessed it, second hand watches. I went to the far end of the cabinet, and began the visual journey back towards to the entrance of the shop. That was when I had to use the excuse of love at first sight when I saw the 6145-8030. I took photos, I admired it, I asked about it, but I did not buy it. Even after I left the shop, I couldn’t stop thinking about it. The next morning, I woke up (in a jolt) remembering that I asked the shop to help me reserve it, only to hear that it was sold as I left the door! But that memory seemed too fuzzy for a memory and too vivid for a dream. I quickly dropped the shop a text, and to my relief, the watch was available and that my memory was no more than a nightmare. Phew! Now that my conscious mind is fully aware of my sub-conscious wants, I knew I had to get the watch. The highlight feature of the watch is the attention grabbing dial, with a tree bark pattern when viewed from this angle.

When I first saw the Grand Seiko 6145, I couldn’t take my eyes off it. I went in for a closer look, and it looked even better up close. Words cannot describe the brilliance exuding from the starlight dial. At some angles, it glitters like the sea under a setting sun. At other angles it is a soft matte yellow glow. When viewed up close, it looks like more tree bark grains. And then when you view it under a loupe, the pattern turns criss cross and linen like. I really don’t think I’ve come across such a shape-shifting dial texture to take on such different looks when playing with light. Seiko has earned itself a reputation for making top notch dials across watches of all budget ranges. But I’m confident to say that this one takes the cake, and more impressively is how this was made all the way back in the 1960s when precision engineering would be rare and expensive. 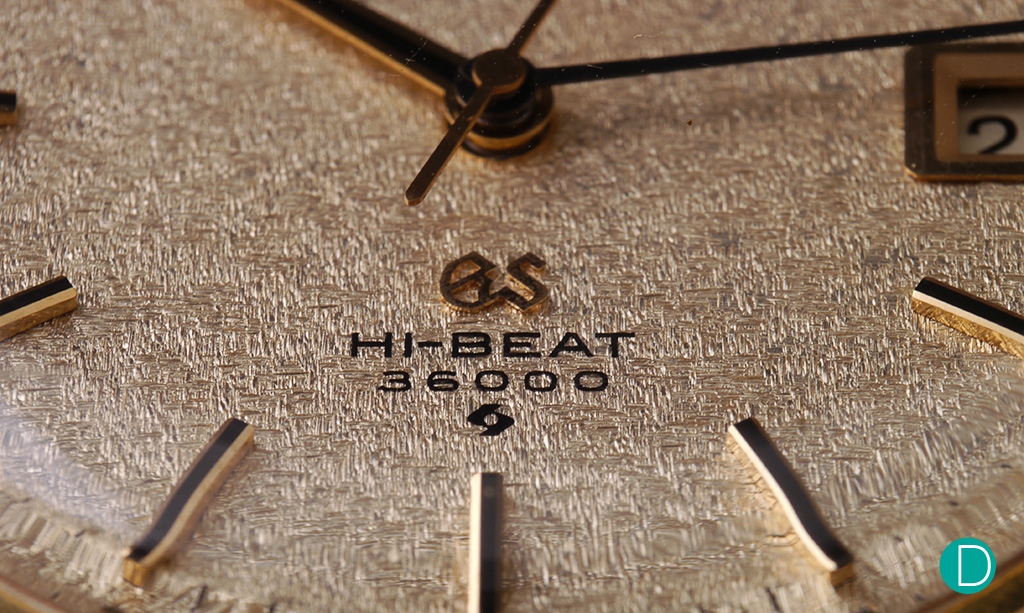 Criss-cross linen pattern when viewed up close, the reflections of the dial can be clearly seen on the markers. The dial is so gorgeous it sort of takes away the attention from the hand hammered gold case, which is an artwork on its own. Gold is a relatively soft metal, and with the age and wear on this piece, the texture has become a mix of smooth peaks and rough troughs. We asked Seiko about the finishing of the Grand Seiko 6145 case, and they have confirmed that these were first pressed and polished, followed by a hand finishing process to achieve the “dental pattern” of undulating surface. These dents are produced by meticulous drilling onto the case, using a special drill that’s similar to that of a dental drill. Close up of the dental pattern on the 18K gold case

A modern watch of a visually similar finish can be found on the Casio MR-G (MRG-2000HA full review here), but it is unlikely that the process is the same. We reckon MR-G was made by hammering process. We’ve also had readers comparing the process and finish to Audemar Piguet’s Frosted Gold finishing. Both are dazzling finishing techniques in my opinion. The frosted gold finishing is done mechanically, with a sharp diamond tipped tool imparting a shallow and precise depth over the metal’s surface at 12,000 Hz. The result are microscopic densely packed indentations that look more like glitter. The Japanese method is entirely manually, so each dent is of slightly different force, creating a unique indentation. The tool used is of course more blunt than the diamond tip used on frosted gold, to create very different visual effects. Typical of Grand Seiko’s “Grammar of Design”, the case comes with very short lugs, making it particularly wearable on my small wrist. The case size measures 37.5mm while the lugs to lugs were only 39mm. Those who know me would know that watches larger than 40mm sit on my wrist like desk clocks so I was very happy to see that this rests comfortably on me. The shape of the case, on the other hand, does not quite obey the Grammar of Design with it’s curved tonneau shape.While I personally do prefer the modern case shape such as that on SBGA series, but that would leave too small a surface for showing off the dental pattern!

The hands and markers The markers are faceted and the top is coloured black to provide contrast. The GS has a closed case back.

Now some technical details about this watch. All watches in the 61GS series runs on the Hi-Beat 36000. There’s so much information about the Hi-Beat available and leaves little more for me to say. It’s one of those reliable work horses to have been churned out of Seiko’s factories. At such a high frequency, the second hand moves along rather smoothly albeit not as smooth as Seiko’s later invention of the Spring Drive, where the hand is literally gliding. Considering the Grand Seiko 6145’s age and that it isn’t from the VFA series, I find that it keeps rather good time. I wore it every other day for a week and didn’t notice any significant deviation. Well, at least nobody at work was complaining that I’ve become less punctual.

In recent months, Grand Seiko has launched a new limited edition series that features a very similar (if not identical) dial, the SBGA384, SBGA385 and SBGA387. I have not seen this series in person, but I can imagine how much better they would look in person than in photographs. I may be biased, but in my opinion, the 6145-8030 has a warmer colour and overall style that makes it more pleasing than the SBGA384. But where the SBGA384 lacks in the aesthetics department, it makes up for it by plugging in my favourite Spring Drive movement. 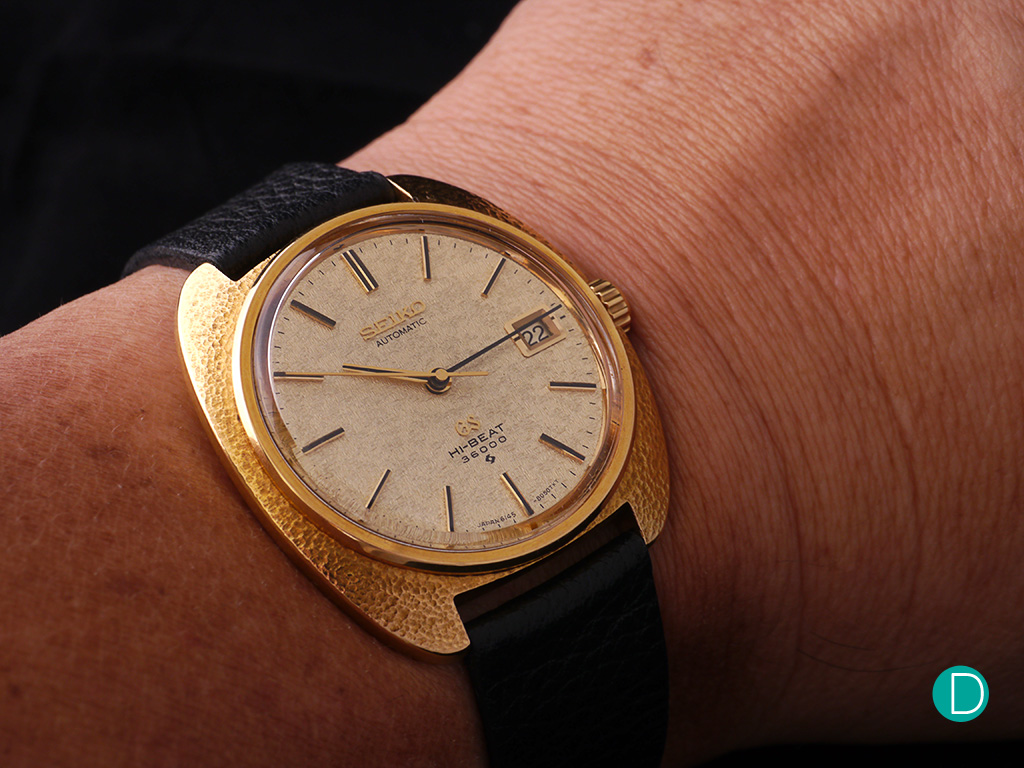 All in all, I can safely say that this truly love at first sight. I am a proud owner of a vintage Grand Seiko that exhibits numerous artisanal achievements and houses a signature movement that has worked for decades (with more decades to come). There’s no knowing when you will meet that watch that takes your breath away, especially if you frequent second hand shops that don’t keep online catalogues. Honestly, that’s usually where the good stuff are. Now please excuse me as I have to go take more photographs of the starlight dial.