The Maison of Parmigiani Fleurier, in this year’s SIHH, decides to look back at their current line-up to improve their watches.

It is indeed difficult to improve something that is already perfect. But Parmigiani had different ideas. In SIHH 2017, the Fleurier-based watchmaker had introduced new models for six different collections – each covering a different style with different complications. The Toric Chronometre. Simple, yet elegant.

We start off with one of our favourite pieces from Parmigiani in this year’s SIHH: the classy and simple Toric Chronomètre.

The watch, notably, is the first timepiece designed by Michel Parmigiani himself. It is inspired by columns of Ancient Greece, with the patterns derived from gadroons and knurling. It comes with a redesigned case and curve lugs, as well as a new Arabic dial that comes in either black opaline or white grained version. Powered by the in-house calibre PF331, the self-winding movement boasts a date indicator and a power reserve of around 55 hours. The 40.8mm watch will be available in either red or white gold, and paired with an Hermès alligator strap. The Metrographe, with a new look.

There are a few updates for the Tonda collection. The Métrographe, as mentioned is this article, comes with some subtle changes aesthetically. It is now available in two dial colour variants (black and white), with some changes to the sub-dial design and the inclusion of a tachymeter. 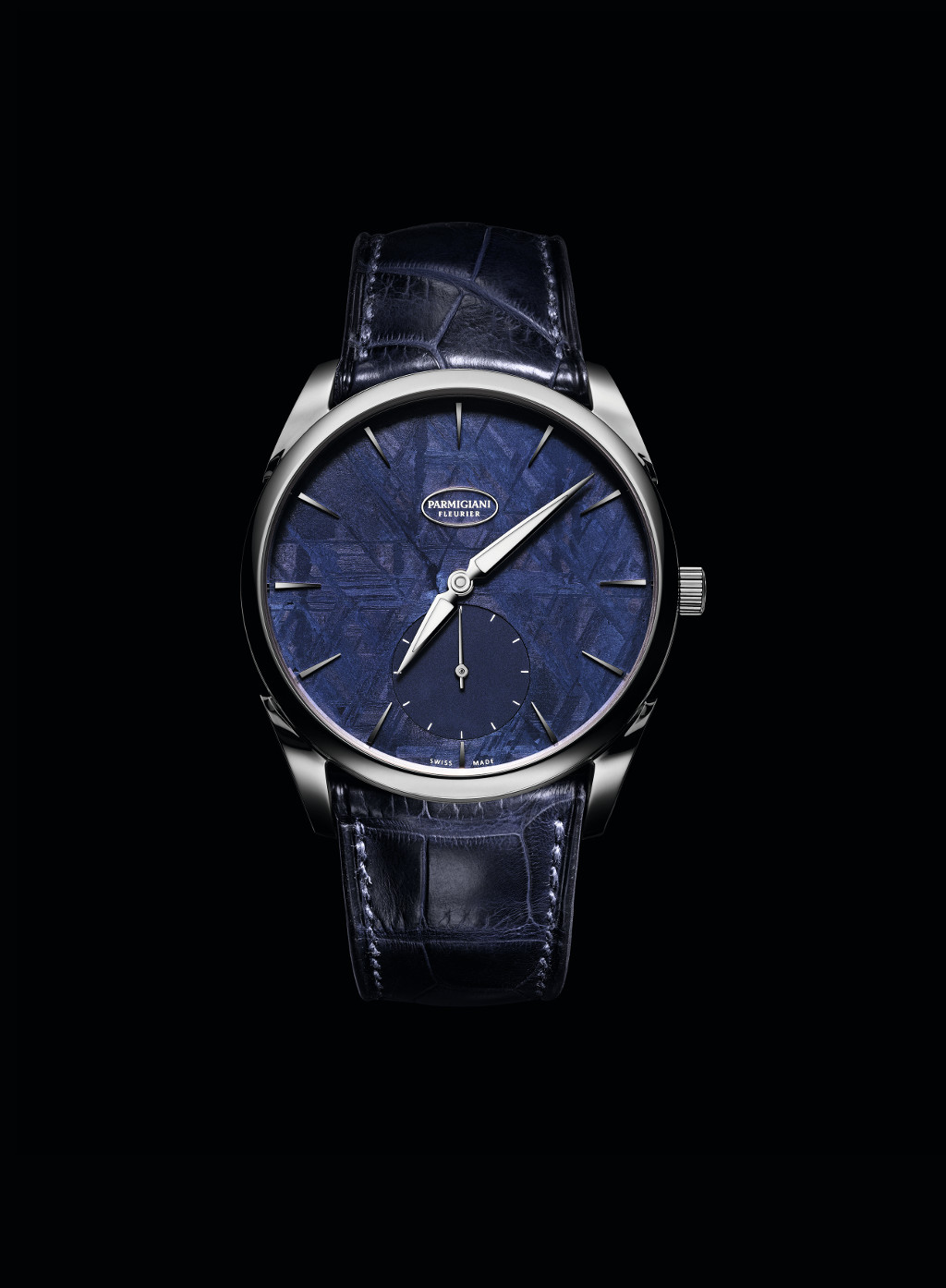 As for the Tonda 1950, there are several inclusions into the collection as well. The elegant ultra-thin watch is now available in stainless steel with either a black or white dial. In addition, there is also a Meteorite dial version. The titanium watch is available in three different forms – each with a different dial colour. The latest creation, notably, features a stone that is sourced from Sweden. The manufacturer had also launched two other models with meteorite dial: one with an abyss blue dial, and a black dial as well. The Bugatti inspired timepiece. Interestingly, with a tinge of sportiness.

The watch, as the name suggests, is inspired by one of Jean Bugatti’s design: the Bugatti Aérolithe. The car was created in 1935 from a highly flammable magnesium alloy, with its body joined by an ingenious riveted dorsal seam.

Parmigiani had incorporated elements of motorcars and racing into the titanium timepiece. The black textured dial, for instance, features the signature colours of Bugatti – red and blue. It also has a double tachometer, to measure speed in both km/h and mph.

The uber-cool timepiece is 41mm in size, with an interesting lug design that is inspired by the dorsal seam of the car. It is also paired with a calfskin leather strap, with the embossed pattern of the manufacturer’s car seats. The Kalpa XL Hebdomadaire, with a new case and dial combination.

Following the launch of the Anniversaire piece last year, Parmigiani had came up with a rose gold version of the XL Hebdomadaire with a silvered yellow 12-sector flinqué effect dial. The combination aims to complement each elements together, which gives the watch a unique colour scheme.

The tonneau watch is powered by the PF 110, a hand-winding movement that boasts a power reserve of around 8 days. It also features a power reserve indicator, as well as date display. Now, this is an excellent example of a timepiece that works as well as it looks. There are two different novelties from the Ovale collection – which is known for the intriguing retractable hands that are inspired by the oval pocket watches dating back to 1780.

The first one is the Pantographe, which is now available with a barley grain guilloche dial and a rose gold movement. The elegant watch is paired with Hermès strap and rose gold ardillon buckle, with a limited production of a mere 50 pieces. The Ovale Tourbillon, with a stunning blue dial.

Finally, we have the Ovale Tourbillon. The watch now comes with an intense blue “Côtes de Genève” dial, which complements the rose gold case nicely. The blue hue from the dial is done by galvanoplasty, which requires precision and good-timing to ensure the gold dial turns into this exact colour.

For more information, please check out Parmigiani’s website here. Do keep a look out for the hands-on reviews from next week onwards as well!