Servicing of a mechanical object on a grand scale: London’s Big Ben When it comes to servicing of a wristwatch, the usual time between each service is suggested at 5 years.  Some owners may choose to go a much longer period of time as their watch is still keeping reasonable time.  The other factor involved is the cost.  A basic service of a timepiece ranges from three figures to at least five figures depending on the number of additional complications.  What recently caught our eye was the recent issue concerning London’s most famous clock and cultural icon Big Ben.

Technically the nickname “Big Ben” refers to the Great Bell in the clock itself.  The tower itself is named the Elizabeth Tower.  The tower was renamed in 2012 to celebrate the Diamond Jubilee of Elizabeth II.  The name “Big Ben” has gone on to encompass the clock and clock tower.  Big Ben overlooks the Palace Of Westminster.

The world famous clock housed in the Elizabeth Tower, above the Palace of Westminster in London. England. Known to many as Big Ben. Picture (C) Wikipedia

What caught our attention was the proposed cost of urgent maintenance for the clock and its housing.  A report presented quoted a cost of £29.2 million pounds to fix up the clock. If not fixed in one go there is potential for the cost to rise to £40 million.

First some background on the clock itself.

The clock and its four dials were designed by Augustus Pugin. The clock dials are set in an iron frame 23 feet (7.0 m) in diameter, supporting 312 pieces of opal glass, rather like a stained-glass window. Some of the glass pieces may be removed for inspection of the hands. The surround of the dials is gilded. At the base of each clock dial in gilt letters is the Latin inscription: 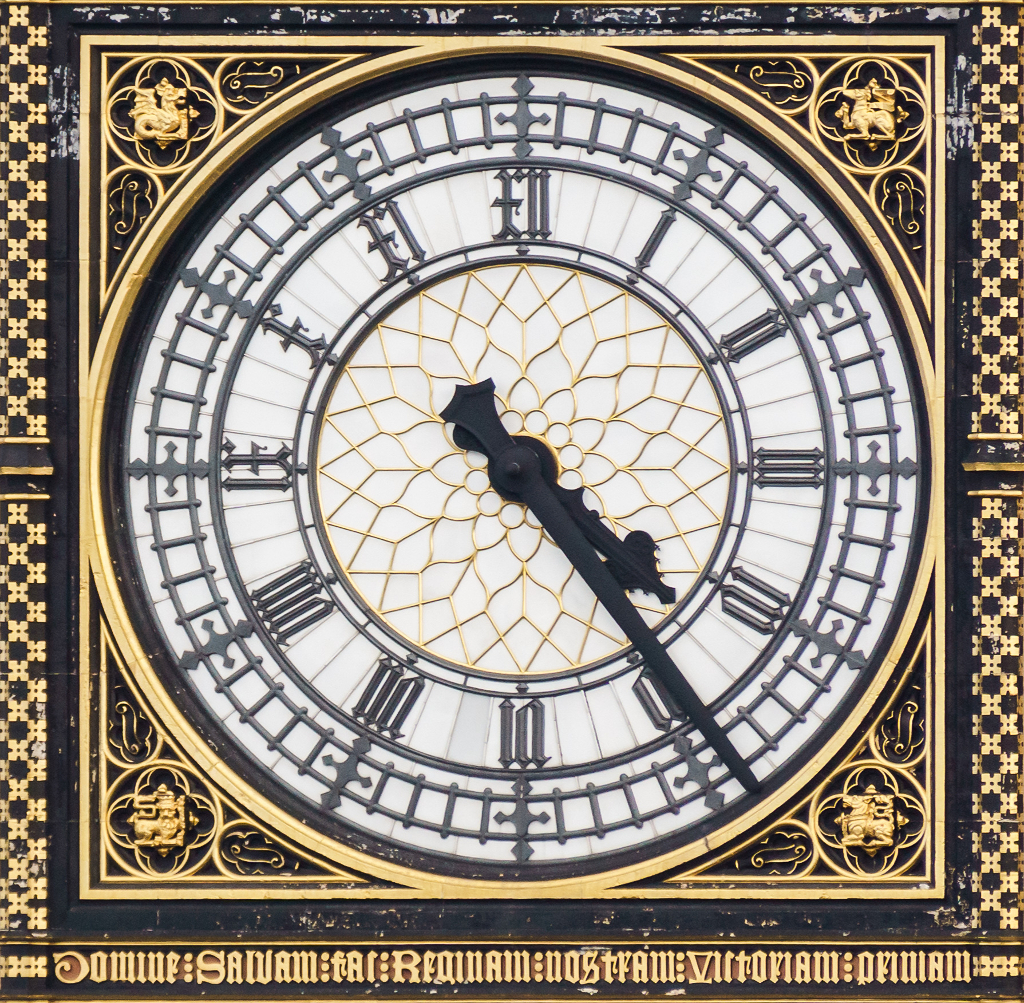 One of the four dials of Big Ben, with Roman Numerals for the hours. Picture (C) Wikipedia

The movement for the clock was completed in 1854.  This makes it 156 years old.   The clock utilizes a double three-legged gravity escapement created by lawyer and amateur horologist Edmund Beckett Denison.  This escapement provides the best separation between pendulum and clock mechanism. The pendulum is installed within an enclosed windproof box beneath the clockroom. It is 13 feet (4.0 m) long, weighs 660 pounds (300 kg), suspended on a strip of spring steel 1/64 inch in thickness, and beats every 2 seconds. The clockwork mechanism in a room below weighs 5 tons. On top of the pendulum is a small stack of old penny coins; these are to adjust the time of the clock. Adding a coin has the effect of minutely lifting the position of the pendulum’s centre of mass, reducing the effective length of the pendulum rod and hence increasing the rate at which the pendulum swings In addition to the telling of the time, the clock chimes the hours and the quarters.  The Great Bell chimes the hours.  Along with the Great Bell, the belfry houses four quarter bells which play the Westminster Quarters on the quarter hours  The quarter bells play a once-repeating, 20-note sequence of rounds and four changes in the key of E major: 1–4 at quarter past, 5–12 at half past, 13–20 and 1–4 at quarter to, and 5–20 on the hour (which sounds 25 seconds before the main bell tolls the hour).

As it is one big mechanical structure, there is bound to be wear and tear.   Over the years, the clock has been shut down for maintenance to repair the mechanisms for the both the time and the chimes.

Most recently in August of this year, the clock was discovered to be running 7 seconds fast.

As quoted in the Guardian Steven Jaggs, the keeper of the great clock pointed out “This is a mechanical clock,” “It’s not digital, it’s not electronic. It does take a lot of love and care.”

We love this quote, as we feel a mechanical movement has a soul, with its moving parts working in tandem to keep the time.  Clocksmiths climb the 334 stairs of the Elizabeth Tower three times a week to wind the clock, whose timing can be affected by the weather, atmospheric pressure and being 156 years old.

When a wristwatch is sent in for servicing,  usually it is for two items.  A full movement service and a light polishing of the case.  The movement of the watch is taken apart, cleaned and parts re lubricated then cased back up. If needed worn parts are replaced. The time for servicing for the movement varies depending on how many complications the movement has such as a chronograph, perpetual calendar or minute repeater.  The case of the watch has its nice showroom look restored by polishing.

In the case of Big Ben the clock’s “case” and “movement” need a major service urgently.

For an iconic clock like Big Ben, you could say its case is the tower in which it sits.  Repairing any defects that have built up over time in the tower will be quite a task, considering works have to be carried out both on the inside and outside of the tower. The hands on each of the four dials also are in need of repair.  There is a possibility they could drop off.  Which is not good considering the 9ft gunmetal hour hands weigh 660 pounds.

The movement itself is also in need of some TLC, to repair parts of the pendulum and the rest of the mechanism which have been worn down over time. The estimated time frame to repair the iconic clock? Approximately 4 months.  For a clock of its size, 4 months would be quite remarkable considering how high up it is, the manpower involved and the parts needed for the movement and dials.

Who says servicing isn’t important? Keep that in mind if the service center says there is a lot of wear and tear in your timepiece that hasn’t been serviced in 10 years.  The work that will need to be carried out will not be as monumental as London’s most famous clock but will keep your watch going for another 10 years!

Posted In
News
Tags
Big BenClockLondon
Big Ben, Clock, London
What's your reaction?
I Love It
100%
Cool
0%
It's OK
0%
What?
0%
I Hate It
0%
like
You might also like
New Release: MB&F adds another robot to its line-up with L’Epée: Introducing Grant
New Release: The Fifth Element by MB&F – A Horological Masterpiece