The El Primero from Zenith have had an illustrious career as an automatic chronograph of choice for many. It continues to be a mainstay movement used by Zenith today, but under Jean-Claude Biver’s leadership, the brand has claimed to have the answer to the next generation El Primero. Enter the El Primero 21. What is new? Is it groundbreaking? What is the significance? We examine these questions, and more in this detailed review of the new Zenith Defy El Primero 21. The version with a silvered dial with black sub-dials seems to be one which is most attractive to our conservative eyes.

From 1969, Zenith has been claimed the crown of the chronograph king with the El Primero (meaning ‘the first’ in Esperanto). The movement makes its case by having an integrated automatic column-wheel mechanism beating at the high frequency of 36,000 vibrations/hour (5Hz). The movement has a chronometer-certified tenth of a second precision. It was a star in the day, being used as an ebauche by many other manufacturers from Movado to TAG Heuer and Ebel. Even Rolex used it as a base for its C.4030, although the Rolex implementation uses Rolex’s own escapement which was tuned down to run at 28,800 bph. A classical interpretation of the El Primero in a Zenith, one of many watches in the collection to feature the chronograph movement.

And a whole slew of Zenith watches carry the El Primero as the movement. Many caps on the movement, but it is beginning to show its age, as no new innovations have been implemented in the movement. So it is with some measure of interest that JC Biver announced to a crowded Press Conference at Baselworld 2017, that they are improving the El Primero. How? Bu supercharging its performance. The new Defy El Primero 21 is now capable of displaying 1/100th of a second by the central hand which is driven by an escapement running at 50 Hz (360,000 bph).

All three versions look well balanced, and aesthetically pleasing to the eye. The case is a rather substantial 44mm in diameter and 14.5mm high, but the design is sleek and it manages not to look bulky. The choice of titanium or aluminium as the case material ensures that the watch feels light and comfortable on the wrist. The crown is  fluted with rectangular chronograph pushers works well aesthetically with the case with its short lugs. The case finish is an alternating brushed and satin finishing The dial layout is typical of Zenith. With subdials located at 3/6/9 position, giving the dial a stable, grounded look. A power reserve indicator is displayed above the center pinon below 12. The classic El Primero 3/6/9 layout is retained. But on the El Primero 21, the design calls for the small seconds at 9 o’clock, a 30-minute counter at 3 o’clock, seconds and tenths of a second at 6, and a 100th of a second central chronograph hand sweeping around a scale on the circumference, The dial layout stays true to the classic El Primero with subcounters at 3/6/9.

While the dial on the solid dialed version is quite sober, Zenith has let their artistic muse on a leash which is less tight on the open worked dial versions. 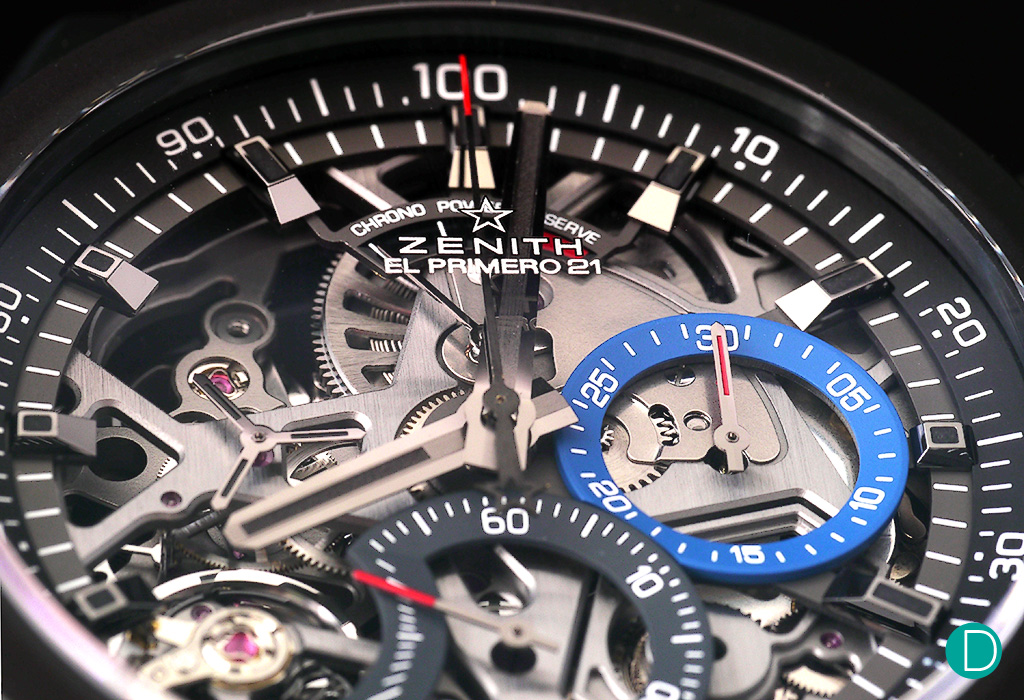 Closeup on the open worked dial. The movement is visible through the dial in these versions. Both escapements are also visible at 8 and 10.

The use of colour to highlight the open worked dial for better legibility is credible. We also like the Zenith logo being printed on the under side of the sapphire glass in the models with open worked dials. The El Primero 21 features two trains. a regular wheel train beating at 36,000 bph which runs the timekeeping functions, and another with a separate escape wheel which starts only when the chronograph is activated. This second train runs at 360,000 bph, and allows the watch to resolve to 1/100th of a second. The El Primero 21 movement, featuring a large Zenith Star on the automatic rotor.

When activated, the chronograph second hand runs at a furious 1 revolution every second. As the train which powers this hand runs on an escapement beating 360,000 bph, this hand makes 100 discrete steps every revolution. To the naked eye, these small steps, each 3.6° arc is not discernable, and the hand looks like it is moving smoothly across the dial. When stopped, it is then able to rest in any of the 100 positions, giving the 1/100th second resolution.

The movement uses three heart shaped cams in the chronograph mechanism, controlled a cam mechanism. The traditional column wheel is ditched. But Biver sells this as an advantage, and an innovation by calling it, “starter mechanism, ensuring simultaneous resetting of the seconds as well as tenths and hundredths of a second.”

The El Primero 21 movement is made at the Zenith facilities in Le Locle, and uses its own patented balance-springs. A new patented material in the form of Carbon-Matrix Carbon Nanotube composite is used. The material is claimed to be impervious to effects of gravity, temperature and magnetism.

The exceptional physical and mechanical properties of this balance-spring with its graphene matrix render it insensitive to temperature and to the influence of magnetic fields, well beyond the known 15,000 Gauss standard, thereby guaranteeing peerless precision in all conditions of use.

The movement finishing is not haute horologie levels, but is typical of Zenith. We would describe the finishing as adequate, but with a good eye to aesthetics. A good level of engineering finish. The movement looks very nice from the display case back, as well as through the open worked dial for two of the models.

The Defy El Primero is keenly priced at S$ 15,100 for the solid dial titanium case, S$ 16,600 for the open dial with titanium case and S$ 18,000 for the ceramicised aluminium case with open worked dial. Eminently fair pricing, in our view. The competition which offer 1/100th or higher chronograph resolution are priced considerably more. We suggest three other occupants in this rarefied landscape:

The closest is perhaps stable mate TAG Heuer Carerra Mikrograph (in titanium US$ 21,000). The dial layout looks very similar to the El Primero 21. However, the TAG runs on 28,800 bph base train with the chronograph train at 360,000 bph. The power reserve is 42 hours instead of 50 hours for the watch and 90 minutes for the chronograph instead of 50 minutes. JC Biver hinted that the C.9004 was co-developed with Hublot and TAG. This may explain the dial layout similarities, but Zenith did not just take the Mikrograph as is, but made their own modifications to call it their own. Furthermore, the Zenith is priced lower than the TAG.

Another inhabitant on the competitive landscape that comes to mind is the Montblanc Timewalker Chronograph 1000 ( € 175,000, limited edition 18 pieces, black DLC titanium case) announced in this year’s SIHH 2017. The movement and its concept is actually been introduced earlier by Montblanc in the  TimeWriter II Chronograph Bi-Fréquence 1000 in 2012. The concept is the same, two trains. One running at 18,000 bph (half the speed of the El Primero 21), and the chronograph module running at 360,000 bph. The Montblanc goes one up, with a system to interpolate to provide a final resolution of 1/1000th of a second.

The other chronograph which makes its claim to 1/100th of a second resolution capability is the F. P. Journe Centigraphe Souverain (approximately CHF 62,000 in a gold case)  The Journe caliber does not use twin trains, but rather depend on the single train similar to a standard chronograph, but uses a interpolation method, similar to the Montblanc to resolve to 1/100th of a second from its base train beating at 21,600 bph.

The new El Primero 21 is a statement made by JC Biver as he takes the reign of Zenith. Having dismissed the former CEO Aldo Magada, he is out to prove that his capabilities go beyond Blancpain, Omega, Hublot and TAG. Biver, now 69 years old, is keen to leave his heritage with Zenith. Barely six months after his takeover, the El Primero 21 burst into the scene. Though not earth shattering technology, the El Primero 21 makes its mark as the next step forward for Zenith. A Zenith who have laid on the El Primero laurels for way too long (since 1969). This is the jump start for the next generation. On the wrist, the silver dialed version is sober and looks every part of a gentleman’s outfit.

Biver makes no mistake with the aesthetics. The watches are beautiful. He makes no mistake in the movement, sometimes with tall claims, but backs it up with a movement which looks like it will prove to be solid and reliable. The El Primero 21 is also remarkable for setting a new price level for the 1/100th of a second chronograph.

Biver promised more surprises to come from Zenith this year, even boasting that they have made a discovery which he has submitted to the Nobel Committee for a prize. He has once again proven his mastery in ability to communication. But will any advancement in timekeeping win a Nobel Prize? We doubt, but the rhetoric is one which is familiar from the dynamic and charismatic Biver. And we can only wait to see what is coming. For now, some of our internal souces tell us the next Zenith is likely to be time only. So we await.