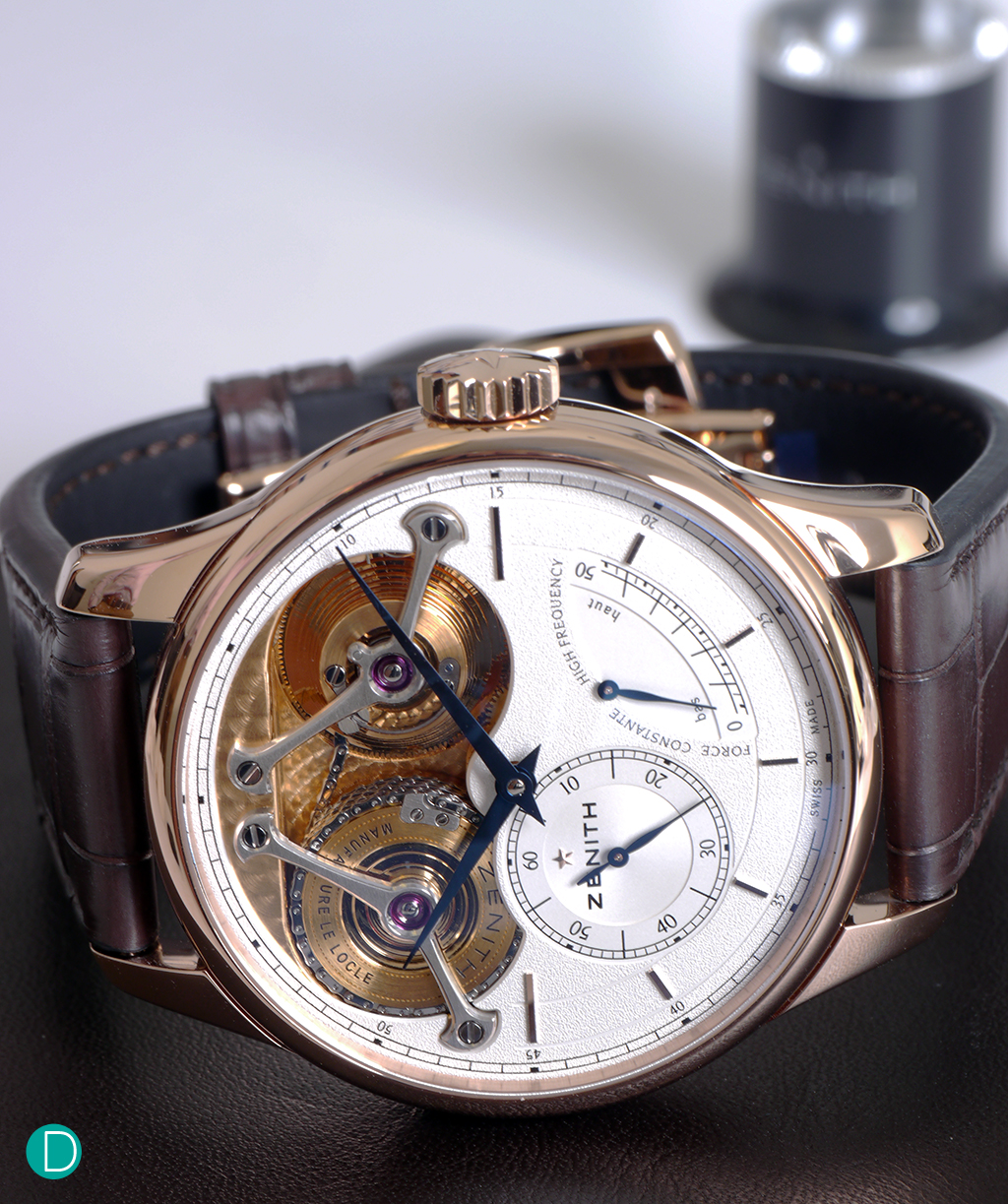 At first look, the watch is visually impressive, with a very large cut out to show part of the movement. This large cutout in the dial makes the watch stand out. Typically dials feature a cut out to reveal a tourbillon, but in the case of the Academy, it reveals something far more rare: a  fusée and chain. Two magnificently polished bridges, hold the system in place, and stretching from one side to the other is the beautifully polished chain.
The layout and the aesthetic proportions of the relationship between the components of the dial is very pleasing. The dial itself has a very interesting texture which contrasts nicely to the polished bridges and applique markers. The dial is a rather beautiful, white textured surface. The cutouts prominently show the fusee and chain and the mainspring barrel.

Two standout features set this watch aside as something special.The first necessitating the use of the second.
The High Beat movement
The first standout feature of this watch is the use of a 36,000 bph movement. This is quite common in Zenith watches, the most famous of which, their El Primero Chronograph movement utilizes this frequency. The high beat allows the movement to be more stable as the inertia in the balance to continue in its beat is higher. The negatives of using a high beat movement are that the lubrication tends to be less stable and secondly, the energy requirements are larger. Zenith have over the years mastered the savoir faire needed for the lubrication issue, and solved the second problem with a larger mainspring. The movement side. The movement is in a traditional gilt finished. The transmission wheels to the base of the fusée and the bridges for the fifth wheel and balance appear to be made from maillechort. These provide a visual contrast and are polished.
Finishing is quite good, with chamfering for the screws and jewel points which are in gold chatons. Note the sharp edges of the main plate and the nicely executed anglage on the plate’s edge. Of note also is the opening for the click and the massive click spring.

A larger, more powerful mainspring brings issues of its own. The mainspring discharges its torque over time in accordance to Hooke’s Law. When the barrel is fully wound, the torque discharged into the movement train is high. As the barrel unwinds, the torque reduces, resulting in an uneven torque being delivered into the movement train. The larger the mainspring, the larger the difference from max torque when fully wound to min torque when fully unwound. As the torque changes, the rate in which the escapement beats may also change correspondingly. Further, when fully wound, a large mainspring may be so powerful, that the escapement banks, and does not keep a regular beat.
Hence, for very large mainsprings, a method of equalizing out the torque is needed. Here is where the second standout feature of this watch comes into play. The fusee, fully wound. Note the chain is magnificently made, each link polished. Note also, at the center of the fusée’s apex, is the maintaining power mechanism. This mechanism allows torque from the mainspring to continue to be delivered to the movement train when the user is winding the watch. When the watch is being wound, the chain traverses from the bottom to the apex, and in an opposite direction to when it is discharging. Without the maintaining power mechanism, the movement will be forced into reverse.

The Fusée and chain system

Two methods have been favoured by watchmakers over the centuries to provide a constant force to the escapement. The first is the fusée and chain, and the second is to incorporate a remontoir d’égalité mechanism into the train. Zenith decided to use the fusée and chain system in the Academy. This is more straightforward method, and rather common feature in pocket watches from circa 1850-1920.
The method is very effective, with the fusée acting like gearing: increasing the torque delivered to the train as the power from the spring wanes. As the mainspring torque wanes when the mainspring discharges, the chain traverses the fusée from its apex when the mainspring is fully wound, to the larger base. The shape of the fusee is calculated to precisely offset the torque changes. This allows the mainspring torque to be equalized as it is delivered to the movement train.
The chain itself is a challenge to manufacture: Detail of the Zenith chain.

Construction is much alike a bicycle chain. As shown in the photograph above, the links are rivetted to the each other. This presents a special problem as the chain needs to be flexible enough to coil itself around the fusée and barrel, but rigid enough so that the power is transferred efficiently, This problem is described by watchmakers as libre san jeux. And requires special techniques to solve the problem. These special techniques are beyond the scope of this article, but the author has written at length about it in his book: “A. Lange & Söhne: The Pour le Mérite Collection”. 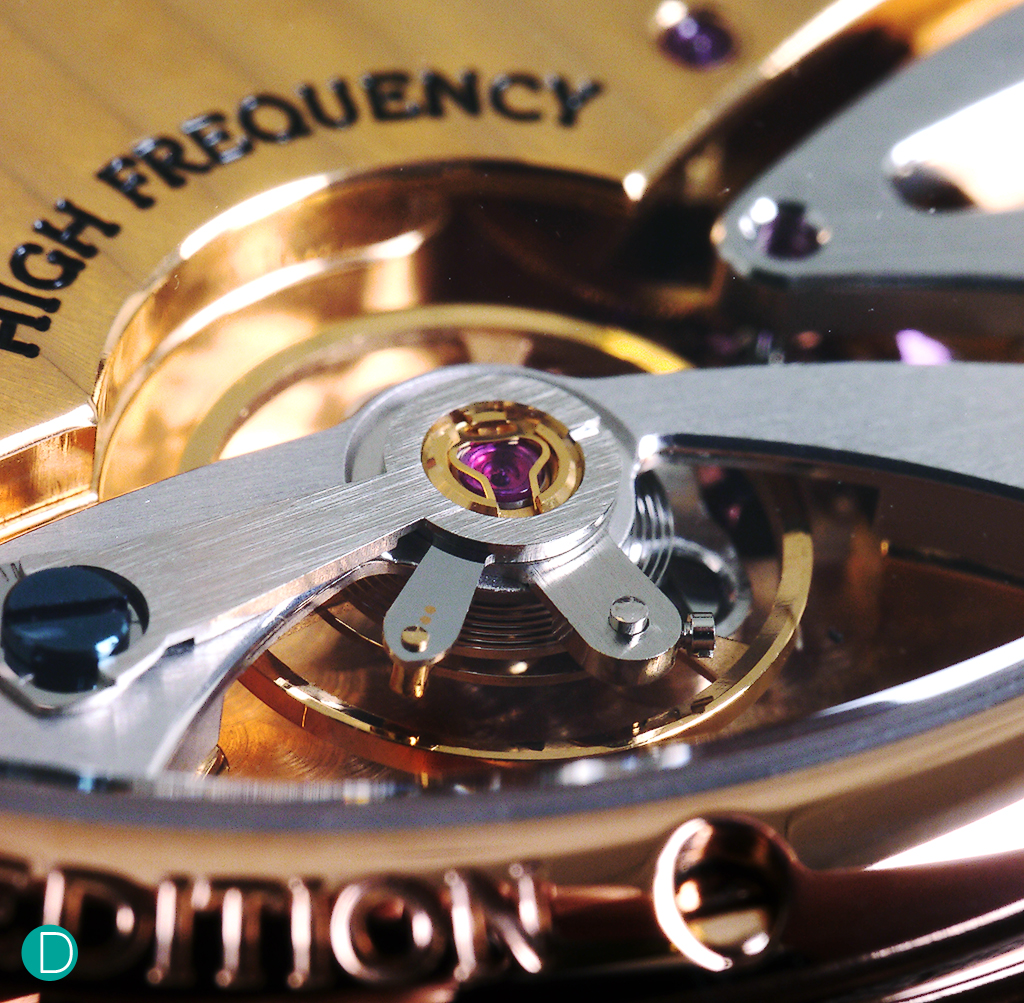 Detail of the bridge holding the balance. We particularly love the curved design. Note the parachute like device, held by a blued screw over the KIF equipped end stone. The execution of the plate opening to the bridge is top notch. Note the beautiful gleaming edges of the anglaged sides of the bridge below the engraving “HIGH FREQUENCY”. On the other hand, the bridge, though nicely executed, seem to be lacking anglage and it appears the edge finish of the bridges are left a bit natural. The escape wheel, blocked by the bridges in this photograph is in silicon. The watch sits very nicely on the wrist. We find the visual impact of the open dial to show the fusée and chain and barrel to be captivating and a key attraction.

Fusée and chain transmission linked to the barrel

Small seconds between 7 and 8 o’clock

Power reserve between 4 and 5 o’clock