Tudor releases a third installment to their highly successful Black Bay collection. Based off a vintage ref 7922 first launched in 1954, the Tudor Heritage Black Bay in black is the third model to be released. The earlier two models were a burgundy red bezel model and a blue bezel model. The Heritage Black Bay watches were an instant hit among collectors for the use of its “Big Crown” mimicking reference 7924 (launched in 1958); and its snowflake hands recall Tudor’s late ’60s to early ’80s vintage models.

So what is it that makes the Tudor Heritage Black Bay collection so successful?

In a conversation with Philippe Peverelli, Managing Director of Tudor, he reminded us of the importance of a brand’s use of its history and how it must create value for money products. In marketing terms, it would be adding a story to a product and finding value proposition. That is exactly what we see in Tudor’s latest collections. Furthermore given today’s internet savvy customers and by extension, their learned consumerism, products have a even higher need to stay competitive. The Tudor Heritage Black Bay fits exactly with this successful product model. It is a product based firmly on Tudor’s rich history and it is a value for money product, looks good and works well at a good price. 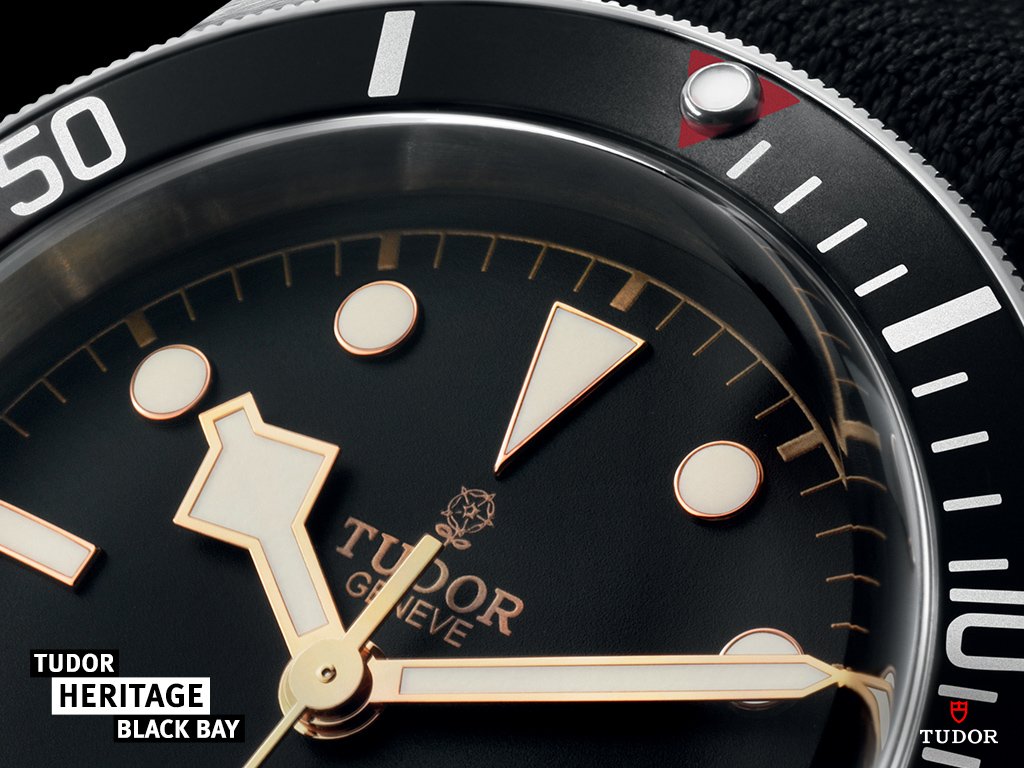 What we loved about the watch:

It feels good on the wrist. Yes, the watch is identical in case construction with the earlier releases and some may pass it off as the usual, but we were still very pleased with how the watch sat on our wrists. The raised sapphire crystal is reminiscent of its vintage inspiration and fitted to the 41 mm watch. All that heft set to a well-crafted stainless steel modern bracelet. While not entirely new, we thought the gilt dial works even better on the all black version than the first burgundy red model. The gilt printing font, hands and markers provided a certain warmth to the dial. On the wrist. The Tudor Heritage Black Bay Black on a fabric strap, traditionally woven on a Jacquard looms machine.

It reminds us of the Rolex 5508. While it is debatable if the Black Bay Black’s similarity to the milsubs is a good thing, we are fans of this ‘homage’. Then again we are very cautious of the way brands deal with homages. What are the similarities? First the obvious red triangle and gilt dial. Yes, some may say its a really tiny detail for such similarities to be drawn, but we thought this is a great touch that reminds collectors of the tightness in relationship both brands share. Furthermore, unlike modern Rolex submariners, the Black Bay Black comes without the crown guard, an even better look alike with vintage milsubs. On a dry suit.

What we thought could have been done better:

Use the new in-house movement. Just like what was done on the Tudor Pelagos in blue, the new Black Bay could have been even more special if it had used the new Manufacture TUDOR MT5612 movement. For starters, it would propel the watch from a run-off-the-mill status with an ETA movement to an in-house. That is a major nominal upgrade. But more than that, the new TUDOR movement has a ~70 hours power reserve as compared to the 38 hours on the Eta 2824. Then again, this is from the viewpoint of a potential customer. The point of view of the seller is probably different. Unnervingly, we have heard some “Apple-type-critics” quelling for a more impressive upgrade, demanding more watch than just a paint job. The new Tudor Heritage Black Bay Black is as per the earlier models, available in leather or steel bracelet. Both versions come with a complimentary fabric strap.

The watch looks very pleasing to the eyes. It has the looks, history and a certain versatility for both sportiness and classicism. Ticking all of our boxes for a watch to collect, we highly recommend the Black Bay Black as a serious timepiece for any new collector looking to start his collection, and a fun timepiece for a seasoned collector craving a new beater. The watch is priced in Singapore at S$4248 in leather strap and S$4680 in steel bracelet.

Waterproof: Up to 200 meters