Throwback Sundays: Six Definitive Watches of 2019, from Our Archives
Previous
RANDOM
Year in review: Top 10 posts of 2019
Next 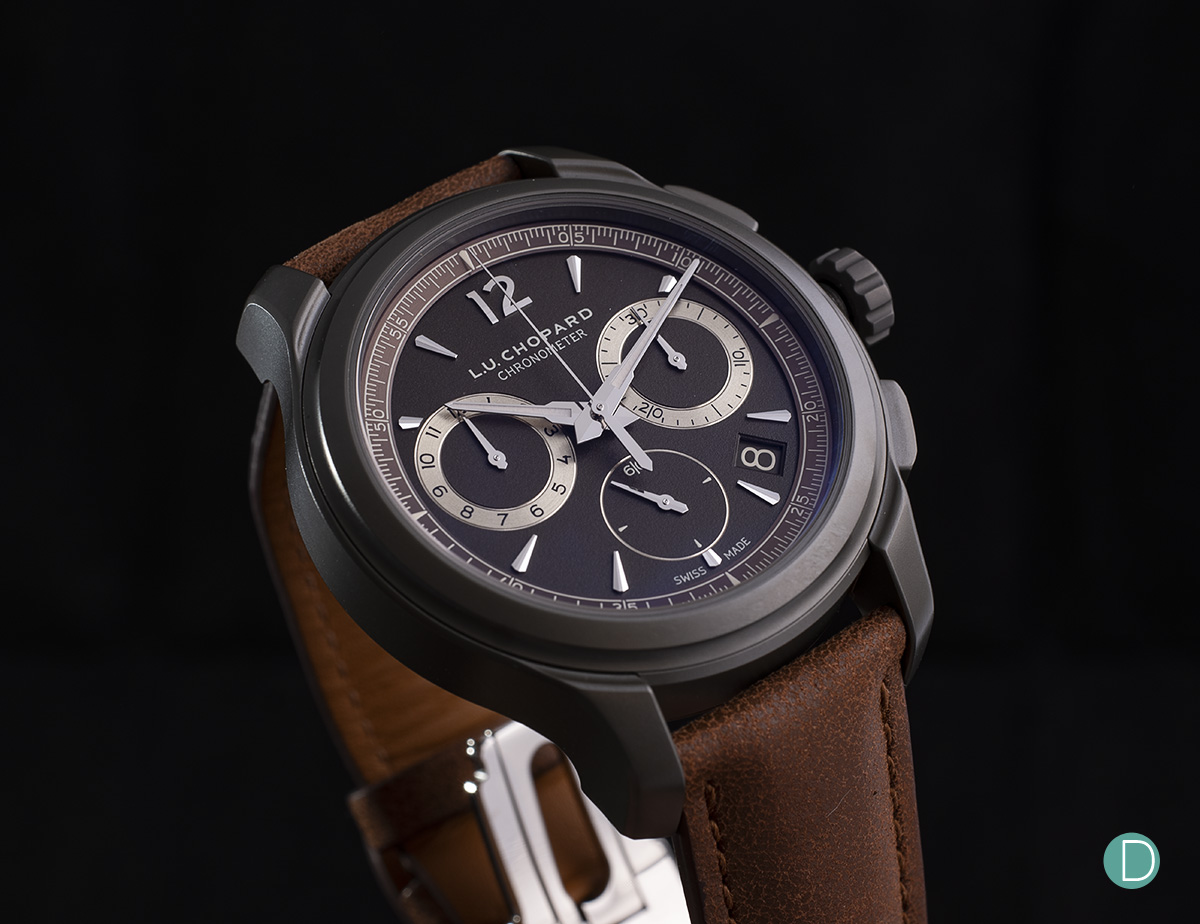 The new Chrono One Flyback debuts in two materials: stainless steel and interestingly, ‘Titalyt’, a material where titanium has been subjected to electro-plasma oxidation to improve its wear- and corrosion-resistance. In stark contrast, the preceding L.U.C Chrono One variants were all crafted in precious metal, but this isn’t the only point of difference between the two chronograph references. The Chrono One Flyback also features a smaller case. At 42 mm x 13. 42 mm, the watch is easily wearable by those with average-sized wrists. This is in contrast to the old model which measured 44 mm x 14.06 mm. On paper, this discrepancy may not seem like a lot, but in practice, it makes a whole world of difference. Sure, some watches look great oversized (e.g. the Royal Oak Offshore, or the IWC Big Pilot), but the Chrono One Flyback simply isn’t one of those watches. The case downsize is therefore a wise move, in our eyes.

The dial of the L.U.C Chrono One Flyback welcomes aesthetic details shared across the entire L.U.C collection: the dauphine fusee-type hands with Superluminova, the faceted arrow-shaped applied hour markers, the slender understated fonts, along with the L.U. CHOPARD marquee at the 12 o’clock position. In the stainless steel version of the watch, the dial is grey with a fine vertical satin-brushed motif. The result is chic, relaxed, and industrial. Meanwhile, in the Titalyt version, the emphasis is on sports and masculine pursuits, with a play on colours that is entirely new to the L.U.C collection. The dial is military green, punctuated by steel grey hour-markers, hands and counter rims.

Where the Chrono One Flyback differs from the Chrono One on the dial is in sub-counter design, and the use of arrow-shaped indices instead of Roman numerals for the hours. The dial design of the former is objectively more relaxed and minimalist than that of the latter. But that doesn’t mean that the old Chrono One was poorly designed – not at all. It had its own charm that some would prefer, and so in the end, it really is down to individual taste.

Driving the Chrono One Flyback is the 359-part, 45-jewel Calibre 03.03-L. The in-house, self-winding movement has a commendable power reserve of 60 hours and operates at a modern 4 Hz beat rate. It boasts COSC certification, which ensures its precision. The Calibre 03.03-L broadly features two complications: the chronograph, and the date. The former is actuated by two pushers on the flank of the case. The push action on said pushers is soft yet assuring, and provides a feel of quality under the finger tips. As its name implies, the Chrono One Flyback chronograph features a flyback function enabling it to measure short times in quick succession by allowing the wearer to zero-reset the counters at a single press. The date display is located between the 4 and 5 o’clock markers on the dial-side. Date displays have been, and will forever continue to be, a hotly debated subject in watch enthusiasm. Many will likely find its placement, orientation, or even its mere presence on the Chrono One Flyback to be revolting. Indeed, while it does adulterate the purity of a dial, one cannot deny the practicality of a date display – it remains one of the few truly useful complications in modern horology.

When it comes to finissage, one can always trust that it is well-taken care of in an L.U.C timepiece. It is worth mentioning however that while many of its siblings parade one of, or both the Hallmark of Geneva and/or the Fleurier Quality Foundation certifications, the Calibre 03.03-L has none. This is almost certainly more a sign of the age of the movement than apathy from the manufacture. Nevertheless, the movement is still beautifully finished, as evidenced by the view through the case back. The top surface of the bridges are adorned with highly textural and even Geneva waves while their edges have been expertly chamfered and polished. Meanwhile, the screw heads have been black polished, the base plate circular grained, and the 22k gold rotor openworked for a better view of the movement behind it.

In this male-dominated hobby, the masculinity of the chronograph, and its association with sports and science makes it one of watchmaking’s most in-demand complications. This also means that every watch manufacturer and their mothers have at least one chronograph reference in their arsenal. Fine chronographs are, fortunately, a less common affair and tend to be exceptionally well-made. The Chrono One Flyback is one such example. The stainless steel version – limited to 250 pieces – retails at CHF26,100 (SGD36,000) while the Titalyt version – limited to 100 pieces – goes for CHF28,200 (SGD38,900). These are high prices, but if it’s any consolation, a well-tuned chronograph is one of the most difficult complications to assemble (yes, even more so than a tourbillon). The good news for consumers, is that if you don’t like a certain chronograph watch, go look for another, as there are plenty to choose from.

Looking for a worthy alternative to the Chrono One Flyback is not exactly a mindlessly easy task. As it turns out, not every fine chronograph has flyback function. Nevertheless, we find the Carl F. Bucherer Manero Flyback to be fair game. In terms of functionality, the two watches are similar – both are flyback chronographs with a date display. That said, the Manero Flyback only times events that lasts up to 30 minutes, while the Chrono One Flyback can go on for 12 hours. The other major difference between the two timepieces is in the movement. The Calibre CFB1970 is neither in-house (albeit significantly modified) nor as painstakingly finished. But that’s okay, because the watch is priced to reflect this; the Manero Flyback is set at an enticing USD8,700 in stainless steel – three times less than the Chrono One Flyback.

On the other end of the spectrum, there are watches like the A. Lange & Söhne 1815 Chronograph that take it to the next, hallowed level. The watch is perfect for anyone looking for a flyback chronograph with no date on the dial that also doubles as a dress watch. In addition, the 1815 Chronograph is powered by the famed ‘Datograph movement’. The Calibre L951.5 is not only picturesque in architecture, but also exceedingly well-finished, beyond even the Chrono One Flyback. Of course, such excellence comes at a price: EUR51,000 (or SGD70,400) to be exact. After all is said and done, it truly comes down to one’s budget and personal taste. Chronographs are fairly ubiquitous, so there’s plenty to choose from as we have mentioned previously.

It is not the most prominent chronograph timepiece in high horology, but the Chrono One Flyback delivers a lot of watch for its pricing. The watch is perfect for those who wants a pragmatic and contemporary chronograph with fine craftsmanship. Through the L.U.C collection, Chopard continues to show the watchmaking it is capable of – not that this multi-GPHG award winning brand needs to prove anything.