The perpetual calendar chronograph is the face of complicated watchmaking at Patek Philippe. First introduced in 2011, the Ref. 5270 is part of a long, illustrious line of perpetual calendar chronographs produced by watchmaking’s most revered maison. This year, the reference receives a royal makeover that will break even the most seasoned of connoisseurs: a platinum case and yes, a salmon dial. Here, we take a look at the new Patek Philippe Ref. 5270P-001. For the first time, the Ref. 5270 comes in a platinum case; all previous models have been crafted in gold. Platinum Patek Philippe watches are generally more coveted by collectors than its gold counterparts, and auction results back this notion. Endowing the Ref. 5270 with a platinum case introduces an air of regality to it and will serve to add desirability for the watch. Material aside, the case remains largely unchanged in dimensions and design; the only difference is that it now comes with a diamond set between the bottom lugs, the tell-tale sign of a platinum Patek Philippe timepiece. How to tell if a Patek Philippe timepiece is platinum? Check between the lugs.

Matching the opulent platinum case of the Ref. 5270P-001 is a heavenly salmon-coloured dial. Salmon dials are typically reserved for exclusive Patek Philippe pieces (hence why they are so desired by collectors) – to see it on the Ref. 5270 is interesting. Suffice to say, it has successfully diverted heaps of positive attention from the media, collectors and enthusiasts onto the Ref. 5270, a reference that has been living in the shadow of its predecessor, the Ref. 5970, for so long. The salmon colour, or ‘golden opaline’ in Patek speak, has a deep warmth to it and goes extremely well with the blackened gold elements on the dial. This is not the first time blackened gold was used in the Ref. 5270, but it is the first time that the hours are marked by Arabic numerals instead of stick indices. The use of Arabic numerals (in the style of those found on the Ref. 5070) results in a less streamlined look than before but gives the watch more character. The layout for the displays remain unchanged: small seconds at 9 o’clock, day and month at 12 o’clock, chronograph minutes at 3 o’clock, date and moon phase at 6 o’clock with the day/night and leap year indicators on the left and right, respectively.

Apart from the aforementioned, nothing else on the dial has changed. It’s still got the same feuille hour and minute hands, the same dial layout and the same typography – Patek Philippe knows better than to mess with a winning formula.

The Ref. 5270P-001 is powered by the same movement used in previous versions of the reference: the Calibre CH29-535 PS Q. For Patek Philippe, the creation of the 456-part, 33-jewel Calibre CH29-535 PS Q signified the end of the manufacturer’s dependence on Lemania-based movements for its perpetual calendar chronographs. The in-house developed and manufactured movement is manually wound (as it should be) and has a power reserve of 55 to 65 hours with the chronograph disengaged. The column wheel/lateral clutch chronograph movement utilises Patek’s own Gyromax® balance and beats at a modern 4 Hz. Actuation of the chronograph start/stop and reset functions is crisp and provides immense tactile pleasure. Unbeknownst to many, the CH29-535 PS Q is packed with patented Patek Philippe innovations (no less than six of them) that eliminate hand jitters, improve efficiency and reduce wear. The movement is perhaps the most advanced of traditionally built chronograph movements, even today – a real technical achievement. As with most movements with the perpetual calendar function, the perpetual calendar module is hidden from view and lives just under the dial. The moon phase indicator of the CH29-535 PS Q is extremely precise and deviates from the true lunar cycle by merely one day every 122 years. From an aesthetics point of view, it may not be a Datograph but it is still breathtaking to behold through the sapphire crystal case back.  The edges of the sprawling levers and bridges are bevelled and polished to a sheen. While there are plenty of rounded and external angles, the movement does lack interior angles, which are the hardest to finish. The top surface of the bridges are adorned with Côtes de Genève that span from one bridge to another, while the screw heads and the column wheel cap are immaculately mirror polished. The finishing and decoration of the CH29-535 PS Q is undeniably worthy of the Patek Philippe Seal which also ensures that the rate accuracy of the watch is within -3/+2 seconds per day. All in all, the CH29-535 PS Q scores top points for style and substance even 7 years after its debut. Finishing is highly varied and meticulous on the seen and unseen components of the CH29-535 PS Q.

For the longest of time, the Ref. 5270 has been living under the shadow of the cult-favourite Ref. 5970 – this, despite boasting a technically superior in-house movement. Maybe it’s the design and size of the Ref. 5970 that everybody is hooked on, maybe it’s the nostalgia; watch collecting is after all an emotionally driven game. Prior to the Ref. 5270P, the most outstanding variant of the Ref. 5270 was the Ref. 5270G-019 with its blue dial and strap, but even that could not exorcise the ghosts of the past. If anything, the Patek Philippe community largely considered the Ref. 5270 to be inferior to its predecessor. All that may be about to change with the introduction of the Ref. 5270P-001. The watch was overwhelmingly well-received when it was presented at Baselworld last month and has shone a good light on the unjustly maligned reference. Will Patek’s salmon-dialled wonder finally inject much needed interest and desirability for the Ref. 5270? Only time will tell. What we do know is that the Ref. 5270P-001 is priced at a cool CHF165,000 – an obscene amount, but for a stunning salmon dial Patek, it will probably be worth every penny. 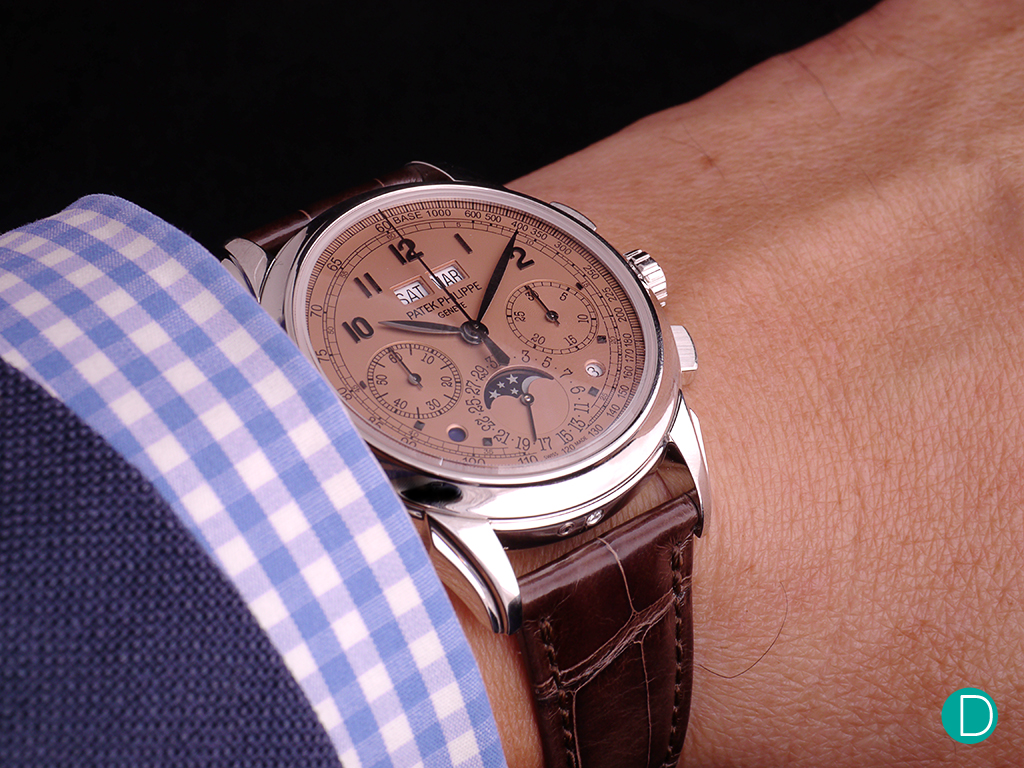 The Ref. 5270P measures a modern 41 mm in diameter but is still a total class act on the wrist.

Few perpetual calendar chronographs in the market can rival Patek Philippe’s, but they certainly do exist. One such specimen is the A. Lange & Söhne Datograph Perpetual. At 41 x 13.5 mm, the Datograph Perpetual is similar in size to the Ref. 5270P. The case, however, is far less nuanced in design compared to the Patek’s. Meanwhile, the dial design is considerably more contemporary than the Ref. 5270 with tones of grey/white/silver/blue, as well as the outsize date. But the Lange misses the mark where it counts: legibility. Thanks to the judicious use of aperture displays, the dial of the Ref. 5270P is less cluttered and more legible than the Datograph Perpetual. That said, the Datograph Perpetual easily makes up for its front-end shortcomings with its exemplary movement, the Calibre L952.1. While not quite as modern and innovative as Patek’s CH29-535 PS Q, the Calibre L952.1 features superior finishing and a more attractive architecture. It is worth noting as well that the movement also has a chronograph flyback function. At about €115,800 or CHF136,600 for the white gold/grey dial version, the Datograph Perpetual costs almost 20% less than the Patek Philippe. The latest iteration of the Datograph Perpetual comes in a white gold case with a grey dial.

The Chopard L.U.C Perpetual Chrono is also worthy of consideration when eyeing high-end perpetual calendar chronographs. The 2017 Chopard flagship timepiece has an austere platinum case but a rather flamboyant dial. At 45 x 15.06 mm in case dimensions, it is the largest of the three and may be unwieldy for some. Unlike the Lange or the Patek, the movement of the L.U.C Perpetual Chrono uses a vertical clutch mechanism; the picturesque architecture that normally comes with horizontal clutch chronograph movements is therefore lost on Chopard’s Calibre 03.10-L. But make no mistake, the Calibre 03.10-L is still finished superbly and regulated to the high standards of the Hallmark of Geneva. Limited to only 20 pieces, the L.U.C Perpetual Chrono in platinum comes at a fairly reasonable price of €101,710 or CHF120,000, almost 30% less than the Patek equivalent. The Perpetual Chrono has been the flagship piece of Chopard’s L.U.C collection since its inception, and for good reason.

A simple dial change hasn’t brought this much hype to Patek Philippe in a long time. Interestingly, the Ref. 5270P is now the only leather-strapped perpetual calendar chronograph left on Patek Philippe’s current catalogue, as the rest have been discontinued. We know that the success of the Ref. 5270P is a given, but does that also translate to better days ahead for the other variants i.e. improvement in sentiment and valuation? For the time being, any guesses are purely speculation. The Ref. 5270 deserves more appreciation for what it is; it may never reach the heights of the Ref. 5970 but it deserves respect, not scorn, from the community.