Name a brand with a historic case of more than half a century’s fame and has had both a Rolex movement and a Unitas 6497 in it. Yours truly, Panerai. In a bid to regain its former glory and emerge as a modern brand, Richemont’s darling, Panerai first recaptured its market with the base pams. Stock, ‘unfinished’ 17 jewel movements with the propensity to orphan its crown. As with any cult brand, people loved it in the beginning, outgrew it and began to move on. With the seeming fad fading off, but with an ample capital resource from its cult years, Panerai is flexing its Italian muscles to the world once more, with its new staple of impressive movements and ‘higher’ quality watches. The 2 watches released at Watches and Wonder 2015 features a new P.1000 movement and comes in a 42 mm case size. We especially like the shrunk down size which makes the watch more palatable for the wrist. Even though its history is in diving watches, and 47 mm cases, this 42 mm variation is clearly a signal that Panerai is transiting from the luxury sports category to the classic watch territory. To some ristis, this might be travesty, but for us, we highly welcome this move by Panerai. The smaller case is made possible by the new P.1000 calibre – entirely made in the Panerai manufacture in Neuchatel – a reliable movement with a large brush-finished bridge covering the major part of the wheelwork and a bridge with two supports firmly holding the balance. The movement beats at a frequency of 4 Hz (28,800 vibrations per hour). Apart from the improved finishing, in-house status, double barrel movement with 3 days power reserve, what we truly like about the new movement is the reset to 0 function on the seconds hand. When the winding crown is pulled out, the balance wheel stops and the seconds hand, rotating in the subdial at 9 o’clock, is resets to zero, so that the watch can be synchronised exactly with the reference time signal. 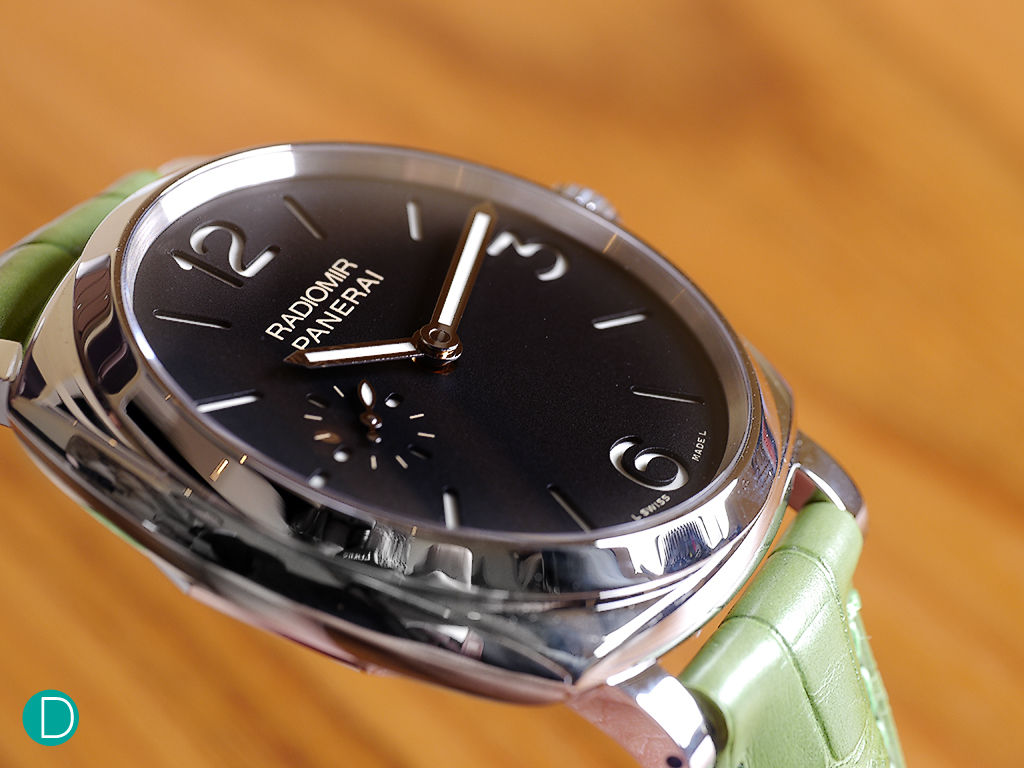 The case comes in two versions, one in steel and the other in red gold. The latter is made of 5NPT red gold, the special gold alloy used by Panerai, which has a high percentage of copper, as well as a small amount of platinum which helps to prevent the precious metal oxidising. The steel version is water resistant to 100 m while the red gold version to 50 m. Similar to previous Panerai radiomirs, both watches come with a sapphire crystal display case back and a sandwich dial with Superluminova on the numerals and hands.

All in all, we thought that the 2 watches released at Watches and Wonders 2015 were an interesting update for any fans of the brand looking for a straight lugs Radiomir. Seemingly flawless in execution, befitting of its category, we struggle to find something negative about the watch. Perhaps only if we had it on the wrist for a period of time can we tell the quality and wear of the timepiece.