Review of the 2015 Sinn 903 Navigation Chronograph The Sinn 903 St B E. The navigation chronograph. So just how did this Navigator make its way into the Sinn family? Is it not just a copy of the Breitling Navitimer? To be dead honest, even the bracelet looks the same. So if it isn’t, then who’s the better of the two?

In our opinion, the Sinn. And here’s why. We feel that its a more honest timepiece. Honest in the sense, that it does what it says it can do, and does it better relative to price. In comparison, the 903 navigation chronograph retails at $3,450 on bracelet or $3,120 on leather strap, just under a third of what its Navitimer counterpart would cost. Sized at 41mm, it is the perfect size for a traditional sports watch, rather than a 46mm Navitimer. Movement wise, yes it uses a stock movement, while the Breitling uses an in-house, but again, its less than a third in price, so no one should fuss about it. We could go on and on about the Sinn 903, but first, let’s address the fat controversy. 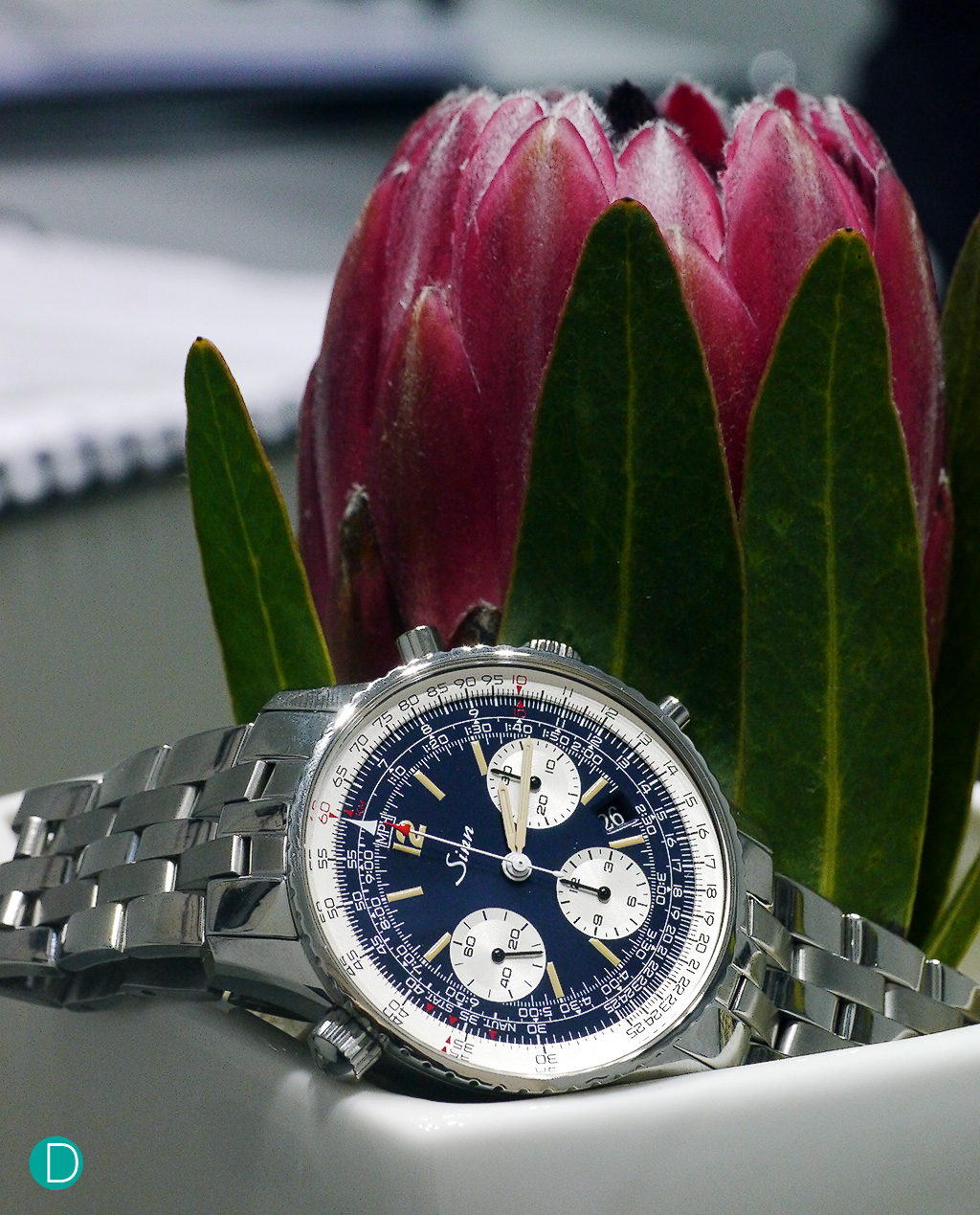 The 2015 Sinn 903 features a blue ivory finished dial, with luminescence hands which are made to mimic a vintage lume colour.

You must be thinking, so how did Sinn, famous for its diving U1s, U2s, end up with a navigator? That looks exactly like the navitimer? Here’s what happened.

These two watches are the Jacob and Esau of the watch industry. In 1979, Breitling went bankrupt and parts of the company were liquidated. Helmut Sinn, founder of Sinn, then bought the rights to use the dial layout of Breitling’s 806 and 809 Navitimer watches. This explains their similarities, and the parentage of the Sinn 903. In the earlier days, the 903 used a lemania movement (which is the most sought after 903), but has since transited to the Sellita SW500.

So now that we have explained the 903’s parentage, let us look at the 2015 Basel update. The major update is the colour scheme. The 2015 model uses a dark blue dial with luminous ivory coating. Its hands have also been swapped out from a pure white to a more cream, patina lume colour. These colour updates have created an even more profound similarity to vintage navigator watches and it continues to retain the existing quality that Sinn delivers. Sinn’s attention to detail ensures that the dial is done perfectly. It takes more than 30 different processes to make the dial, each colour is galvanized to give each tone and hue a crisp and clear finish. The impeccable contrast of the white slide rule ring with the blue, red, and brown on the dial and hands, recreates an incredible looking navigation tool watch.

It takes more than 30 different processes to make the dial, each colour is galvanized to give each tone and hue a crisp and clear finish. The impeccable contrast of the white slide rule ring with the blue, red, and brown on the dial and hands, recreates an incredible looking navigation tool watch.

Furthermore, the watch has a screw down crown, is negative pressure resistant, temperature resistant and water resistant to 100 m. An additional feature that the 903 has over other navigator watches is the crown at 10 o’clock. This brings us back to Sinn’s longstanding reputation as a no nonsense tool watch brand. This navigator watch embodies all of these traits. The 10 o’clock crown makes for easy activation of the slide rule function, that can be used as a ‘calculator’ to aid the reader in multiplication, division, or speed, distance and time measurements, fuel consumption, climb and decline, conversion of nautical miles into english mile and kilometer. All of which probably go unused in today’s world of incredibly intelligent human beings, or rather, mortals in possession of smart(er) gadgets. However, it will probably feel great for the wearer to know that his watch functions as a proper navigation timepiece and does not just look the part. An additional advantage that the 903 has over its competitors, is the crown at 10 o’clock. It can be used to activate the slide rule function.

While both the Navitimer and Navigator have their own strengths, we much prefer the Sinn. Although the Navigator dial and look is a Breitling product, we find that the modern 903 fares better than the modern Navitimer. This is because the modern Sinn stays ‘truer to form’, the case size, dial colours, font contain a stronger lineage to its precedent. That said, the psychological stigma of wearing a ‘rip-off’ Breitling will still stay even though it is grossly unfounded; sad truths from the marketing world of ‘Branding’.