Unlike the previous Snoopy Speedmaster, this Omega Speedmaster Apollo 13 Silver Snoopy Award is visually much more different then the other Speedmasters. To begin with, the dial is in white, unlike most of the Speedmasters that are available on the market.

Since we are on the subject of dials, we shall talk about the special details that are featured on this Speedmaster. Like its previous “Snoopy” predecessor, there is a Snoopy motif at the 9 o’clock subdial of the watch. The Snoopy motif on this version is different though; this one is lying down and he is not donning any spacesuit, unlike the previous one.

Also featured on the dial is the a special 14 seconds counter, in which there is a text saying “What could you do in 14 seconds?”. This is actually a tribute to the Speedmaster which was used in Apollo 13, in which it timed a 14 seconds mid-course correction manoeuvre precisely. 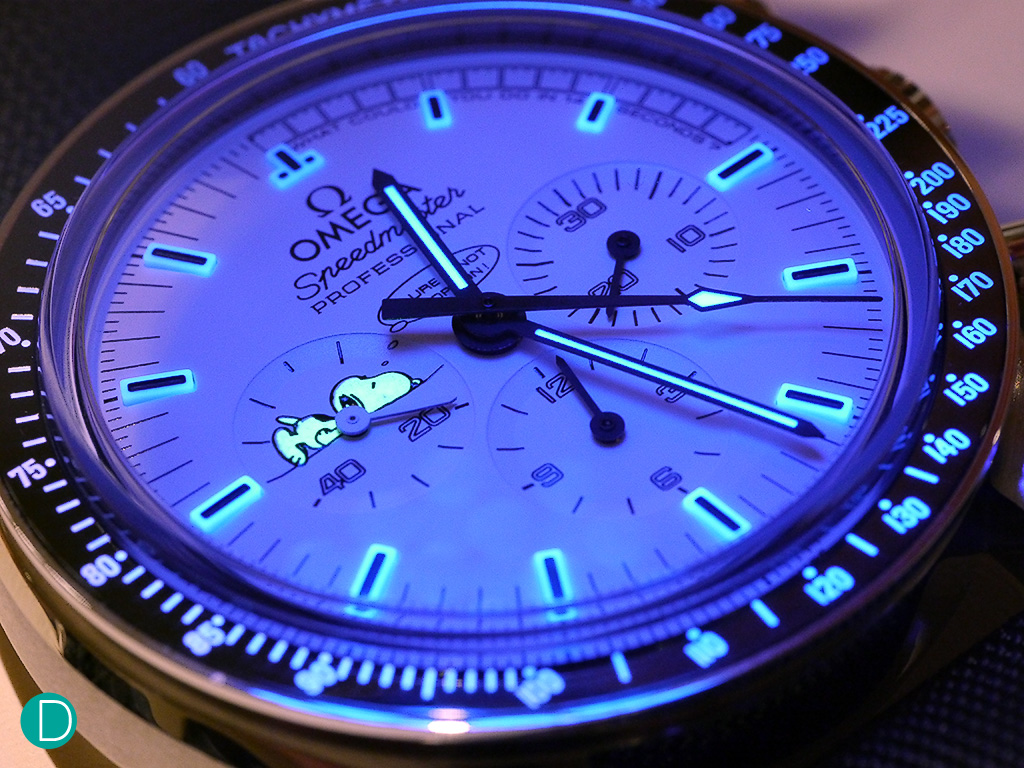 The lume on the Snoopy Speedmaster. This one is done very nicely, in our opinion.

The luminescent is one of the most striking and gorgeous features on the dial. Both the tachymeter scale and the indices are filled with luminescent materials, in which the latter’s lume plots surround the indices (which is a little unorthodox, but interesting). The Snoopy motif on the 9 o’clock subdial is also lumed, in which it is able to glow in the dark once it is charged with light. It makes the whole watch so much more interesting in the dark. When the Snoopy Speedmaster is worn on the wrists, it physically feels like any other Speedmaster Professionals. This is due to the fact that the 42mm watch is similarly cased in stainless steel. However, one great difference would be the bracelet, in which a nylon fabric strap was used. This reduces the weight of the watch, and it provides greater comfort as compared to using the stainless steel bracelets. Having said that, it feels psychologically different when one dons on this piece. Somehow, one feels as though he is transported back in time when he/ she wears this timepiece. Perhaps it is just Snoopy that had brought out the kid in us. But nevertheless, this is indeed one very special and significant timepiece. The special caseback that is found on this Snoopy Speedmaster.

Another interesting and intriguing feature of this particular timepiece is its beautiful caseback. Protected by a scratch-resistant sapphire crystal is a 925 silver medallion that resembles the pin that accompanied the Silver Snoopy Award that OMEGA received in 1970. The silver Snoopy is mounted on a plate of the same material and is surrounded by dark blue enamel. Silver powder is sprinkled by hand over the enamel of each individual caseback, in which it gives the impression that Snoopy is floating in space. The caseback is indeed really cute, and while it does not bear any horological prowess, it makes the watch feels so much more personal and special. A mandatory wristshot with the Snoopy Speedmaster.

The Omega Speedmaster Apollo 13 Silver Snoopy Award is a watch that is rather likable. We mean, look, the watch does not display much flaws or issues. It is powered by the reliable Calibre 1861 (which is featured on most Speedmaster Professionals), and it fits rather comfortably on the wrists of an average Asian. It looks rather great as well. To be honest, there is nothing much in this timepiece that we can complain about.

Just like its predecessor, we reckon this Snoopy Speedmaster is going to be very rare and popular with the collectors. There are only 1970 examples of this Omega Speedmaster  Apollo 13 Silver Snoopy Award available, and chances are they are going to sell like hot cakes. If one does have the opportunity to get this timepiece, we would recommend you to hesitate no further. It is a very robust and timeless horological device, and we feel that it is going to be very sought-after in the future.

The Omega Speedmaster Apollo 13 Silver Snoopy Award will retail at SGD$9,500. Well, perhaps 14 seconds is all you need to decide on buying this timepiece!