Often times we may have encountered spontaneous spurts of enlightenment, questioning the frivolity of the luxury industry and the senselessness of expensive watches. Taboo as it may seem given our identity as watch collectors, it is terribly close to the truth that this hobby is at best an exercise in futility. While that’s some stoic/socialist/leftist type of bickering, H.Moser puts the idea to the test.

With the Endeavor Concept watch, Moser strips naked a dial with a clear aim, to return to the essentials of function. It tears away at frivolity. A watch with a dial stripped of its logo, branding and indices has only one purpose; to tell the time. Part of a philosophical approach, this watch was designed to be a unique piece, but faced with the enthusiastic response this model received, H. Moser & Cie. decided to produce 4 new models, each available as a limited edition of 10 watches.

The Philosophy of Nakedness

Step away from the intrinsic irony that the watch is still a product to be sold and you would find literary significance in such a creation. As titled the Philosophy of nakedness, this article explores the artistic idea which purports that function exceeds style. This is largely contrarian to the ‘Aesthetic principle’ largely subscribed to by many other brands.

Cased in 18 K white gold, the Moser Concept watch measures 40.8mm x 10.9mm. It has a sapphire crystal and a sapphire display back. Renowned for its fumé sunburst dials, H. Moser & Cie deliberately chooses to have an empty dial, to show off the fume in its purest form. “In a world awash with aggressive branding, we’ve gone back to basics to unveil a watch of absolute purity.” The unblemished dial display of the Endeavour concept watch. 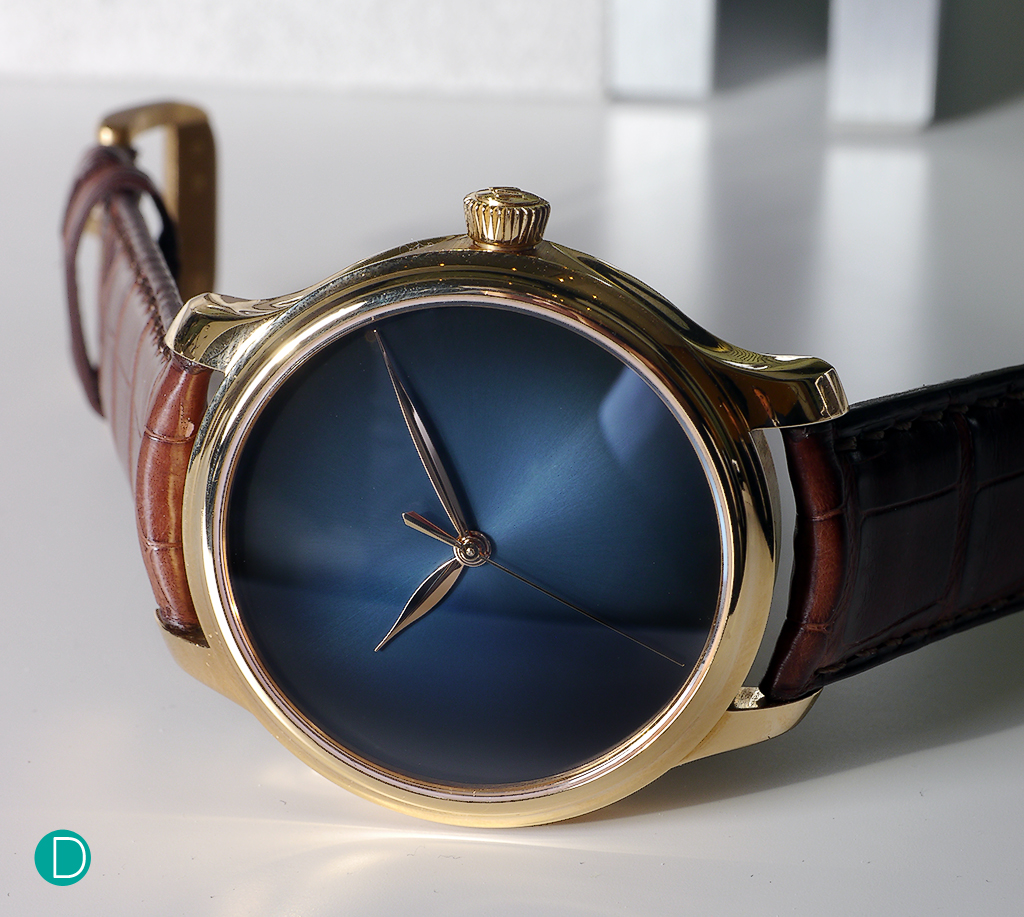 The case design is the same as the older Endeavour models, with the indented slopes along the case side. Leaf hands are used with a tapered seconds hand, congruent with the overall classic design of the watch. Since many are often used to indices and various indicators on the dial, the minimalist approach of an empty dial easily piques the curiosity of the wearer. At times, it creates a mirror effect, when the wearer looks at the watch and sees his own reflection, made even more distinct because of the spacious dark coloured dial. “This model is the antithesis of dial overload and turns the spotlight back on to distinctively human luxury, which remains true to the central aim of watchmaking: indicating the time.” Moser

The movement used is the HMC 343, a manual winding movement with a seven day power reserve. It also incorporates a power reserve indicator visible from the movement side of the watch. The movement also includes Moser’s trademark interchangeable escapement module, ingeniously designed for easy swapping during servicing. 4 models each limited to 10 pieces.

The Concept Watch Fumé is priced at approximately CHF 22,000 before taxes. The collection consist of 4 different models, each limited to 10 pieces and are only available through special order. Given its exclusivity and relative novelty in today’s market, few would appreciate or even be able to identify the watch on any owner’s wrist. So if you have the intention of wearing a noticeable timepiece that can catch peoples’ attention from a mile away, choose another brand, like perhaps, Audemars Piguet. This Moser Concept Watch is more for someone who appreciates watchmaking, does not want the attention, and could not care less if anyone notices his watch. The Caliber HMC 327, with the Silicon escapement wheel.