Honestly, I have never really understood why there’s so much interest in a watch. To me, a watch should just serve a single purpose. It should just tell time… as simple as that… and that should be accomplished with just one look. The day I laid my eyes on the Ms Golden Bridge was the day I felt that my beliefs were truly understood by someone at last! There it was… simplicity at its best! The perfect piece of art that was to be appreciated for what it was. No words could truly describe the elegance and beauty of this timepiece. When I received this gift, I was at a loss for words. All I could do was to appreciate its stunning beauty in silence. 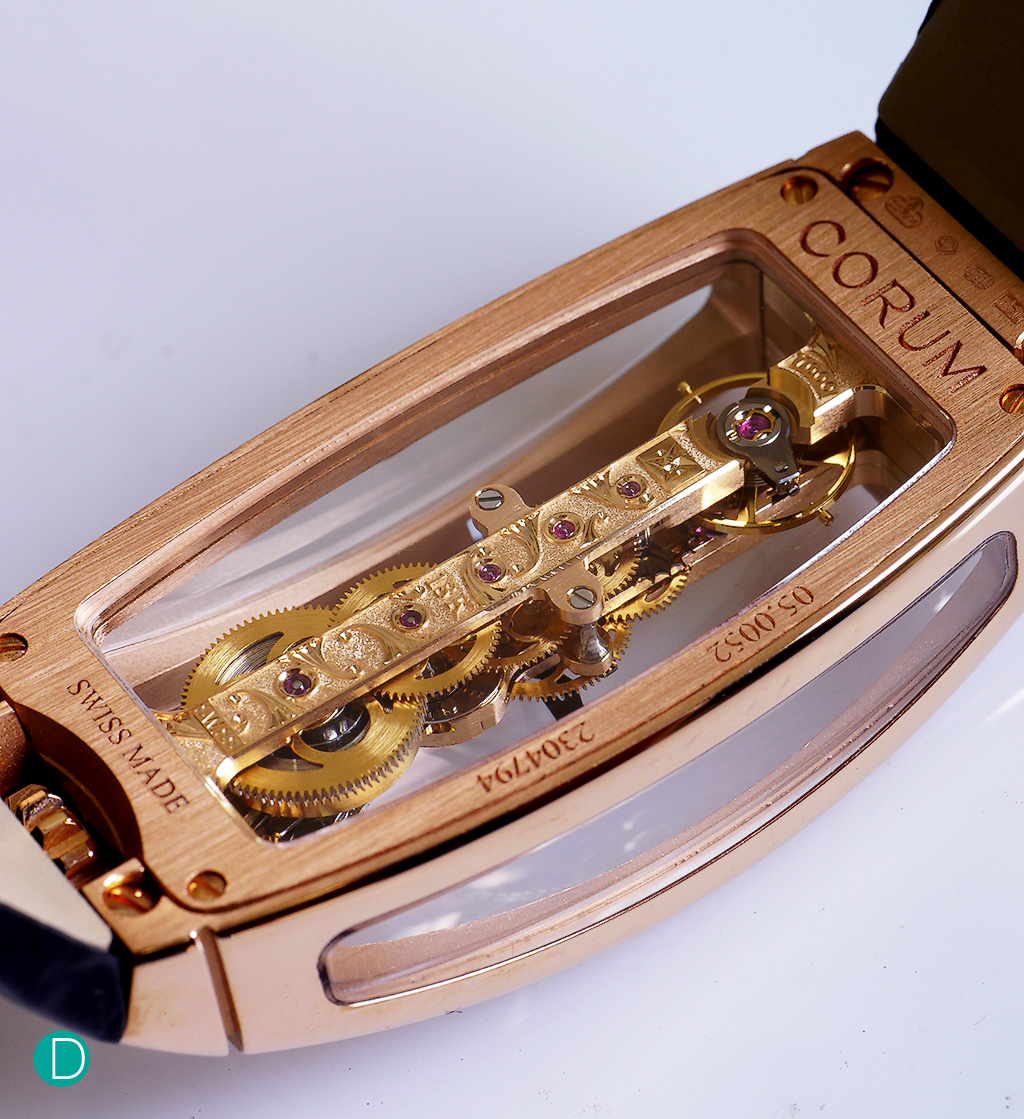 The very unique shape (I was told it was a tonneau shaped case) of the Ms Golden Bridge makes it ultra-feminine. The fact that the watchmaker encloses the mechanism in a see-through glass (yes, I was again told that what I termed as glass was actually sapphire crystal case) makes it even more desirable. It nudges one’s curiosity. Rather than just a cursory glance, it beckons one to take a closer look at the intricate bridges. It invokes a sense of wonder and awe in the person who must have given much thought into the design of this elegant watch. Who would have dreamt of such an ingenious idea…. bridge in a watch? Detail of the bridge and the winding transmission wheels.
Finishing is quite good, and the bridge itself is nicely engraved. The bezel is set with 90 round diamonds, amounting to a total of 0.67 carats.

It doesn’t take much to know that diamonds are a girl’s best friend. But, it does take a lot to realise that the way in which these sparkles are introduced to the design of a watch is of paramount significance. How many and where… these must have been the perpetual questions on the watchmaker’s mind. Too many would diminish the true value of the watch and overpower it. Too little, on the other hand, may be insufficient to enhance the appearance of the watch. A view of the case from the side. The entire movement is visible through the windows.

I think the watchmaker knows where to draw the line between simplicity and complexities. The Ms Golden Bridge has a simple line of small diamonds which are visible to the naked eye. In contrast, the intricacies of the mechanism behind the golden bridge can only be revealed with a microscope.

The movement, visible from the side window, seemingly suspended.

Words like escapement, balance spring, dial, crown, baguette movement are beyond my comprehension. But I would like to think that the Ms Golden Bridge is a rare beauty beyond compare. Editor’s note: Ms Gina Pang is a Deployant Friend who loves watches, but like many ladies, are not as attracted to the movement and complications as most gentlemen enthusiasts, but her appreciation of the mechanical aspects as well as the aesthetics is rather remarkable. Ms Pang enjoys several important timepieces in her collection.