We take a close look at the Lang & Heyne Georg, a new rectangular shaped watch with a form movement. The watch made waves in the recent Baselworld 2017, with the amazing movement and attention to detail. Here is our in-depth look.

Lang & Heyne is an independent watchmaker based in Dresden, Germany. They are a small outfit with a production of 50 watches a year made by 8 watchmakers, and was founded in 2001 by Marco Lang and Mirko Heyne. The latter left for Nomos earlier in the history of the brand as the two watchmakers had differing philosophies regarding their craft – and Marco wanted to take an artistic approach while Mirko preferred industrialization. The Lange & Heyne Georg. An unusual take on a classical rectangular watch.

The current production is limited, and not widely distributed. As a consequence the watches are  difficult to find in the wild But we were lucky enough to spend some good quality time with the Georg. 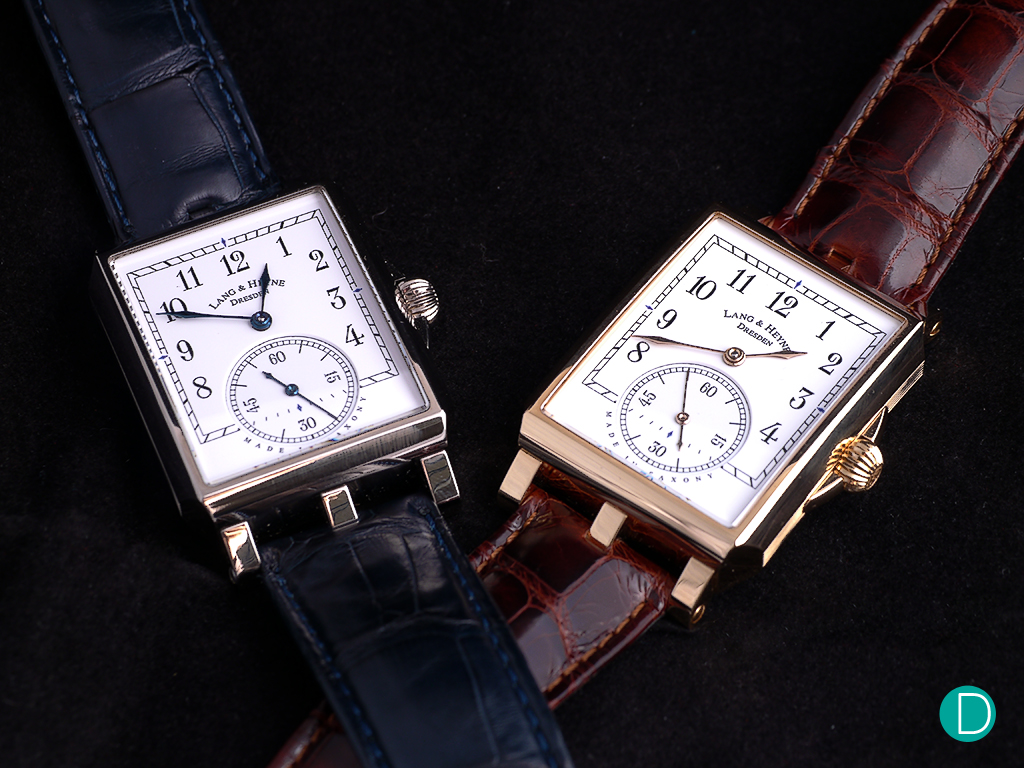 The Lange & Heyne Georg is available in rose gold, white gold and platinum. No yellow gold is offered, and unlike the other Lang & Heyne offerings, the Georg is not available in stainless steel.

The Georg is a rectangular, three-handed watch. This is Lang & Heyne’s first attempt at a square watch, which is a milestone, considering that their earlier watches were inspired by the pocket watch. In general, square watches do not do well commercially, but in the case for Lang & Heyne, the Georg has been very popular. If you might be wondering, the names of watches by Lang & Heyne are named after German rulers – in this case, Georg is named after a certain “Georg the Bearded”, who was a Duke of Saxony in the 15th Century. 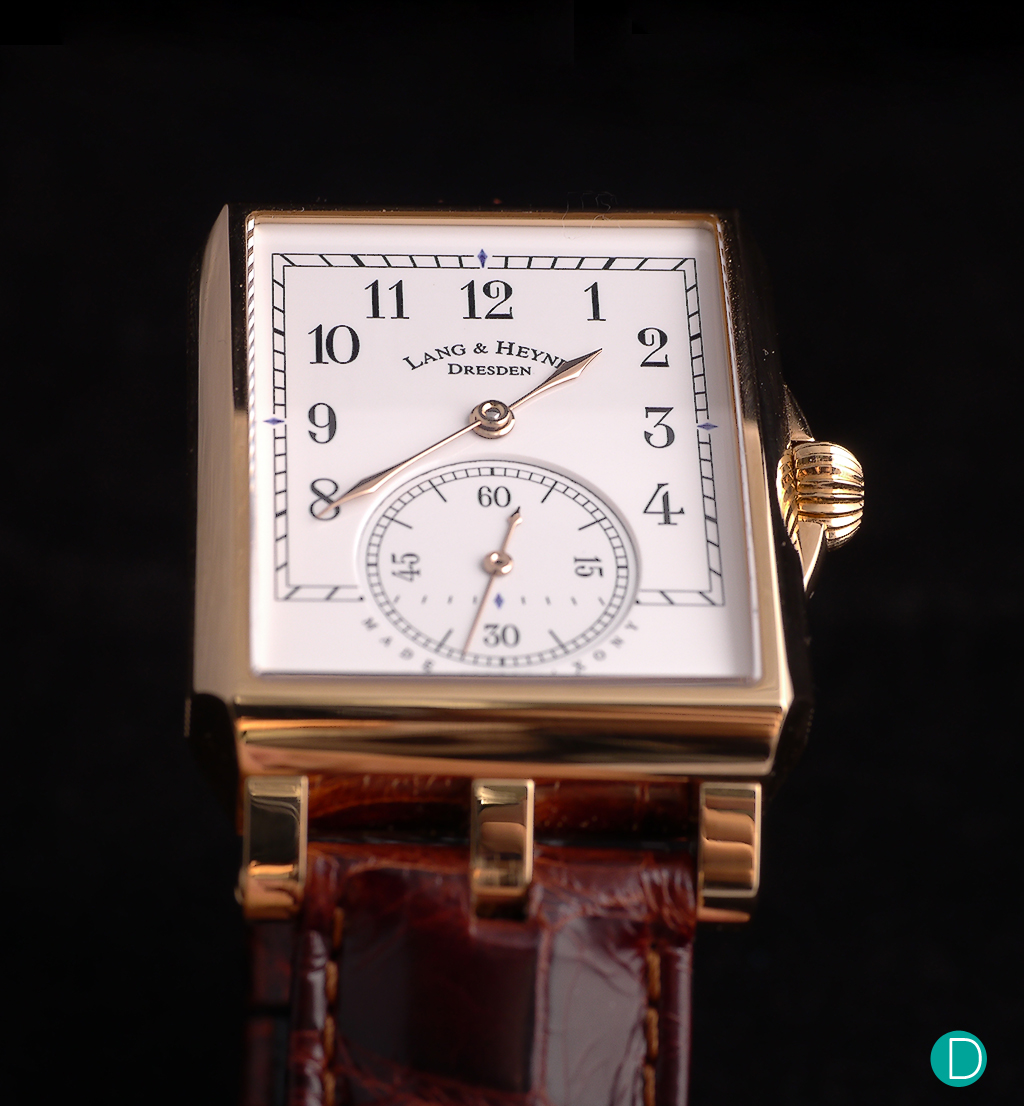 The case comes in Rose Gold, White Gold, and Platinum. Lang & Heyne decided not to make the Georg in yellow gold due to a lack of demand. Stainless steel is also not offered. However, as Lang & Heyne is an independent brand, they have more say in how they run things and how they sell their watches. Hence many aspects of the watch can be made to the specifications of the customer – the hands can be made in gold or blued steel for example. The other watches by Lang & Heyne offer even more opportunities for customization as they have more complications beyond the three-handed watch that the Georg is. The dial is resplendent in its two layered enamel coat.

The Lang & Heyne trademarks carry over from their previous offerings to the Georg, where things such as the triple lugs, onion crown and crown protector also appear. According to Lang himself, the triple lugs were made in their older watches to ensure stability of the watch when worn on the wrist, due to its size. However, over time, this became more of an aesthetic feature than a functional one. Ergonomically, the onion crown also allows the crown to be pulled out easily. The dial is magnificent, and the selected arabic numerals with lancet styled hands compliment the design beautifully.

The lancet hands allow the Georg to have good legibility, and upon closer examination, are also well finished. Earlier examples from Lang & Heyne featured more decorated hands, which in our opinion could also have been used in the Georg to make the dial more unique.

The grend feu enamel dial is two layered and made by Cadremiel. The seconds dial is slightly recessed compared to the main dial. While this feature is not unusual, it adds a nice touch, considering that Lang could easily have just specified it to be a single layered dial, which would most definitely cut costs. 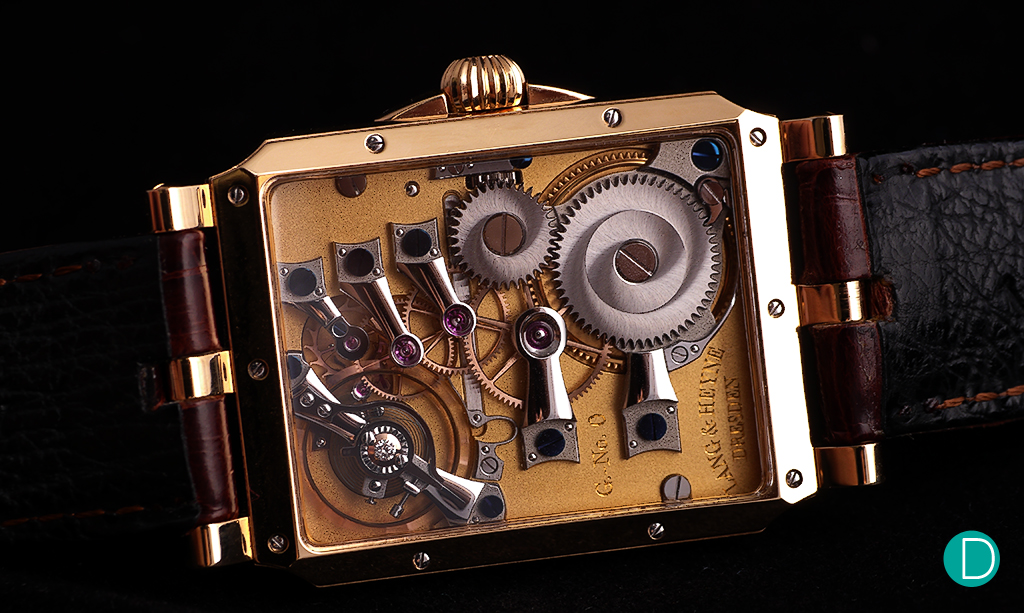 The movement is rather unusual. The wheels are held by massive stainless steel cocks which featured a curved surface. The effort required to finish these cocks is immense.

The movement here is beautifully finished. In the Georg, where the in-house Caliber VIII is used, there are multiple cocks across the movement, made by hand in stainless steel and meticulously finished in a polished and curved manner. Each bridge is hand-polished, and their placement brings out much detail in the case back, on top of making the view through the case back more three-dimensional. Marco mentioned that there was a greater demand for open worked movements since the Caliber I, and as such, current calibers have movements which do not cover the gear train with a base plate. The stainless steel cocks are magnificently and meticulously finished. The result is simply breathtaking.

The movement uses 19 jewels, with the addition of a diamond on the balance wheel pinion. This diamond is not the end stone we are perhaps familiar with for example in Lange Tourbillons, but is one which is purely for aesthetics rather than functionality. But it does add a subtle touch to an already refined and highly decorated movement.

An interesting design detail is also the engraving on the back of the movement. When one flips the watch over, it appears that the “Lang & Heyne” engraved at the back is upside down. However, this is intentional because Marco had intended for the user to flip the watch vertically to see the case back. The center wheel and its cock, as well as the cocks of the third wheel and fourth wheel is shown in this photograph.

The Lang & Heyne Georg is no doubt a very impressive watch. However,we feel some of the design elements in the watch intended as signature features of the brand DNA may seem a bit forced and detract from the classic feel.

However, the work is executed very well, and attention to detail meticulous. The workmanship is beyond reproach and if one is willing to look past the somewhat pretentious nature of said elements, one would be well rewarded with a masterpiece of German watchmaking that would a joy to own. A wrist shot with Marco Lange grinning in the background.