This is Jaeger LeCoultre’s year for the Reverso. It has been a good run for 75 years, since it first appeared in the manufacture’s catalogs, and continue to amaze. The case size has grown over the years to accomodate complications, and at one stage became quite large. The JLC Reverso Gyrotourbillon 2 is a case in point. Certainly a magnificent watch, a tour de force in technical virtuosity, but for many it was too large. So when the opportunity came to revise it, and pay tribute to the 75 years, JLC revisited the gyrotourbillon. The result is a case which is svelte while keeping with the dazzling techniques of the Gyrotourbillon 2. Here we review it. The Jaeger LeCoultre Reverso Tribute Gyrotourbillon. 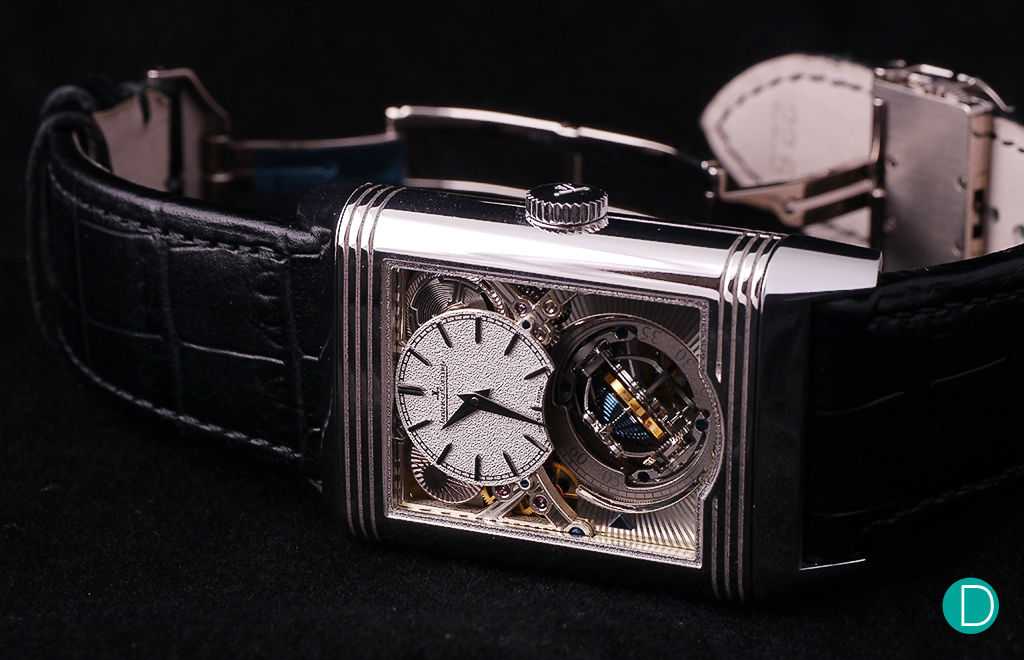 The Reverso Tribute Gyrotourbillon is the fourth iteration to the Gyrotourbillon which first came to light in a round case in 2004. Conceived by the joint team of Eric Coudray and Magali Metrailler, the original Gyrotourbillon was interesting as it was possibly the first foray into ultra high end watchmaking, and pushing the price envelope for the maison. It featured the JLC Caliber 177, which had a two-cage multi-axis tourbillon (the gyrotourbillon), an instantaneous double retrograde perpetual calendar, equation of time and power reserve indication. The hairspring used was cylindrical. This was not a limited edition, but production capacities for such a complicated watch meant that no more than 20 were made a year. It has since been discontinued after a run of several years.

The Gyrotourbillon 2 ran on the JLC Caliber 174. The movement is pure gyrotourbillon, and JLC had stripped it off the perpetual calendar, EOT, but made it in a form movement fitting exactly and only the rectangular case of the Reverso. As mentioned, it was massive. The case dimensionsare 55mm long, 36mm wide with a thickness of 15.8mm. And in platinum, it was very heavy. The case was so heavy that it required a locking mechanism to secure it within its carriage so it does not accidentally slip out. It had a front dial which is enamel, and a rhodium plated gold back dial. The Caliber 174 featured an evolution on the JLC hairspring technology, and featured a spherical hairspring. This hairspring followed the form prescribed by a sphere and JLC claims it to allow the hairspring to breath more regularly than any other hairsprings.

Then came the Gyrotourbillon 3. With this, JLC returned to the classical round Master case, and the Gyrotourbillon sported the Caliber 176 with Digital Instant Chronograph via a monopusher, Day/Night indicator, 24-hour display, and a flying spherical dual cage, multi axis tourbillon. It sat in a largish case measuring 43.5mm in diameter and a thickness of 15.5mm.

The Reverso Tribute Gyrotourbillon is iteration no 4, and is housed in a platinum Reverso case, and is 30% in width and thickness than the Gyrotourbillon 2. It now measures 31mm wide, 51.1mm long and 12.4mm thick. The JLC Reverso Tribute Gyrotourbillon, now in a slimmer case. Shown here is the front dial with the textured dial for the hours and minutes, and a massive cutout to showcase the gyrotourbillon.

The slide mechanism is slick, smooth and easy to operate. So it is a joy to slide the case and flip it from one dial to the other. The platinum case is hefty, and the weight can be felt as it sits on the wrist. But not uncomfortably so.

The front dial features a beautiful textured finish which we find very aesthetically appealing, and the back dial is skeletonized. The back dial is skeletonized to show more of the movement. The dial proper itself is heavily skeletonized and a am/pm indicator is visible at 2 o’clock.

The hands are traditional JLC Dauphine styled hands and are faceted and polished. The caseback shows engravings indicating the providence of the watch and the limited edition number. This example is a prototype, numbered 00/75.

The Caliber 179 uses the two faces of the Reverso to carry times of two timezones. The times on each of the dials can be individually set, and on the back dial (seen on the wrist as crown left), there is a 24 hour indicator, which is useful for use as home time while the front dial is used for local time when travelling.

The main attraction is of course the gyrotourbillon.

The Gyrotourbillon. The semi spherical balance spring is clearly visible in the photograph.

The tourbillon is carried on two axis. The outer cage is spinning to make one revolution in one minute and the internal cage makes one rotation in 12.6 seconds. These spin rates are quite fast, and a fascination to watch. A real spectacle. Another view of the tourbillon. In this view, the hairspring is not visible as it is only present on the other side of the balance wheel, but the drive mechanism of the dual axis is visible.

The finishing is to quite a high level without approaching the dizzying heights achieved by the top haute horlogerie houses. It is more than adequate for the engineering requirements to keep the movement clean and running properly. It is, however slightly disappointing, considering that this is one of the highest level watches that JLC offers, save for the Hybris Mechanica and Hybris Artistica series.

As a case in point, the cage is nicely polished, but not black polished. The cage’s edges feature a rather simple anglage, which appear to be uneven at some places. This will not affect the functioning of the gyrotourbillon, and is only an aesthetic setback. However, we do note that the watch we examined is a prototype (marked 00/75), and may not represent the final finishing.

Perhaps the only competition is to the Gyrotourbillon 2 (now discontinued. Last known retail was about US$350,000 for the platinum version, based on today’s exchange rate approximately €306,000). The new watch is less expensive, disregarding the historical differences in currency. Both are in a Reverso case. Both feature a dual cage multi axis tourbillon. The Gyrotourbillon 2’s tourbillon is more traditional, with bridges on both sides. The Tribute Gyrotourbillon’s cages are flying, anchored only on the back dial’s side with a bridge. The Reverso Tribute Gyrotourbillon is also way more friendly in its size, and more accessible to collectors with more variance in wrist sizes.

But it may also be interesting to compare with other multi axis tourbillons. Of note is perhaps are those made by Greubel Forsey. The Greubel Forsey Double Tourbillon 30 Technique (approximattely US$600,000 in platinum, approximately €540,000 by current exchange rates) is one possible candidate. But the way the double tourbillon is designed in the Greubel Forsey has the outer cage rotating in 4 minutes and a second inner cage containing the balance wheel inclined at 30° which rotates in 60 seconds. The Tribute Gyrotourbillon’s faster spinning cages are far more entertaining to watch. And the JLC features two timezones. Greubel Forsey does make a dual timezone model, the GMT (US$595,000 in red gold or white gold), but it only features only an inclined tourbillon, and not one with two cages spinning on two axes. Arguably, the Greubel Forseys are much better finished, rivaling the best practices in the industry for movement, case, dial finishing.

We loved the JLC Reverso Tribute Gyrotourbillon. We love the size. We love the relative simplicity (only two timezones cleverly shown on two dials). We love the Reverso case. And the way the gyrotourbillon looks. We could spend hours just staring at the tourbillon and observe as its spins on its axes in double quick time. We much prefer it to its elder sister the Gyrotourbillon 2.

We don’t quite love the price, but in comparison to the Greubel Forsey we covered in the Competitive Landscape analysis, its less expensive by half.

And we don’t love the level of finishing we saw in the review sample. We hope the finishing flaws we observed is only because its a prototype, and JLC will ensure that production watches are better finished. Although if this is true, we are not supportive of this practice of releasing prototypes which do not have the final finishing for review. The JLC Reverso Tribute Gyrotourbillon feels very comfortable on the wrist, thanks to its manageable size and weight.