The Jaeger LeCoultre Reverso is one of the icons of the industry. Created in 1931, it has stood the test of time, and have enjoyed high popularity for the last 85 years. This SIHH, to celebrate the 85th year of the Reverso, JLC has announced a slew of new Reversos to the collection. The Reverso One, The Reverso Classic and Tribute, The Atelier Reverso, The Reverso and Polo and The Reverso Heritage is added to the expanding line. The Editor’s Choice from this amazing crop is the Reverso Tribute Duo which we are reviewing here.

A bit of Reverso history

The Reverso was intially created (in 1931) to address Polo players who needed a watch robust enough for the sport. Jaeger LeCoultre’s response was the brilliant case on a carriage which can be flipped over so that the glass over the dial is protected from the ravages of the sport. The lines and design was elegant, and have remained elegant through the years. The case and its carriage, and the way it easily but securely slides over is remarkable, even by today’s engineering standards, it stands as one of in good stead. The technical Drawing of the Reverso, this one for a case used in the Large Duoface. But one which is largely similar to the one in the Reverso Tribute Duo.
This drawing shows how amazingly complicated the design and execution is. This is one of the few designs which have never been copied, and JLC remains the only watch manufactur to make reversing cases.

The case underwent some updates, and the Grande Taille (French meaning large size) came about during the time when Günter Blümlein ran JLC. He wanted to add complications to the Reverso line, but the pushback from the watchmakers and technical people was that there simply was no room in the small case to accomodate the complications. Blümlein’s response was simple enough, “Increase the size of the case.” And the team managed to revise the case, making it larger to accomodate the complicated movements which were to come, but retaining all the elegance and beauty of the 1931 art deco style. Quite a feat. This was in 1991, and the first watch to bear this new enlarged case were the collection to celebrate the 60th Anniversary of the Reverso. We found an interesting video on YouTube which speaks about this remarkable watch: The JLC Reverso 60eme.

As mentioned, this collection began in 1991 with the day/power reserve in a solid gold movement (Reverso 60eme). A tourbillon model, simply called Reverso Tourbillon was added in 1993, The Reverso Minute Repeater in 1994, the Reverso Chronograph in 1996, and a worldtimer watch known as the Reverso Geographic was added in 1998. The Reverso Perpetual Calendar was added in 2000. Each of these models were limited to 500 pieces, and remain very highly sought after by collectors.

To mark the 85th Anniversary, JLC has gone back to its roots, albeit mid-point in the Reverso’s history to recreate the size which is very similar to the Grande Taille. The Grande Taille watches measured (L x W) : 42.2x26mm and a thickness : 9.3mm. The new Reverso Tribute now measures 42.8 mm x 25.5 mm and a thickness: 9.15 mm. The result is a return to elegance.

The Reveso Tribute Duo gets the Editor’s Choice Award this year. The Editor chose this simpler Reverso Tribute from the two being offered…the other being the more complicated Reverso Tribute Calendar in pink gold. 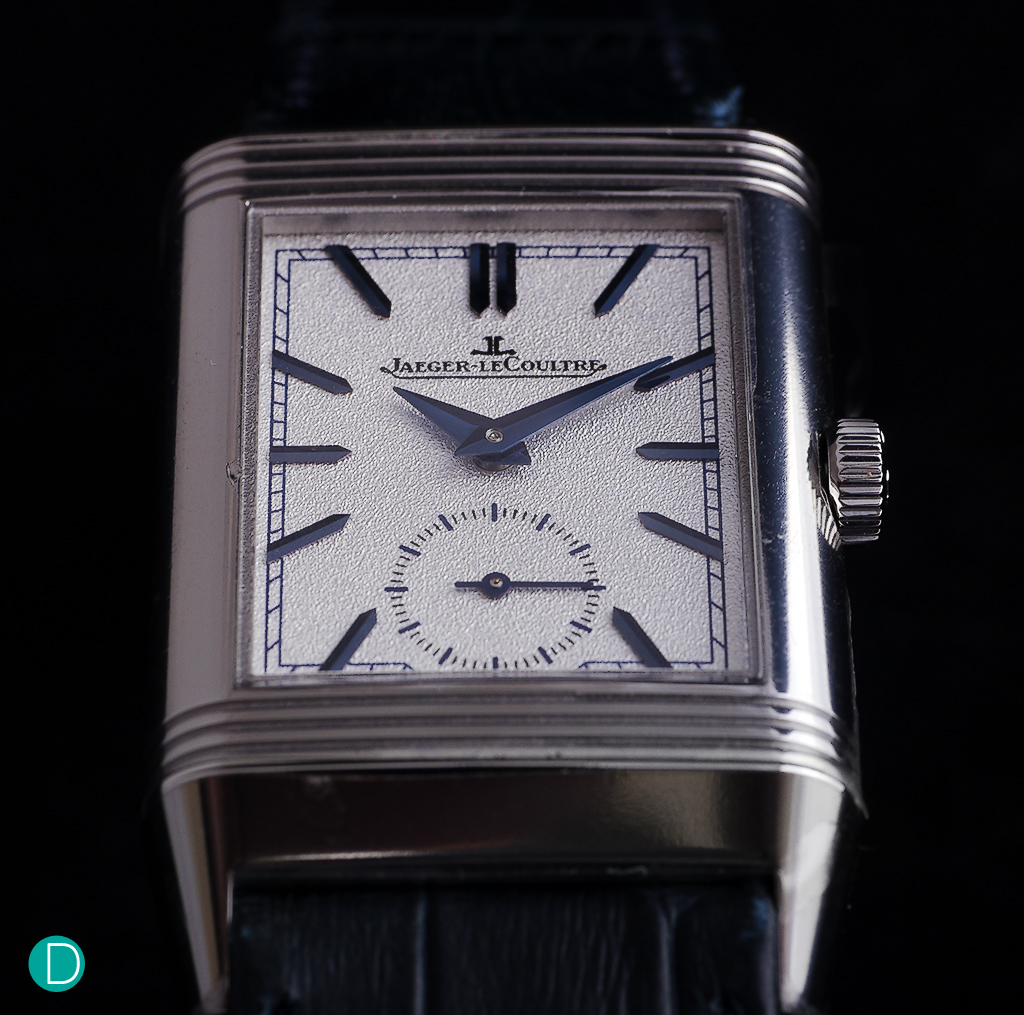 The front dial is what JLC calls finely grained opaline, and is a beautiful textured dial, with blued steel applique markers and blue steel Dauphine-type hands. The front dial shows the hours, minutes and small seconds. An elegant, simple watch. Flip the case over, and it reveals the other face. The dial on this side is blue with Clous de Paris hobnail guilloché pattern, silver-toned hour-markers. The hands are silver toned and shows the hours, minutes and a day/night indicator. This side can be used to show a second timezone. The second timezone can be adjusted by pushing a small slider which is hidden at the top of the case. This slider can be accessed when the case is moved out of its home position, like in the photograph above. Each click advances the hour hand in one hour increments. Very clever. And rids the case of any unsightly buttons to conveniently set the second timezone. The finish of the dials, hands are immaculate, and the resultant watch beams in a classic elegance that escapes many modern timepieces.

The movement fitted is the manufacture movement, mechanical hand-wound JLC Caliber 854A/2. This movement is not visible, but as is usual in all JLC movements, which we have examined either through the sapphire case back like the Editor’s JLC Platinum 2, or in the factory when the movements have been removed from the cases, the C.854 is well finished to a very high traditional Valee de Joux standard.