The Vagabondage series of watches is – to put bluntly – peculiar, relative to the rest of F.P. Journe’s offerings. The name ‘Vagabondange’ comes from the fact that the design itself is vagabond, wandering away from the conventional way of telling time and from the usual styling of the rest of Journe’s production. The very first Vagabondage (aptly christened the Vagabondage I) watches, which had a wandering jump hour feature, started off as one-offs in 2004 for a charity auction before being produced in a limited series in 2006. Then in 2010, came the Vagabondange II with digital jumping hours and minutes. This year, F.P. Journe introduces the final member of the Vagabondage triumvirate, a piece that is superior in design and technicality to its predecessors: the Vagabondage III. Here, we bring you the nitty-gritty details and our thoughts on the Vagabondage III, the last of a distinguished line of watches. The man behind the ingenious Vagabondage III: Mr. François-Paul Journe.

F.P. Journe continues to use its patented flat Tortue (French; tortoise) case in the Vagabondage III. The case, which is used exclusively for the Vagabondage series, measures 45.2 mm x 37.6 mm in span and 7.84 mm in thickness. At these dimensions, the watch remains elegant and very wearable. What we really like is how multi-faceted the case is and how Journe highlights to great effect each surface with either satin finishing or mirror-polishing. Just like other F.P. Journe timepieces, the Vagabondage III also features the brand’s signature flat crown with its grip-enhancing rope edge motif. The Tortue case. The contrasting satin and polished finish on the case serves to accentuate one another.

As fascinating as the case is, it is merely an entrée to the mains that is the dial. The inner smoked sapphire dial, framed by a screwed “appliqué” outer dial and still without the F.P. Journe signature (a hallmark of the Vagabondage series), reveals the 18 K rose gold movement. A window at 10 o’clock displays the digital hour indications by means of a numerals disc; another at 6 o’clock indicates the digital seconds; both are framed in white. The central minutes are indicated by a white hand, while the power reserve is indicated with a blued steel hand at 1 o’clock. Both hands are of course in Journe’s iconic teardrop-style. A watch lover’s dream. There are certainly pros and cons to having such a full-on dial. Regardless, all who gaze upon it will be captivated and mesmerised, if not by the sprawling movement parts, then the jumping seconds.

The Vagabondange III is a big step up in terms of design and functionality compared to the previous models. We were completely enthralled and entertained by the incessant jumping of the seconds discs. Yet at the same time we knew that to achieve this feature mechanically, no small sum of watchmaking wizardry would’ve been required. Prior to this, no one else had managed to incorporate a digital jumping seconds into a watch mechanically, making the Vagabondage III the first mechanical wristwatch with digital jumping seconds. The digital jumping seconds mechanism in the Vagabondage III is a world-first.

All that said, the design of the dial is not without its problems as well. In spite of the use of easy-to-read numerals to display time, legibility is ironically one of the weaknesses of the Vagabondage III. The dial of F.P. Journe’s last Vagabondage can be accurately described as a sea of gears and numbers. Indeed, the visibility of the jumping seconds and hours is undermined by the other numerals printed on the dial and discs, and by the other movement parts behind the sapphire crystal dial. Of course, one could argue that the point of the Vagabondage III’s design is not legibility but rather, for all to appreciate the intricate mechanics that happen behind the scenes. A dial filled with numbers and movement parts could be considered distracting. It could also be considered part of the charm of the Vagabondage III.

While time-telling on watches with digital displays is normally very intuitive in that they can be read instantaneously, the same cannot be said about the Vagabondage III – and no, this isn’t about legibility. It’s something to do with one’s immediate attention inevitably being drawn towards the outlined hours and seconds on the dial, and not the minutes. It would then take another second (as the seconds disc makes a jump) before the observer realises he doesn’t actually know the time. He will then proceed to re-read the hour display followed by the minutes that is displayed analogue-style. And indeed incorporating jumping minutes along with jumping hours and seconds would demand too much energy from the movement and is thus an impossible task (for the time being). It is a pity that there will not be a Vagabondage IV; were there to be a fourth instalment, we could reasonably expect this technical limitation to be overcome. Only a small handful of manufacturers can realistically hope to achieve such a feat, and F.P. Journe is one of them. 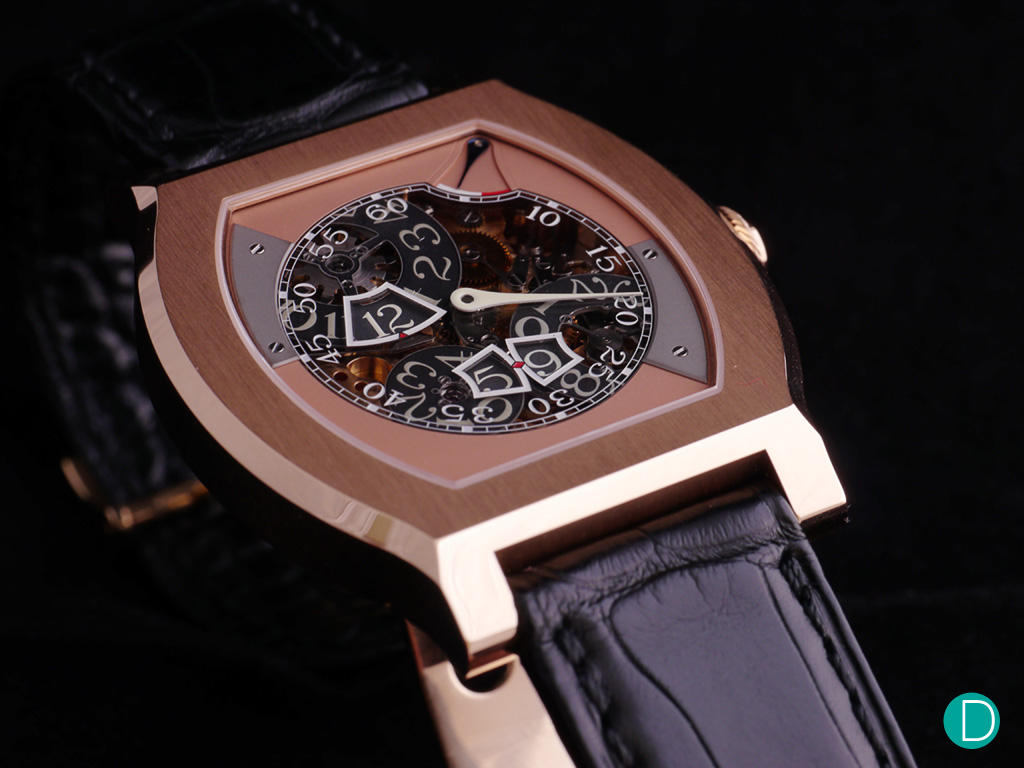 The time is not 12:59. Time-telling is not 100% intuitive on the Vagabondage III. The hours and seconds displays which have been explicitly highlighted will distract from the minute hand – reading the time will take more than an instant.

The new Vagabondage III is powered by the unprecedented Calibre 1514. The 32-jewel, 249-part movement is also tortue-shaped with a thickness of only 5.88 mm. Beating at a stately 3 Hz, the Calibre 1514 has an impressive 40-hour power reserve, up from the 30 hours of the Vagabondage II. To the uninitiated, 40 hours may sound below average. But those in the know will understand that squeezing 40 hours out of such a ridiculously power-hungry movement is a feat in and of itself. The bridges and base plate of the Calibre 1514 is rendered in gold, now a hallmark of F.P. Journe movements.

The Calibre 1514 relies on a remontoir which stores and releases energy every second to work its magic. The purpose of a remontoir – which is wound at regular intervals by the mainspring – is to deliver constant force to the escape wheel for more stable timekeeping. Without it, the constant jumping of the seconds discs would place such a load on the power source that timekeeping will be negatively affected. The 1-second remontoir also facilitates the storage and release of enough energy to jump the numerals disc(s) every second. The free-sprung balance of the Calibre 1514 with four inertia weights and a flat Anachron micro flamed spring.

The Calibre 1514 – rendered in 18 K gold – is as impressive aesthetically as it is functionally. Turn the Vagabondage III to its back and one will be treated to a host of fine finishing techniques. The top surface of the bridges are textured by Geneva waves, polished screw heads and chamfered slots. Meanwhile, the edges of the bridges are expertly bevelled and carefully polished. These decorations, including the tight perlage on the base plate do seem to stand out more on gold. F.P. Journe may not have been the first to use gold movements, but the brand has certainly contributed significantly to its popularity today. Finishing on the Calibre 1514 is attractive with gorgeous rounded and external angles on the polished bevels of the bridges, as well as highly textured Geneva waves on the top surface.

Finding an identical timepiece to compare with the Vagabondage III is a tall order, especially when there is none like it (the Vagabondage III is, after all, the world’s first mechanical digital jumping seconds watch). In fact, mechanical watches with digital jumping time displays are a rarity in itself. Arguably the most well-known of these rare beasts is the A. Lange & Söhne Zeitwerk. From a functional perspective, the Zeitwerk is more alike the Vagabondage II (jump hour and minutes) than it is the Vagabondage III. However, much like the Vagabondage III, the Zeitwerk was seen as revolutionary when it was first introduced. So exceptional was its concept and watchmaking that the Zeitwerk went on to win the prestigious Aiguille d’Or in the 2009 Grand Prix d’Horlogerie de Genève (GPHG). While the Vagabondage III sacrifices legibility for the privilege of visualising the numerals discs at work, the face of the Zeitwerk promotes intuitive and instantaneous time-telling. Framed by the so-called time bridge (which is actually part of the movement), the displayed hours and minutes are large and clear and are not distracted by anything else on the dial. As such, while it hasn’t got the whimsy of the Vagabondage III, it soars above the competition when it comes to time-telling (which, last we checked, was the original purpose of a watch). The Calibre L043.1 that powers the Zeitwerk is one of Lange’s most impressive, not just from a technical standpoint, but also aesthetically. The remontoir in the Zeitwerk has a similar role as the one in the Vagabondage II and that is to provide better energy management for the instantaneous jump of the hours and minutes. We can’t directly compare the Calibre L043.1 to the Vagabondage III’s Calibre 1514 as they are different technically, but we must again praise the Calibre 1514 for achieving the unthinkable. In terms of finishing and architecture though, the Calibre L043.1 takes the cake; it shouldn’t surprise anyone today that Lange remains the gold standard for movement aesthetics. The Zeitwerk remains one of the most incongruous, most iconic timepiece ever made by Lange.

Of course, no comparison between mechanical digital watches is ever legitimate without mention of the Harry Winston Opus 3. The Opus 3 is the brainchild of Vianney Halter, which explains the steampunk design of the timepiece. Originally launched in 2003, the Opus 3 was dogged by crippling technical issues which resulted in a 7 year delay before its first delivery in 2010. Harry Winston’s (and their clients’) patience has since paid of with the Opus 3 attaining a cult status within the watch community. The timepiece with its novel digital display of time using 6 portholes more often than not draws curious and confused looks from onlookers. For reference, the numbers in blue are for the hours, black for the minutes, and red for the date. What really makes the Opus 3 stand out though is its never-before-seen countdown feature; more specifically, the upper left hour display changes into a four-second countdown to herald the next minute.

The interesting origin story of the watch (which involves the collaboration of Vianney Halter and eventually Renaud et Papi who solved the technical issues of the timepiece), coupled with its exotic design and functions effectively propelled the Opus 3 to legendary status; it is indeed one of the most collectable pieces around today. The tale of the Opus 3 serves to give credit to the Vagabondage III. The Vagabondage III, with its novel digital jumping seconds display, is game-changing, just as the Opus 3 (and Zeitwerk) was many years ago. While the Vagabondage III is unlikely to attain the extent of stardom that the Opus 3 has (due to the lack of a romantic backstory), it will still be acknowledged as a technically superior piece, a clear evolution from digital watches past. 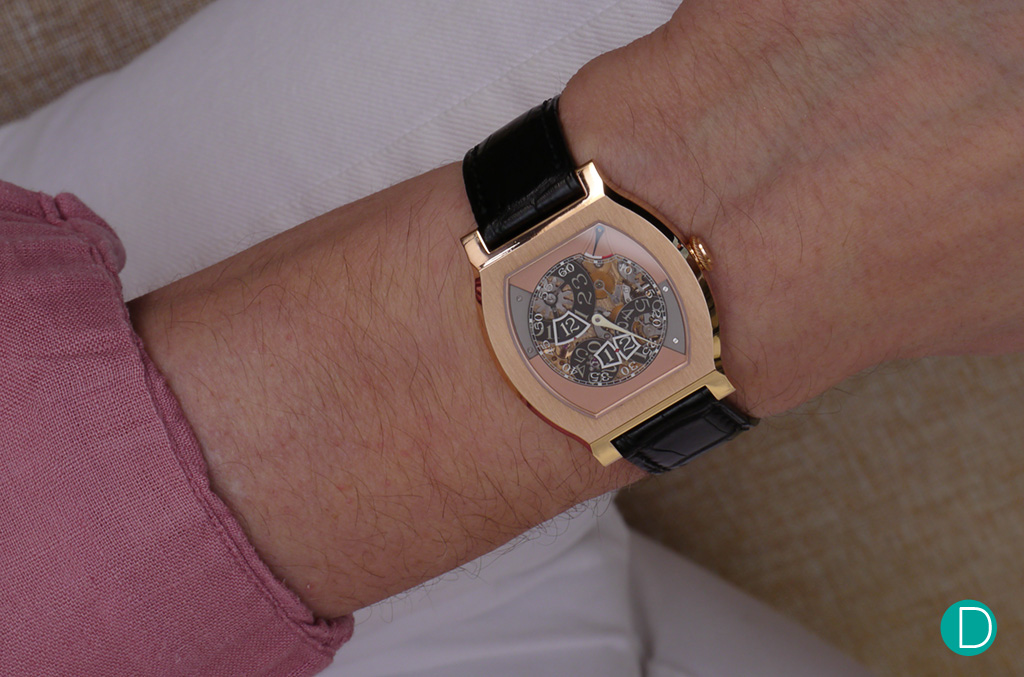 On the wrist of its maker. The Vagabondage III is an elegant figure on the wrist thanks to its restrained sizing.