Perhaps the name Degussa is not a familiar one, especially among the watch cognoscenti who are not participants in the precious metals market. The company, Degussa Goldhandel GmbH is one of the world’s largest precious metals retailer, and recently launched a rather interesting watch in MunichTime 2016. The watch is the Degussa Limited Edition Palladium 2016. We saw the watch in Singapore recently and became quite well acquainted with it. We find it an intriguing proposition. Utterly classical and magnificently made, with a very interesting manufactured movement, it is quite breath taking. But not without some major detractors. In this detailed analytical review we explore why it caught our attention. And why perhaps it may not be a runaway success. The company Degussa has been around in Germany as a retailer for precious metals such as gold, silver and platinum for 140 years. Since 2010, Degussa is a wholly owned subsidiary of an investment trust held by one of Germany’s wealthiest families. In August 2014, Degussa Group acquired its own precious metals refinery in Pforzheim, Germany. The refinery is active in the reprocessing of scrap precious metals as well as the production of upstream products for the jewellery industry.

In 28 October 2015, they opened a retail outlet in Singapore. The 3,000 square feet Singapore branch is Degussa’s first foray into Asia and is located on Orchard Road. Their other physical stores are located in Europe. They also operate an online store for precious metals in pure form as bars but also a rather successful section specialising in precious gifts.

The Singapore physical store offers investment products like gold, silver and platinum bars with assay markings. And Degussa also offers a wide range of exquisite gifts – timepieces, jewelleries, writing instruments, gold-plated roses, figurines and many more. For a while they have been offering watches in this category, but the watches are typically solid gold and equipped with either a quartz movement or a Selita movement. The solid gold watches are rather reasonably priced circa S$ 6,450to S$ 8,690, rather reasonable value for a solid gold watch. They also have a pocket watch shown below, with a Unitas movement, also in solid gold for S$ 9.279. The Degussa 750 Gold Pocket Watch in 18k yellow gold and a Unitas 6498 movement.
The look of the watch is utterly classical, reminiscent of early Breguets and Patek Philippe pocket watches.

The Limited Edition Palladium 2016 was introduced in MunichTime 2015. This edition is a limited run of a total of 25 pieces Worldwide, with a case in solid 950 palladium. 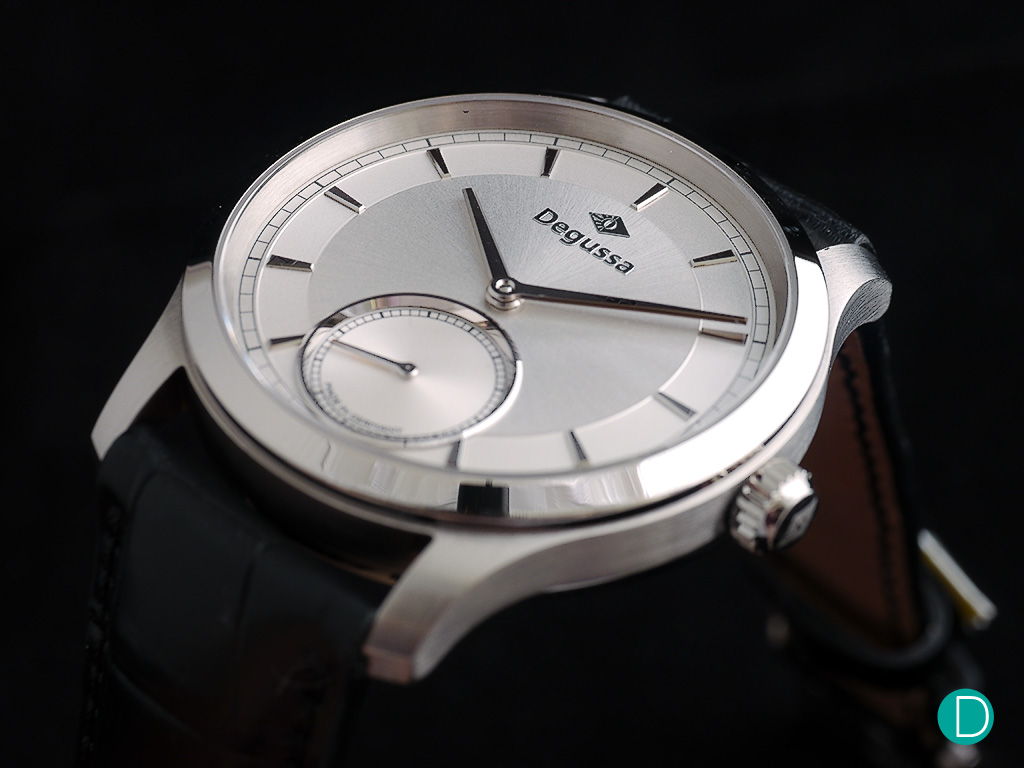 As with the pocket watch, the case and dial design is very classical and traditional.

The case is massive 3 piece case with a polished bezel, brushed case middle and a screw-in back with sapphire glass display.The case shape is round with tapered lugs which smoothly blend into the case sides. We were told the case is entirely manufactured in-house in Degussa’s facility in Pforzheim. Build quality is first rate. The palladium case used has a purity of 950. It is harder but less dense than platinum and more resistant to scratches.

Palladium is a member of the platinum family of metals. Palladium is rare – much rarer than gold and even platinum! Its usage in watch cases is usually as a part of the alloy mix for white gold. White gold cases with a high palladium content, like those made for Lange do not need to be rhodium plated to maintain its sheen and not succumb to heavy patina over use. But its use in pure form in watch cases is limited. Possibly due to the dull gray white appearance of the metal. It lacks the inner glow of platinum or the warmth of white gold. 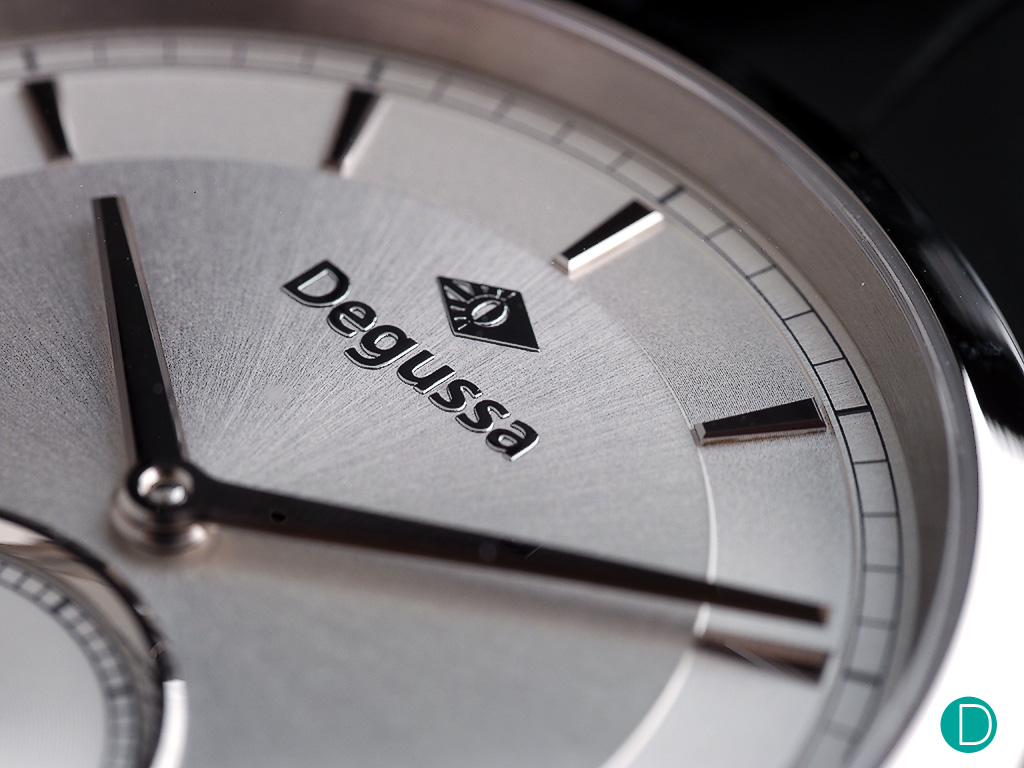 The Dugussa logo and name is the only embellishment on the dial other than the markers.

The watch dial appears in the palladium-typical gentle gray-white. The dial is austere, simple and legible, and comprises only of the railway minute track with appliqué shaped bar markers. The appliqué and hands are faceted and polished. The dial itself is a massive silver dial with a chamferred, sloping outer edge, and a subsidiary seconds subdial at 6 o’clock. The subdial is framed by a rhodium plated ring.

The overall appearance is very sober and classical. Traditional, even.

We find the movement to be rather intresting. The movement is the C.33.1  which is a manufactured movement by Uhren Werke Dresden. UWD  is a small manufacture out of Dresden. The talent behind UWD is none other than Marco Lange of Lange & Heyne and is funded by Prof Ulrich Rohde, who is an inventor in the field of high-frequency technology. The company is in partnership with Sinn (more below) and Martin Braun. Visually, the case back is arrestingly beautiful. The movement features several beautifully designed and crafted bridges holding the wheels in place. The barrel assembly is flying and this enables UWD to make the movement to be rather thin at 4.3mm in a 33mm diameter movement.

The movement is conceived and manufactured in-house in their facility in Dresden, and final assembly into the cases is done in the Degussa factory in Pforzhiem. The fine regulation system uses a system similar to the age old micro regulation system. But the balance wheel is adjusted and regulated by the gyromax like inertia masses around the wheel. We particularly like the open architecture of the movement, afforded by the open worked bridges which reveal the 6 armed wheels.

Movement finishing is quite nice. With all the traditional requirements met with ease. The anglage is nicely polished and gleams nicely. All the screw openings are countersunk and polished as are the screw heads. One nit might be the lack of inner angles on the bridges, perhaps these might be incorporated into the openings, and will make a more virtuoso like movement.

Retailing at S$ 13,910 ( inclusive of GST), the value proposition offered is quite remarkable. For this price, most manufacturers offer a titanium, stainless steel or ceramic case, but the Degussa is offered with a solid palladium case, which with the interesting, manufactured movement adds up on its side for a compelling value. On the negative side, the raison d’être for a luxury watch lies not only in exceptional design, a good movement, but also in the lineage and history of the company offering it. And in this respect, Degussa offers little. Secondary prices are unlikely to soar to make the Limited Edition 2016 Palladium a solid investment.

As mentioned, there are not many watches with palladium cases. Perhaps the grey white metal is not as popular as white gold or platinum because of its duller appearance. But nonetheless, several manufacturers do make 950 Palladium cases, though almost all are limited editions, as is the Degussa Limited Edition 2016 Palladium. Parmigiani Grand Kalpa Palladium (made in 2005, last known retail is US$ 19,000, with secondary prices hovering around the same price) was initially proposed by Parmigiani as an alternative to ceramics. The watch was presented by company at the world premiere and became a symbol of luxury and expensive beauty. The movement is the automatic caliber PF.331 with indication of hours, minutes, seconds and date. This limited collection series comprises of only 3 pieces.

Hublot Big Bang King Palladium (approximately US$ 30,000). Hublot experimented with the material in a few editions of the Big Bang. The sport men model “Big Bang King Palladium” is intended by Hublot to be a “heavy” design. The watch case is round, with a diameter of 48 mm. The color range of collection includes silver and black tones. The glasses are sapphire. The watch is equipped with rubber strap with folding buckle. Movement is the self winding HUB 1400. The case and rotating bezel are made of palladium, the dial is black. The strap is made of rubber.

H. Moser & Cie Mayu Small Seconds Palladium (approximately S$ 31,000 with GST circa 2013, US$ 16,500 then). Moser made these in a limited edition of only 20 pieces with a blue fumé dial, and the rather beautiful caliber HMC 321. This movement features the Straumann double hairspring with stabilized breguet overcoil, a speciality which Moser now reserves for only the top of the line watches, but in the pre-Meylan era, was fitted as standard.  The watch case is 38.8mm and bears the typical Mayu signature of the curved case back.

As can be seen in the Competitive Landscape analysis, the other palladium cased watches are all much more expensive than the Degussa. All three in the list (not exhaustive, of course) have in-house manufactured movements. Arguably the Parmigiani and Moser are ezquisitely designed and finished. But the Degussa is no slouch, as the UWD movement is quite beautiful as well. The movement is not exclusive to Degussa, as the Sinn Meisterbund uses the same movement, but it is well designed and nicely finished. On the wrist, the 42mm is comfortable to wear.

So we find the Degussa Limited Edition Palladium 2016 to be a bit of a conundrum. We really like the sober aesthetics. The classical look of the watch. and we also like the movement. But the lack of a history and a story behind the name will detract this watch from being in high demand. Perhaps it is just apt that only 25 pieces will be made, and only one is available in the Singapore store (no 18/25).