In the horological industry, we have seen the rise of big, masculine watches during the last decade or so. As usual, there are varying opinions on this: some of the collectors think that such watches are stylish and awesome, while others might feel that it is too brash and ridiculous. Breitling, for the longest time, have been producing large watches that many have considered to be fashionable and cool, and perhaps we feel that collectors who have a thing for large watches might be in for a treat today.

For Baselworld 2016, Breitling have launched a few novelties, in which there are a few that have caught our attention. One of them is the highlight of today’s article: the uber-cool Breitling Avenger Hurricane. Not only does the timepiece feature an exciting nomenclature, but the aesthetics and technical bits are pretty intriguing and mind-boggling as well. At the first glance, the Avenger Hurricane seems to be a stealthy and mysterious piece. The watch features an all-black case, with a black textile strap and black dial. We shall focus on the latter later, and dive straight into the case of the watch first. The watch, notably, is fitted with a 50mm case that is made with this material called the “Breitlight”. “Breitlight” is a new composite material that is produced by Breitling, and it is said to be 3.3 times lighter than an equivalently-sized case that is made from Titanium. Its lightness is pretty apparent, especially when one puts this watch onto the wrist. It is unexpected, especially if you are used to wearing large watches like the Audemars Piguet Royal Oak Offshore or Panerai Luminor before. It can be a double-edged sword though, since some people would want to feel the weight of watch on the wrists. But for those who prefer something that is lighter, the Avenger Hurricane is certainly a welcoming alternative for them.

Additionally, the material is said to be harder and more corrosion-resistant as compared to the conventional case materials. On top of that, the material is also anti-magnetic and anti-allergic. This is rather intriguing, and it definitely makes this watch much more robust for extreme activities or harsher environments.

The watch also features a unidirectional bezel, made from the same “Breitlight” material. Another interesting aspect of the watch case is its screw down crown and chronograph pushers, in which it is textured to give it some grip and add some design into it. Although it is seemingly insignificant, but we actually think that it gives the watch a more rugged and military-like feel. 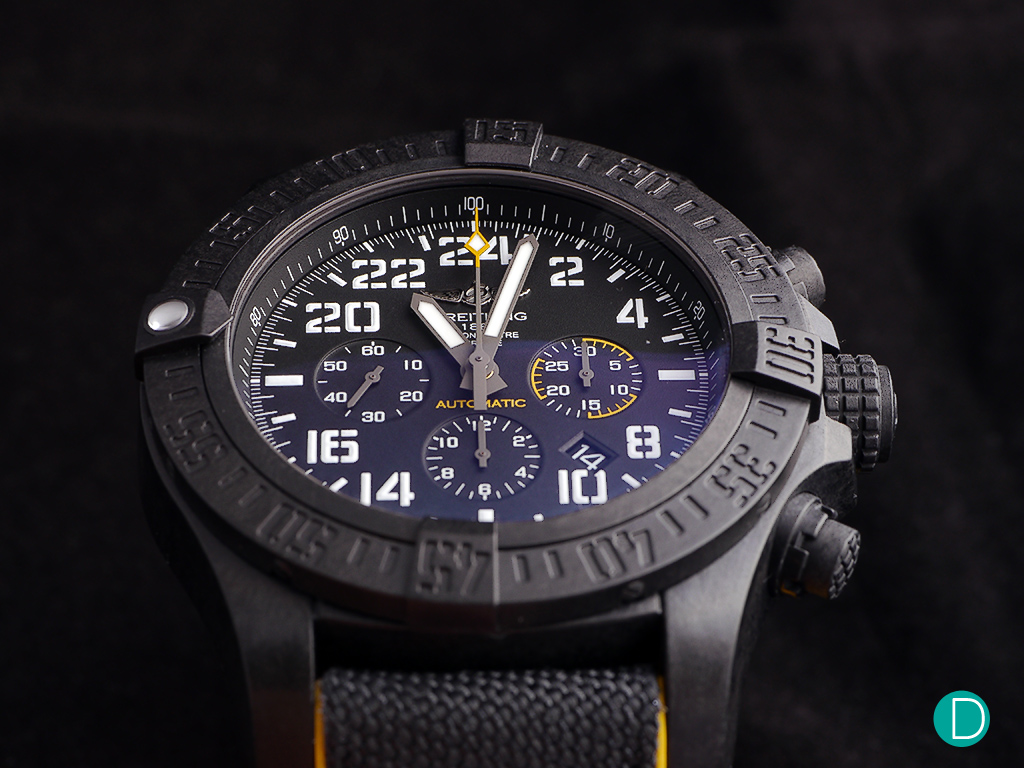 Another angle of the watch. It is heavily inspired by the military, which is a good thing for a timepiece that is large and masculine.

As mentioned above, the Avenger Hurricane is fitted with a black dial. It is heavily inspired by the military/aviation, and it is apparent from the detail and the aesthetic. For instance, the dial features a 24-hour time display, which is according to the military standard. That is further accentuated by the military/aviation stenciled fonts, which gives it even more masculinity. In addition, the white and yellow detailing on the dial makes the timepiece legible, and it adds some style onto its looks as well.

The watch also features three sub-dials, and a date indicator at the 4:30 position. Overall, the design is a bit cluttered, possibly because of the hour indices. However, that is partially mitigated by the large case, which allows the dial to be larger and hence the components to be spaced out. It is still a handsome watch, nonetheless.

The movement: Caliber B12 The caseback of the watch, proudly showcasing that the timepiece is chronometer certified.

The watch is fitted with Breitling’s in-house Caliber B12, an automatic movement which boasts a power reserve of around 70 hours. It features the chronograph function, as well as a date indicator. One particular note about the date indicator would be the design of the date wheel, in which we feel the use of black for the base had allowed it to integrate nicely with the dial.

Another thing to take note would be the fact that this movement is chronometer certified, which ensures that the movement is well-built with great accuracy.

The only downside, we feel, is the lack of a display caseback. This means that we are not able to enjoy the beauty of the movement, and it is a pity because movements with chronograph complications are usually rather mesmerizing. 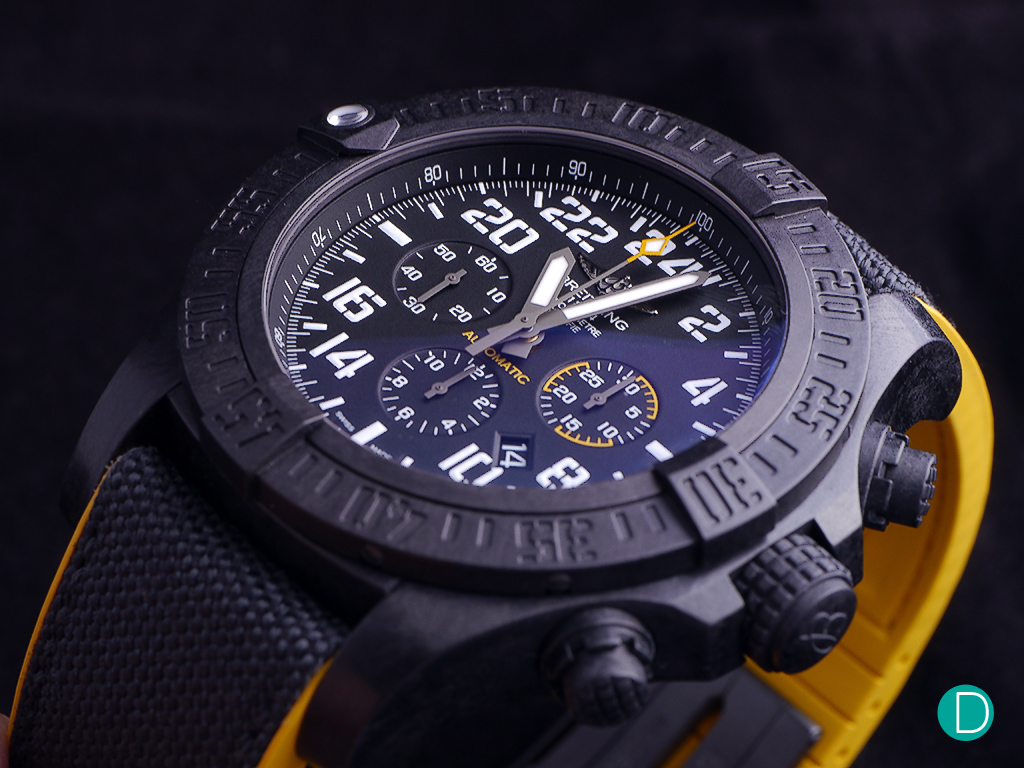 Granted, this is a very nice watch, but one that is unfortunately too big for some Asian wrists.

Well, to be brutally honest, we are pretty much torn on this one.

On one hand, we like how the watch looks – it is manly, well-built, and it appears to be rather cool. We like the masculine design, in which it was inspired by both the military and aviation. The use of yellow and white, together with the black case, makes it pretty eye catching too. Also, it is a very robust watch too, in which it can withstand tough conditions or rough usage without incurring too much dings or damages. In addition, the strap, which consists of a yellow rubber core and a high-resistance black Military textile fiber exterior, is also very comfortable and pair nicely with the black watch case. In short, it is a watch that has both form and functionality.

But on the other hand, we think that it is a tad too large. The watch feels a little too light for its massive size. Also, at 50mm, not many people pull it off the wrist. This is especially true for the many smaller built Asians. And that is a pity, as we think that this is a really exciting piece that many young collectors will be attracted to.

In short, we think that this is a nice watch to own, if one feels that he or she can pull off a 50mm timepiece on their wrist. At S$11,870 (with taxes), the Avenger Hurricane is not exactly a cheap watch. But if you have a thing for big watches, we reckon that it is a piece that you should look at. Well, what about us? Honestly,  we would have fallen head over heels for this piece, if it was sized much smaller at say, 44mm. No doubt that it is a pretty desirable timepiece, but we have to consider the fact that it is something that will probably not fit as nicely on our wrists.