Audemars Piguet has once again put forth a strong showing at SIHH. The Le Brassus manufacture presented the Royal Oak RD#2 which is, at the time of writing, the world’s thinnest self-winding perpetual calendar watch, reasserting its watchmaking and engineering prowess. The first women’s Royal Oak Concept model as well as the brand’s first flying tourbillon was also presented at the fair in the form of the Royal Oak Concept Flying Tourbillon, smashing two milestones with one watch. One other novelty that did catch our eyes did so not because it was perplexingly complicated or outrageous in design. Rather, it was because of familiarity and subtlety. Enter the Audemars Piguet Royal Oak Jumbo Extra-Thin, now in titanium and platinum with a new smoke blue dial. Audemars Piguet gets a lot of flak for its over-reliance on the Royal Oak line but one thing the brand knows is that you don’t mess with an icon. That was the approach that they had taken with the new Royal Oak Jumbo Extra-Thin and their conservatism has yielded an absolutely stunning interpretation of the reference. Here, we bring you the details and our thoughts on the new Audemars Piguet Royal Oak Jumbo Extra-Thin 15202IP. The Royal Oak Jumbo Extra-Thin 15202 has always been the closest recreation of Audemars Piguet’s original 1972 Royal Oak, the 5402ST. The new 15202IP shares the same 39 mm case dimension as the fan-favourite steel Jumbo Extra-Thin model, the 15202ST, as well as the very first Royal Oak. In fact, every other dimension, the mechanics and the overall style of the watch remains exactly the same. What’s new in the 15202IP though is the materials used. Crafted in a mix of platinum and titanium, the watch features unique aesthetics that subtly differentiate it from its predecessors. Brushed grade 5 titanium is used for the watch case and the larger bracelet links while polished platinum is used for the bezel and smaller bracelet links. The effect of this combination is surprisingly potent, and it’d be fair to say that the whole is greater than the sum of its parts. The darker, highly-textured quality of the titanium contrasts splendidly with the blindingly polished platinum. Each metal and finish enhances the presence of the other exponentially. And yet, unless you observe closely and are in the know, the 15202IP will easily be passed off as another stainless steel Royal Oak instead of a special variant. We can imagine that this ‘stealthiness’ will be appreciated by the future owners of the reference. What wouldn’t be appreciated, however, is the ease of which the polished platinum bezel attracts scratches – this thing is the scratch magnet to end all scratch magnets. The contrast between the brushed titanium and polished platinum is striking.

The other change introduced to the new Royal Oak Jumbo Extra-Thin is in its dial. The novel titanium/platinum variant is equipped with what the brand calls a ‘smoke blue dial’, essentially a gradient blue dial. The dial goes from black on the periphery to an electric blue in the centre, a look that is more dynamic than the uniform blue dial in the original 15202ST. Apart from the colour, every other dial element – the hands, the markers, the layout of the ‘AP’ logo and the company marquee, and the ‘Petite Tapisserie’ guilloche pattern – remains unaltered; the iconic face of the watch is therefore preserved. The smoke blue dial goes from black in the periphery to blue in the centre.

Beating inside the new Royal Oak Jumbo Extra-Thin 15202IP is the well-known Calibre 2121 used in previous Royal Oak Jumbo models, a modern incarnation of the original movement used in the very first Royal Oak. Wound by a central rotor, the movement has a power reserve of 40 hours and operates at an atypical 2.75 Hz beat rate. It is also delightfully thin, measuring in at only 3.05 mm thick.

From a finishing standpoint, the movement looks as clean as ever. The usual culprits can be seen through the sapphire crystal case back: Geneva striping, polished chamfers, polished screw heads, circular grained base plate and of course the gorgeous skeletonised gold rotor. The watch as a whole is a showpiece of fine finishing, from the case, to the individual bracelet links, and to the unseen components of the movement. In the field of fine luxury sports watches, the Royal Oak is widely regarded as king (although the Nautilus by Patek Philippe will have something to say about that). There is nothing revolutionary about the newly-released 15202IP but the subtle twist in materials and finishing is a positive move. The Royal Oak Jumbo Extra-Thin 15202IP, with a retail price of USD34,800 will be a boutique-only AND limited edition of 250 pieces. Possibly competing with this new special edition Royal Oak are several interesting characters from rival brands. One such character is the “controversial” Nautilus Ref. 5711/1P 40th Anniversary Edition by Patek Philippe – it’d be wrong not to mention the Nautilus when talking about the Royal Oak. The watch was one of two Nautiluses (Nautili?) presented in 2016 to celebrate the 40th anniversary of the collection. When press images of the watch were first released, the watch was crucified by the online community for its “tombstone dial” (referring to the numerical script on the dial) and its exorbitant price. The watch is priced at a stratospheric USD113,400, but it is important to keep things in perspective. The original Ref. 5711/1P (non-anniversary version) introduced in 2013 retailed for around USD90,000; take inflation and the addition of diamonds into account and one can tell that Patek isn’t overcharging based on their own pricing standards. In fact, one piece auctioned by Phillips in Hong Kong went for HK$ 1,360,000 (converting to approx. USD174,000). Patek Philippe has chosen a mid-point between the regular 5711/1P’s retail and the achieved auction price. Regarding the script on the dial, it is in actuality very subtle in real life and blends in fairly well with the horizontal embossing of the Nautilus dial. The Ref. 5711/1P 40th Anniversary Edition is limited to 700 pieces, which is less scarce than the 15202IP, but you’ll probably have to jump through more hoops to obtain it than the Royal Oak. The 5711/1P 40th anniversary edition wears comfortably on the wrist. The subtle use of diamonds as hour markers deserves commendation.

Climbing down the price ladder, there is yet another option with a blue dial that is equal in quality albeit crafted in a more conventional metal. The stainless steel/blue lacquer dial 4500V, as part of the third generation of Vacheron Constantin Overseas watches, was introduced in conjunction with the 20th anniversary of the collection. One of the most interesting features of the new Overseas sports watch is the quick-release system for the straps and bracelets (rubber, leather and metal – all included as part of the purchase). This translates to convenience and style versatility. The movement has also been revamped, is now in-house manufactured, and stamped with the Hallmark of Geneva. Priced at about USD19,900, the 4500V brings the same level of watchmaking to the table at a lower price than the aforementioned Royal Oak or Nautilus. Granted that we aren’t exactly comparing like for like (the other two are made with more expensive materials), the Overseas 4500V remains an attractive alternative to the Big Two that is worthy of consideration. 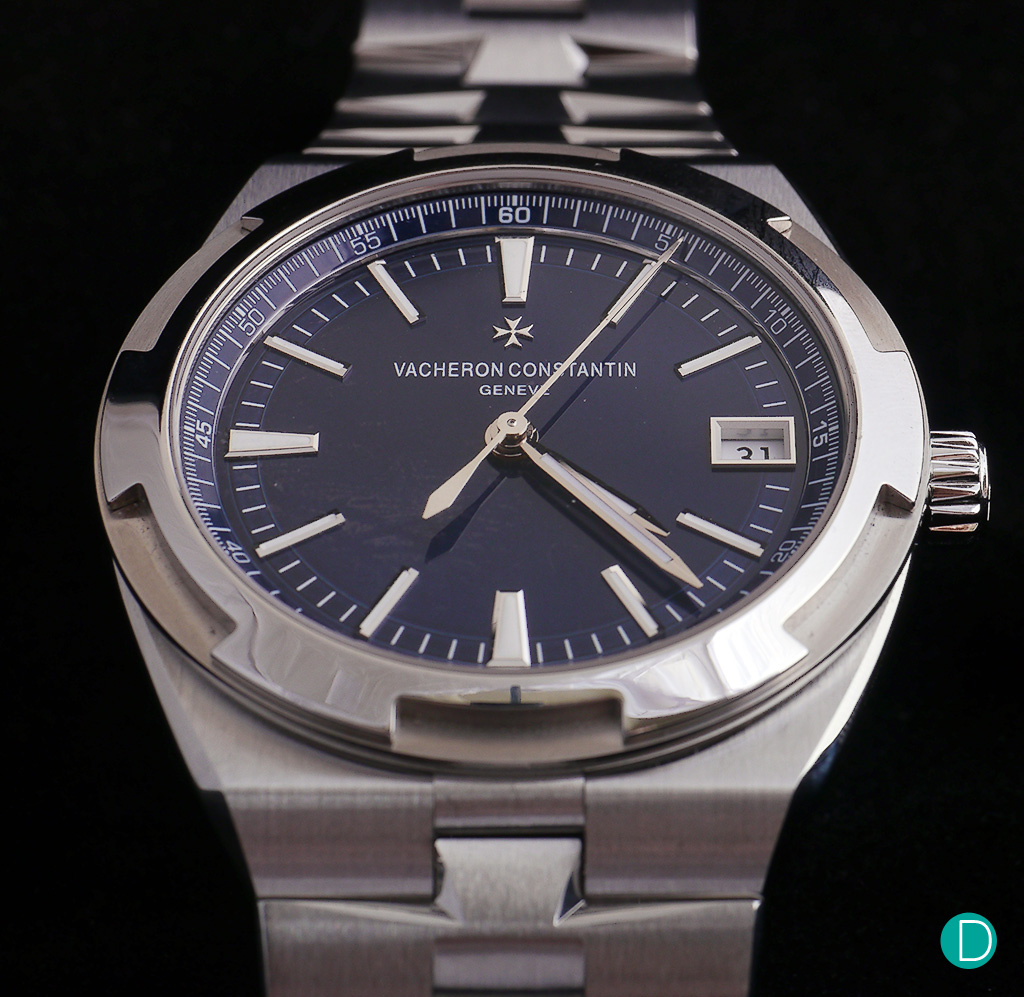 There is nothing earth-shattering about the new Royal Oak Jumbo Extra-Thin 15202IP. The fact is, it doesn’t need to be to be considered a success. Erring on the side of caution when it comes to tinkering with true and tested icons has always been considered best practice. The low-key changes incorporated into the 15202IP add a refreshing twist to the reference while maintaining the iconic look of the Jumbo.