Omega has been the watch of choice for James Bond, a British Secret Service agent, since the “Pierce Brosnan” era. Over the years, we have seen many Bond limited editions timepieces that have come along. This time round, things are a little different. Instead of the usual Seamasters and Planet Oceans, Omega will be featuring a limited edition Bond watch from the Aqua Terra collection. 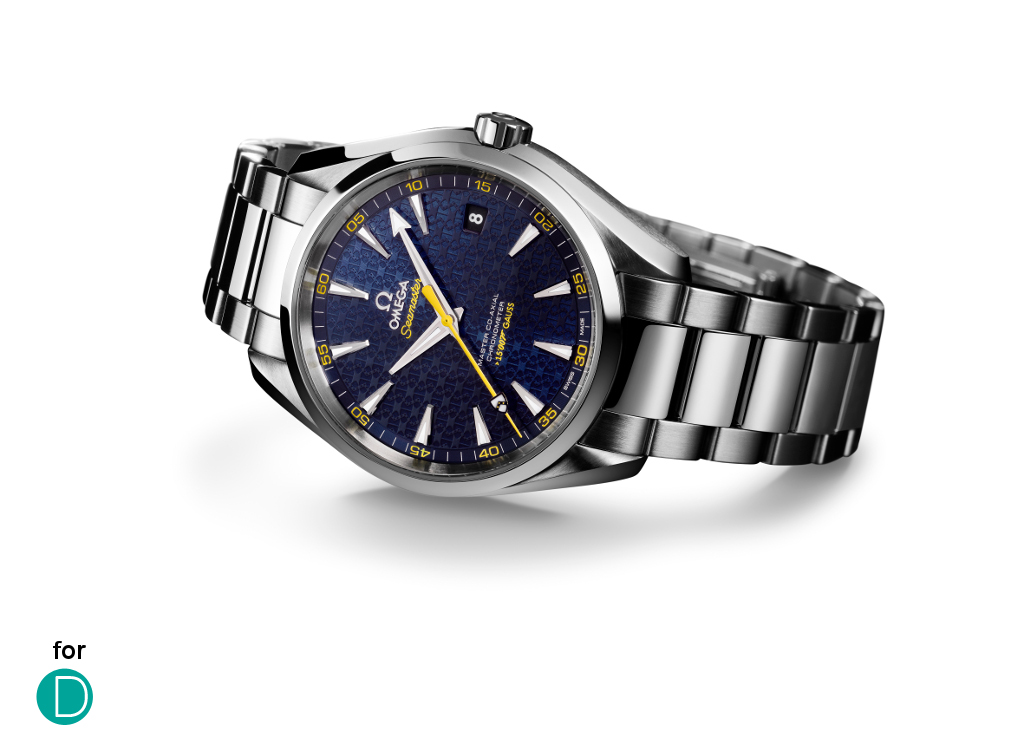 The Omega Seamaster Aqua Terra Limited Edition Bond. The combination of blue and yellow give the watch a rather striking impression.

The Omega Seamaster Aqua Terra Limited Edition Bond is created in anticipation of SPECTRE, the 24th film in the James Bond franchise. The movie is set to be released in 2015, and Omega feels that this is a good time and occasion to launch this timepiece to both the fans of James Bond and Omega.

The Limited Edition timepiece is actually based on the Aqua Terra 150M watch, albeit there are some tweaks and changes made to the original example. For the Limited Edition piece, obvious changes include the dial and the oscillating weight. The dial features the Bond family’s Coat of Arms, in which it is interlocked together to create a pattern on the dial. On the other side of the timepiece, the oscillating weight features a design that is similar to gun barrel which is synonymous with Mr Bond himself.

There are also subtle differences in this timepiece. The tip on the second hand, for instance, features the Bond family’s Coat of Arms as well. Cheekily, instead of putting the usual “>15,000 GAUSS” detail on the dial, they have changed it to “>15,007 GAUSS” to play along with the theme.

Like the other Aqua Terra timepieces, the Limited Edition timepiece features the same technology that allows the watch to have its anti-magnetic properties. Omega uses non-ferromagnetic components in the movement, which protects the watch from being magnetized under many circumstances. This ensures that the watch can remain accurate when it comes into contact with magnets or magnetic fields. The use of non-ferromagnetic components also eliminates the need to have a Faraday Cage, and allows the beautiful movement to be exposed.

The 41.5mm Omega Seamaster Aqua Terra Limited Edition Bond is limited to only 15,007 examples in stainless steel. Each timepiece will also be given a full four-year warranty, which is a testament to the confidence and quality of the watchmaking in Omega. Well, for the fans of James Bond, this is certainly one of the timepieces that is worth a look!