For part 1 of this series we showed you Paul Newman’s personal Ref 6263 Cosmograph Daytona, and today is part 2 of the series.  This particular Daytona owned by Paul Newman has a special link to his career as a racing driver.

As you would be aware, Paul Newman fell in love with motor racing during the filming the 1969 film Winning and became an active and passionate participant of the sport.

In 1995 he participated in the 24 Hours of Daytona race, held at the Daytona International Speedway in Florida, USA.  His team finished in third place overall and finished first in their respective GT-1 Class.  As Rolex is the main sponsor of the 24 Hours of Daytona race, for coming first in their class Paul Newman received a Rolex.  Which model?  A Cosmograph Daytona Ref 16520.

Engraved on the back of this timepiece is Rolex at Daytona 24, Paul Newman, Rolex Motorsports, Man of the Year 1995. 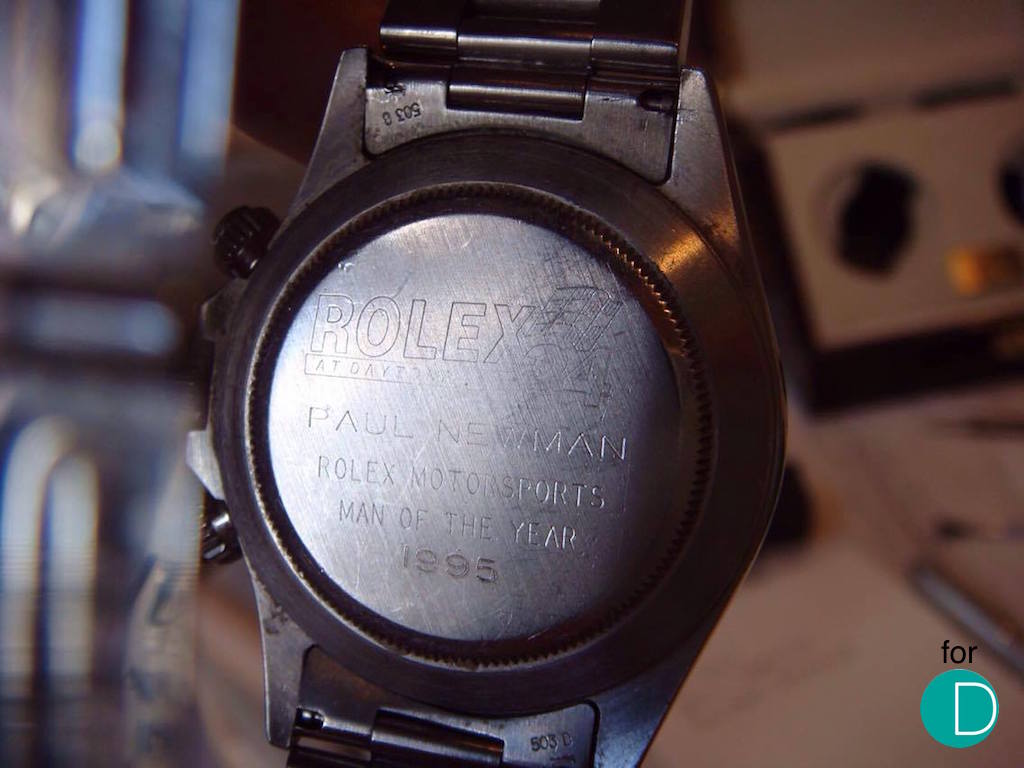 The engraved case back of the Reference 16520 Cosmograph Daytona given to Paul Newman by Rolex. Picture (C) Charles Tearle.

The Ref 16520 was the first self winding Daytona from Rolex.   Rolex chose the El Primero chronograph movement from Zenith to power the Ref 16520. Rolex modified the movements including reducing the frequency from 36,000 vph to 28,8000 vph and adding a Breguet overcoil to the hairspring.  Rolex named the movement, the caliber 4030.

In 1999, Antiquorum held an auction with Tourneau called Famous Faces.  Celebrities donated their personal timepieces, with the money raised going to charity. Pictured below is the profile of Paul Newman from the auction catalogue. The description of the Rolex Daytona donated by Paul Newman.  They make mention of the engraved case back which we showed you earlier in the article. The images of the auction catalogue come from an article from ABlogtowatch.

The Daytona sold for US$39,000. Who was the winning bidder?  Most likely Paul Newman himself, as the watch was still seen on his wrist many years later. A close up shot of Paul Newman’s Ref 16520 Daytona on his wrist. Its interesting how the cosmos works, the Rolex Daytona is named after the Daytona Speedway in Florida and Paul Newman’s name is now synonymous with the Reference 6239 Daytona that he owned and the man himself would end up racing and winning his class at the 24 Hours of Daytona.

Our thanks to Charles Tearle for proving the caseback shot of Paul Newmans Ref 16520 Daytona.