In the midst of the Olympic fever currently raging on in Rio de Janerio, we spoke to a true blue Omega collector and good Deployant Friend: George Tan about his very rare Omega Seamaster XVI Olympic Watches Ref. 2850SC. And discover a bit more about this beautiful watch, its history and understand more about his fascination with it. The story is told to us by his wife Emilyn Lee.

Many thanks to George Tan for his passion, and to Emilyn Lee for sharing with us the story.

As an Omega die-hard collector, one of the greatest achievement is to own a 1956 Olympic commemorative watch. And an even greater achievement is to have in one’s collection the even rarer pre-commercial version with the Olympic Cross of Merit on its dial. This is the story of both these watches, and George Tan’s fascination and acquisition of this grail watch. The ultra rare Omega Ref. 2850SC with the Olympic Order of Merit on the dial in colour.

We begin at the end, with the Omega Ref. 2850SC. The commercial release. This is a rare watch, and acquired by George for his collection in 2002, after searching for it for six long years. The commercial release Omega Ref. 2850SC with the XVI notation on the dial referencing the 16th Olympiad of Melbourne, Australia in 1956.

The Olympic Cross of Merit is accorded to Omega in 1952 for their outstanding service to the world of sports. Omega has been involved with the Games since 1932. A special series of watches were produced to celebrate Omega’s 25 years of official Olympics timekeeping for the Games of the XVI Olympiad held in Melbourne, Australia in 1956. This was the first time the Summer Olympic Games were held in the Southern Hemisphere, and  was held in Australian summer months of November/December instead of the usual August. (As a note this year’s Summer Games in Rio de Janerio are being held in August, and is the first time the Summer Games are held during local winter). This commercial version is rare, and in the Christie’s Sale of 14 November 2010, one example was sold.

The reason this piece piqued George Tan’s interest is because it was one of the earliest Olympics commemorative wristwatches; with the earlier editions being largely pocket watches.

This was the Seamaster XVI Olympic Watch, ref. 2850SC comes in a 34mm, 18K rose gold snap back case with special frog-leg lugs.

Encased within it, is Omega’s copper coloured calibre 471 automatic movement. The Calibre 400 series movements were the first to feature a full rotor.

The dial was silvered matt finish with lozenge form appliqué markers with minute markings. The hands were Dauphine styled, and the case had a snap on back with a raised Olympic seal. The case also featured fancy “Frog Leg” lugs. The dial of the commercial model is silvered matt finished with appliqué markers and Dauphine hands. The crystal is domed. Note the fancy “Frog Legs” lugs.

With this watch in his collection, he started acquiring the memorabilia associated with the 1956 Olympics. This included:
– the Omega 1956 Olympics watch advertisement,
– the Instructions papers,
– the official Olympics stamps issued by Omega,
– the unsigned warranty certificate,
– the commercial Olympics wrist watch box (the inner of the box is inscribed “The Olympic – Omega”),
– the Omega leather strap and buckle etc

But this was not enough for George. He was even more psyched to acquire the even rarer examples of the Omega XVI Olympiad watch. Omega had produced approximately 100 pieces of a prototypes prior. These were known to collectors as the pre-commercial release series. These were seen with variations on the Cross of Merit where the Olympic rings were either of a single colour or in 5 different colours on the dial. The latter, comprising of five different coloured interlocking Olympic rings, is the rarest; as it is more time-consuming to produce thus fewer in quantity. An example of the Ref. 2850SC with the Medal of Merit and Olympic Rings in one colour was auctioned by Sotheby’s in 19th April 2010 for US$ 5,000. Other examples in auctions with realized prices can be found at this link. The pre-commercial release Omega Ref. 2850 SC with the Medal of Merit logo on the dial. This example, acquired by George, is the rarest version, and shows the Olympic rings in 5 colours.

Approximately 100 of these were made as “prototypes”, which collectors now call pre-commercial release watches. And these bore the Olympic Cross of Merit on the dial. These were later recalled by Omega, as it was learnt that they did not have the rights to use the Cross of Merit, and in the commercial release, the dial bore the Roman numeral XVI for 16th Olympiad. In 2008, George hunted down and bought an example of this pre-commercial model – the one with the Olympic Cross of Merit, with the 5 different coloured interlocking rings on its dial, which we show in the photographs here. This was rarer than the rare. This was the dial before the major changes were made with the  Order of Merit emblem being replaced by the Roman XVI. We see that in this earlier version, the minute track was not present, but the lozange appliqué markers were in the design. The hands were Dauphine shaped but now featured a slit cut in the middle, although examples of Dauphine hands with no slit have also been seen. The case was a snap back water resistant case. The domed crystal and the fancy “Frog Leg” lugs also remain unchanged and add to the charm of the watch. The case back on the Omega Ref. 2850 SC showing the engraving of the Medal of Merit. Note the amazing patina of the rose gold case back.

The movement was the Omega Caliber 471 automatic movement, 19 jewels, which Omega retained for the commercial release.

He then sighted the prototype watch box in 2012 in an online auction. The Omega Ref. 2850SC and the pre-commercial release Omege Ref. 2850SC on the very rare pre-release box, with the Olympic Medal of Merit medallion.

This box is unique to the hundred pieces mentioned above as it has the Olympic Merit of Cross applied on its cover. It is said that this box is even rarer as many would have likely have been misplaced or lost by its owners. A frantic bidding ensued but in the end, George emerged as the winner. Almost immediately, he received several offers to purchase the entire collection.

Despite these offers, George has no intention of selling of his prized collection as yet. He truly enjoys the journeys of watch collecting. 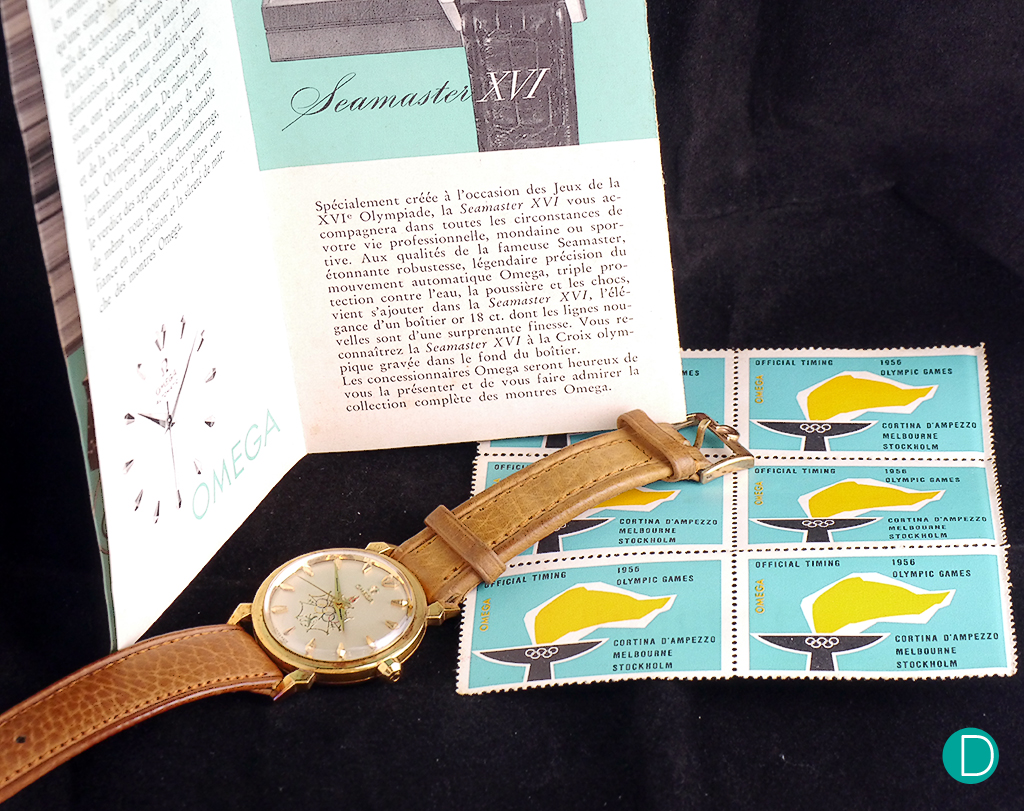 The pre-commercial Omega Ref. 2850SC with the stamps issued by Omega to mark the XVI Olympiad, and the promotional leaflet.

During every Olympic season, this collection becomes the talk of the town among collectors as they remain the only models, apart from 1976 Olympic chrono-quartz edition, to have the Cross of Merit on their case backs.