In addition to the A. Lange & Söhne leading edge Triple Split we covered here, Lange also announced several facelifts to the existing range of products. Here we cover the Lange & Söhne novelties for 2018: the new 1815 Chronograph, the new Little Lange 1, the new Saxonia range with updates on the time only, the outsized date and the outsized date with moonphase. This is in addition to the 1815 Jumping Seconds “Homage to Walter” Lange which we covered here. The new 1815 Chronographs in pink gold.

Two new dial variations announced in pink gold. The 1815 is a chronograph with a flyback function and a pulsometer scale, and will be available with black- or argenté-coloured dials.

The same movement is used in the new releases, the time tested and very reliable L951.5. All specifications remain the same as the existing 1815 Chronograph except for the case metal and dial colour. Three new variations to the Little.

Three new variants to the venerable Little Lange 1 is announced. All come with a guilloche gold dial and colour coordinated alligator straps. Perhaps Lange is targetting these novelties at the increasingly popular ladies segment. Two white gold versions with purple or grey dials and a pink gold version with a brown dial is offered.

The movement powering the new variants remain the L121.1, which is also used in the regular Lange 1. 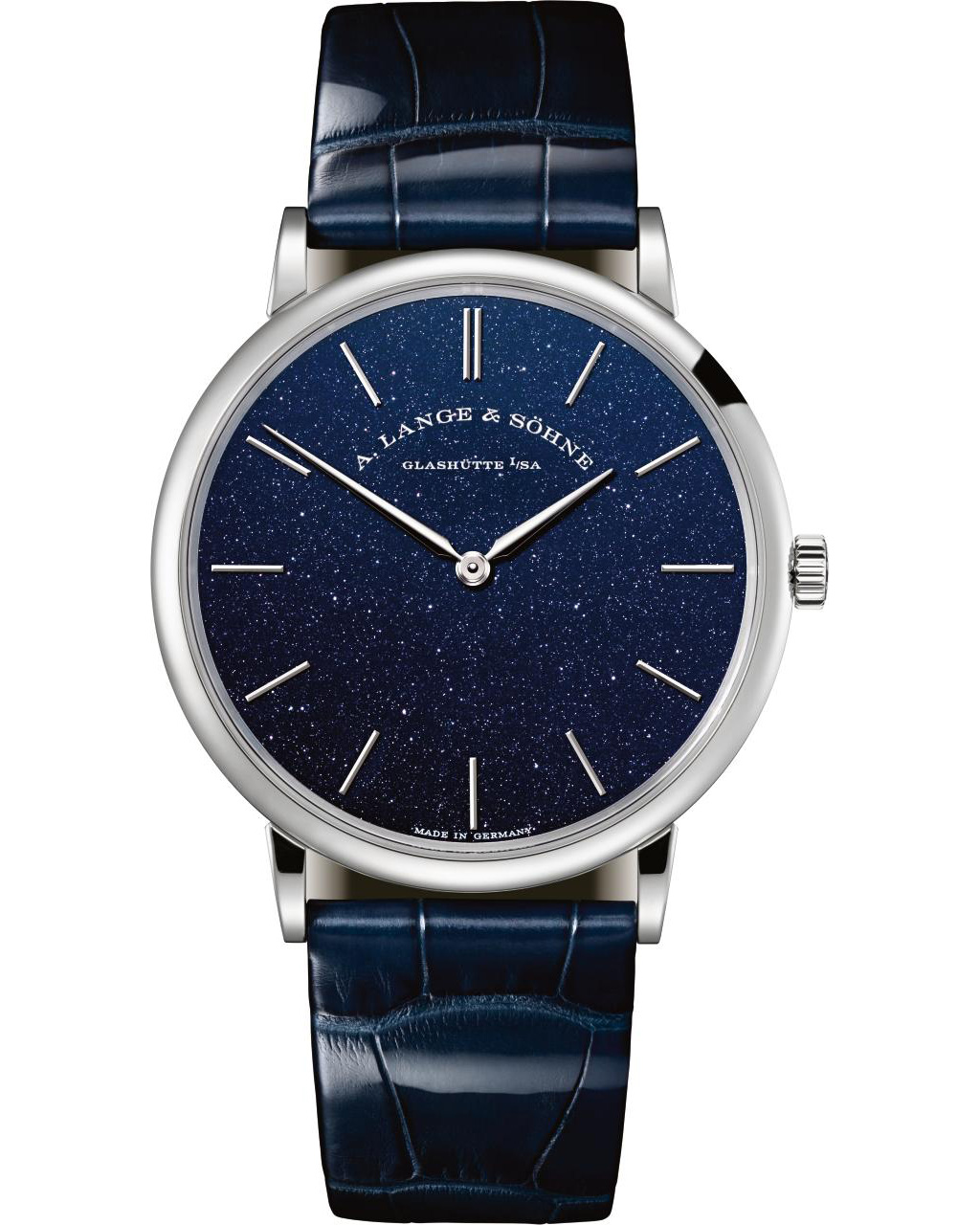 The Saxonia Thin, entry level model is extended with a white gold version with a magnificent copper blue dial.

The new copper-blue dial is crafted from solid silver and coated with a thin layer of shimmering goldstone. The manufacture process is quite special, and was developed in Venice in the 17th century. Miscropically small copper ozide crystals saturate the deep blue of the dial base and shimmer in a manner reminiscent of stars in the midnight blue sky.

The movement also remains unchanged with the L093.1, measures only 2.9mm high, and cased in the white gold case measuring 39mm diameter by 6.2mm thick. This represents a return to one of the four watches introduced by Lange in 1994. The original Saxonia with Outsized date has been discontinued for several years now, and the model now returns with an updated size of 38.5mm (compared to the original 35mm case), and with a new automatic movement: the L086.8, with an autonomy of 72 hours.

The new watch is first introduced in two variations: one in a white gold case and the other in pink gold, both with a black dial. The novelty in the Saxonia Moonphase is the new black dial. All other elements remain the same, including size, and movement – the L086.5.