Luminox first released the Navy SEAL 3580 series in May 2018, the latest evolution of the Navy SEAL collection. Consisting of five models, the series sports several exciting new features including a chronograph function and CARBONOX casing. The watch measures 45 mm in diameter and 13 mm in height. It is cased with Carbonox, a carbon compound material developed by Luminox. Carbonox bears the advantages of lightweightness, scratch resistance and increased strength relative to forged carbon cases. Stylistically, the black case has a sand-blasted finish and has a stealthy look congruent to its design theme. As with most tool dive watches, the Luminox Navy Seal 3580 is fit with a uni-directional rotating bezel, primarily used as a countdown timer during dives.

Other features include the double gasket stainless steel crown which enables water resistance up to 20ATM. The lume on the watch, shown here with crown up position.

Additionally, Luminox Light Technology (LLT) provides unmatched night visibility through a self-powered illumination system that lasts up to 25 years without requiring an exterior light source or the push of a button. Each model of the 3580 features 15 LLT elements, including the bezel, indexes, and not forgetting the hour and minute hands for a quick glance of time in any light conditions. This illumination system is essentially micro-gas tubes filled with H3 or tritium, that glows independently of a lightsource. 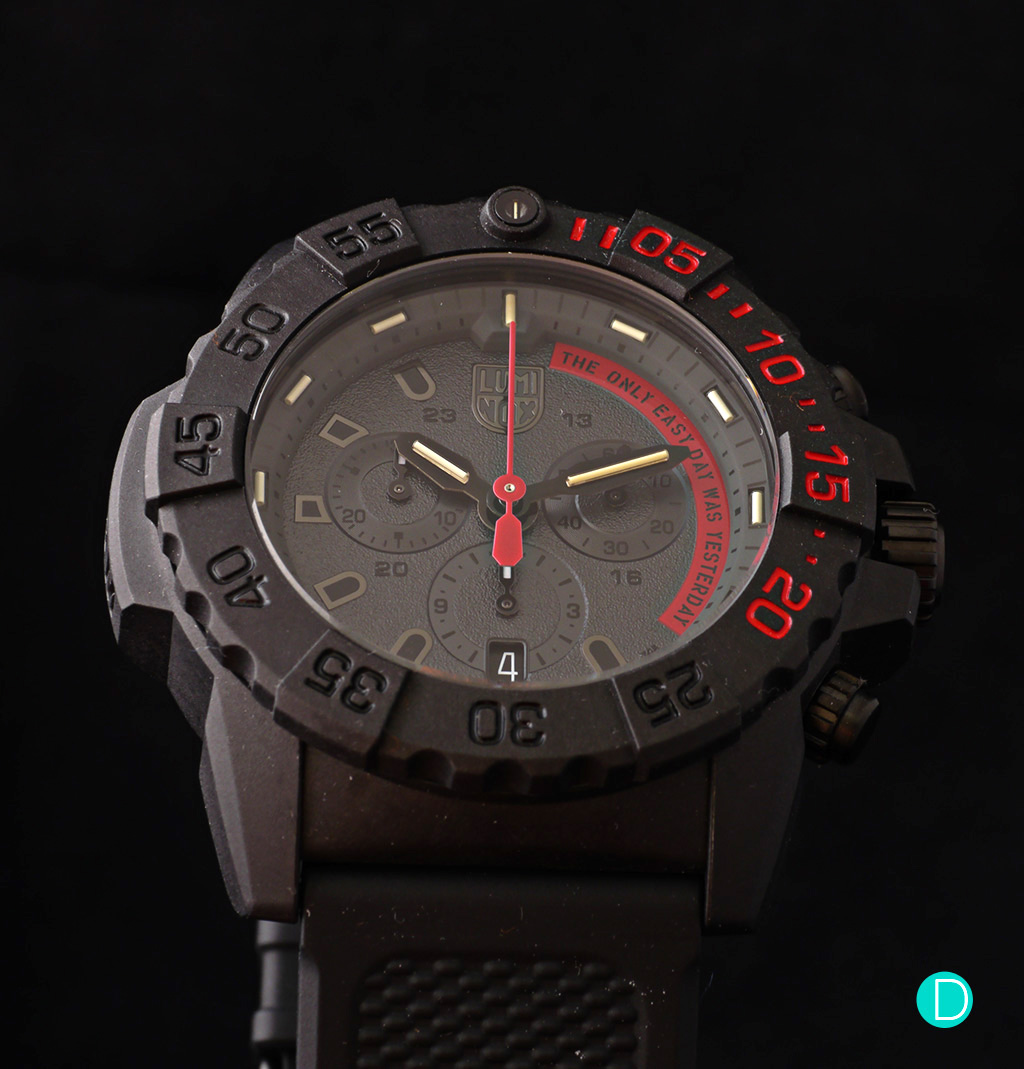 The glass used is Hardened Mineral Crystal, that is more impact resistant than Sapphire Crystal. The downsides of the crystal is the lack of anti-reflective treatment that would otherwise improve the clarity of the black dial.

Weighing 84g, the watch leans on the lighter side considering its larger case size. The movement is a standard quartz chronograph movement made by Rhonda. While this is a run of the mill standard movement, it is unspectacular, but is expected to operate reliably and accurately with no fuss.

But addressing the elephant in the room, the watch is still the most attractive for its ‘The Only Easy Day Was Yesterday’ emblem, which makes it the most iconic in the collection. The watch is priced at US$790 or S$845.30. The watch is water resistant to 200 m and comes with an engraved closed caseback. The Luminox Navy Seal Chronograph collection is an excellent timepiece, and one which is very attractive. Indeed, it has gained many admiring glances from the general public each time we wear the watch. It is good-looking, collectible (on backorder frequently), and easily the most iconic of this year’s release. That said, while it aces ahead of its brethren in the looks department, the watch is arguably more aesthetic than utilitarian. So if you are looking for the ultimate Luminox tool watch, we might suggest another model.

For starters, a black dial, black hands combination makes time reading difficult in daytime conditions. And for those that like the appeal that the watch is worn by Navy Seals in combat, they might soon realise that an analog chronograph display is not as practical on the field. Luminox 3500 with large numerals on the dial and the bezel make for easy viewing, and the red seconds hand is a nice touch.

Considering that a chronograph is more cosmetic than it is realistic, a time-date diver Luminox is in our opinion a better representative of the brand’s tool-watch utility than its chronograph lines. For instance, the Luminox Navy Seal 3500 series or the ANU (Authorized for Navy Use) 4220 series are timepieces we find that are ‘more’ Luminox than the rest; with the ‘Back to Basics’ notion of a military-inspired timepiece.

Then again, for those who collect Luminox watches, they might already have the above mentioned watches in their collection, and are now looking for something that looks good for the ‘easier’ days in civvies.