With the dust finally settled at the Palexpo post-SIHH 2018, it is time to take a more detailed look at the timepieces that have made their debut. Never failing to impress at SIHH is A. Lange & Söhne. The illustrious Saxon manufacture had presented several novelties at the fair this year, one of which was the 1815 ‘Homage to Walter Lange’. The 1815 ‘Homage to Walter Lange’ was conceived in memory of Walter Lange, the spiritual figurehead of the brand since its revival in 1990 who sadly passed away on the second day of SIHH last year at the age of 93. More than just a tribute piece, the watch also features an atypical, but interesting complication. Here, we bring you the details and our thoughts surrounding the all-important 1815 ‘Homage to Walter Lange’. Walter Lange, photographed in Glashütte, circa 2010.

The 1815 ‘Homage to Walter Lange’ comes in a case measuring 40.5 mm in diameter and 11.0 mm in thickness. Four different case materials will be offered: pink gold, white gold, yellow gold, and a piece unique stainless steel. The case is stock standard Lange, which is to say that it is austere in design but very handsomely finished. While the bezel and lugs are polished to a bright sheen, the case band is brushed for a nice contrast. Apart from the crown at the usual 3 o’clock spot, there is also a pusher at 2 o’clock on the flank of the case.

The 1815 ‘Homage to Walter Lange’ comes in a standard casing of either pink, yellow or white gold. A piece unique in stainless steel will only be available through auction where proceeds go to charity.

Moving on to the dial, one can easily recognise that the watch is an 1815 model, with its inky Arabic numerals and railway-style minutes track. These dial design elements are inspired from old pocket watches created by Ferdinand Adolph Lange, the brand’s founder. The dials in each version of the watch are made of solid silver. In the gold variants, the dials are argenté-coloured while in the special stainless steel edition, it is black enamelled. All the hands in the gold pieces – the hour, minute, central seconds and subsidiary seconds hands – are evenly flame-blued. They bring an energetic pop of colour to the clean silver dial and really stand out. The inky black Arabic numerals and railway track minute scale are tell tale signs of a Lange timepiece from the 1815 family.

By now, you should be wondering why there are two seconds hands (if you haven’t already seen the watch). The two seconds hands don’t exactly function the same way. The one in the sub-dial at 6 o’clock moves in a sweeping motion, making 6 small steps as it advances from marker to marker; this is the hallmark of mechanical timepieces in general. On the other hand (pun not intended), the central seconds hand performs precise jumps from second to second. This is achieved via a mechanism called the deadbeat seconds, or ‘jumping seconds’ in Lange speak. In the 1815 ‘Homage to Walter Lange’, the jumping seconds can be allowed to run continuously or immobilised if needed – the pusher at 2 o’clock starts and stops it. The jumping seconds hand with the start/stop function was especially significant for Walter Lange. This is because it dates back to an 1867 invention by his great-grandfather, Ferdinand Adolph Lange. It was first implemented in a masterpiece crafted by his grandfather, Emil Lange. One of Germany’s first patents was granted to A. Lange & Söhne in 1877 for the enhanced design of a mechanism on the three-quarter plate, and was referred to as a “one-second movement with a jumping hand”. Lange’s second morte (deadbeat seconds) complication dates back to 1867; the first designs of the complication were by Ferdinand Adolph Lange, the brand’s founder.

The movement that powers the 1815 ‘Homage to Walter Lange’ has a special calibre designation: L1924 – it refers to Walter Lange’s birth year. The 253-part, 36-jewel manually-wound Calibre L1924 has an above-average power reserve of 60 hours while beating at a stately 21,600 semi-oscillations per hour. Its design was inspired to a great extent (arguably even more so compared to other Lange calibres) by a particular old Lange pocket watch: the No. 13354. On the pocket watch, an excerpt from ‘A. Lange & Söhne, The Watchmakers of Dresden’ by Reinhard Meis reads:

“There were several developments of pocket watches with seconde morte jumping seconds at A. Lange & Söhne. The first designs were by Aldoph Lange in 1867, with a mechanism for the seconds between the plates. In 1877, the mechanism was set above the 3/4 plate, and patented, as in the pic (640*641). The bridge for the seconds wheels, and the release lever went through several modifications. The jumping seconds hand could be started and stopped but not zeroed. Some 280 plain watches were fitted with this device, as well as another 40 complicated movements (chronograph, date, calendar and quarter repeater).” Page 239 of Reinhard Meis’ book, ‘A. Lange & Sohne, The Watchmakers of Dresden’, showing the movement (plate 641) and the watch (plate 640) of a jumping seconds watch which the 1815 ‘Homage to Walter Lange’ is based on. Note the jumping seconds bridge, the pawl mechanism wheel and the coordinating cam in the original. The same bridge, pawl mechanism wheel and a column wheel appears in the Calibre L1924.

In the Calibre L1924, the seconds jump is controlled according to the flirt-and-star principle, as was originally the case in the historic mechanism. After each full second, one of the six tips of the star liberates the tensioned lever arm, which watchmakers refer to as the ‘flirt’. It then swiftly rotates full circle before it is stopped by the next tip. This motion sequence causes the seconds hand to advance by one marker. The ratchet wheel located above the three-quarter plate has a dual function: it stores the power necessary for the seconds jump, and at the same time causes the central seconds hand to stop. Detail of the wheel with the pawl mechanism.

From a finishing standpoint, the Calibre L1924 is exceptional, as one would expect from A. Lange & Söhne. The top surface of the untreated German silver plate and bridge is sensuously textured with Glashütte ribbing while the edges are bevelled and polished to perfection. The heat-blued screws, gold chatons and gold-filled engravings add a welcomed splash of colour to the otherwise grey expanse of German silver. The other ‘usual suspects’ are also present, like the black polished swan neck regulator and column wheel, the evenly circular-grained baseplate, and the hand-engraved balance cock. Interestingly, the ratchet wheel (the one next to the click) features a double snailing finish which, to the best of our knowledge, has not been done in any contemporary Lange movement. The purchasable gold variants of the 1815 ‘Homage to Walter Lange’ come in limited editions: 145 pieces in white gold, 90 in pink gold and 27 in yellow gold. These seemingly random numbers are actually derived from important milestones of the Lange family’s history. From 7 December 1845, when Ferdinand Adolph Lange originally established the company, exactly 145 years elapsed until 7 December 1990, the date on which Walter Lange registered Lange Uhren GmbH. Precisely 27 years had passed between this date and 7 December 2017, the date on which the tribute timepiece to Walter Lange was unveiled. The price set for these gold models are the same across the board: EUR47,000 inclusive of German VAT. How does the 1815 ‘Homage to Walter Lange’ compare to Lange’s only other timepiece featuring jumping seconds, the Richard Lange Jumping Seconds? While the two timepieces do share a common technical complication, they are very different beasts. The Richard Lange displays time on a regulator-style dial and has a power reserve indicator (the triangle at 6 o’clock turns red when there is just 10 hours of power reserve left). Unlike the 1815, there is no pusher-actuated start/stop function for the jumping seconds. Display wise, the seconds hand in the Richard Lange jumps just like in the 1815 but the movement that makes it happen is more sophisticated, featuring a constant force mechanism and even a useful zero reset mechanism. Picking one over the other is difficult as they both highlight the jumping seconds complication excellently and are on-par in craftsmanship. That said, due to a more complex movement, the Richard Lange Jumping Seconds comes with a heavier price tag: EUR73,000 for the pink gold version and EUR78,000 for the platinum version pictured below. 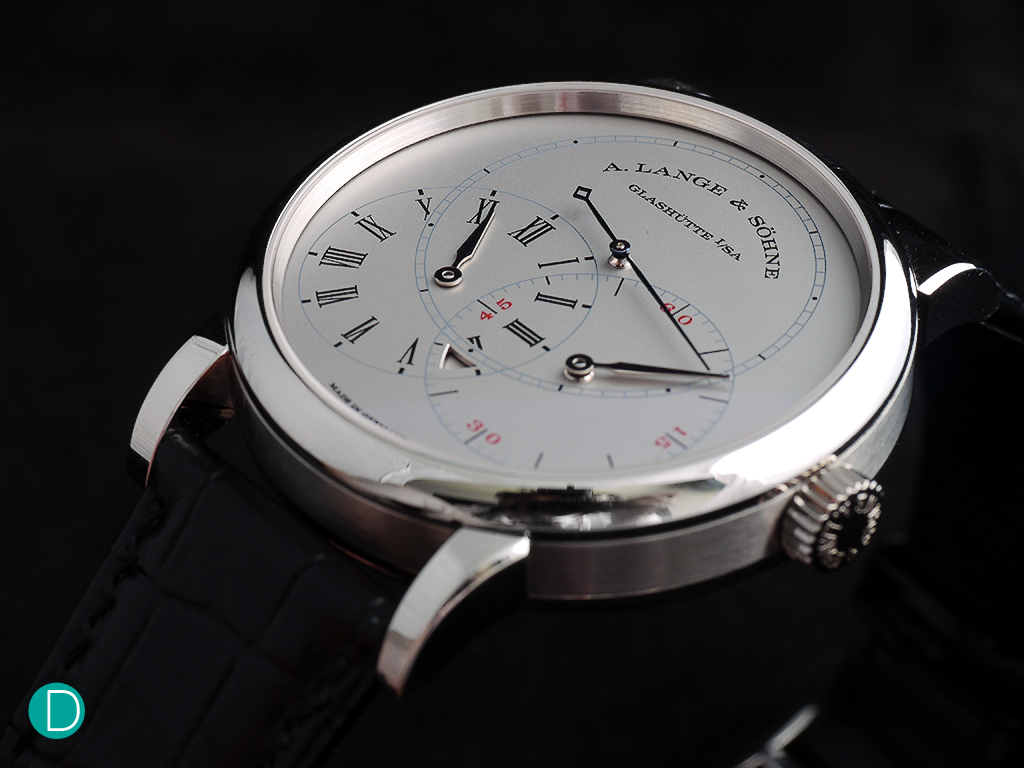 If you look away from the A. Lange & Söhne catalogue and down the pricing ladder, one timepiece that should catch your eye is the Jaeger-LeCoultre Geophysic True Second. The Geophysic True Second is a time-and-date-only dress piece with perks. Firstly, it features Jaeger-LeCoultre’s avant-garde Gyrolab balance. According to the manufacturer, the unique double ‘JL’ shape of the balance allows for better precision; its smaller size also improves efficiency. The hacking mechanism also deserves a mention. When the crown is pulled out to position 1, the watch is not hacked, but the hour hand can be adjusted  in one hour increments. This handy feature allows one to change time zones without losing the synchronized timing. Then of course, there’s the deadbeat seconds or ‘true second’ mechanism, which is Jaeger-LeCoultre’s preferred term. For a deeper understanding of the mechanism in the Geophysic, we recommend that you read our detailed review of the watch here. While the movement is not a recipient of hardcore hand finishing unlike its Lange cousins, it is still one hell of a movement. Priced at around EUR8,500 for the steel variant and EUR17,600 for the rose gold upgrade, the Geophysic True Second offers unparalleled value for money. It is a more accessible, worthy alternative to the Richard Lange Jumping Seconds or the 1815 ‘Homage to Walter Lange’.

A pair of Geophysic True Seconds, in rose gold and stainless steel.