As some of the readers may know, I am currently an Airman (not a pilot though) in the Republic of Singapore Air Force. Being a watch enthusiast, I tend to observe and interact with other airmen, and gaining an insight on the kind of watches that they are wearing.  This sort of leads me to question the existence of pilot watches: Are they really useful, or are they just mere novelty pieces? In this mini-series, we shall find out if certain “pilot” watches are worthy of their namesake, or are they pretenders to generate income for the company.

Pilot watches, as the name suggests, are instruments used by pilots to assist them in their endeavors. The first pilot watch is the Cartier Santos, a watch created by Louis Cartier for a friend who found it cumbersome to use a pocket watch to tell time while flying. In wartime, pilot watches were used for more sinister reasons: to precisely time the coordinated attacks.

Over the years, many pilot watches came and went. Some succeeded and became icons. Others faltered and disappeared. For the first episode of this mini series, we are featuring something ubiquitous from the iconic IWC’s Pilot range: the Pilot Chonograph. To add a little bit of excitement, what we have here is the “Top Gun” version, which means that it is a little different in terms of physical appearance from the usual Pilot Chronograph. Does wearing it makes a person feel like Maverick or Iceman? We shall find out! 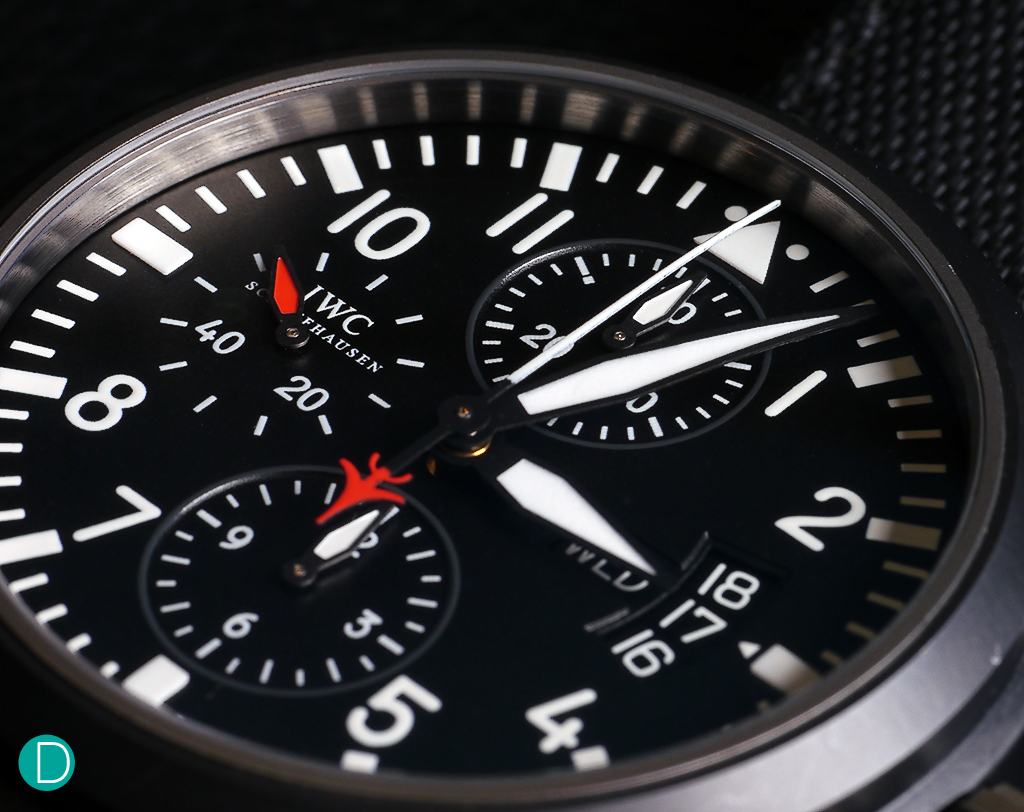 The IWC Top Gun Chronograph. It looks rather mean at first glance, thanks to the black ceramic casing and the black dial.

When we first received this watch, we thought that the IWC Top Gun Chronograph was actually rather handsome looking. The ceramic casing, as well as the black dial, gave the watch a really mean and “no-nonsense” look. Coupled with the red second hand on the sub-dial and the red plane motif at the end of the chronograph needle, the IWC Top Gun Chronograph looks as cool as Maverick’s F-14 Tomcat (coincidentally, Maverick’s helmet shares the same color scheme of black, white, and red as well).

Subsequently, we strapped the 44mm watch onto our wrist. The watch has a nice wrist presence, without a shadow of doubt. While 44mm may seem huge, it is actually quite comfortable on the wrist. It is not obtrusive or cumbersome, either due to my fat wrist or the design of the case and lugs. We prefer the latter explanation though! The caseback of the Top Gun Pilot Chronograph. As an airman, I thought this was really nice.

The IWC Pilot’s Watch Chronograph “Top Gun” (reference IW3789-01) is basically a slightly expanded IW3777-01 in disguise. The IW3777-01 is a Valjoux 7750- based chronograph, which also features a day and date display function. The only few differences between the “Top Gun” and the standard variant would be the casing, caseback, as well as the subtle detailing on the dial.

The ‘Top Gun” variant features a case made from ceramic, which is hard but brittle. This meant that while it is less prone to scratches, it cracks or breaks more easily.

The caseback is pretty special too. It features the glitzy “Top Gun” emblem, made famous by the 1986 flick. It adds a really nice touch to a pilot’s watch, especially if you are a fan of Top Gun. Or if you are a pilot from the actual Top Gun Fighter Weapon School. 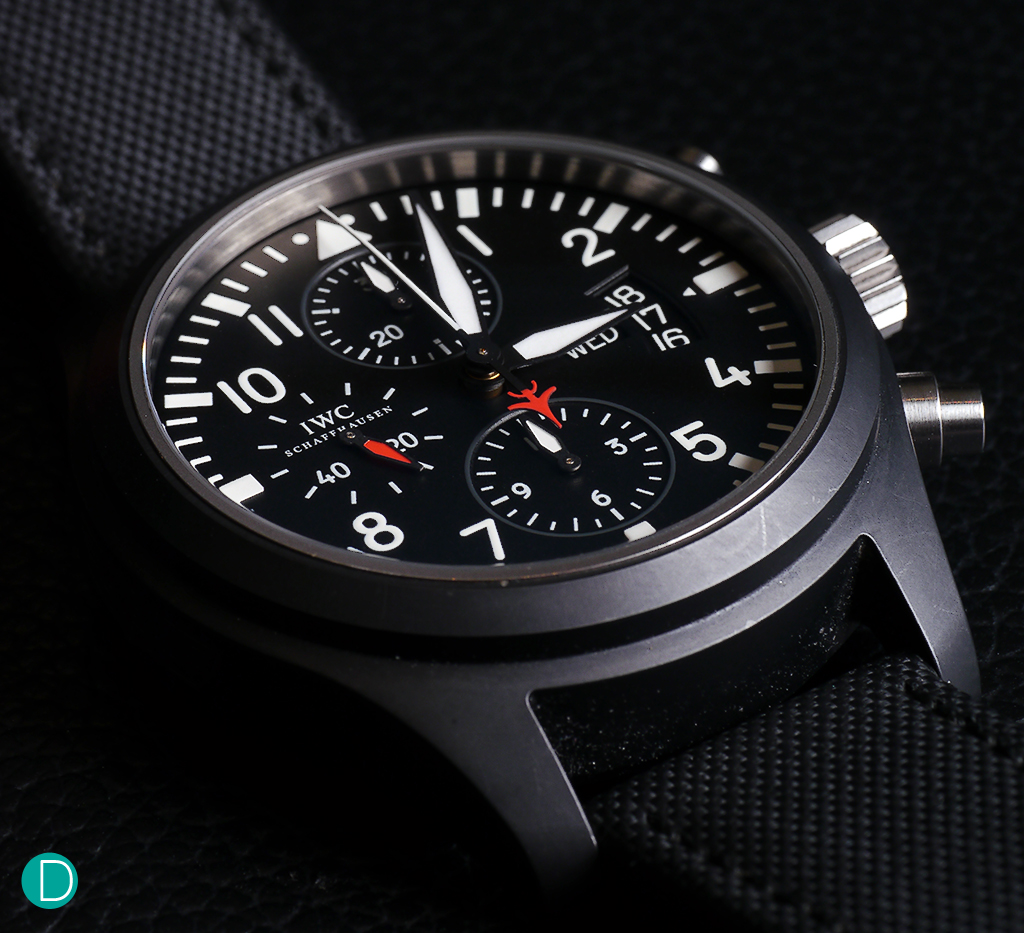 Would I like to have the Top Gun pilot Chronograph? Yes. Is it really functional as a pilot’s watch? Hmm….

This watch has been with me for nearly a month now. It looks surprisingly good with the blue Air Force uniform, although we thought that it will look even better with a pilot’s flight suit. The watch is unmistakably cool, no doubts about that. But we seemed to have been distracted by its looks.

Yes, the Top Gun thingy is a little gimmicky, no doubt. The idea behind it is to flutter the hearts of Top Gun fans, like us. We do admit that we are fans of Top Gun, and that was why we kind of like this timepiece. Admittedly, it adds a neat touch to a pilot’s watch as well.

In terms of functionality, there are certainly room for improvement. A stopwatch or a chronograph is a welcoming feature, as it helps a pilot to keep track of their manoeuvres and flight duration. What is disappointing is the lack of lume for the sub-dial counters; this meant that the function is rendered useless at night (unless there is sufficient illumination in the cockpit).

As for the date display, while it is nice that IWC borrowed some design cues from the altimeter, we thought that it is a little redundant. In fact, the date display makes the dial a little cluttered. We could certainly make do without that; a normal single date display would suffice. There are hits and misses, but we do think that this watch managed to take our breath away. Somehow.

Did the watch take our breath away? Yes. But have we lost that loving feeling? Yes and no. It is a good looking watch, but there can be some tweaking to make it even better. We understand that there is an improved version (reference IW3880-01) with the flyback function, but it seems like certain issues that we have brought up here were not corrected. That aside, we really like the way it looks. It is heaven in our eyes, indeed.

Note: The watch is owned by a gentlemen collector.