We all have a grail watch, or watches. Some people define the grail watch as something they will not be able to obtain in their lifetime. Some define it as something just along the border between difficult and impossible, be it financial or availability. Sometimes it’s oddly specific, down to the detail of the type of font used or year of production. Sometimes it’s as vague as “I want a Richard Mille”. Here, I tell my personal story, of my choice and chase of my Grail Watch. In my early years of watch collecting, I didn’t really identify a particular Grail Watch. There were just two broad categories for me: Affordable and Not Affordable. Back then, pieces I thought could be labelled as my Grail Watch automatically usually fell into the Not Affordable category- masterpieces such Jaquet Droz Bird Repeater and Van Cleef & Arpel Midnight Planétarium just to name a few. I guess that’s the case for many of us. Every year (except this) we see novelties released at SIHH and Baselworld and go a little crazy watching videos and reading reviews, and then a little disappointed when we find out the price. We then park these Grail Watches at the back of our minds, only to be admired but probably never to be acquired.

State of my collection

My early years, and even current state, of watch collection had no strong trend. I bought watches that I liked and were comfortably in the Affordable category. As I learnt more and appreciated the history and characteristics of various brands, I became unknowingly attracted to a few brands and traits. Brands like Cartier and Grand Seiko had an early presence in my collection laid the foundation for the growing collection. I learnt about independent brands such as Voutilainen and Grönefeld which were extremely desirable and exciting but remained locked in the Not Affordable category.

Among these discoveries was a slow and steady learning of A. Lange & Söhne (ALS) as a watch manufacturer. With more research, I got more and more interested. What was really exciting was that some of their grail-worthy pieces might, surprisingly, just tip over to the Affordable category. It became something I could work towards.

With endless possible watches that I could label as my Grail Watch, I thought I should set some boundaries. A Grail Watch had to be something I could work towards. While a good watch need not be expensive, the Grail Watch would likely cause a dent in the bank but not exactly bankrupting. I decided that my Grail Watch would be something with the highest level of finishing, have a fantastically engineered movement, not overly mainstream (read: Daytona, Royal Oak, Nautilus). These were generic requirements of what would be my Grail, and indeed it took a while before I chanced upon something that I thought was The Grail Watch.

Of all A. Lange & Söhne collections, Lange 1 was mysteriously intriguing. The dial layout was irregular yet it felt like everything was in place. The finishing is absolutely top notch and I’ve been nursing this biasedness for ALS. Although it checked off all boxes and I liked it very much, the Lange 1 was not my grail watch. My initial thoughts were that it looked better on the shelf than on my wrist as the case size and lugs were rather big for me. 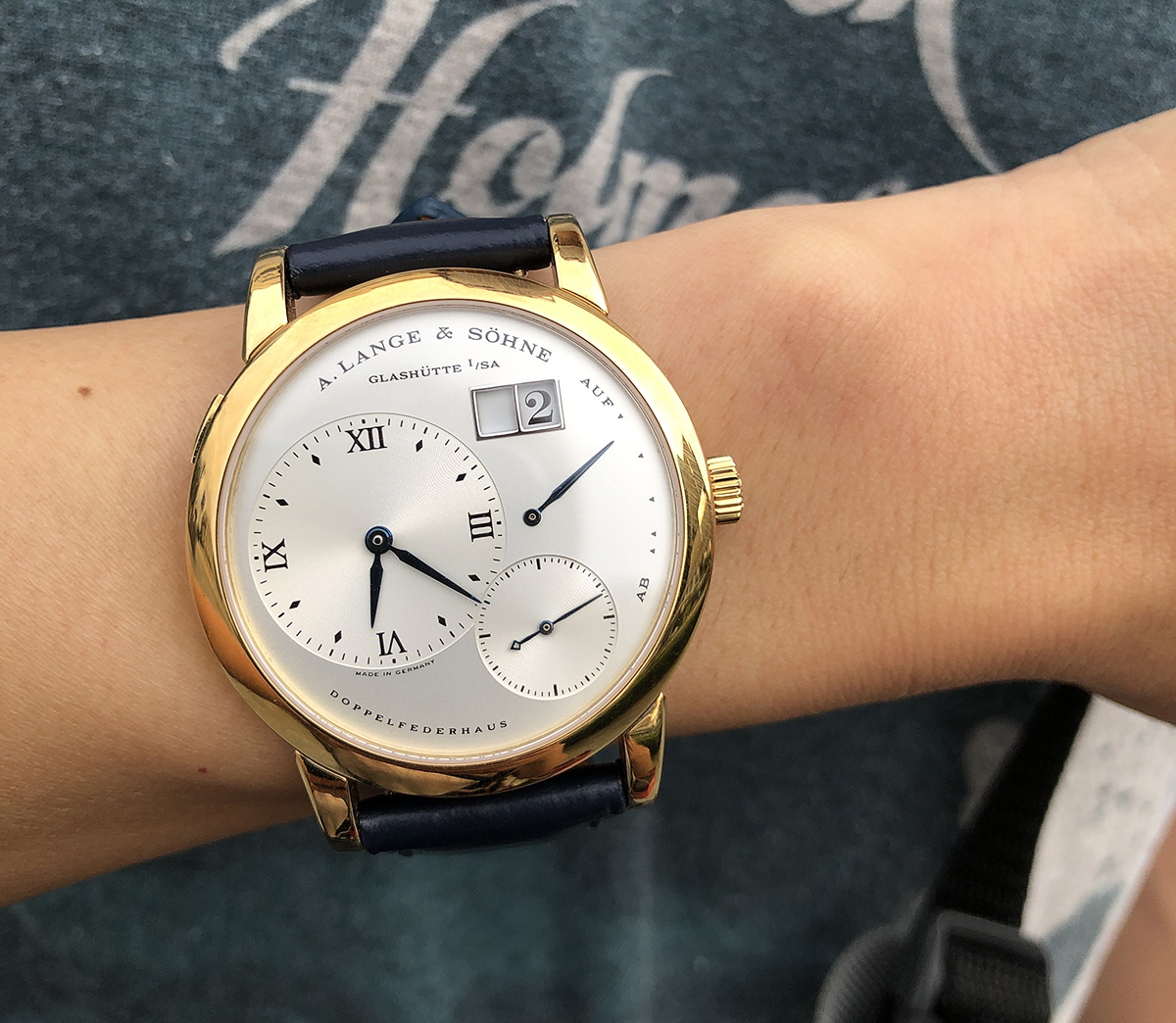 The first wristshot, just minutes after being a proud Lange owner.

All that changed in 2016, when the Lange 1 Moon Phase was upgraded, and it included a new Day/Night disc. (The upgrade was in 2015, but I didn’t keep close tabs on new releases until I chanced upon it in store). I went into the boutique and they had the Rose Gold Lange 1 Moon Phase (Ref: 192.032). The sales assistant demonstrated the new Day/Night function and I was swept off my feet. The Day/Night disc was absolutely breathtaking. I was completely awed by the ingenuity of stacking the sapphire Moon Phase disc over another Day/Night disc. The execution was also perfect- not overly ostentatious but still making a strong statement. There and then, I thought I met my Grail Watch- Lange 1 Moon Phase with Day Night Indicator in Rose Gold, Ref: 192.032.

It was something along the border of difficult and impossible in financial terms. In terms of availability, it’s still in production and could be found in boutiques and Authorized Retailers with relatively short waiting times. I was not financially ready for the watch from the boutique, so I waited and prowled for that exact reference on the pre-owned market. I was also very wary of grey market pieces as I did not want to support the grey (some say black) market. While waiting for it to appear on the pre-owned market, ALS had about 3 price revisions, each time pulling the price further from my reach. 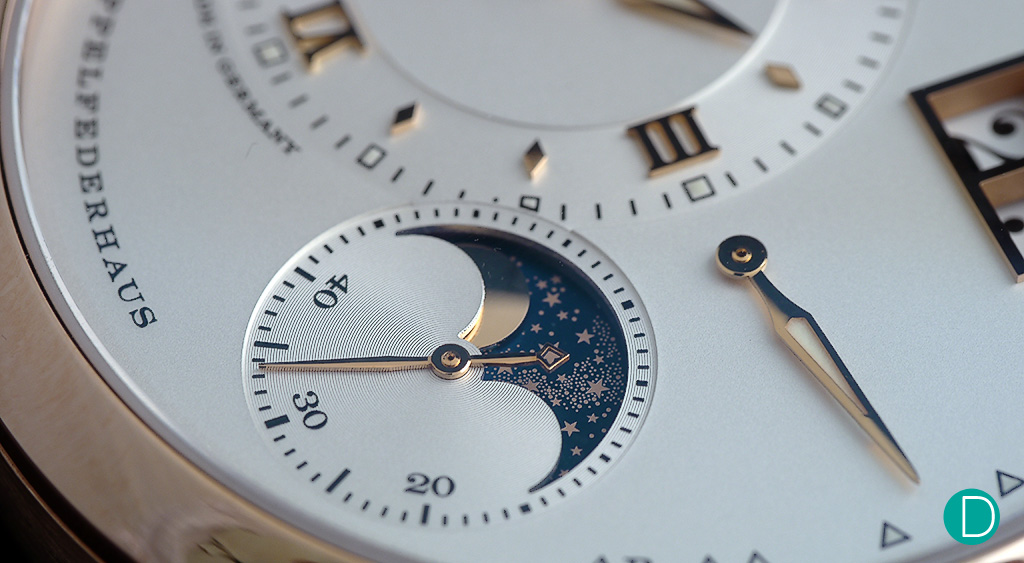 There were 2 occasions where I would have been able to get the watch. The first being to buy it from overseas, and save plenty with tourist tax refunds. I was in Germany, exchange rates were favourable, but I did not prepare myself to make such a big purchase on that trip. The stars were simply not aligned for me to get a brand-new piece from a boutique. From that experience, I learnt that I should always be ready for acquiring my Grail Watch. After I got back home, I checked my credit card limits, my cash withdrawal limits, and maintained sufficient liquidity. I’ll never know when a great deal pops up and I never want to be caught unprepared again.

Fast forward to March 2020. Finally, I saw a pre-owned piece on Chrono24, from a private seller. The seller says that he (or she, who knows) travels between Hong Kong and Australia. Both locations were very accessible from Singapore. This was a watch important enough for me to take a plane ride to view and most likely deal. But as we all know, COVID-19 made international travel practically life-threatening. The seller didn’t respond to my messages, and the post was subsequently removed. My guess is that he found a local buyer, or decided to keep the watch to admire while under lock down, wherever he was. I was genuinely disappointed as it was the only time I found that reference as a “proper” pre-owned. When my Lange 1 was in the regular ALS catalog, the press material was distributed via 35mm slide film, instead of digitally these days.

Of course, if I had the financial means, I could just walk into a boutique and pay full retail price for it. Unfortunately, while I’ve been saving up and trying to maintain sufficient liquidity, the retail prices have been increasing more than my savings. I guess that’s how it shall be for my Grail Watch hunt. Since the 2 lost opportunities, I simply lurked around pre-owned shops and Chrono24 and hoped for another opportunity. Every now and then, I would pop into a retail store to try on the watch. The sales assistants would always be slightly impressed (maybe just surprised) that I already knew so much about the watch. I knew the reference numbers for the different colours, the functions, the specs and the case size.

One day, while scrolling and tapping through Instagram, one of my frequented pre-own shop posted a Lange 1. It wasn’t 192.032 but looked great nonetheless. I did a little research and found that the reference number was 101.022. I decided to visit him that very weekend, also to check out other pieces that he had but didn’t post onto Instagram. When I got there, I didn’t really “check out other pieces” like I said I would. I immediately asked for that piece which was posted. I put on the 101.022, and was really impressed. It was different from the Lange 1 available in recent years. I thought I wouldn’t like it since it lacked the Day Night disc that characterized my Grail. It was also stripped of elaborate applied markers and detailed lume-filled hands. It was simple. It was the bare essentials of a Lange 1. Turned out that I liked it much more than how I imagined it. Three days passed and it was still on my mind. I went through my watch-buying algorithm. The first question to ask was always “Do you like it?”. A resounding “yes”. The second question to ask was “Can you comfortably afford it?”. It didn’t come cheap. In fact, it cost about the same as a pre-owned Lange 1 Moon Phase. I had to mull over it. Should I overwrite my Grail Watch with this one? Or should I trade-up when the actual Grail appears? Could I get this, and also the Grail when it appears? Or simply forget this since it’s a downgrade from the Grail? Choices, choices.

It was a difficult decision to make but I did not want to cause myself any regrets. I could almost feel the regret the more I pondered. I dropped the shop a message to put it aside for me, and then I went down at my first available time. 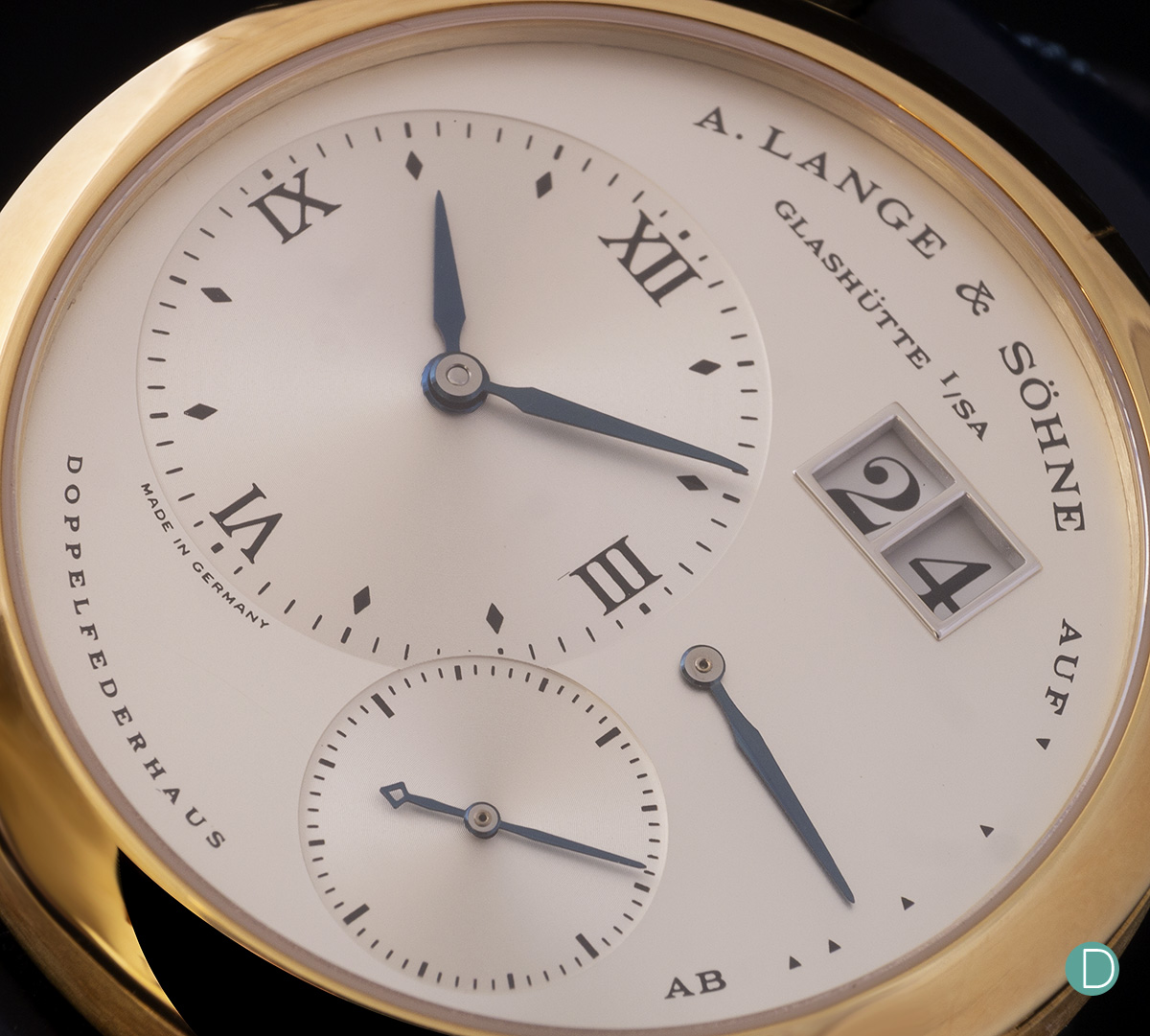 When I went to the shop, I saw the watch for the second time and I got my answer. In the end, only the first question in my algorithm really mattered. 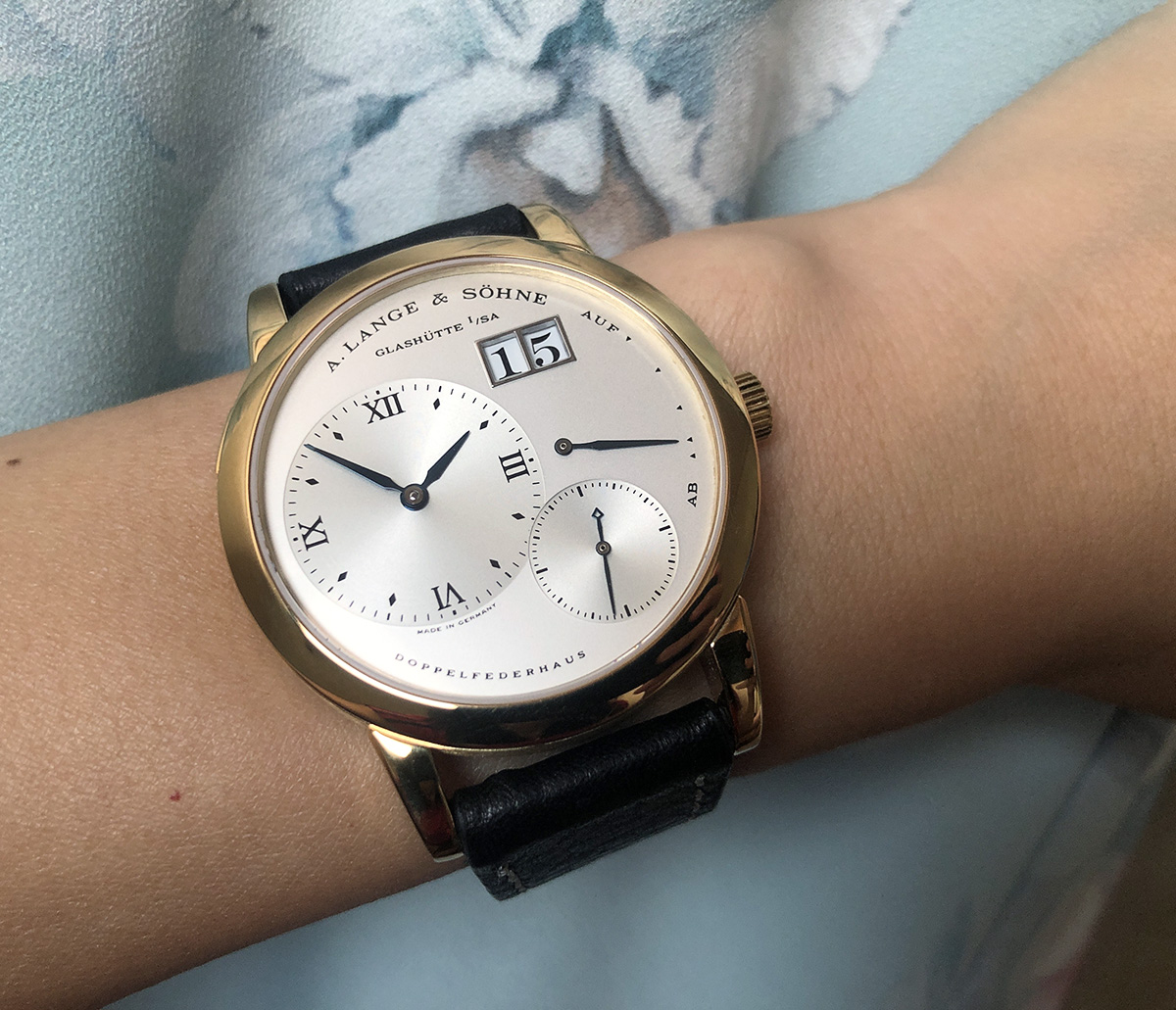 Really loving how all the elements elegantly fit together.

I absolutely adored it. I preferred the blued steel hands over the gold or lume-filled ones. I preferred the printed indices which kept the dial flatter and more contrasting, over the raised applied markers. After years of snooping around for 192.032, it took just all of 20mins to change my mind when the right one came along. A fuss-free photo while doing a power reserve test. It ran for nearly 98 hours! But the rate increased quite dramatically during the last 24 hours.

Now that I have my Lange 1 occupying a prime slot in my watch box, I feel content and the collection feels complete. Looking back at my hunt for what was my Grail, things didn’t pan out the way I planned, but it ended happily for me.