BaselWorld has come and gone. For me, this Basel was less exciting than when I first came to the shows some 18 years ago. Perhaps I have changed and become jaded. Perhaps the industry has changed. Nevertheless, these are my selection of Editor’s Pick of Top 5 watches from this BaselWorld 2015.

Reflecting on the past week, I am asked this question: What was the mood on the ground at the Messe? Generally, it is an atmosphere of cautious optimism. For me, I noted that that though media interest was an all time high, increasing some 7.5% over 2014, the number of buyers have dropped some 3%. This is an indication that for most in the industry, 2015 will be a tough year. The mood was sombre, perhaps eluding to an industry that has recognised that there are systemic problems within its bowels.

Each of my colleagues in the Editorial team will select their own Top 5. Each based it on his view on what was either horologically interesting, or beautiful. Each selection was to have been a watch that he may consider to buy with his own money. There will be some overlaps in our selection. And therein perhaps lie the interesting watches within those intersections. To kick off, here are mine, in no particular order: The HYT H3, the latest in the hydro specialists of new watches, and the first in a non-round case. Perhaps one of the most complicated watches ever made, with a clever mix of hydraulics, of linear retrograde indicators and turning columns of cubes.

Though the watch is slightly large, measuring some 62mm length, and 41mm width, it remains reasonably comfortable to wear, as it to sits well on the wrist with the long side along the arm. And within, the raison d’être behind it being selected as one of my top 5 watches from BaselWorld 2015: the story of the highly complicated movement. The full explanation on how the movement works is rather interesting, but will have to wait till we get our hands on for one for a full review. We covered the watch with the press release issued by HYT here.

I have selected this piece as significant not only for the mix of hydraulic technology and traditional mechanical movement, but also because of the H3’s innovative way to tell the time. The hydraulic fluid is a complication in its own way being made of a aqueous liquid carrying a dye and an oil based liquid: two immiscible liquids, in a capillary which has to retain a surface tension to prevent either liquid or the dye to stick to its walls. This problem has been solved successfully by HYT in their H1, and H2 watches.

In the H3, they collaborated once again with Audemars Piguet Renaud and Papi to produce yet another spectacle. The liquid is used not only to indicate the linear passage of the hours, but also to power the mechanism which turn the column of cubes which rotate once every 6 hours so that the cubes can indicate the passage of the 24 hours with 4 rotations. Another complicated retrograde mechanism is used for the minutes display.

Cased in a magnificent platinum and titanium case, the timepiece is limited to 25 pieces, and a highly desirable one indeed.

Patek Philippe was the talk of the show this year…as it tends to be in many of the years, being the Grande Dame and Doyen of the industry. But this year, most of the chatter in the halls of BaselWorld 2015 was on the un-Patek-ness of the Ref.5524. We covered the press release of the iconic, and fresh face of Patek here. For me, the Calatrava Pilot Travel Time is a beautiful watch, but that is not the subject of my Top 5 watches for BaselWorld 2015. The subject is a more traditional Patek offering. The Ref. 5370 split seconds chronograph. The watch is magnificent as Patek Philippe rattrapante chronograph have been in the past. The 5950, in its cushion shaped case was a leader in its day, with the magnificently made Cal.CHR 27-525 PS. This new watch, Ref 5370 now carries the new CHR 29-535 PS. The movement is beautifully finished, as with all top drawer Patek Philippes, but also very innovative in the construction. The use of an isolator to decouple the split seconds wheel from the chronograph wheel is innovative and eliminates the friction holding the split seconds hands stationary. This friction takes its toll in decreased amplitude of the balance wheel, and is avoided completely with this isolator mechanism. The dial is a very beautiful, very deep, rich black made possible by using enamel grand feu. It is also interesting to note that Patek Philippe’s main rivals at the ultra high end of watchmaking,  Lange & Söhne also announced a black grand feu enamel in SIHH 2015 in the form of the Lange 1 Tourbillon Handwerkskunst.

Traditionally applique numerals are not possible on grand feu dials, as it was deemed impossible to drill the enamel dial to affix the feet of the appliques. But this was a challenge taken by Cadrans Stern Frères: the company who makes the dial for Patek Philippe, and whose owners acquired Patek Philippe in 1932. And looking at the result, magnificent indeed. I also note that the said Lange 1 Tourbillon Handwerkskunst also feature applique numerals on its dial, also manufactured in-house. Possibly the only two grand feu enamel dials to have appliques.

Cased in a platinum Patek styled round case measuring 41mm in diameter with a height of 13.56mm, the watch is nicely sized and wears well on most wrists.

Last year’s BaselWorld, I was invited by Oliver Muller, CEO of Leroy to visit. I was a bit underwhelmed by their offerings in 2014. When I visited again in 2015, I was amazed. Gone are the dull, uninteresting case and dial designs. Gone are the unspectacular movements.

L.Leroy itself is a very old company. Founded by Basile Le Roy in 1785, around the time A.L. Breguet was setting up his own watchmaking enterprises in Paris. And like many laid in ruins during the quartz revolution. The giant Festina group bought the name rights to Leroy, and began work to revive the brand in 2012 and to recapture the legacy.

The new Festina funded company worked in collaboration with master designer Eric Giroud for the development of the new case, dial and overall aesthetics. In my view, the new Leroy offerings are much improved. In particular the Chronometer with tourbillon escapement captured my mind’s eye, and gets my nomination in my Top 5 watches from BaselWorld 2015. The case, beautifully designed to be classical in form, carries a grand feu enamel dial, with a magnificent medallion in the center with a motif which is taken from one of the old Leroy clocks. We are looking forward to spending more time with this watch to do a detailed review soon, and will report our in depth findings. For now, the case, dial, hands are beautifully designed and executed. And the movement is magnificently complicated, well designed, and full of innovative features like the direct impulse escapement on the tourbillon, the fusée-and-chain system to ensure constant force.

It is no secret that at Deployant, we are big fans of Cabestan and the seminal works of Eric Coudray. We described and reviewed their Winch Tourbillon in great detail earlier this year. and have featured their Luna Nera (formerly known as Luna Nera) in our pick for top watches for SIHH 2014.

This year, they made a big impact again. A triple axis tourbillon, designed and executed totally inhouse by Eric Coudray.  We were the first to carry the press release of the Cabestan Triple Axis Tourbillon watch in these pages. They completed the watch on Day 2 of BaselWorld 2015, and presented the watch as is. A full working prototype, fully functional, but yet unfinished, as they had rushed to bring the working piece to the show. The Cabestan Triple Axis Tourbillon on the wrist.

The watch has an unusual shape. The side profile is like that of an aeroplane’s wing, and lightly reminiscent of the Parmigiani Bugatti. But the shape of the case is where the similarity ends. While the Parmigiani has a regular escapement, sans tourbillon, the Cabestan is a triple axis. And one that has probably the fastest spin rate of any true triple axis tourbillons in existance. The visual spectacle of the large tourbillon complex, turning on itself on three axis, executing each revolution very quickly is mesmerising. One can sit and stare at the mechanism for minutes, perhaps hours and yet gain a calm perspective. 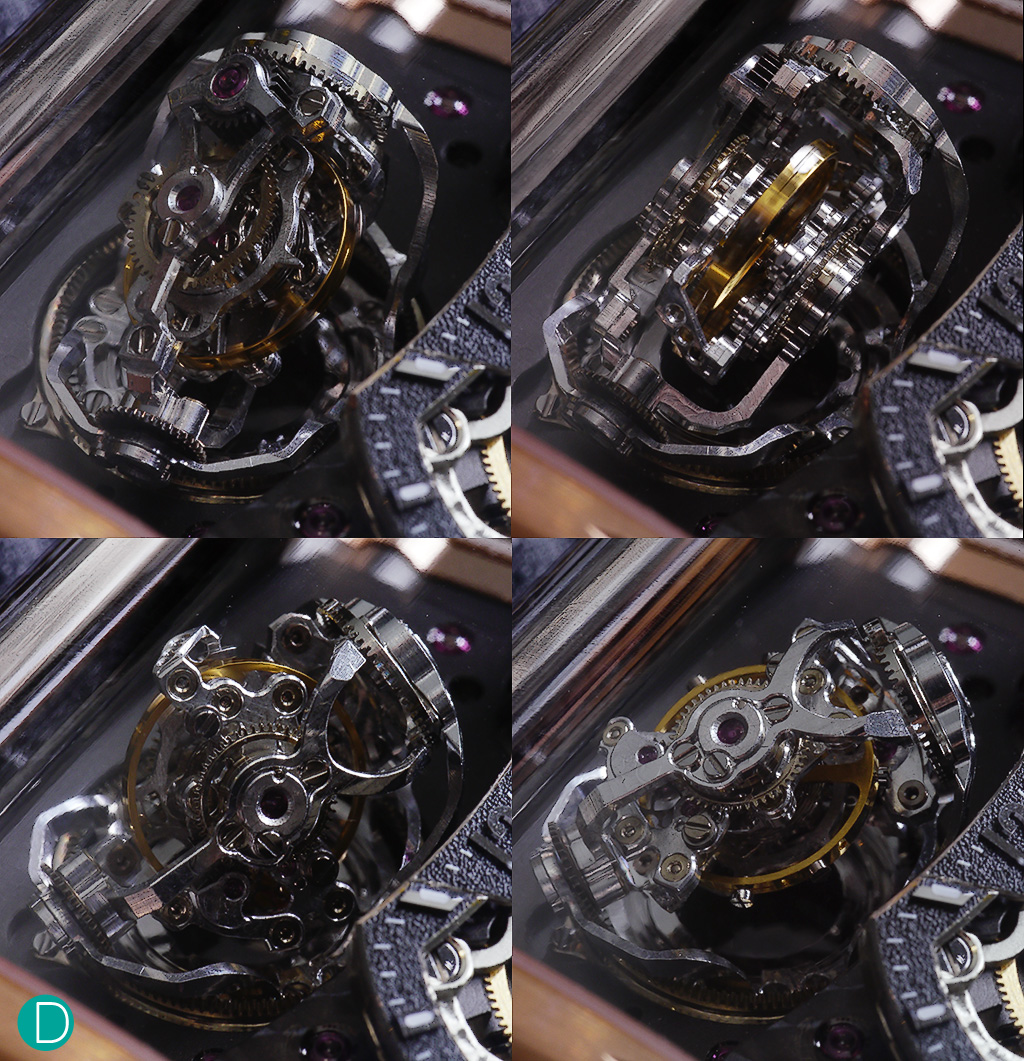 The triple axis tourbillon going about its business. The first each axis in 17 seconds, the seconds in 19 seconds, and the third in 60 seconds respectively

While this is not the first triple axis tourbillon ever made, we believe this is preceeded by Thomas Prescher some 10 years ago with his Triple Axis Tourbillon which was additionally equipped with a constant force escapement on the first axis. And more recently by the Vianney Halter Deep Space which is also a triple axis tourbillon. Both the Prescher and the Halter spins much more slowly. On the Prescher, each axis makes one revolution in one minute. And in the Deep Space, makes its round in fourty seconds, six minutes and thirty minutes. Last year the Girard Perregaux and Harry Winston (manufactured by Complitime/Greubel Forsey) released their versions. The GP Triaxial spins at one minute, thirty seconds and two minutes. The Cabestan spins at a record breaking 17 seconds, the seconds in 19 seconds, and the third in 60 seconds.

Deployant will have more in-depth time with this spectacular watch, and will report on a detailed review soon.

Not all watches which attracted my attention this year are megabuck offerings. I have been watching Tudor for a while now. Since about 2012, they have come around from being a shadow of big brother Rolex, and have started taking great strides on their own. Not only in design, due to their remarkable designer, but also in communication and in setting standards on the entry level luxury watch range.

This BaselWorld 2015, the Tudor Pelagos makes it to my Top 5. The same handsome, tool and dive inspired watch case, now also available in a magnificent blue bezel as shown, comes equipped with a manufacture Tudor MT5612 movement. A more sober black bezel model is also available.

The case is interesting. Made in titanium to be strong and light, it is equipped with an helium escape valve, and availalbe with a rubber/silicon strap or a bracelet.

The movement is also quite interesting. It utilizes a silicium balance spring with micro adjustable inertia balance and sports a power reserve of 70 hours, and beating at 28,800 bph. Looks suspiciously like a pared down Rolex 3255 introduced this year as well. Big brother is equipped with the new Rolex Chronogy escapement and the Tudor uses a rather more conventional Swiss lever escapement. The Tudor Pelagos. Beautiful dive style watch which looks equally at home in a suit as it does with diving gear. Now with the new inhouse manufactured Tudor movement.

The Pelagos remains an affordable CHF4200, a mere 10% more than ETA equipped namesake it replaces. And for me, that’s a remarkable value! And I suspect will find a place in many an editor’s Top Watches for BaselWorld 2015 and on many enthusiasts wrists.

These are my top 5 picks. Totally personal, and as mentioned what I would buy if I were to spend my own money on watches. What would you leave out? What would you include? What would be the picks of the other members of the editorial team? Lets see in the upcoming episodes.