It is a commonly held belief that Gerald Genta’s Royal Oak watch launched in 1972, saved Audemars Piguet from collapse during the quartz crisis. However, the truth was the Royal Oak was almost universally panned when unveiled at the Baselworld Fair and there was another which played a crucial role – the Audemars Piguet calendar. Often forgotten, the Audemars Piguet perpetual calendar calibre 2120/2800 turned out to be a revolutionary movement not just for Audemars Piguet but for the Swiss watch industry. Thus, it can be opined that the recently launched 2017 black ceramic Royal Oak Perpetual Calendar is the most potent example of the legacy of Audemars Piguet Calendar watches, but we shall return to that later.

Launched in 1978 during the height of the quartz crisis, just after the birth of Genta’s Royal Oak,the Audemars Piguet perpetual calendar calibre 2120/2800 was an extremely thin movement which demonstrated the future for traditional complicated watchmaking much in the same way Biver, over at Blancpain was showing that complications like the moonphase were of such artistic natures that Quartz would never be able to replace the soul of a mechanical watch. 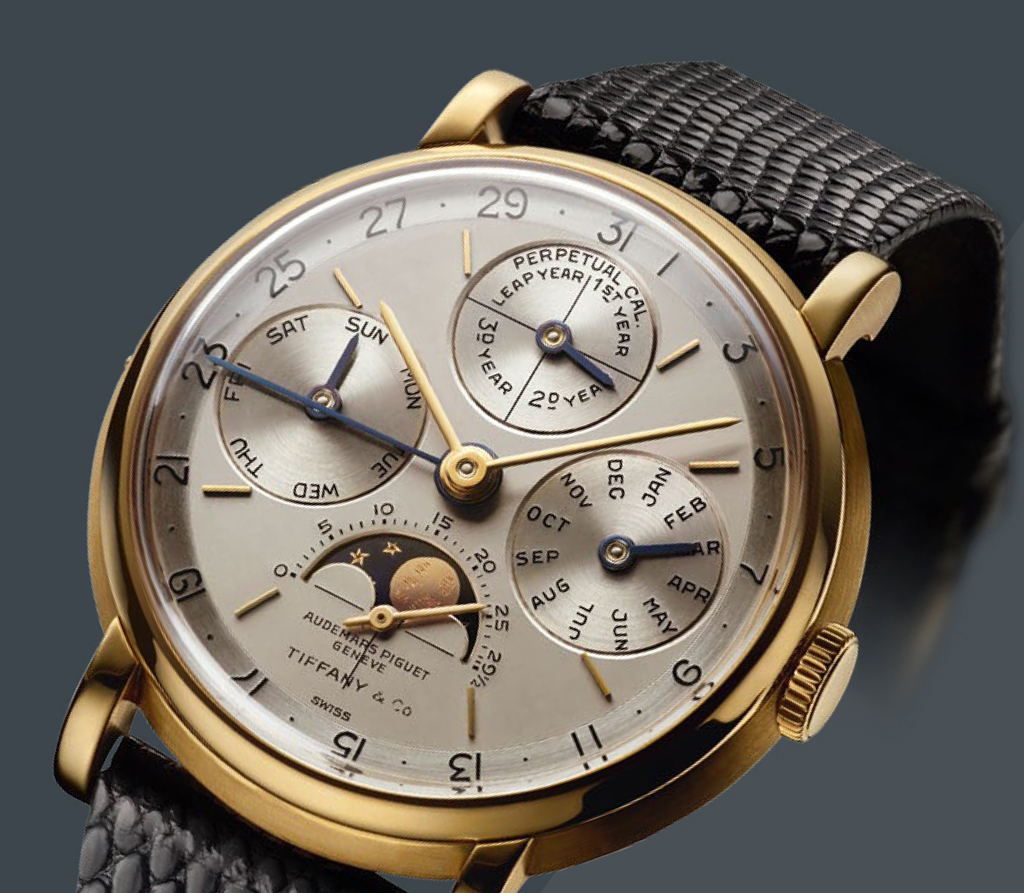 What better way to encapsulate provenance and legacy by using the dial layout of a perpetual calendar birthed over 50 years ago?

Among the three, veteran watchmaker Michel “le Mic” Rochat ( he eventually worked at Audemars Piguet for 34 years) initiated the project in the greatest secrecy, beginning first with mock-ups in cardboard in collusion with Jean- Daniel Golay, founder of the technical department. Wilfred Berney, founder of the after-sales service department then advised on the creation of the calendar module which would then use the exemplary base 2120 calibre introduced in 1967. When the first Royal Oak models were launched in 1972, these Gen A Oaks used the calibre 2120 movement. Once again, pointing to the curious legacy of Audemars Piguet Calendars which would lead to such a potent symbol of brand provenance.

In 1977, constructed using blueprints provided on the trio’s information to the Vallée de Joux horological school, the men finally presented the prototypes to Georges Golay, the Chief Executive of Audemars Piguet and a man who had been leading the company for the last 15 years. Golay was blown away.

The ultra-thin underdial work of the perpetual calendar combined with the world’s thinnest selfwinding movement achieved a total height of just 3.95 mm and in the 70s, it was just not the kind of watch you were used to seeing. Wristwatches with date apertures at 3 o’clock were commonplace but perpetual calendar wristwatches were extremely rare with only Audemars Piguet and Patek Philippe still producing them in series production. The risk cannot be understated but faced with such an exquisite perpetual calendar, Georges Golay ignored high risk and commissioned a run of 159 perpetual calendars.

The number might seem small, but 159 perpetual calendars was almost as many calendar wristwatches made since 1924, during a time when Quartz was touted to kill the industry entirely and demand for such a complicated timepiece was all but certain. As it stands, the watch would turn out to be a smash hit, the legacy of Audemars Piguet calendars was certain. LeCoultre movement blank with Dubois Depraz module, conceptualised by 3 Audemars Piguet watchmakers. Calendar components: 12 month star-wheel with two cams and a Maltese cross for the leap year function. Pushpieces to set the days, dates and moonphases of lacquer and sapphire-crystal.

A look at the company’s archives would show that the immediate success forced rapid acceleration of production with a total of 7,219 perpetual calendar watches put into production over 15 years. How did it save Audemars Piguet? Let’s just say that 15 years after the perpetual calendar 5548 model was launched, the Audemars Piguet workforce almost doubled, reaching 285 employees.

70 different models were made, the first reference being the Ref. 5548 produced in 2187 pieces (in differing variants) – almost 200 versions were documented with most models produced in series of less than 100 watches. White gold was the least popular material with hardly 200 watches in that colour, while three-quarters of the total production were in yellow gold. Platinum overtook pink gold, steel and bicolour versions with nearly 600 watches. While all the movements were decorated by hand to the highest standards, 272 of them were completely openworked as skeletonised movements. This achievement showed the way forward for the rest of the Swiss watch industry that had lost nearly two-thirds of its workforce between 1974 and 1984. It also gave a boost to the craftsmen and women at Audemars Piguet who continued in their role as the pioneers of the resurgence of complicated wristwatches. The history and legacy of Audemars Piguet perpetual calendars

The Dawn of the Royal Oak Perpetual Calendar

An enterprising young artist named Jacqueline Dimier joined Audemars Piguet in 1975. Her creative talents at Audemars Piguet were felt almost immediately, when she designed the first ladies’ Royal Oak in 1976. By 1977, she by introducing stepped bezels to wristwatches, she not only was ahead of the industry design curve (encouraging other companies to follow suit), she also provided distinctive aesthetics for the reference 5548. Also, at 37.22 wide and 7.8 mm thick, the watch was oversized for the period, a foreshadowing of the 93’s Royal Oak Offshore perhaps?

The 5548 model is the first watch fitted with the calibre 2120/2800 and the watch made in the greatest numbers (2,187). This version of the calibre had the longest production run of 13 years. In the record-breaking year of 1984, production of reference 5548 reached a peak of 675 watches out of the 1,066 perpetual calendars made during the same year. Today, the legacy of Audemars Piguet Calendars lives on in the full black version, made of hand-finished black ceramic. The SIHH 2017 Audemars Piguet Perpetual Calendar is virtually unscratchable and due to the fact that black ceramic withstands high temperatures and thermal shocks, and is consequently extremely resistant to ageing, it’s one of the hardest watches to tool and finish. Numerous operations demanding extreme patience (and 5x more time – 30 hours to a standard steel Oak’s 6 hours to machine, polish, hand-finish, assemble) are required to achieve a uniform, compact and ultra-hard material that can then be machined and hand-finished.

Taking over 600 hours of research and now home to the design cues and legacy of the Le Brassus manufacture, the black ceramic Royal Oak perpetual calendar with slate grey “Grande Tapisserie” dial and black counters is the modern flagship of Audemars Piguet’s best traditions and history. Day, date, month, astronomical moon, week of the year displayed on the dial’s outer chapter ring and the essential leap year indication hold pride of place on the “Grande Tapisserie” decorated dial. Who knows what the next 50 years will bring…