We caught up with Breitling’s new CEO Georges Kern in Shanghai and Singapore recently and chatted about the newly released Navitimer 8 and his plans for the brand, Here is the no-holds-barred details of our conversation, quickfire style.

Travelling at the speed of light

Since taking the helm barely 5 months ago, Georges Kern has been a busy man. He has almost completely revamped the entire company and brand. Starting with the logo, now adopting just a stylised B, first used in the late 1940s, the wings and the anchor of the logo version just prior have been clipped. The intent is the show that Breitling is not only about aviation or the oceans, but as a brand offering watches within the CHF3000 to CHF9000 price range, focussing on tool chronographs and for the trades within aviation, seafaring and land based activities.

He swiftly changed the mangement team, bringing in expertise from Richemont, Audemars Piguet, Hodinkee Watchville. The team worked hard together and within the timeframe introduced a new sub-line within the very popular Navitimer series – going back to the history books and re-introduced the Huit (French for 8) with the new Navitimer 8. 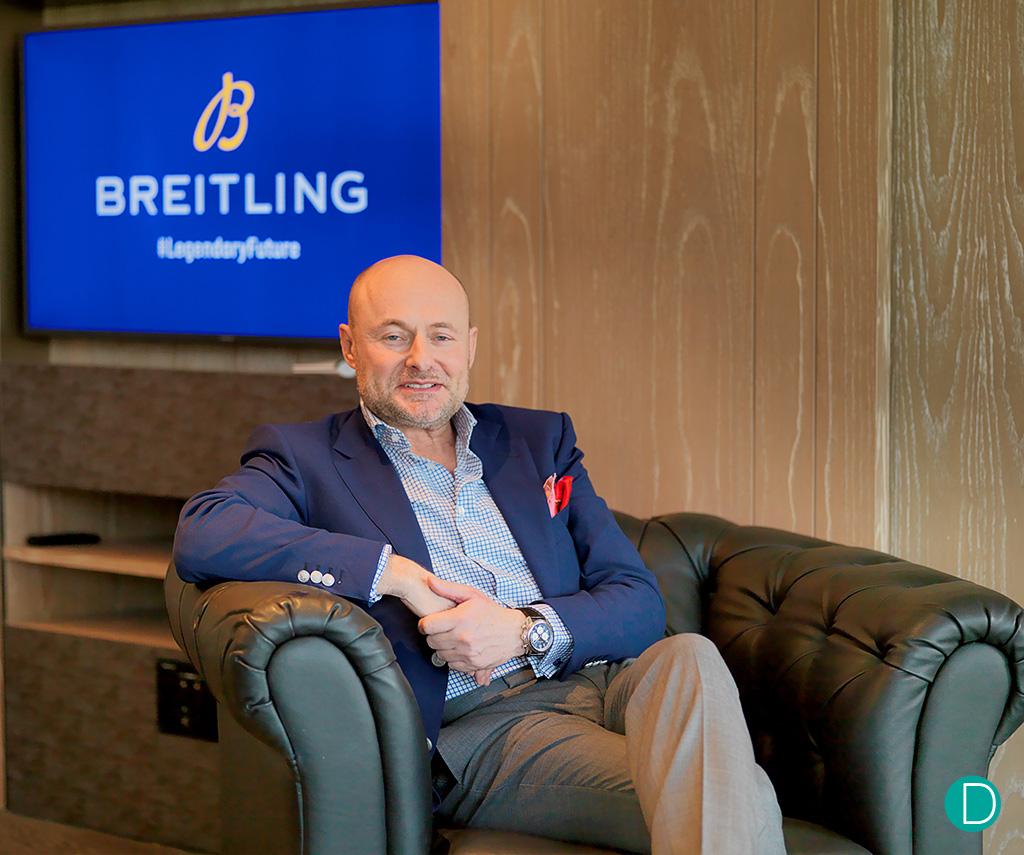 The famous Breitling aquarium will be cut from the 2018 edition of the Breitling Booth at Baselworld. Photo credit: https://www.montredo.com/uhren-magazin/die-stande-auf-der-baselworld/ HB-IRJ, the call sign and tail registration o the Breitling owned DC-3 aircraft which will attempt to circumnavigate the world this year, and when successful, will be the oldest aircraft ever to do so. The DC-3 completed its journey in 2017, and will be cut from the budget from 2018.

The “Secret” history of Breitling Revamping of the collection

Georges revealed that when he took over as CEO, Breitling was already producing some 150,000 watches a year, and is the fourth largest watch brand bu turnover in the USA, Europe and Japan. The next couple of years, he will be focusing efforts to open the green field (to Breitling) China market, while keeping the positions in the other markets, aiming to displace Longines as the no 4 brand in the market globally (after Rolex, Omega and Cartier).

We attended the Global Roadshow which unveiled the Navitimer 8 in Shanghai, where he also revealed the new product strategy and lineup. Here is a peek at the launch event in Shanghai on January 29, 2018.

The complex model lines within the Breitling collection will be streamlined to the following:

Aviation: Navitimer. Both the new Navitimer 8 and the existing Navitimer 1 will co-exist to cater to different segments of the market.

New Dress line: Premier (to be introduced third quarter 2018. This is the re-introduction of the Premier line which began life with Breitling circa 1943.

Lines will be clear in the movements offered. The Tudor B20 movements will be offered in watches about 42mm diameter. ETA/Sellita based movements will power the time only and day/date editions and will range from 39mm to 42mm. With the range topping in-house B01 chronograph at the apex.

The new line known as the Navitimer 8 is a throwback to 1938, where Willy Breitling founded Huit Aviation to cater to the instrumentation needs of the then growing military and civil aviation sectors.This was a new specialist department which developed, manufactured, and tested instruments and watches for use in demanding conditions. The catch phrase used was  “under, amongst, and above the clouds”. Apt then as it is now. Technical challenges which include extreme conditions of changing temperatures, vibrations, acceleration and decelerations, shocks, changes in positions, effects of magnetic flelds were common and had to be addressed.

The new Navitimer 8 is a line which is smaller in diameter (43mm), sleeker in the dial without the non-essential items (like the slide rule). The traditional Navitimer 1(46mm as well as in 43mm) with the complex looking dial with the circular slide rule, and large case will continue to co-exist. Some purists will cry foul over the deletion of the slide rule, but it mist be noted that the early Navitimers did not always carry a slide rule. The new Bretling Navitimer 8 B01 with the inhouse B01 caliber. Shown here in stainless steel with a steel bracelet.

The flagship of the new line is the Navitimer 8 B01 with the inhouse Breitling B01 movement (also supplied to Tudor for its Black Bay Chronograph). This flagship (CHF7.5k for steel) will be identified by the contrasting “panda” dial. A tone on tone dial chronograph (approx CHF 5.5k in steel) will be equipped with a Valjoux movement. Time only versions will be offered in automatic ETA/Sellita movement, a day and date version and a Unitime ranging in prices about CHF 4k for the B20 (Tudor movement) and CHF  3.6k for the ETA/Selita. We will be doing hands-on review of all the models over the course of the next months. On Georges’ wrist is the new Breitling Navitimer 8 B01 in a croc strap.

So what’s happening at Breitling? Lots. And all exciting, Suddenly, a successful company, famous within the aviation industry for making large, complicated watches, with a dubious communications strategy, with a curious bad boy attitude (party, girls and flying) has become more mature. More complete. Georges Kern and his new team make sure that Breitling remains fresh, and ready to attack in its chosen niche – excellent tool watches within the selected sweetspot of CHF3k-9k.

Georges also revealed, with a twinkle in his eye, that Breitling will dig deep into its historical roots, and will be doing period correct re-editions – size, dial layouts, manual winding movements. This will keep classical Breitling collectors super hyped up, while the new collection like the Navitimer 8 is intended to attract new clients. The traditional collection, like the Navitimer 1 will keep existing Breitling fans happy.

We think the new Breitling is fresh, bold, and exciting. And looking forward to the increased energy that Georges is bringing to the brand. Viva Breitling!