When the Zeitwerk was first introduced in 2009, you could probably imagine the bewilderment that ensued. A. Lange & Söhne, the patron saint of traditional German watchmaking was unveiling a timepiece that would arguably make more sense coming from the likes of Urwerk or Cabestan. But because it is Lange we’re talking about here, that bewilderment soon turned to adulation from experts and collectors alike. Much like the Lange 1, the Zeitwerk quickly became an icon (and somewhat of a legend) in high horology. And here’s why: the Zeitwerk is absolutely faithful to the Lange ethos; it may not look like a Lange, but it is absolutely a Lange. Allow me to share with you a story of how I came to be with the Zeitwerk’s musical brother, the Zeitwerk Striking Time. The Lange Zeitwerk Striking Time in whote gold, black dial The dial can appear to be blue under certain lighting conditions, due to the anti-reflection coating on the sapphire glass. Photo: Deployant file photograph from SIHH 2011.

As a watch enthusiast, my interest has always been in high horology. Nothing excites me more than timepieces crafted with the utmost level of care, panache and ingenuity, complicated or not. And yet while my appreciation for haute horlogerie is generally non-selective, one manufacturer at the absolute pinnacle of watchmaking has successfully tugged on my horological heartstrings: A. Lange & Söhne. What got me emotionally invested in the brand was not simply the traditional aesthetics of the watches but also the history, achievements and spirit of this plucky young manufacturer from Glashütte, Germany. Prior to the Zeitwerk Striking Time, the yellow gold Grand Lange 1 Moon Phase (GL1MP) – a watch which I absolutely love even today – was my undisputed weapon of choice. I loved the fact that the GL1MP was so unmissably Lange, steeped in tradition and very classic and conservative in its design.

Judging from what I loved about the GL1MP (a textbook German fine watch), it may not come as a surprise then that my encounter with the Zeitwerk Striking Time was not – as the cliché goes – “love at first sight”. As you probably know, the Zeitwerk family of watches is not like the rest. If anything, it is quite the oddball, for lack of a better word. Glaringly absent are the comforting lancet hour/minute hands, the railroad minute track or the outsize date window. I will go straight to the point now – the watch tells time digitally… digitally! This is what makes the Zeitwerk so disruptive. The Zeitwerk grabbed my attention for sure but I was not sure what to think of it. As I mentioned earlier, on first glance it looks like an ultra-contemporary piece you might find from a modern independent watchmaker. The strictly traditional design and aesthetics of Lange’s other offerings were what drew me to the brand in the beginning and so for a while, my stance on the Zeitwerk was left in limbo.

Slowly but surely however, I soon found the Zeitwerk creeping into my heart, like the proverbial boy/girl escaping the “friendzone” in cheesy teen romance novels. I slowly began to see a side of the Zeitwerk, in particular the Zeitwerk Striking Time, which was clouded before. I realised that while the method by which the Zeitwerk Striking Time displayed time was unconventional, the timepiece itself was in actual fact grounded in tradition and the perfect embodiment of the manufacturer’s ethos.

What do I mean by “grounded in tradition”? Well for one, the Zeitwerk Striking Time is constructed using traditional techniques and traditional materials (think hand polishing, hand engraving, German silver bridges and steel hammers). For another, apart from the so-called “time bridge” where the digits and seconds sub-dial dwell, literally the entire watch looks like a typical Lange. The case of the Zeitwerk Striking Time is traditional, austere and remains faithful to the brand’s other pieces. The case back of the author’s Zeitwerk Striking time, showing the magnificent movement.
Photo by Frank Chuo.

The movement, while extraordinarily picturesque, is similar in construction to other high-complication Lange movements (utilising bridges instead of the full three-quarter plate). Even the striking mechanism, seconds sub-dial, power reserve indicator and oversized numerals discs conform to Lange tradition. It was for these reasons that I convinced myself that the Zeitwerk Striking Time had not actually departed from tradition – far from it – but had instead used the full richness of traditional German watchmaking as a foundation to go beyond the conventional.

And what do I mean by “the perfect embodiment of the manufacturer’s ethos”?

In my humble opinion, A. Lange & Söhne’s rise to the highest echelon of fine watchmaking, in a mere span of 22 years from when the Saxonian manufacturer first unveiled its debut pieces, is nothing short of a miracle. In fact, calling it all a miracle is perhaps a little insulting as I am sure that such an achievement only comes from collective hard work, innovation, genius and perfectionism. The same can be said about the Zeitwerk Striking Time; this was a timepiece culminated from almost two decades of mechanical know-how and unceasing devotion to uncompromised quality. And the proof is in the pudding; just take a close look at the dial and case back of the mechanical masterpiece that is the Zeitwerk Striking Time and you will understand that there is nothing in the world of horology quite like it.

I chose the Striking Time variant of the Zeitwerk because not only does it express time with jumping numerals, it does so with sound too – and such complexity always makes the watch geek in me giddy with glee! I also appreciate that Lange decided to put the hammers and gongs dial-side as it is always a pleasure to watch the complication at work on my wrist. The Zeitwerk Striking Time chimes every quarter hour and hour; the sound clarity and purity are top notch, almost therapeutic.

If you have ever looked at your watch twice in a row and still not know the time, then you are like me. It is the case for me and my GL1MP – I would always end up staring at the moon phase indicator instead of telling the time. With the Zeitwerk Striking Time, there is no such problem. Handsome the dial may be, but there is no way that you will miss the time with the oversized numerals staring back at you when you pull up your sleeve. I can say with full confidence that this is one of the most legible timepieces out there when it comes to telling time. 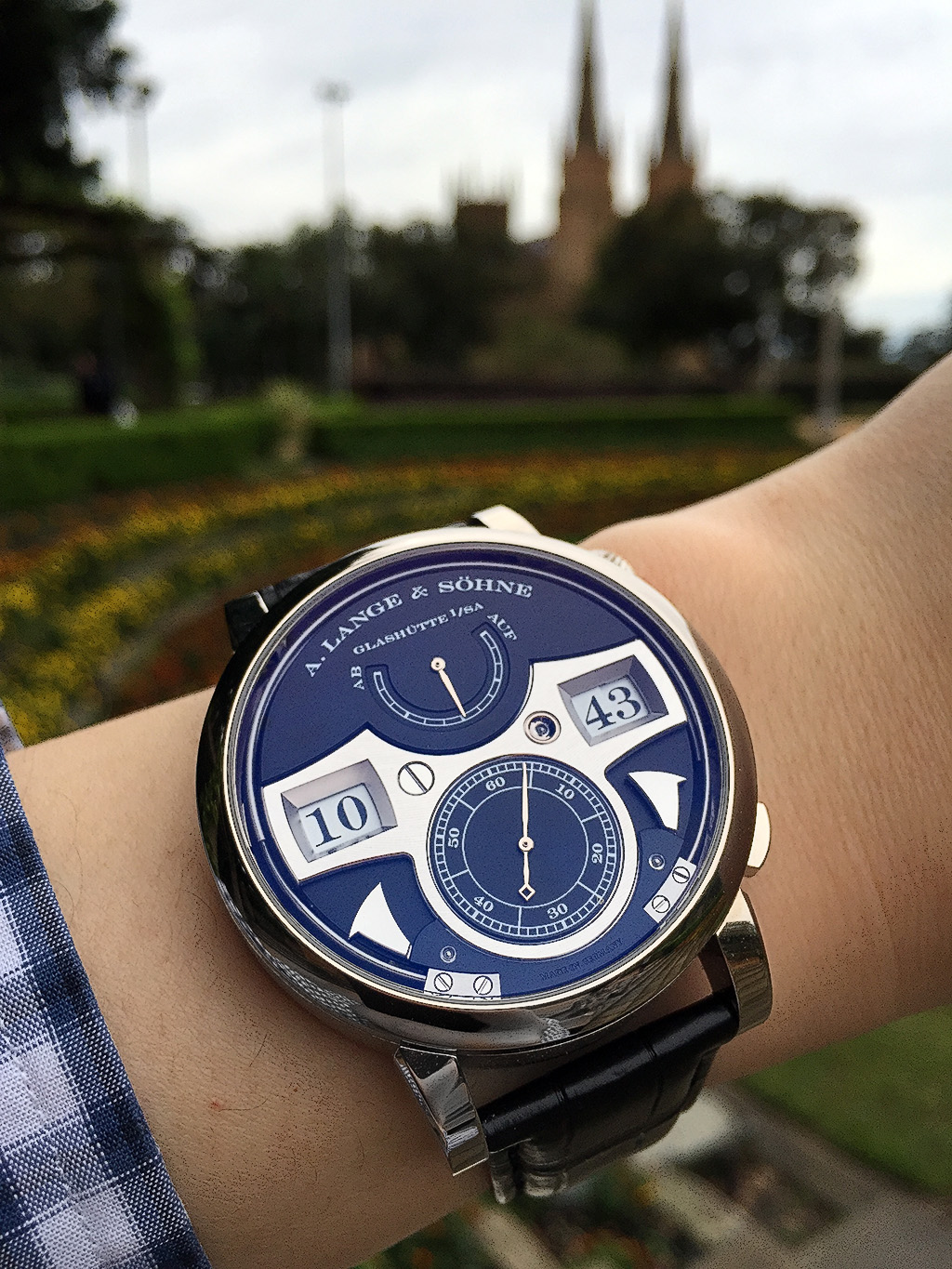 The Lange Zeitwerk Striking time on the author’s wrist.
Photo by Frank Chuo.

Turn the watch to its back and you will be treated to a 7-star banquet for your eyes. I will not go through the movement in great detail in this article, for many others have covered it extensively, but what I will say is that it is nothing short of breathtaking. This is one of those pieces where you would want to have a proper loupe to practise a little voyeurism. Not a single surface or component is left unfinished. We’re talking about Glashütte ribbing on the bridges, heat-blued screws, polished screw heads and swan neck regulator, snailing on the wheels and of course hand-engraving on the balance cock – everything is immaculately finished. The Zeitwerk Striking Time’s movement, described by the author as a 7 star banquet for the eyes.
Photo by Frank Chuo.

My favourite part of the movement looking through the sapphire crystal case back is the very extra-terrestrial-looking anchor bridge which holds the constant force mechanism that separates the Zeitwerk from the ordinary. If you think about it carefully, not only does this mechanism have to accumulate, store and release the appropriate amount of energy every minute, tens of minutes and hour (when all 3 discs have to jump simultaneously and instantaneously) to move the numerals discs, it has to coordinate all that with the chiming mechanism for the quarter and hour strikes.

At the end of the day, the Zeitwerk Striking Time is best described as a masterclass in energy management. It matters not that it only has a power reserve of 36 hours, because that just means I get to wind the watch every day and my, what an experience winding the Zeitwerk Striking Time is. It takes a fair amount of effort to wind that extra strong mainspring (which produces more torque than the one found in the Lange 31) but that is a good thing because it is just pure tactile AND aural pleasure.

Admittedly though, the best thing about this timepiece is not what it packs but what it brings out in people. In me, the Zeitwerk Striking Time brings out the constantly-repressed watch geek in full glory. In others, it brings out the words “Oh my God” followed by “Is that a Striking Time?!”. Did I also mention that it makes for a great conversation starter and is awesome for entertaining people? My point is, it brings people together, be it friends, family or strangers and it gets everyone talking excitedly, like little children. This is what I love about watch-collecting – men and women coming together in a united passion for watches.

So do I have a real winner in the Zeitwerk Striking Time? Ding! Absolutely.