Hublot is a polarising brand amongst the watch cognoscenti. Even when speaking to veteran high-end watch collectors like Glenn Chiang, answering a question about the existence of Hublot in their collection conjures deep thought and careful answers. Sometimes, over forum discussions, a number of commentators will offer that while Hublot is recognised as a decent watchmaker, it is not to be considered in the same ranks as Audemars Piguet.

“When it comes to spending a lot of money, many people will rather go for something iconic than for the ‘special alternative’.” – Heitzmann, watch collector

“It’s a slick, heavily marketed brand!” echos another common refrain from the novice collector looking to impress his veteran betters. Perhaps for a time, it might even have been considered true; But if there was any doubt whether Hublot was a serious watchmaker, the question was definitively answered in 2010. And the answer was, “Yes.” Does Hublot make an Iconic Watch?

The initial haterade was drawn towards the unique aesthetics of Hublot’s Classic Fusion Line. In terms of design, Hublot happens to be visually recognisable on the level of some of horology’s most iconic models, namely the Royal Oak and the Nautilus. But therein also lay the problem- screws on the bezel and the vaguely faceted (akin to an octagonal) case below was a magnet for the criticism from many first timers that it was a derivative combination of watchmaking’s most signature designs. But nevertheless, a test of true iconic design lies in a timepiece’s ability to be recognised from 20 paces and by all indicators, Hublot, definitely passes muster.

It’s understatement that the study of horology is just a few centuries shy of a millennium; in that time, the holy trinity of watchmakers have shifted hands from the likes of Omega and Longines to the modern (speaking relatively) trinity of Patek Philippe, Audemars Piguet and Vacheron Constantin.

If the question of whether Hublot is a serious brand is answered in that perspective then it’s worth noting that while the brands mentioned have had their histories date back over 100 years, Hublot hasn’t even scratched 40 years old. Thus, it can be argued that Hublot is the face of ‘modern horology’.

“How do you define traditional values though? Are values better by virtue of simply being older?”. – Jerome Pineau (former Hublot employee)

Hublot is a serious watchmaker

By any standard, Hublot is a serious watchmaker. But if technical competence is the yardstick by which we measure the Maison, then watches like the LaFerrari, Antikythera, Key of Time, Minute repeaters and tourbillons are evidence of the mastery of the traditions which define many watchmakers as “serious”. Worn on a special custom strap, the MP-03 is a bit wieldy, but in this position, at least the tourbillon is effective.

Yes, Hublot just happened to debut at the perfect confluence of demographics and design. For a time, most WIS (Watch Idiot Savants) had held the opinion that Jean Claude Biver was simply at the right place at the right time but now, even serious watch collectors are embracing the perspective that Hublot offered modern connoisseurs what Audemars Piguet, Patek Philippe and Rolex offered during their respective eras – the contemporary luxury sports watch. When it came to those models, none of them had the provenance and recognition of superlative design but they each broke the mould in their own right in a similar fashion, the Big Bang merely followed suit.

For a while, Big Bang used modified ETA 7750 movements and while the watch as a whole was seductively attractive, the average watch snob tended to judge a timepiece merely by what beat within- While the Valjoux chronograph is nothing to be sniffed, argument from the Snobs was, “It’s not in house.” Until it was.

In 2010, Hublot acquired the property and assets of movement maker BNB Concept. Mathias Buttet was given the keys to the kingdom and eventually, the UNICO was birthed with the purpose of replacing the workhorse chronograph. At launch, small quantities of the UNICO calibre came equipped with carbon fibre main plates, an inwardly manifestation of what we had already seen with material advancements at the Manufacture like Magic Gold and Osmium. For those un-encumbered with tradition, the use of new materials was daring and the proverbial definition of “upsetting the apple cart”. For traditional collectors, there was simply no reference point with which to make judgement – every watch developed by the various Maisons were storied descendants or at times, at least tangentially related to some other famed reference point. For Hublot, no such comparison could be made. 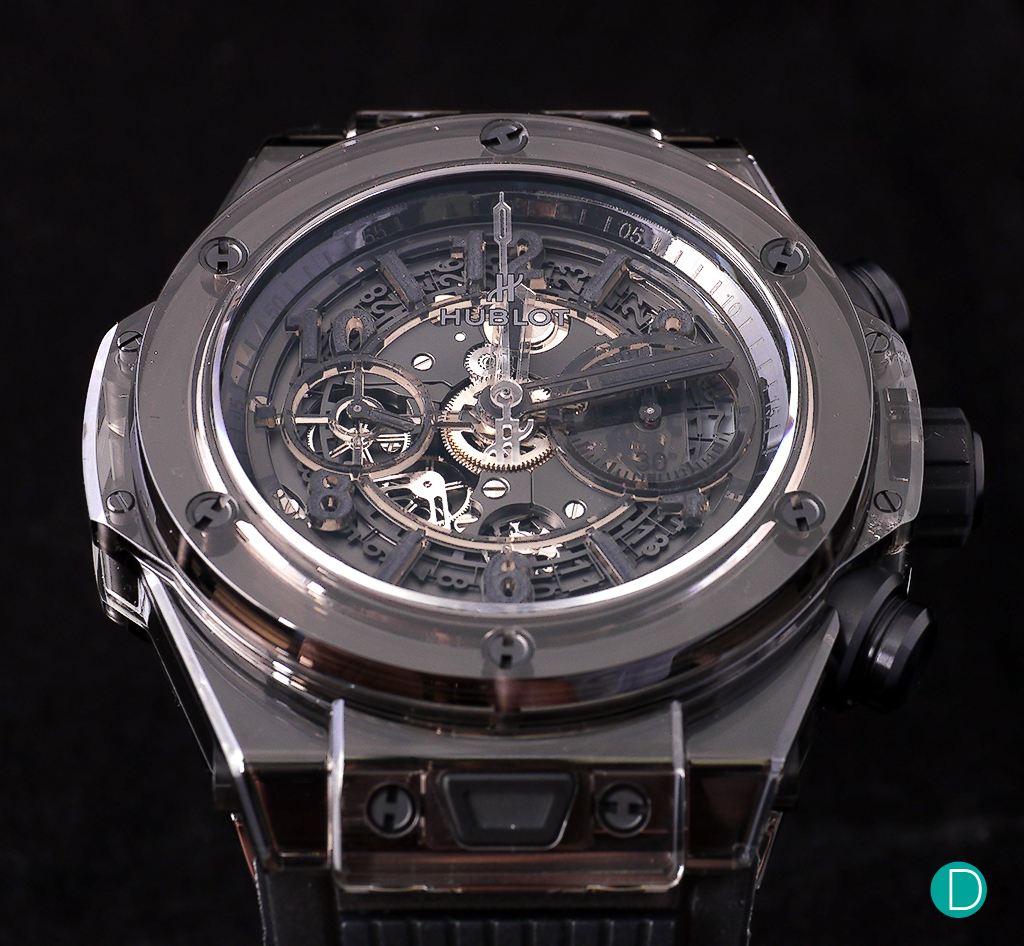 By 2013, the UNICO was finally offered as a production calibre in a greater diversity of models and houses in an updated Big Bang. Coincidentally (or was it), its rise came with the success (where many others had failed) with a collaboration timepieces in partnership with Ferrari. Distinctive style and the larger than life 45mm timepiece with the nigh un-scratchable blend of ceramic and gold (thus ‘Magic’) became the finest Big Bang ever produced became calling card for Hublot’s inevitable ascension.

Robust (modular interchangeable escapement with silicium escape wheel and pallet fork allowed for the swiftest of customer service), long lived (72 hours power reserve on an efficient bi-directional winding rotor versus the 7750’s single direction winding) and complex (330 parts), the UNICO HUB1242 flyback chronograph is everything one can expect from a contemporary manufacture. Even if “serious collectors” ignore the flash of heretofore unused materials, it’s hard to argue with the tradition and timelessness of such an innovative flyback chronograph. By that comparison, even the Royal Oak Offshore chronographs are not an integrated in-house movement (module upon calibre 3120) in the vein that UNICO is. Was Hublot aggressively marketed at the onset? Yes. Was it ‘vulgar’ to leverage itself on a myriad celebrity endorsements and placements? Maybe. But the truth is, no other watchmaker has achieved the prominence and ubiquity in moneyed circles as rapidly as Hublot has and this level of arguable commercialism (because they make around 40,000 pieces a year) has allowed them to invest in research and development much like how older veterans of the industry has. It can be argued then that marketing has outpaced their innovation but that to me is a nitpick rather than a true point of contention.

At 40 years young, ‘provenance’ is often the blunt instrument used to beat Hublot over the head with but consider how the tourbillon and repeaters, innovations which advanced the industry are considered as indicators of competence while critics continue to ignore advancements made at Hublot to date.

In summation, yes, Hublot is a serious watchmaker and in another 50 or so years, it would have accrued much lauded ‘provenance’ but consider this, what would you have given to be there at the birth of many of our beloved brands today and how many would yearn to say there were when the first Hublot watches rolled of the line in a 100 years? The 500 piece production is available in white and black.