We got our hands on this rare timepiece, and spent some time with this magnificent example of a grand complication done right. Patek Philippe 5016 in yellow gold,, a grande complication done right. Tourbillon, Retrograde Perpetual Calendar, Minute Repeater.
Typical of Patek Philippe tourbillons, there is no cutout on the dial to show the tourbillon,, and the words “TOURBILLON” and the serial number is printed on the dial.

Housed in a classic Patek case, in yellow gold, and equipped with a tourbillon, retrograde peroetual calendar with minute repeater, this watch is quite beautiful, and rather discrete. Can easily be quietly passed on the wrist of a gentleman or lady without a second glance, except for the informed observer who would recognize it instantly. PP 5016, the slide mechanism is the tell tale sign of the sonic abilities packed within the smallish case, just 36.8mm diameter.

The movement is a sight to behold! Magnificently laid out, the bridges sensuously laid out, in the typical Geneva tradition. Not only is the design and execution flawless, it also exudes a certain artisanal quality that is sublime. This is the magic that makes Patek Philippe lead as the Grande Dame of the watchmaking. The movement finishing, as mentioned is top drawer, as is expected from a no holds barred watch from Patek Philippe. The movement is magnificently laid out and finished. Côtes Circulaires, similar to Geneva stripes, but applied in a circular fashion is used in contrast to the more common Geneva stripes.

The third wheel is stylized in the shape of a topping tool’s wheel, and very nicely finished. This level of finishing is outstanding, and all the bridges are nicely anglaged, all points polished beautifully. 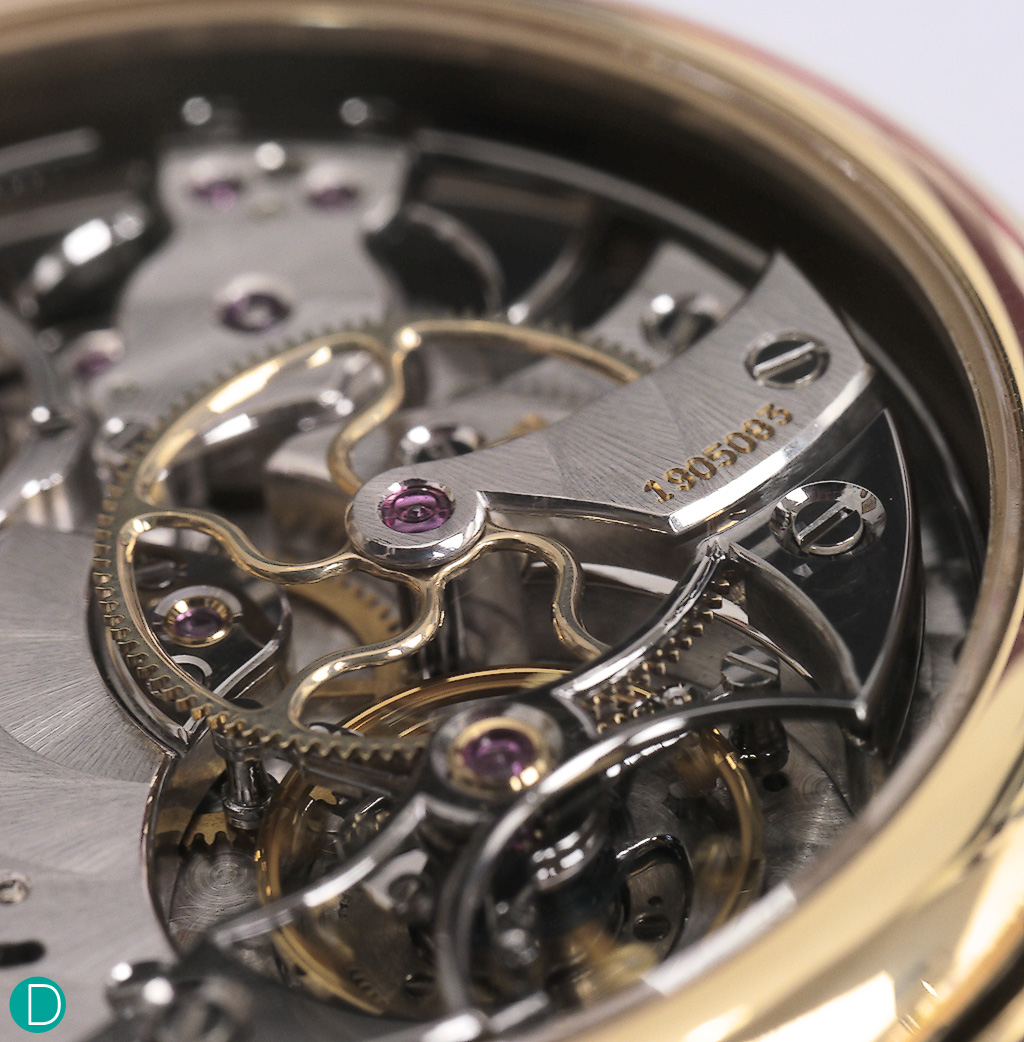 The third wheel, which drives the pinion of the tourbillon is stylized like the wheel of a topping tool.
Note the cock holding the wheel is beautifully designed and finished. Especially the inward facing curve is very well executed, sharply defined, nicely polished. This level of finishing is exemplary.

The entire movement is very well done. From the tourbillon cage, tourbillon bridge, the repeater regulator with the Calatrava logo, to the cock holding the third wheel and the hammers are just a pleasure to behold. To the naked eye, the movement looks wonderful. Take a loupe and examine every square millimeter and it is even the more amazing. The hand crafted cover with the Calatrava cross, a symbol which Patek Philippe has used successfully over the years as an icon of the brand, adorns as a cover over the minute repeater governor.

One of the small pointers to high horology is the gap between bridges. Done right, as in this Patek Philipe, the gap is very small. As an example, in the photograph above, note the gap between the cover of the governer and the bridge above is so close, that it looks the bridges are almost touching, though on closer examination is not quite. Note also the evenly anglaged edges of the bridges, and the highly polished chamfered sides. The tourbillon bridge. Classical in design and execution. Note the sharp inward and outward angles on the bridge, which are very well finished. Note the polished bridge edges. The inside edges can only be polished by hand, and indicates the high level of finishing on this watch.

This is a customer owned watch, with some bits on the movement which is not in pristine new condition, with some markings which are signs of use, but does not detract from the beauty and the light patina gained by the movement finish over time. A truly magnificent watch, in this particular example the striking sound was clean, clear, but for some reason lack some of the exuberant resonance which we have heard in some other Patek Philippe Minute Repeaters, perhaps the watch is in need of a small tweak at the workshop. See the video at the top of this article to hear how the watch sounds like.

But it this still one of the most beautiful, most desirable Patek Philippe, ever? We think so, do you agree?