The second son of Félicien Chopard, Louis-Ulysse Chopard (L.U.C.)was encouraged by his soil-toiling father to pick up the watchmaking trade. Like most Swiss agrarian communities of the day, the farmers practiced a profession of making movement components in the off-seasons and our young prodigy quickly learned that the ones who would most benefit most from their labours were the comptoirs and so, he quickly set out to achieve independence from a system he deemed broken.

By 1860, the 24 year old had founded the L.U.C. manufacturing company in Sonvilier where he was soon amassing a cult following with his blend of precise and robust timepieces but it was his chronometers marking time at Royal Courts of Nicholas II in Russia which earned him the international repute to pursue markets beyond Swiss borders.
The passing of the baton from father to son in 1921 soon led Paul Louis Chopard to move his father’s namesake firm to La Chaux-de-Fonds and eventually Geneva, watchmaking capital of haute horlogerie. Alas, even for a brand with of such esteemed provenance, it would fall to the vagaries of “family drama” – children who want no part of the business. The last heir to L.U.C., his grandson Paul André Chopard eventually had to look outside familial bonds, turning to Karl Scheufele, descendant of another dynasty of watchmakers and jewellers. Hailing from Pforzheim, Germany, Scheufele’s acquisition combined a new dimension of artistic creativity with inventive technical metier to a brand already well recognised for functionality and though Chopards no longer run the firm, the new family at the reins continue to perpetuate and honour the classic traditions of fine watchmaking started by the first of its name.

The Rebirth of L.U.C.

Today Scheufele’s children Caroline and Karl-Friedrich run the company with firm foundations in high jewellery and fine watchmaking. In 1976, just two short years of starting a ladies’ collection, Chopard would find itself with the first of its icons- the Happy Diamonds series where mobile diamonds slide and spin around the dial, imparting a sense of carefree whimsy and elegance, heretofore unheard of and unseen in the watch industry. 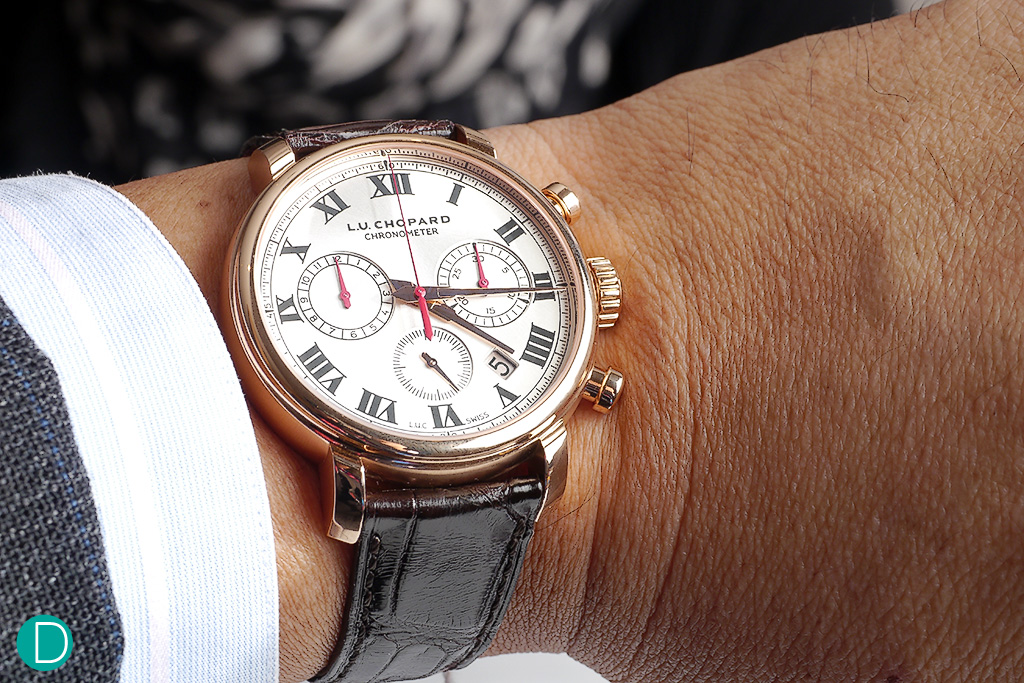 The Chopard LUC 1963 Chronograph on the wrist.

In the intervening years, the maison would slowly find its roots as envisioned by Louis-Ulysse. They launched their first St. Moritz Sport watch in 1980 and by 88, Chopard would create the Mille Miglia collection in celebration of the partnership with the Italian classic car rally. 20 years after the birth of their first icon, the company would return the L.U.C. name to fore- a watch manufacture in the Swiss Jura focused solely on returning the company to its origins- movements bearing the initials of Louis-Ulysse Chopard.

It’s no coincidence that within a year, the first timepiece to house a L.U.C. movement, the LUC 1860 is awarded “Watch of the Year” by Montres Passion. In less than a decade, Chopard would prove unequivocal watchmaking competence with their first L.U.C. Tourbillon in the Calibre 02.01.

If there was any doubt left, it was purged by the shining star of Baselworld 2012, the L.U.C. Triple Certification Tourbillon. A world’s first, Chopard’s tourbillon became the only watch in the world to earn three of the most prestigious Swiss watchmaking certifications. A beauty of such superlative construction and pedigree backed by the Swiss Official Chronometer Testing Institute (Contrôle Officiel Suisse des Chronomètres, or COSC) certificate, the Poinçon de Genève quality hallmark, and the Fleurier Quality Foundation label. The 43mm 18-carat rose gold with the distinctive L.U.C. curves was stunning and yet the possessor of distinguished certifications testifying to its superior quality, precision and reliability. If the Chopard had naysayers, they retreated before the paragon exemplar of haute horlogerie driven by the Manufacture L.U.C. Calibre 02-13-L, a movement fitted with four stacked and series-coupled barrels providing nine days power reserve, patented Quattro® first seen in 2000.

At Baselworld 2014, the maison demonstrated just how committed they were to corporate social responsibility when they unveiled the L.U.C Tourbillon QF Fairmined, the world’s first timepiece to be made with only Fairmined gold from South America, proving that there are costs too high to pay even for luxury goods. 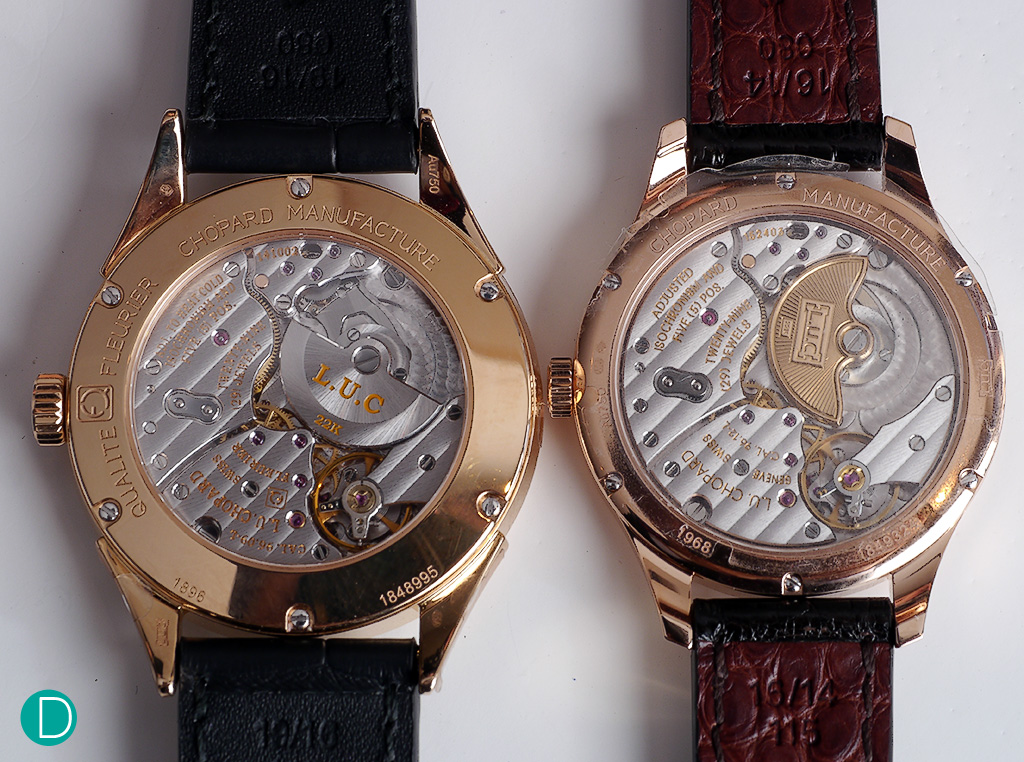 It was a name almost lost to the annals of watchmaking history (save for the most encyclopaedic of watch collectors). Yet, mid 2013, following Max Busser’s double balance wheel equipped Legacy 2 inspired by Philip Dufour’s Duality who in turn found common muse in a forgotten great master horologist, it was a name relegated to mere footnote in watchmaking history. But, there were rumblings, rumours carried on whispered wind that as far back as 2006, Karl-Friedrich Scheufele had acquired the brand and was looking to restore this substantial watchmaking legacy to its rightful status by creating exceptional timepieces in limited editions. Only the most exceptional timepieces, born of haute de gamme watchmaking would earn the right to bear the name – Ferdinand Berthoud. The Ferdinand Berthoud FB1 in rose gold with ceramic accents. The visual aesthetics is one which is quite powerful, and very beautiful in the flesh. The watch also has great presence both visually and in the heft it feels on the wrist.

Intellectually gifted, mechanically inclined, Berthoud was born in Plancemont, Val-de-Travers, only a stone’s throw from present day Chopard in Fleurier. His knowledge and skill in the field of marine chronometers and ornate clocks as well as scientific instruments made him a true renaissance man during the Age of Enlightenment. His works and research on horology can be counted on over 4,000 pages and 120 engraved plates and his prodigious brilliance recognised by fellow luminaries. Karl-Friedrich speaks at a private preview of Ferdinand Berthoud to privileged guests where Deployant was in attendance.

Commissioned “Horologist mechanic by appointment to the King and Navy” by the Imperial Courts in France, his brilliance was a contributing factor to surviving the French Revolution relatively unscathed despite his close ties to the monarchy. By 1804, the 77 year old was conferred “Knight of the Legion of Honour” by Napoleon.
Berthoud passed, age 80, childless and yet like the Chopards who found no interested heirs to the empire, the Scheufele family have proven themselves worthy vanguards of extraordinary watchmaking. Suffice it to say, Chopard’s revival of one of watchmaking’s finest minds should be evidence enough of their commitment to continued excellence.