Think of what is essential for a well-rounded watch collection and one inevitably stumbles upon the dress watch. The most versatile dress watch is one that only tells the time. A time-only piece is perfect not only for the most formal of occasions but also for a casual business drink down at the bar. Today, we compare two amazing time-only dress watches from two of the most revered manufacturers in watchmaking, the A. Lange & Söhne Saxonia Thin 37 mm and the Patek Philippe Calatrava Ref. 5119. The Saxonia Thin 37 mm and the Ref. 5119 are both dress watches with classic proportions (Saxonia: 37 x 5.9 mm; Ref. 5119: 36 x 7.2 mm). In this regard, they are similar, fighting against the trend of ever-growing dress watch sizes by staying true to their identity. That is however, as far as similarities go between the two timepieces (with respect to design). On one hand, the Ref. 5119 is a paragon of old world charm. The Roman numerals, seconds sub-dial and manufacturer’s marquee are black printed onto a white lacquered dial in a way that imbues an air of tradition and class. Even considering that, the most defining element of the Ref. 5119 remains the ‘clous de Paris’ hobnail pattern on its bezel. The hobnail bezel first appeared on the venerable Calatrava Ref. 3919 and has since become an iconic design, instantly recognisable not just by the brand’s enthusiasts but also the watch community in general. The exceedingly charming hobnail bezel and domed sapphire crystal of the Ref. 5119 is tempered by the simple yet elegant dial.

On the other hand, the design of the Saxonia Thin 37 mm is better described as ‘contemporary’ and ‘austere’. The case lacks any defining features as it is after all a Lange stock standard case. The dial is even more minimalist, featuring only applied hour makers and two hands. Make no mistake, this isn’t necessarily a bad thing. Less is often more, and it certainly is the case with the Saxonia Thin 37 mm. What the Saxonia lacks in outright flair and heritage, it makes up for with design purity and sleekness. Besides, a dress watch is traditionally meant to be clean with minimal frills and the Saxonia with only two hands, no seconds or even a minute scale actually fits the bill perfectly. 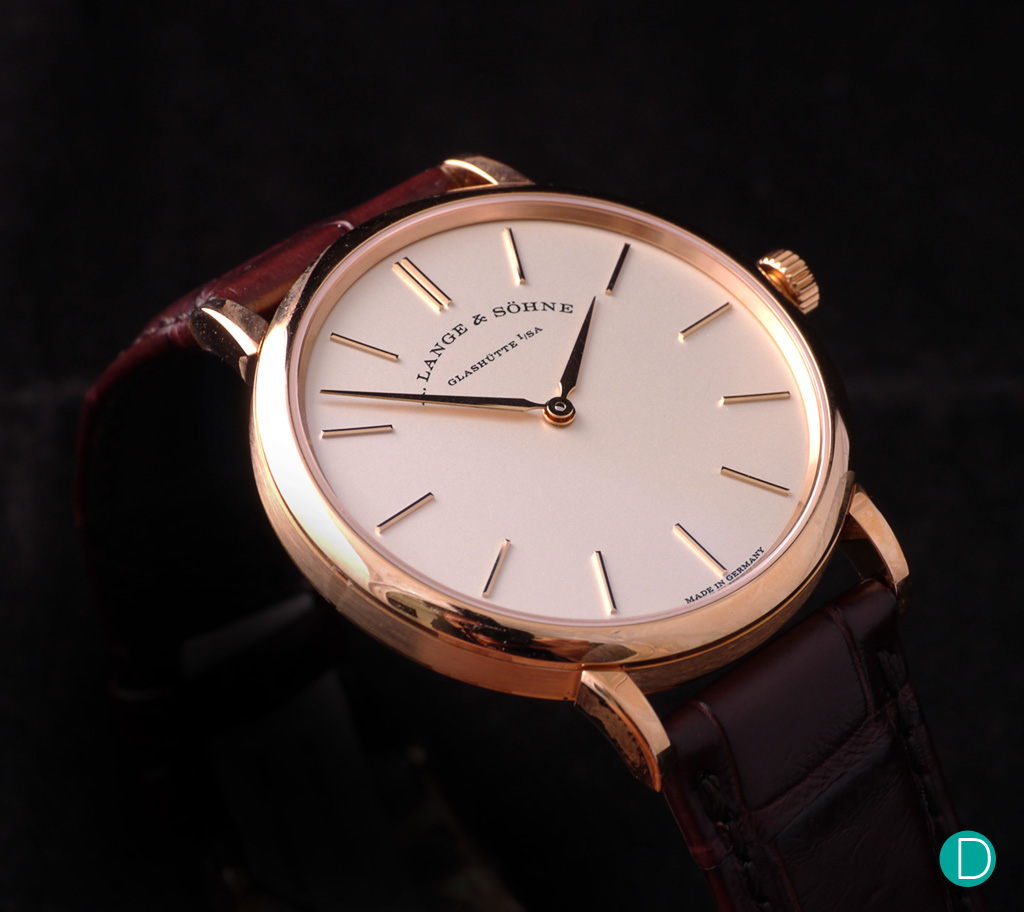 The face of a true dress watch. The design of the Saxonia Thin 37 mm may not be as charismatic as that of the Ref. 5119 but its austerity makes it the ideal dress watch from a purist standpoint.

The architecture and aesthetics of the engine inside

Beating inside both watches are movements that were inspired from pocket watches of old. The Calibre 215 PS powering the Ref. 5119 is, in our opinion, the more visually interesting of the two. It boasts an architecture that is satisfying in that the bridge layout allows for superb visibility of the wheels. The Calibre L093.1 which powers the Saxonia Thin 37 mm meanwhile has a three-quarter plate architecture. While this keeps the movement true to its pocket watch roots, it has the unfortunate side effect of covering up a huge portion of the movement. The pocket watch-style movement of the Ref. 5119 is nothing short of breathtaking. The excellent visibility of the wheels will undoubtedly provide gratification to collector-enthusiasts.

Where the Calibre L093.1 truly shines though is in overall movement aesthetics and finishing. The three-quarter plate visible from the case back is rendered in raw German silver (an alloy of zinc, nickel and copper). It tarnishes ridiculously easily if handled without utmost care. The only way around this is for watchmakers to take the movement apart after first assembly/testing, clean the movement, touch up the finishing, and then re-assemble – the famed Lange double assembly. Why use German silver then? Well, one reason is that the alloy lends itself to some spectacular striping. Indeed the striping (specifically called Glashütte ribbing) on the Calibre L093.1 appears extraordinarily deep and creamy, more so than if it were applied onto rhodium-plated brass bridges (like in the Calibre 215 PS). The astounding depth and richness of Glashütte ribbing on German silver.

Furthermore, the grey hue of the German silver gradually turns golden as it ages and develops a patina, making the movement somewhat ‘alive’. This contrasts significantly with the cold, inorganic look of rhodium-plated brass found in most Swiss movements. Other finishing and decorative elements that distinguish the Calibre L093.1 from the Calibre 215 PS include heat-blued screws, gold screw-down chatons, the uniquely hand-engraved balance cock, and the black-polished escape wheel cap and swan neck regulator. Few can match the variety and depth of finishing applied to a Lange calibre, made possible by the famed double assembly process. This is not the Calibre L093.1, though it should be noted that all Lange calibres possess the same level of finishing.

Overall, the Lange simply has more varied (and challenging) finishes applied onto the movement. The choice use of German silver also results in a more aesthetically-pleasing final product. The double assembly process, where delicate final finishes are applied, doesn’t just allow a Lange movement to be extra decorative, it is also a must when working with German silver. This is not to say the Calibre 215 PS isn’t impressive in its finishing. Quite the contrary, the finissage of the Calibre 215 PS is in actuality very aesthetically-pleasing – take for instance the sheer number of black-polished screw heads and external angles on the polished bevels of bridges. The movement as a whole may not have been showered with the care and attention equivalent to that afforded to the Lange (nor is it possible, given that Patek Philippe makes more than 10x more watches per annum), but in terms of aesthetics, it still is superlative to most base calibres used in the fine watchmaking scene today. It’s no Lange but the Calibre 215 PS is still gorgeous with its numerous black-polished screw heads and sumptuously angled bevels. Not to mention as well the visibility of the circular-grained wheels afforded by the movement’s pocket watch-style bridge layout.

Talking about value in fine mechanical timepieces is a strange thing. The idea of parting with thousands of dollars for what the general public considers to be obsolete time-telling devices is counter-intuitive. Being luxury goods, these watches are not only unneeded for daily living but also come with inflated price tags. But that is the inevitable ransom that we pay to satisfy our curiosity and wants, to partake in something that has been painstakingly and superfluously crafted. So long as we, as watch enthusiasts and collectors, see value in craftsmanship and heritage, a fine mechanical timepiece – the Ref. 5119 and Saxonia Thin 37 mm included – will be worth its price. A fine mechanical timepiece today is no longer about time-telling. Rather it is about having a piece of art and history as an extension and expression of oneself.

Within haute horlogerie, how much bang-for-buck one derives from a purchase can be gauged by what one gets for every dollar spent, and these things can be tangible (materials, complications, finishing, craftsmanship) or intangible (brand perception, heritage, provenance). With the Saxonia Thin 37 mm, its main source of value comes from its superlative movement finishing, made possible by the heroic number of man-hours and extent of expertise devoted to it. It is estimated that up to a third of the cost of an haute horlogerie timepiece resides purely in movement finishing – you can bet that this is especially true for the Saxonia. Patek Philippe has no doubt done a great job with the finishing of the Calibre 215 PS, but it just isn’t in the league of Lange’s Calibre L093.1. A significant chunk of the value of the Saxonia Thin 37 mm lies in its handmade movement.

What the Ref. 5119 does have over the Saxonia though is twofold: a rich heritage, and brand prestige. The Ref. 5119 comes from an exalted family of watches that is the Calatrava. With a history spanning 85 years and counting, the Calatrava is the gold standard by which all other dress watches are compared to. It is timelessness incarnate and impervious to short-lived trends that are so systemic in today’s watchmaking industry. The Ref. 5119 remains faithful to the philosophies and design of the Calatrava line and is thus a worthy successor of its legend. In contrast, the Saxonia hasn’t got a heritage that is anywhere near comparable to that of the Ref. 5119. The A. Lange & Söhne we know and love today is, after all, only 27 years old. Furthermore, the Ref. 5119 is a Patek Philippe, and Patek Philippe is recognised as one of the most prestigious watchmaking maisons in the world whether or not one cares to admit it. Sure, the watch cognoscenti views A. Lange & Söhne with reverence, but in the grand scheme of things, it is still considered a niche brand that remains obscure to most. Until A. Lange & Söhne attains a longer history and a more substantial reach in the market, it’d be a stretch to say that it sits alongside Patek Philippe in prestige. The Ref. 5119 continues to bear the flag for Patek Philippe’s flagship Calatrava line, 85 years after the first of its kind was introduced.

So the question remains, how much do our contenders actually cost? Let’s start with the Saxonia – the Saxonia Thin 37 mm comes at an unprecedented USD14,800 (SGD21,300), officially the price of entry into A. Lange & Söhne. It’s not exactly grocery money but for what you get (flawless craftsmanship and movement finishing that puts all to shame), it is immense value for money relative to other luxury timepieces. It isn’t far-fetched at all to think that it is the best timepiece money can buy south of USD15,000. Meanwhile, the Ref. 5119 is priced at about USD21,400 or (SGD29,000) – that’s over USD6,000 more than the Saxonia. We’ve articulated where the value of each timepiece resides in. Design preference notwithstanding, one therefore has to ask: is the heritage and brand prestige worth USD6,000+? Over better finissage? There is no right or wrong answer in the end; it is just a matter of what we value in a watch as individuals. The Saxonia Thin 37 mm represents excellent value for money (for a luxury timepiece) and makes for the perfect entry piece into A. Lange & Söhne.

Both the Calatrava Ref. 5119 and Saxonia Thin 37 mm are a blessing to haute horlogerie. If we had to pick between the two, it’d be the Saxonia – we can’t ignore how aggressively priced it is. In this particular case, we don’t quite mind that the Saxonia hasn’t got the same level of heritage or prestige as the Ref. 5119… yet. We just like the fact that Lange doesn’t compromise on quality and its values even on what is an entry-level timepiece for the brand. All that said, we wouldn’t kick the Ref. 5119 out of bed either. The two watches offer tantalising options to potential clients, and as time passes, so will the market decide which is the better product. The Saxonia Thin 37 mm is our preference for its faultless design, dreamy movement aesthetics, and sensible pricing.