Panerai’s history is one which is rooted on diving and naval watches. Military styled watches which are large, often bulky, but tough and reliable. In 2017, for the first time, Panerai extended this remit to include dress watches. Enter the Panerai Luminor Due. The early pre-SIHH releases were in 45mm and 43mm, announced and available from September 2017. We covered them here. And for SIHH 2018, Panerai unleased the 38mm models. Many initially go, “huh?”, but most, after viewing and handling the watches give the thumbs up to Panerai. Here is our hands-on review of the Panerai Luminor Due 38: the PAM dress watch. Panerai Due 38mm: the Dress Watch from Panerai

Dress watches is not the category which one usually associates Panerai watches with. Panerai are more often thought of to belong to the Tool Watches, or the Dive Watches category. After all the firm’s illustrious history comes from the small Florentine dealer supplying the Italian Navy with diving watches of the latter’s design. We will not delve into the history of Panerai, which is a rich fabric of many twists and turns. Perhaps another article. But while the watches are military in origin, and intention, many of their fans, the most rabid who call themselves Paneristi, wear the watches with all levels of formality.Despite this, we cannot bring ourselves to speak of Panerai watches as dress watches.

Until 2017. So it when the Panerai Due was first unveiled, it became the first Panerai intended for dress use. Acceptance was mild, but steady. While purist Paneristi may scoff at the Due, it soon won the brand many new fans. The Due was more elegant, and thinner than its brethren. A special Limited Edition Due to commemorate the Singapore retailer Cortina’s Anniversary was released in November 2017, and met with quite a success. The very handsome Panerai Due 38 in rose gold and an ivory case. This is perhaps our favourite amongst the new watches.

The case remains the same Luminor style case with the patented crown guard and lever protection system. This gives the Due 38 much of the genetic material to look like any other Panerai. The proportions are well chosen, and on its own, without a handy size references to compare, the Due 38 looks like any other Luminor. But put it on your wrist, and the entire picture tranforms itself. The 38mm case diameter, coupled with the 11.2mm thickness no longer has the bulky, tool watch feel of the Panerai bearing on one’s wrist. But rather the svelte, sleek and rather elegant Due 38 slips on, without fanfare and fulfills its role as a dress watch. Beautifully. Panerai Due 38 PAM755, shown here in a stainless steel case with an ivory dial.

Four versions are introduced in SIHH. Two in a stainless steel case, and two in a rose gold case. Both case materials are offered with a beautiful ivory dial with blue Arabic numerals and luminous dots. In addition, the stainless steel version is offered in a very traditional Panerai looking anthracite dial, while the rose gold is also available in a black dial. 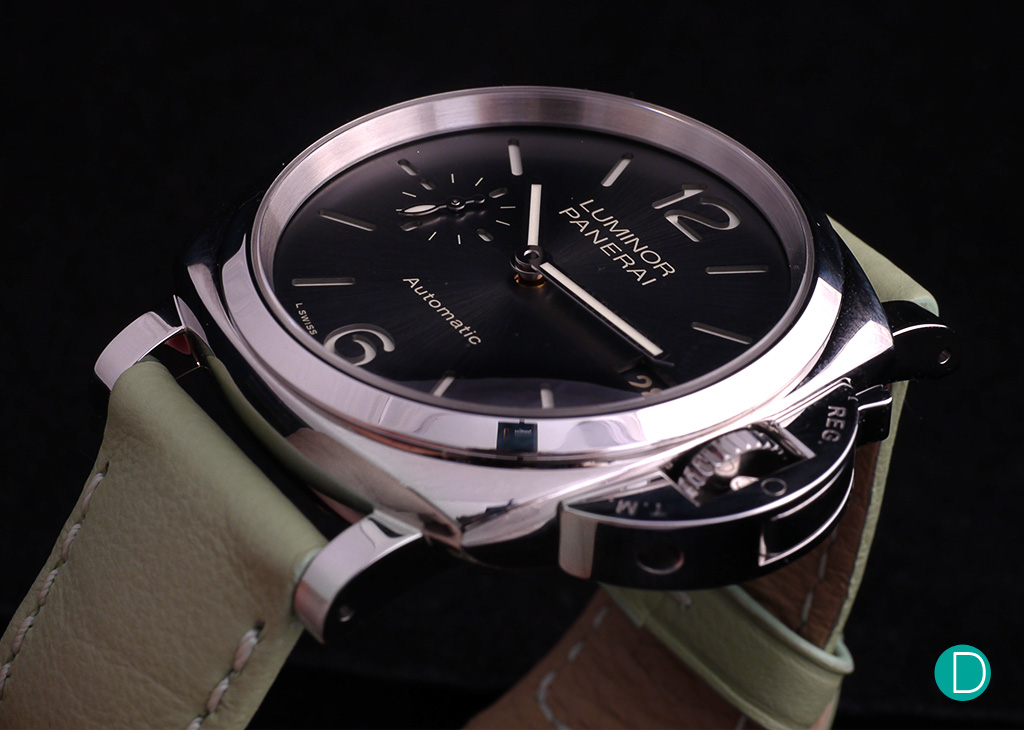 The anthracite dial is altogether more sober than the ivory dialed cousins, especially with the stainless steel case.

Hands are the traditional Panerai lancet style hands with the seconds hands in a leaf shape with a counter balance tail. The luminous dots and the hands are filled with very bright SuperLuminova, and the watch is legible in the dark. A date is displayed at 3 o’clock. Many diving enthusiasts often bemoan the addition of a date on dive watches, arguing that divers do not need the display. We have a discussion on this in our review of the Rolex Sea Dweller. But in the Panerai Due avoids the saturation diving discussion altogether. One could argue that as the Due is no longer a dive watch, and as a dress watch, the addition of a date display is not misplaced. And we feel that the rather small date displayed at 3 o’clock is rather discreet.

As a dress watch, the Panerai Due 38 now has legitimacy to display the movement through its sapphire case back. And this is fitted on the rose gold model with the ivory dial.

The stainless steel models come with a solid stainless steel backs, while the other rose gold model, with the black dial has a solid gold back engraved with the Chinese character 福 (meaning fortune). The symbol is of great cultural significance to the Chinese, and is widely used as a decoration for the auspicious implications. The symbol is surrounded by plum flowers, expressing resilience and perseverance and with peonies which symbolise wealth. It is interesting that the lengths that many brands go to in response to the important Chinese market.

All versions are fitted with the caliber OPXXXIV movement.  Examining the movement through the sapphire case back of the PAM 756, we observe that while the finishing and layout of the movement will not win any beauty contests, it does strike us as rather competently designed and nicely finished. All engineering aspects are well addressed.

The OPXXXIV is a new movement from Panerai. In PAM-speak, the movement is called a “group movement”, meaning that while it is in-house within Richemont, it is also shared base among several brands within the group. However, we understand that Panerai has modified it to meet their needs, including a 3 day power reserve and the subsidiary seconds hand at 9 o’clock. From the case back of the PAM756, the automatic mechanical, OP XXXIV calibre is visible. The movement is 12½ lignes, 4.2mm thick, 23 jewels, 28,800 alternations/hour. Incabloc® anti-shock device. 3 Days Power Reserve, one barrel. 171 components

We were quite taken by the beauty and elegance of the Luminor case, sized appropriately in the Panerai Due 38 case . On the wrist, it feels right, and sits well. And unlike many of its larger sized brethren, it sits comfortably under the cuffs of a dress shirt.

The Panerai Luminor Due 38 carries many of the signatures of the traditional Luminor watches. The design DNA of the Luminor line is very strong, but somehow the designers have managed to make it more elegant. More sleek and beautiful. More like a dress watch. On the wrist the 38mm case size is just perfect to slip under the shirt cuff. And perhaps perfect for the more slender feminine wrists too.

We think the Panerai Luminor Due 38 will be a good commercial success. The watch is rather unisex in its appeal, fitting well the wrists of most men and women. Indeed, as an anecdote, the most talked about watch, at least among the female journalists during the show was the beauty and the attractiveness of the Due 38.

Back Stainless steel models have closed back, while the rose gold, ivory dial edition has a see-through sapphire crystal. On the rose gold black dial model, a massive rose gold back with the Chinese character 福 (Fu) engraved.

Device protecting the crown (Protected as a trademark)

Date at 3 o’clock and small seconds at 9 o’clock.