More than 160 years ago, before becoming purveyors and then eventually makers of fine timepieces, two young partners started out as a Stationer and retailer of ‘fancy goods’ on the lower west side of Manhattan in 1837, the company? Tiffany & Young.

Who would have thought that from the foundations of a $1,000 family loan, the partners would herald a successful firm proffering fine silver, international curious, jewellery and form one of the most famed and influential watch collaborations in watch history; Tiffany & Co. (once Charles Lewis Tiffany bought out his partner) brought fine Swiss watchmaking to the American market in its heyday; to date, starting from an initial agreement for six months, Tiffany & Co is the only purveyor to place their name on select collections of watches from Patek Philippe. It’s important to note that when some companies deign to enter the lucrative field of watchmaking, some borrow prestige and provenance. In the context that Patek and Tiffany share only a year’s difference in founding and that they inked their collaborative agreement in 1854 to appoint Tiffany & Co as exclusive agents, there’s little doubt their shared history (and shared manufacturing facilities) appeared to almost inextricably bind both elite jeweller and elite watchmaker in a watchmaking love story that was all but fated.

Alas, it was not to be, according to John Reardon, Head of Christies Watch Department that even though Tiffany & Co’s Geneva watchmaking facilities were eventually bought over by Patek Philippe and when the erstwhile watchmakers were taking offers for acquisition, Tiffany & Co. was deadlocked in a race with Fabrique de Cadrans Stern Frères, Patek Philippe’s dial maker.; regrettably, no historical documents have been found recording the reasons why the decision was made to go with the Stern brothers. But we digress.

“I just saw a clock in the jewelry and silver exhibit that you ought to have. It was made by Tiffany. It’s the daddy of all clocks; just won first prize. It not only tells the hours and minutes and seconds but the turn of the tides, phases of the moon, price of eggs and who’s got your umbrella.”

It is contemporary business strategy to acquire existing watchmaking concerns when a brand wishes to pursue a path in watchmaking but in 1861, Tiffany watches were already being made out of a small watchmaking factory at 10 Grand Quai Tiffany, Geneva. By 1874, Tiffany had expanded its Swiss operations by establishing a technologically advanced facility on Place Cornavin while showcasing their innovative prowess with clockmaking showroom on the fourth floor of their store at Union Square, New York. As a luxury brand, Tiffany was an almost modern, thoroughly globalised conglomerate. Don’t believe me? When British and French soldiers looted the Chinese Emperor Xinafeng’s Yuanming Yuan palace in 1859, they found the largest collection of Tiffany & Co fine watches. By 1866, Tiffany was making its own watches. 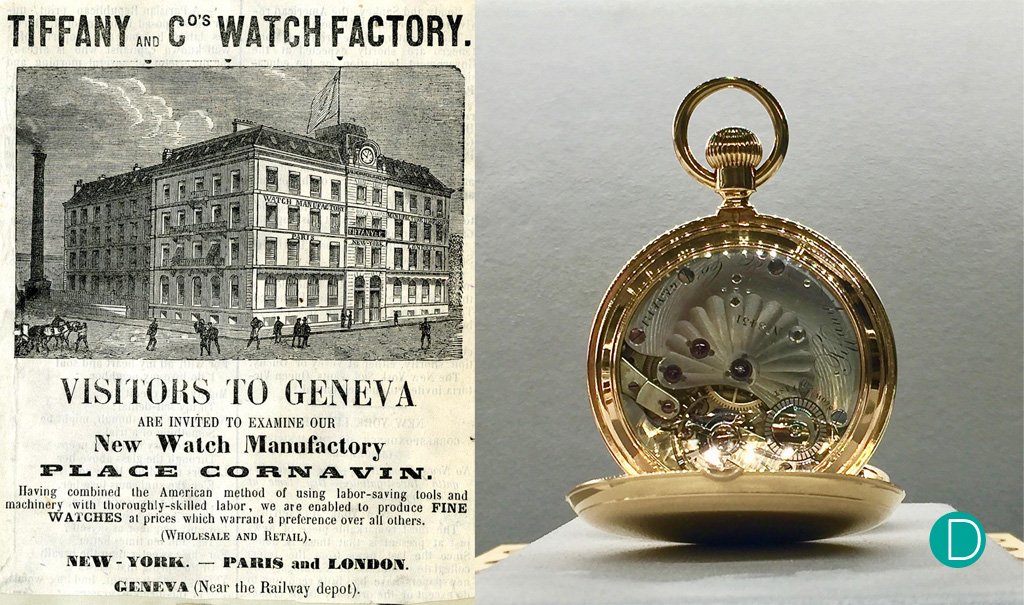 In 1875, Tiffany & Co. is assigned its first patent for watch improvements, including watch hand settings, anchor escapement for watches and watch regulators. You can notice that the regulation system on the balance cock on pocket watch (right) is unlike what is seen in even the most authentically classic watches today.

It is impossible to highlight the almost fateful evolution of Tiffany watches without re-iterating Tiffany & Co.’s early history, when Tiffany first opened on lower Broadway, it sold no clocks nor watches. But it 1876, Mark Twain, author and Tiffany salesman sold a $25,000 clock to Baldwin for use in his palatial $3 million hotel on the corner of Market and Powell streets in San Francisco. It was a clock that would become as wondrous as the Baldwin Hotel’s curated selection of Tiffany silverware and it would solidify Tiffany’s position as a premier watchmaker on both East and West coasts of the continental United States. Thus, establishing Tiffany & Co.’s watchmaking bona fides is uncontested fact and not mere marketing and historical appropriation.

It is perhaps historical irony that such an elegant jeweller would become notable for one of the most martial and masculine of watch complications – the chronograph. Tiffany & Co. Enjoyed great success with their “Tiffany Timers” and nearly all components of early Tiffany chronographs or “timing watches” were produced in Geneva at the 10 Grand Quai Tiffany watchmaking facility. By February 1868, the stem-winding watches boasted a list of prominent clientele including Winston Churchill’s grandfather and former owner of the New York Times, Leonard W. Jerome. 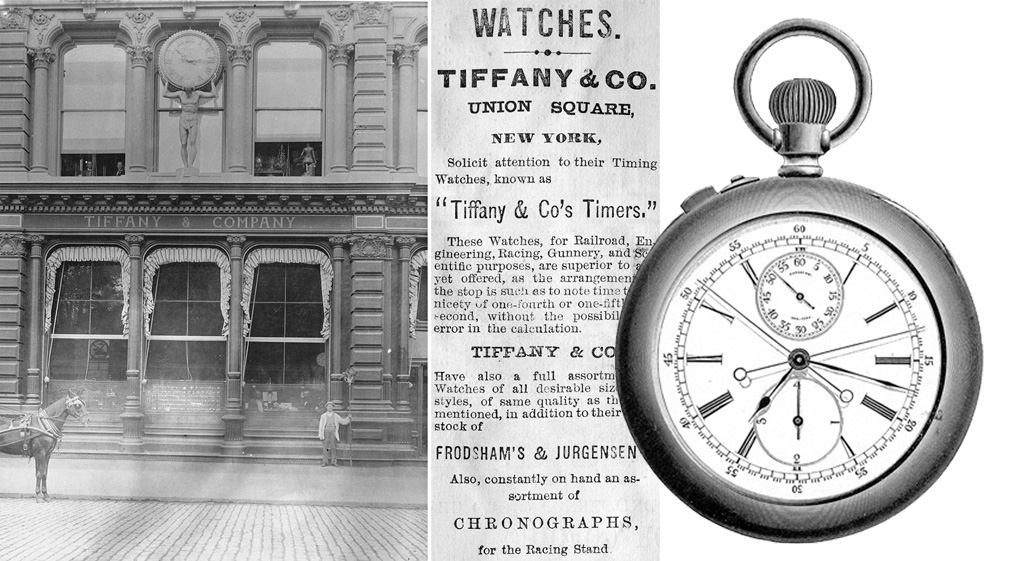 Left: Charles Lewis Tiffany installs a statue of Atlas holding a clock above the entrance of his store. It was one of the first public clocks in New York City. Right: Tiffany initiated several watchmaking initiations that were significant. An early stopwatch, the Tiffany Timer was used for scientific and engineering functions, along with sporting events.

By August 10, 1875, Tiffany watches were such marvels that the new advanced Tiffany watch factory situated at Place Cornavin near Geneva’s central railway station became a recommended site to visit as evidenced by the article in The Swiss Chronicle.

“We will take the best American machinery, plant it in Geneva, combine it with the most accomplished manual skill of Geneva workmen and solve the problem of how to produce the most perfect watch at the lowest price. Of course the idea has got to succeed; and it is only a question of time about how long other houses can stand out upon the old ways before coming into the new system.” – The Swiss Chronicle, 10 August 1875, on “Sights worth seeing” of Geneva

Then as now, provenance is an integral element in the industry and you accrue serious bona fides when the up and coming watchmaker of the era takes an interest in the country’s first and only Steam-powered manufactory. In December 1878, it was formally announced by the Horological Journal amid some controversy that Patek Philippe & Co.’s new factory was American in origin because it was previously owned by Tiffany & Co. From this, we can deduce that the first horological arms-race was not Swiss v Japan by way of Quartz, it was Swiss v US by way of Geneva buying precision American machinery and with the skill of Swiss artisans, the hope to compete successfully against behemoths of the day: Tiffany, Waltham and Elgin, among others. While Tiffany produced almost all chronograph components in-house for precision, Tiffany Gemologist George Kunz was working on another issue which could fundamentally have altered the demand and necessity for Repeater watches for which Tiffany had also developed a following for. In 1903, he finally developed and patented the green radium for use on their pocket watches and it was the first time pocket watches could be read in the twilight hours.

Thus, Tiffany’s tradition as a watchmaker of the highest order can be traced through a timeline of remarkable innovations that stretches from its foundation in New York City. Coupled with an impressive roster of Tiffany watch clients, the company became nigh synonymous with its native city – a love story which began from founding and punctuated with acts of public service like providing denizens of the city with accurate time-keeping: a clock held aloft by Atlas in 1853. Tiffany met the increasing demand for gold pocket watches with advanced movements that chimed the hour and quarter-hour; diamond-encrusted lapel watches and timepieces embellished with pastoral scenes in enamel, and mythic figures, floral motifs and fine scrolls engraved in gold.

By the 1880s, Mr. Tiffany  and his namesake brand had become a world-renowned jeweler and watchmaker with a reputation for fine watchmaking, and unparalleled customer service, defined by the weekly regulation of over 400 clocks in the homes of Tiffany customers, which began with the adoption of standard time in 1883; and of course, furthering the precision of the mythic ‘New York Minute’ brought forth almost 30 years ago with Atlas and his clock. Inspired by President Franklin Delano Roosevelt’s 1945 Tiffany watch which he wore to the historic Yalta Conference, Tiffany & Co launched the handsome CT60 series of chronographs and calendar watches, both allusions to the historic catalog of offerings which Tiffany & Co. offered their esteemed guests since 1847. Whether as a vintage driver’s watch or a watch for the modern typist, the Tiffany East West watch literally turns the rules of watchmaking on their side with its audacious design.