School’s out, and summer’s in! For some of the students, summer is a good time to take a break from the hectic semester and explore different places by backpacking. For the rest, like the author, they rather prefer to build experiences through internship experiences. So if one lands a dream summer internship at a top financial house, a massive MNC, or a reputable law firm, or looking to convert the internship into a full-time position, what are the watch recommendations for summer internship.

As watch geeks, some of us will actually buy a timepiece to celebrate a milestone. But bearing in mind that students have a lower budget, we will be recommending watches that are relatively more affordable, and yet suits the industry or organisation that one is doing his/her internship. So, what are the watches that we have selected? Let’s find out! 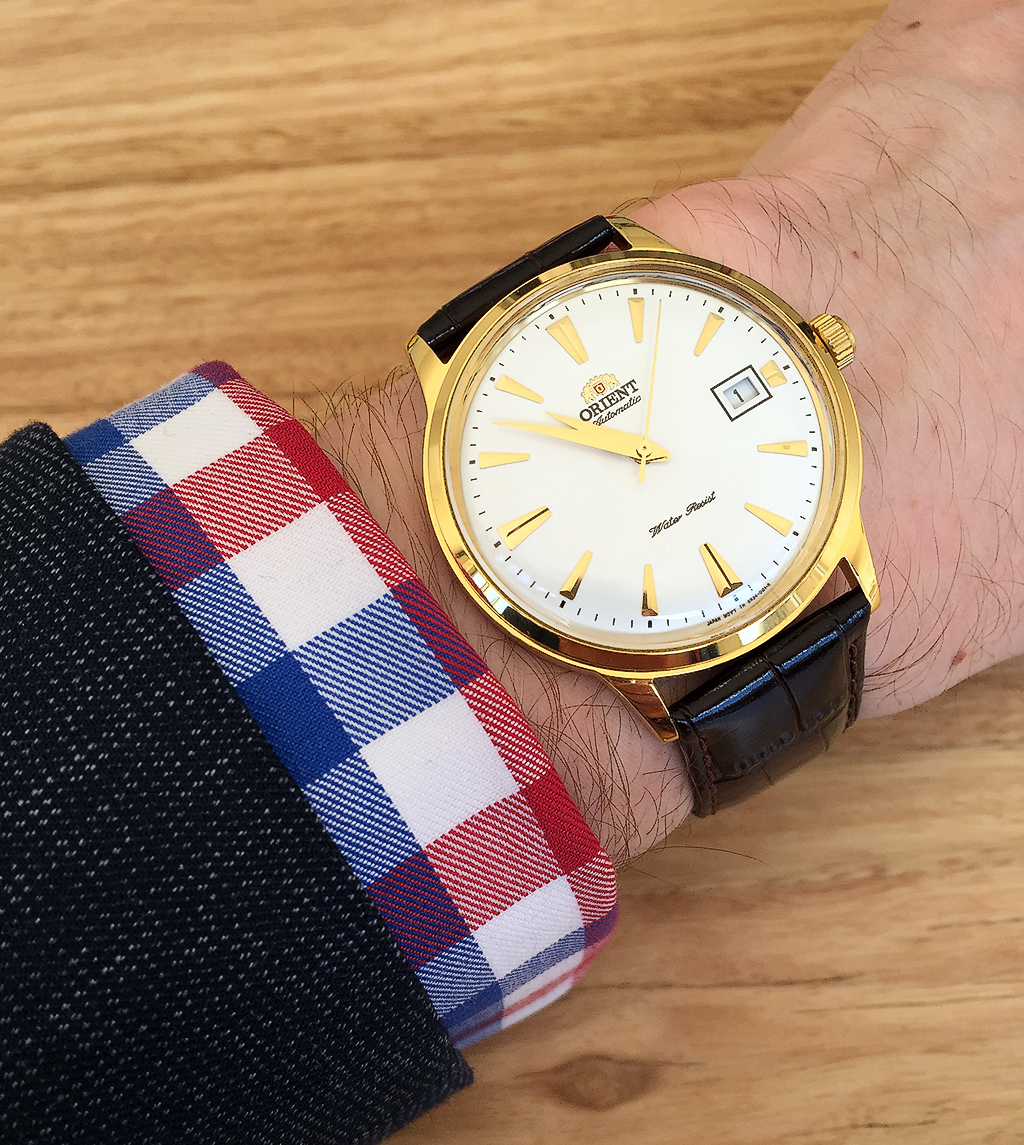 The Orient Bambino Automatic. A simple, and value-for-money dress watch.

We begin this week’s article with a timepiece that is relatively affordable for the masses: Orient Bambino Automatic.

Orient is a Japanese watch manufacturer and it is definitely no stranger to collectors from Asia. They are known for making very affordable and value-for-money timepieces, similar to Seiko. The Bambino is one of the collections in the repertoire – focusing on dressier and classy pieces. It is fitted with a decently produced automatic movement, with an additional date display function and a power reserve of around 40 hours.

Priced at approximately S$225, the 40.5mm timepiece is definitely a good-looking watch with an excellent value proposition. We highly recommend this to anyone who is looking for an affordable, yet dressy timepiece. The new SEVENFRIDAY S-series. A fun, yet affordable timepiece.

Life is not all about business. There should be some element of fun in it as well, which leads us to the new SEVENFRIDAY S-series.

SEVNFRIDAY is another brand that many collectors will recognise. Launched in 2012, the trend-setting watch manufacturer produces its now iconic rounded square watches, which is a hit with many collectors. What is also appealing is its industrial inspired aesthetics, as well as its relatively affordable price point.

The S-series is the latest iteration from the trendy watch manufacturer, and it seems to be an evolution from the original P-series. Powered by the Miyota 82S5 movement, the 47mm timepiece features an open balance wheel and a power reserve of around 40 hours. The watch is priced at S$1,915. The watch’s hip rep due to its heavy leverage on social media and digital platforms will appeal to those doing his/her internship in the creative or media industry. In the recent years, many watchmakers have caught the trend of producing homage watches that were made in the yesteryears. It was a brilliant move – considering the commercial successes of many watch producers, as well as the hype that it had generated over the last five years or so.

In this year’s Baselworld, Oris had decided to dig into their archives to produce another classic. The new Chronoris Date, which was based on an icon in the 70s, is a barrel-shaped timepiece with an interesting colour scheme. Unlike its predecessor that features a chronograph, the new timepiece is instead fitted with an inner rotating bezel. That function is adjusted and operated by the crown at the 4 o’clock position of the watch.

The 39mm timepiece is a nice tribute to an icon of the 70s, and we reckon this gorgeous timepiece might appeal to many collectors. The watch retail at S$2,300 onwards, with three different strap options that significantly different aesthetics of this timepiece. Continuing with the vintage theme, we have another excellent alternative from Rado with the new Hyperchrome Captain Cook.

The Captain Cook is a timepiece that was inspired by the diver’s watch in the 60s. During that era, there are many manufacturers producing different interpretation of the diver’s watch with varying levels of success. Rado is one of them, and half a century later, the Lengnau-based watchmaker had decided to produce a modern iteration of the popular tool watch. The new model, which is fitted with the 11 1⁄2 ETA C07.611 movement, comes with modern touches. Several notable improvements include the 80 hour power reserve, as well as the use of a ceramic bezel.

What we particularly like about the new Hyperchrome Captain Cook is its case profile. The watch is sized nicely at 37mm, with a side profile of only 11.1mm. This is definitely a timepiece that ticks all the right boxes, combining classic looks with modern ingenuity. Priced at S$2,530, we reckon this might be an interesting piece for young collectors who are into vintage-inspired timepieces. Following that, we take a look at one of the more interesting entrants into the horological world. Cue Yvo Staudt from the Netherlands – the brainchild behind Staudt Watches.

Yvo was interested in watches since young, and his passion for it proliferated when he was reading up on them when he was 14. He began experimenting with old watch movements, and he decided to eventually build his watches after he couldn’t find on that matches his budget and criteria. Eventually, he decided to focus full-time on watches in 2014, after his girlfriend had broken her back during an accident (and ditching his professional musical career in the process).

The Praeludium is one of the first collections in Staudt’s repertoire. It is a simple three-hand watch, featuring a hand-wound Unitas movement that is modified to his specifications. It is self-assembled, with three-quarter gold-plated bridge, enhanced beat rate (21,600 instead of 18,000, swan-neck regulator and the use of chatons, jewels, and blued screws. Every other component, such as the case, dial, and hands are also designed by Yvo himself.

The 42.5mm timepiece is not just any timepiece – it is an amalgamation of Yvo’s stories and passion, combined and crafted into a watch. The Praeludium is priced at €2,349 (approximately S$3,650), and we feel that it is perfect for someone who wishes to own a timepiece that is special and unique from the rest of the crowd. It is also very dressy and elegant, which is suitable for those who are interning in the corporate world. We end the article with one of our favourite watchmakers from Germany: NOMOS.

The Glashutte-based watch manufacturer had always impressed us thoroughly, with its simple Bauhaus-inspired design and exceptional in-house movements. But there was one watch in particular that had truly caught our attention. It is the Zürich Weltzeit nachtblau, or more commonly known as the NOMOS Worldtimer.

The first thing that had caught our attention, besides its stunning blue dial, is the watch’s simple design. We love how NOMOS have incorporated the minimalist look, without compromising on the functionality of the timepiece. In addition, the watch is powered by their in-house self-winding Calibre 5201 – which features its proprietary swing system and a decent power reserve of around 42 hours.

Priced at S$7,570, the Zürich Weltzeit nachtblau is a tad pricier than most of the watches that we have highlighted today. However, we feel that it offers collectors something different, with an excellent value proposition.

To be honest, besides the six watches that we have recommended, there are plenty of watches that an incoming summer intern can consider to reward themselves. These include the usual suspects, but certainly not limited to brands such as Tudor, Seiko, and Longines. There are many offerings out there that feature different styles and different price points. In short, there is definitely something for everyone.

So, what are some of the watches that you have purchased during your internship days? Do you agree with our selections? Let us know in the comments section below!