Ever since the world was introduced to wristwatches, we have seen numerous timepieces that have graced the wrists of many individuals. Some of these watches have become icons.

When it comes to iconic timepieces, some of the watches that come to mind includes the Rolex Submariner, Omega Speedmaster, Jaeger LeCoultre Reverso, and the Cartier Santos. These are timeless watches that have survived the passage of time, with an interesting provenance and/or history behind it as well. In fact, many of such watches have not changed much since it was introduced decades ago.

While these evergreen watches have are definitely icons, there are other watches that have joined the rank over the last few decades as well. Although many of such watches do not have a history that is as deep as the ones that we have mentioned above, we do think that these watches (post-1990s) have made a strong impact in the industry and they will certainly be remembered in the years to come.

So, what are some of the post-1990s watches that we reckon are modern classics in its own rights? Let us find out! 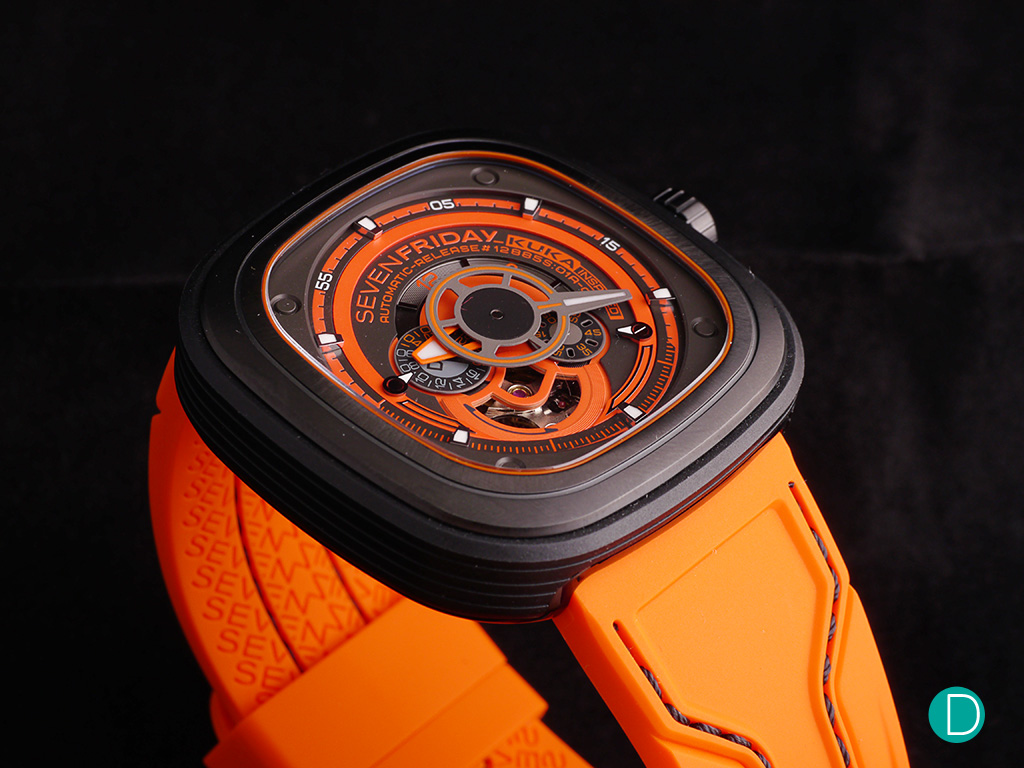 When SEVENFRIDAY first debuted in 2012, it took the industry by surprise. Here, we have a timepiece that not only refuses to conform to design norms, but it was priced aggressively below US$2,000 for most of its offerings. It certainly did very well for the new kid in town.

Over the years, SEVENFRIDAY have continued to inject vibrancy into the scene through new designs, collections, and incorporated more striking colour schemes. The P3/07 Kuka III – made in collaboration with a robotics company named KUKA AG – is an example where the bright orange scheme was used in contrast to the black PVD-coated stainless steel case. The result is a bold, but conversational timepiece.

Priced at US$1,200 (approximately S$1,612), the P3/07 still retains the DNA that makes SEVENFRIDAY so unique and desirable amongst collectors. This is undoubtedly an icon, and one that certainly sets the tone and paved the way for microbrands and watch entrepreneurs in the past decade. NOMOS is a brand that we have often waxed lyrical about. The Glashütte-based watch manufacturer – founded in 1990 – is a perennial favourite of ours for its well-priced watches and minimalistic design. There is certainly more than meets the eye.

Since April 2005, it was noted that all NOMOS timepieces were fitted with in-house movement. This was virtually unheard of for modestly priced watches (except for the larger Japanese manufacturers such as Seiko), as in-house movements are usually reserved for higher-end luxury brands. NOMOS, being a pioneer in this, had certainly proved to the industry that it is possible to offer in-house movement without having the collectors to break the bank. It is also only until recently that we have seen more brands offering in-house movement for watches that are below S$5,000.

The 37.5mm Tangente “Red Dot” 2018, which is a collaboration between the German-based manufacturer and Singapore watch retailer The Hour Glass, is an example of what the brand is capable of achieving. Priced at S$3,200, it offers collectors a decently finished in-house movement with two stunning dial options. It is no wonder that the brand is gaining strong traction with collectors. Bell & Ross, a company founded in 1992, is a watch manufacturer that is known for producing timepieces that were inspired by flight instruments.

The Instruments collection, as the nomenclature suggests, were highlighted by the various flight instruments that are found in an airplane’s cockpit. This includes – but not limited to – the clock, bi-compass, HUD display, and the altimeter. It was certainly refreshing, and one that had garnered a strong following since its inception in the last two decades.

The BR03-92 Full Lum, as seen in the picture above, is one of the latest offerings from the brand. It features an interesting concept, where both the rubber strap and dial are filled with luminescence material. The watch retail at S$5,700, and we reckon it is an interesting watch that further reinforces the cool factor of this manufacturer. The Master Banker was a revolutionary timepiece when it was launched by Franck Muller in 1996. While many timepieces display the second time zone using an additional hand, Franck Muller had gone ahead further by incorporating two sub-dials that displays three time zones with its own hour and minute hands.

The watch became an instant icon, and it was a hit with bankers and traders who had to deal with financial markets in different time zones. This is not withstanding the fact that it is a luxury brand, and that wearing high-end timepiece of such calibre is a sign of wealth and power especially within the financial industry as well. Hence, it became a quintessential item for the financial bigwigs during the late nineties and the early noughties.

More recently, the brand had revamped the collection with a larger case (either at 36mm x 50.4mm, or 39.6mm x 55.4mm) and more vibrant colour combinations. The tonneau-shaped case is still a classic, and the twin sub-dial makes the Master Banker an instantly recognisable timepiece in places where the bankers and traders convene. The new Master Banker 7880 – cased in rose gold – is priced at US$27,000 (approximately S$36,275). This is another excellent piece that deserves a revival. The Aquanaut is a staple in the sports watch category, similar to its brethren – the venerable Nautilus. Launched in 1998, the timepiece is certainly one of the most highly sought-after timepieces in this period as we speak.

One of the latest iterations of the Aquanaut “Jumbo” follows hotly on the heels of the 2017 edition. The original variant – which is notably 2.2mm larger than the popular Reference 5167 – was specially produced to commemorate the collection’s 20th anniversary. The new version, with an olive green dial, adds a nice touch to the timepiece, and the larger size certainly works well as collectors are more receptive to larger timepieces than before. The overall combination works rather well, and it is certainly a great addition to this popular collection.

Powering the Aquanaut is the 213-part, 29-jewel Calibre 324 S C. The self-winding movement has a minimum power reserve of approximately 35 hours, and it incorporates innovations such as the brand’s proprietary Gyromax balance and Spiromax balance spring. The finishing is as per Patek Philippe’s high standards.

The watch retails at S$52,300, and we feel that it is a nice Patek Philippe watch that is a little unusual from the crowd. We certainly like how this one turns out. Finally, we have a timepiece that redefined minimalism. Cue the H. Moser & Cie. Endeavour Perpetual Calendar.

The award-winning Endeavour Perpetual Calendar is a timepiece that is like no other. Besides its clean looks that is an antithesis to the likes of the other perpetual calendar watches, the watch also features innovative functions such as the flash calendar complication (where the date change is instantaneous from 28th/29th/30th/31st to the 1st of the next month). It also boasts a well-finished movement, which has an impressive power reserve of around 7 days as well. It is a timepiece that does so much, but yet speaks to little about itself.

Aside from its functions, the stunning fumé dial is another signature that the brand is known for. The entire package is simply stunning, and we are hard-pressed to think of any timepiece that offers so much in terms of innovation and capabilities. The 40.8mm timepiece is priced at S$83,790, and we think that this watch (and dial) had redefined how we view luxury watches and the art of minimalism.

There are certainly many watches that deserve a spot on the list. Many timepieces have made a strong impact in the industry, and they have certainly changed how we view watches as a whole.

We have also noted how brands are making watches more accessible to the masses. And the best part is that it is done not through compromising on quality – but more on cutting marketing dollars and profit margins. Brands offering in-house movements such as NOMOS are virtually unheard of in the past, and the same goes for funkier mechanical watches such as the SEVENFRIDAY P-Series. Collectors, especially the budding ones, definitely appreciates that.

So, what are your thoughts on our selections today? What are some of the watches that deserves a mention as well? Let us know in the comments section below.