In a few hours’ time, the starting lights at the Autódromo José Carlos Pace in Brazil go off, and kick starting one of the most highly-anticipated races of the year. The Brazilian Grand Prix is often one of the highlights of the season, as it was usually the last race on the calendar itself. It was, also, where most of the champions were crowned. This was until the Abu Dhabi Grand Prix came into the picture.

On a side note, for fans of Formula 1, this is also the final time Felipe Massa will race in front of his fellow countrymen. The 36-year-old driver had an illustrious career that spanned over 15 years, racing with Ferrari, Sauber, and Williams. While he may not be the most popular driver, but Felipe had certainly left a great impression for people (like the author) who started following Formula 1 in the mid-2000s.

Moving back, we thought that it will be interesting to highlight six chronographs with a racing pedigree this weekend. After all, chronographs and racing are often synonymous. Take Paul Newman and Steve McQueen for example. These two individuals are well regarded personalities, with a keen interest in racing. They are also often associated with certain timepieces, like the Rolex Cosmograph Daytona and the Heuer Monaco. In fact, the Paul Newman Daytona is so highly collectable amongst collectors that prices for that watch had went up tremendously over the last few years.

So, with that in mind, what are the six chronographs that we have chosen today? Let’s find out! When it comes to racing, TAG Heuer is probably one of the most recognised watch manufacturers to be associated with it. After all, most of their watches are inspired by motor racing, and it is apparent from the names of their watch collections as well. For instance, Monza, Monaco, and Silverstone were names of famous race tracks, and they were coincidentally the names for some of the collections in TAG Heuer’s repertoire.

While the Monaco, with its association with Steve McQueen, is one of the most popular watches, but we feel that we should highlight another interesting piece from the brand: the Monza. The timepiece, which was first launched in 1975, was a special watch that was specially created to commemorate Niki Lauda’s first world championship title with Ferrari. The rest, as they say, is history.

Featuring an uncommon coussin case, the Monza was actually inspired by a timepiece in 1925. The new watch, launched in Baselworld last year, comes with some nice touches. This includes the pulsometer and tachymeter scale, an all-black PVD case, as well as original fonts and markings on the dial. The watch is fitted with the Calibre 17, which is an automatic movement based on the ETA 2894.

The watch is priced at US$5,250 (approximately S$7,140), and we would say that this is probably one of our favourite reissues from TAG Heuer. Definitely a worthy piece to collect, especially if you are a big fan of motor sports during its heydays in the 60s and 70s. The Speedmaster Racing is a tad different from the usual “Moonwatch”. Pretty cool piece, in our opinion.

The Speedmaster is often associated with NASA, and it is not a surprise. After all, the “Moonwatch” is often touted as the first watch worn on the moon, and it was used for many other manned space missions.

However, casting that association aside, the Speedmaster was originally produced as a sports and racing chronograph. That is apparent in its name, as well as the tachymeter bezel that appears on most of the Speedmasters that were produced. Interestingly, in 1968, it was rumoured that Omega had produce a “racing dial” model for the Speedmaster. The “racing dial” is often featured with bi-colour minute markers, alternating between each marker. This layout was most famously seen in the Speedmaster Mark II from the 1970s, before reappearing again in 2004.

In Baselworld 2017, Omega announced the launch of a new series of the Speedmaster, dubbed the Speedmaster Racing. In the initial run, the collection features two different models, one in 18K Sedna Gold, and the other in stainless steel. The latter pays homage to the original “racing dial” model, featuring the alternating minute tracks, as well as the conspicuous orange hands. In addition, the watch is paired with a perforated racing strap.

Priced at S$11,700 for the basic variant, the Speedmaster Racing is slightly more expensive as compared to the Moonwatch. However, this 44.5mm watch is fitted with an automatic Master Co-Axial C.9900 movement, which is decently finished and highly accurate in timekeeping. It is certainly worth a look, especially if you are looking for a Speedmaster than is slightly different from the rest of the crowd. 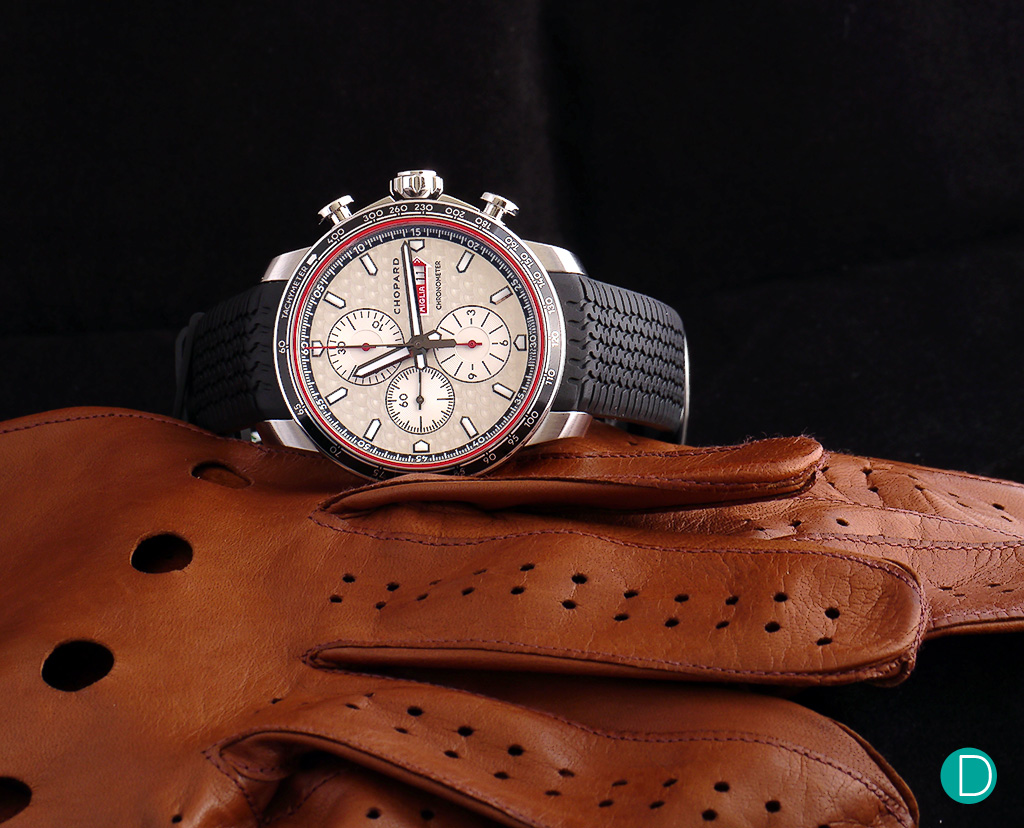 Chopard’s Mille Miglia collection, launched in 1988, was born out of Karl-Friedrich Scheufele’s love for motor sports and classic cars in general. The name, incidentally, is a nod to the historical open-road endurance race that took place between 1927 to 1957. Chopard has been a sponsor and the official timekeeper for the revived version of the Mille Miglia, and they have been producing a special timepiece for each edition of this racing event ever since.

The 2017 version, which first made its debut in Baselworld earlier this year, is slightly different from its predecessors. For this timepiece, Chopard had incorporated design cues from vintage cars, featuring elements such as car engines, fuel caps, and dashboard. The 44mm timepiece is fitted with an automatic chronometer-certified movement, with a power reserve of around 48 hours. Its functions include a chronograph, as well as a date indicator.

The Mille Miglia 2017 Race Edition is a nicely designed sports watch, with elements that will appeal to car enthusiasts highly. Only 1,000 examples of this timepiece will be produced, with a price tag of S$6,840. The watches will also be fitted with the iconic rubber strap, with the 1960s Dunlop racing tire-tread motif that complements the theme of the watch beautifully. Being the official timekeeper for Formula 1, Rolex had certainly cemented its spot in the world of motor sports. However, long before that, the brand had made its first foray into automotive world, with the Cosmograph Daytona.

Initially, the Daytona was a complete commercial failure. The timepiece was poorly received back in the 60s and 70s, as consumers preferred the likes of Datejusts and the Submariners. In fact, it was quite a common sight to see a Daytona lying on the display shelves for months (or even years). It was only back in the early 1990s where the collection saw a resurgence, which had subsequently lead to its popularity all the way till this date.

The latest model from the collection is none other than the Reference 116500LN, launched in last year’s Baselworld. The timepiece is pretty much similar to its predecessor, sans a few cosmetic and mechanical updates. The most obvious one would be the bezel, in which the new iterations are fitted with a ceramic one. In terms of the movement, the watch is still powered by the Calibre 4130, although it is now adjusted to an accuracy of -2/+2 seconds per day.

The Daytona is well-priced at S$16,660, but it is said to have an excruciating long waiting list for this model. Well, as the adage goes: all good things are certainly worth waiting for. Bell and Ross is a brand that is known to produce watches that are inspired by flight instruments, and therefore we were interesting to see their offerings when they became the official watch partner of the Renault Sport F1 Team in 2016. The BR03-94 RS17 is one of the pieces from the trilogy, and we were certainly impressed by it.

The watch, which is fitted with the iconic Bell and Ross’s square case, pays homage to the Renault RS17 F1 car. The design and the colour scheme were based on the steering wheel of the race car, which makes the entire piece rather vibrant and refreshing. In addition, the carbon fibre dial also adds a nice touch to the watch.

Fitted with a special 42mm ceramic composite case and a rubber strap, the BR03-94 RS17 is a certainly a sporty and stylish timepiece. In addition, the watch is powered by an ETA2894-2 base movement, with a 40-hour power reserve. It is priced at S$9,000, and its production will be limited to just 500 pieces. The Richard Mille RM50 is the currently the world’s lightest split-second chronograph, weighing in at 40 grams, including strap.

Finally, we round up the article with something remarkably cool. Cue the Richard Mille RM50-03 Tourbillon Split Seconds Chronograph Ultralight McLaren F1.

Richard Mille is definitely an intriguing brand, most well-known for its outrageous price tags and incredible designs (as well as materials). The watch manufacturer is constantly going all out to improve and innovate, using cutting-edge materials to produce a robust, yet ultra-lightweight watches. Oh yes, and don’t forget about complications too.

The new RM50-03, as its name suggests, is a highly complicated timepiece. The watch is fitted with a skeleton dial, featuring an array of indicators.  This includes the chronograph display, a power reserve indicator, a crown function display, as well as mainspring torque gauge. In addition, it has a split-second chronograph, as well as a tourbillon.

In order to keep the RM50-03 light, Richard Mille had used a combination of titanium and Graph TPT in its construction. The material is said to be six times lighter, and 200 times stronger than conventional steel. Interestingly, the movement is also produced using the same movement, and yet it is capable of withstanding shocks of up to 5,000G. Incredible!

Cars and watches are synonymous with each other, no doubts about that. There is always this saying that the 4 Ws in a man’s life are: watches, wheels, whiskey, and w_____. We shall leave the last one out for you to interpret!

Even though there are many watches that are inspired by cars, but it is also interesting to see that the results are rather different. On one hand, we have the conservatively designed ones, like the Chopard Mille Miglia or the Rolex Cosmograph Daytona. On the other hand, we have the unconventional and bolder ones, such as the Richard Mille RM50-03 or the Bell and Ross BR03-94 RS17. The latter certainly adds more vibrancy into any collection, although its target audience might be slightly more niche. This is even more so if the prices are astronomical.

So, what are your thoughts on our selection today? What are the watches that should have made it to the article today? Let us know in the comments section below!