The Moser Streamliner Center Seconds was announced in August 26, 2020 as the second model in Moser’s entry into the bewildering world of the stainless steel luxury sports watch with integrated bracelet. We get up close and hands-on with the new watch, and give you our thoughts.

As we discussed in our commentary in the release article, the introduction of a second model in the Streamliner lineup is impressive indeed, particularly so for a small company like H. Moser.

Compared to the Chronograph, the dial of the Centre Seconds is of course, cleaner and simpler, but the fireworks is in the magnificent green fumé with the brilliant glint of the sunburst pattern. As explained in the Photo Notes section at the end of the article, this bright glint is only visible at certain angles, and does not show up as prominently in our photographs. Unless we chose to add it in during post processing of the photographs.

The case retains the same basic shape as the Stramliner Flyback Chronograph, but in a slightly smaller diameter measuring 40mm instead of the chronograph’s 42.3mm. The proportions are exactly the same as each other, and without the benefit of a side by side comparison, one is hard pressed to know which is larger. The shape, and detailing on the case is exactly the same, proportionally shrunk. This includes the brushed bezel which provides a beautiful counterpoint to the polished bevel of the bezel.  As well as the scalloped sides of the case. The same magnificently beautiful, sculptured bracelet is installed. The bracelet is reminiscent of the Ebel Waves, and extends out from the watch head like scales of a anaconda. The bracelet is smooth to the touch and with each link shaped in a complex, organic form. The surface is brushed, but as it flexes, one gets a glimpse of the polished insides. As mentioned in our Streamliner Chronograph article – very attractive. Instead of the launch Chronograph’s brushed dial, which we found to be very attractive, the Center Seconds sports a rather more conventional (but only conventional for Moser!) Matrix Green fumé with sunburst pattern. The pattern is only visible when it catches bright light incident to the dial at certain angles. As discussed in the Photo Notes section at the end of this article, our photographs manage to capture the green hue correctly, but without the bright reflections, we are unable to show the specular highlights  which make the dial special.

The hour markers are bar shaped appliques, with a large double bar at 12 o’clock. The minute track is indicated also as white lines, further sub-divided into 1/3s. The hands are large, made to support excellent legibility. The hands are formed in two sections and feature inserts made from Globolight®, an innovative ceramic-based material which contains Super-LumiNova®. The minute and second hands are curved at the end to reduce parallax error.

On the whole, the dial is un-fussy, very clean looking. And very attractive.

The movement is the manufacture HMC 200. Quite a beautiful movement with a large, well decorated rotor offering a nice contrast to the rhoduim plated plates with the double wave design, known as Moser Stripes. The movement is not new, but already tested and proven in other Moser models, like the Endeavour Centre Seconds and Pioneer Centre Seconds. The movement finishing is excellent, with all the usual haute horlogerie details executed very well.  Of note is the escapement system which is manufactured in the same facility in Schaffhausen by Moser’s sister company – Precision Engineering. The Original Straumann Hairspring® is made in-house, and is mounted on a balance wheel which is also a product of the same facility. The balance is mounted as a removable unit by a bridge which is attached by two screws. This permits the entire balance to be adjusted in-factory, and Moser is able to offer a quick turnaround for field replacements. At S$33,000, the Moser Streamliner Center Seconds is priced rather competitively, placing it right smack in the middle of the pack in the Competitive Landscape. A very noble list, capped at the top with the industry leader Patek Philippe Nautilus Ref. 5711 (S$40.400) and the genre’s originator Audemars Piguet Royal Oak Self Winding Ref. 15500ST.OO.1220ST.0 (S$30.300). The same landscape also feature other high end maisons like genre newcomer – the A. Lange & Söhne Odysseus (S$40.700) and theChopard Alpine Eagle (S$17,200).  And also old time favourites like the Vacheron Constantin Overseas (S$30,800). Or perhaps from an outfield, the Czapek Antartique at CHF18,000, about S$26,700. 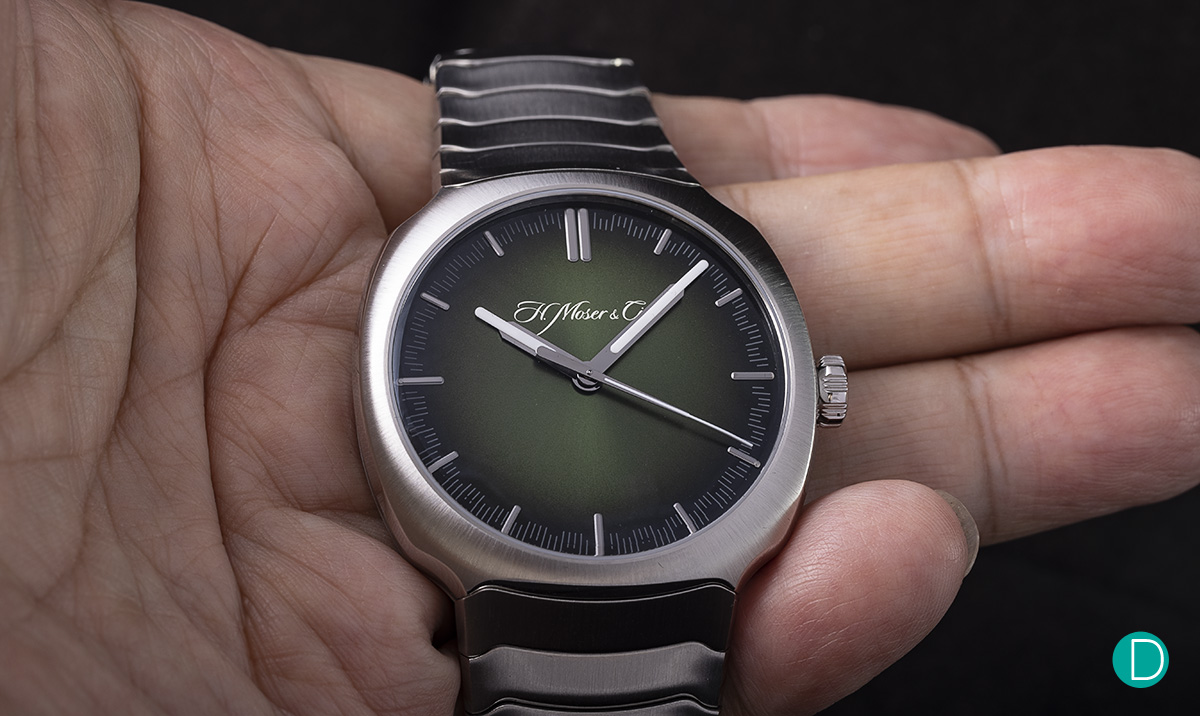 The Nautilus is almost impossible for regular collectors to buy at full retail. But the others are not particularly difficult to procure. And among this august company, one can hardly make a poor choice. Which one is chosen is a matter of personal taste. We highly recommend you seek out the watches to see and handle in person, and make your decision after.

In conclusion, the Moser Streamliner Centre Seconds is a beautiful piece of work by the Meylans. The watch is well thought out, beautifully executed, and reasonably priced. Photo Notes: Photographed with the Canon EOS R6 with EF 100mm f/2.8 L IS USM using the Canon EF to RF Mount Adapter. The colours as shown in the photographs are true to the eye, but the reflective nature of the dial is such that it is highly dependent on the angle of lighting incident on it. As is best practice for studio strobe photography, the key light and rim light are both firing from the side of the watch. This is done specifically to avoid the flash light catching the dial and making a hot spot. However, to the naked eye, the dial does have a bright green conically shaped streak across the dial, as shown in the press photograph below, which is taken under bright sunlight. We chose not to add this bright glint in post processing. The glint in the dial is somewhat what it looks like to the naked eye, but in this Moser supplied photograph, the watch is under very harsh sunlight.