A. Lange & Söhne and moon phases. It’s always A. Lange & Söhne and moon phases! Why do they do it so damn well? So much so that I had to get one for myself. Two years ago, I made the choice to acquire the Grand Lange 1 Moon Phase, in yellow gold no less. Today, it remains my go to watch when I’m not wearing my beater. Let’s be frank, the Grand Lange 1 Moon Phase isn’t the most popular in the Lange collection, but I genuinely think it is one of the most amazing timepieces at its price point. 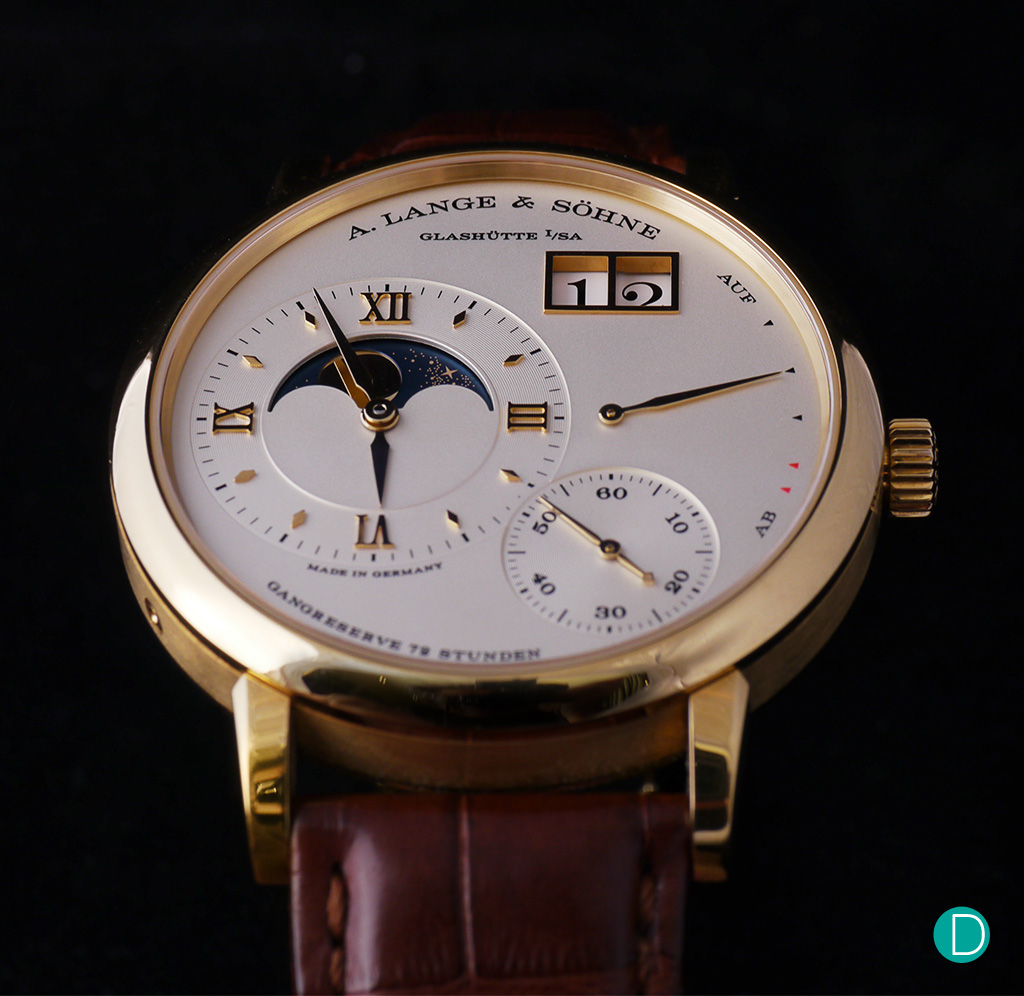 The case of the Grand Lange 1 Moon Phase measures a contemporary 41 mm in diameter and 9.5 mm in thickness. At these dimensions, the watch suits current size preferences while still maintaining a svelte dress profile. The case is Lange standard issue, with a polished bezel, brushed case band, and bevelled screw-in lugs. It is worth noting though, that the bezel and spacing between the lugs (and hence strap width) are relatively narrower versus case diameter than in the ‘non-Grande’ Lange 1s, which contributes to the watch’s elegance. The brushed band and polished bezel provide stunning contrast to the case.

The main attraction of the watch is indeed its dial, which is crafted from solid silver and has a subtle but warm champagne hue. The dial displays conform to the now-iconic, asymmetrical layout of the original Lange 1, where the centres of the seconds sub-dial, main dial and outsize date are at the corners of an imaginary isosceles triangle. Respecting the rule of the golden ratio ensures that the asymmetrical dial design is executed with harmony and balance. Both the sub-dial and the main dial feature fine concentric guilloché which interacts playfully with direct light and is satisfying to view under a loupe.

The moon phase display has been moved from its usual spot in the subsidiary seconds dial to take centre stage within the main dial. Naturally, the moon phase aperture and disc have been resized to fit in its new habitat, becoming much larger. Those familiar with the various brands residing in the upper echelon of watchmaking will know that A. Lange & Söhne makes one of, if not the best moon phase discs in the high-end market, period. The solid gold moon phase disc is treated with a patented coating process which is responsible for the rich colour saturation and crisp details on the disc. It eliminates all non-blue colour spectra in the incident light – the result: an intensely blue surface on which the 382 laser-etched stars stand out. The moon phase display that dwells in the main dial adds a striking pop of colour to the dial.

Beating inside the Grand Lange 1 Moon Phase is the 446-part, 45-jewel, in-house manufactured Calibre L095.3. The Calibre L095.3 has a power reserve of 72 hours while operating at a stately 3 Hz beat rate. It its equipped with three complications: the outsized date which, unlike the one in the new Lange 1, doesn’t jump instantaneously; the power reserve indicator, which is displayed on the dial; and the perpetual moon phase indicator, which is continuously driven by the hour-wheel continuum and accurate to one day every 122.6 years. The Calibre L095.3 has a traditional three-quarter plate architecture and is rendered in German silver. It features the usual superlative finishing and decorations found on any Lange: creamy Glashütte ribbing, screwed-down gold chatons, black-polished swan neck regulator, and hand-engraved balance cock, to name a few. To hide the movement’s beauty would be a crime – fortunately, it can be viewed through a sapphire crystal caseback. A closer look at the movement reveals how remarkably well-finished the Calibre L095.3 is. My favourite bits are the highly textured ribbing on the plate, the perfectly polished chamfers, the black polished swan neck regulator and of course, the hand-engraved balance cock.

Why I chose the watch You might also be wondering why I had chosen the yellow gold version of the watch. Yellow gold as a material has fallen so far out of favour in this day and age that even Lange’s been phasing out the production of pieces in this most classic of metals. I had two main reasons: 1) the contrast between the colour of yellow gold and the blue of the moon phase disc looked the most stunning and, 2) I wanted a version of the watch that most people don’t have – platinum and especially pink gold were too common by comparison. I was also a big fan of the champagne coloured dial, which goes really well with yellow gold, in my opinion. When used judiciously, yellow gold is tasteful and incredibly beguiling. The paired light brown strap adds to the flair of the watch.

On the wrist – my personal experience

The Grand Lange 1 Moon Phase sits very comfortably on the wrist. With a 41 mm case, it has great wrist presence and yet is not oversized (for today’s standards). Its sub-10 mm thickness enables it to slide under a tight sleeve or dress cuff with ease. The watch has a nice heft to it (as do most Lange watches) but does not encumber the wearer. On the wrist: the Grand Lange 1 Moon Phase in yellow gold

My favourite part of the watch has to be the moon phase display (surprise, surprise). Often times, I find myself staring at it for longer than what the general public would consider ‘normal behaviour’. Sometimes, I inadvertently put my life at risk by admiring its resplendence while crossing a road. There are also times when I intended to read the time but then forgetting to do so after being distracted by the moon phase display. The phases of the moon may be a ‘useless’ complication but it is indubitably the most poetic and romantic of them all – gazing into it lets me escape reality, even if just for a brief moment. That romance and poetry is heightened in the Grand Lange 1 Moon Phase as the disc is larger than is typical. Couple that with the striking contrast of polished yellow gold on luscious night blue and you have a work of art that rivals even the real night sky. I love that the four-point star is used in the Grand Lange 1 Moon Phase. The five-point star used to adorn every other Lange moon phase disc appears somewhat cartoonish. That said, I wouldn’t kick any Lange watch out of bed – ever.

Apart from the moon phase, there are also the other elements of the dial. Everything is positioned in a satisfying manner relative to one another, even the ‘Made in Germany’ and ‘Gangreserve 72 Stunden’ script that is used to fill negative space on the dial. I love how multiple planes exist on the dial, giving it a real sense of depth. Even the applied diamond markers and Roman numerals, in all their shimmering splendour, contribute to the perceived depth of the dial.

It also goes without saying that the view of the case back is equally breathtaking. I neglected to mention this, but another factor that drove me to buy Lange was the aesthetics of its movements. Save a handful of high-end independent manufacturers, nobody comes anywhere near the level of craftsmanship devoted by Lange to its movements. Each Lange movement is a masterpiece in itself and the Calibre L095.3 is no exception. With regards to the architecture of the Calibre L095.3, while some may feel that the three-quarter plate obstructs the view of the rest of the movement, I see it as an ode to traditional German watchmaking. There are many brands out there that love showing off their watch movements via exhibition case back but fail to design or finish them to a standard fit for viewing – thankfully, Lange isn’t one of these brands. Another view of the Calibre L095.3. Not a single millimetre is unfinished, including the unseen parts.

While the Grand Lange 1 Moon Phase is damn well a gorgeous watch, I suppose I could think of a thing or two that I personally wish were different. Firstly, I feel that the two red power reserve markers (next to the ‘AB’ text) should just be black like the rest. I can understand that the use of red is meant to serve as a warning that the power reserve is on its last legs but it just goes against the vibe of the dial. The pop of red looks too jarring for a watch that has very dressy aesthetics and is neither sporty nor casual. Secondly, I am a fan of ‘overbuilt’ Lange watches but the Grand Lange 1 series of watches is perhaps the least ‘overbuilt’ of them all. The Grand Lange 1 Moon Phase is indeed meant to be elegant, but I think I actually prefer the chunkier proportions of, say, the Lange 1, the Lange 1 Time Zone or the Zeitwerk. I wouldn’t expect Lange to make a thicker case just for the sake of it, but I think a broader bezel, a more substantial set of lugs, and wider straps would look just as nice on the Grand Lange 1 Moon Phase – the watch would end up less elegant, but definitely more masculine and ‘German’. The broader bezel, the more substantial lugs, as well as the wider strap of the Lange 1 Time Zone appeals to me strongly. This is a watch that is both masculine and elegant at the same time.

There’s also the matter of negative space on the dial, though it’s mostly a non-issue. The idea of the Grand Lange 1 is simply to be a larger Lange 1, one with a more contemporary size. A new movement was designed specifically to fit the larger case so that all elements on the dial could be proportionally enlarged, with the golden ratio maintained. This also means that negative space on the dial is enlarged, albeit proportionally. Comparatively, the smaller 38.5 mm Lange 1 would appear to have less unused space on its dial – for me, that is a more cohesive look.

All in all, these ‘downsides’ of the Grand Lange 1 Moon Phase are extremely minor and purely stem from my personal taste and my best nitpicking efforts. The watch honestly has no fundamental flaws. The original Lange 1, compared to the Grand Lange 1 Moon Phase, has seemingly less negative space even though said negative space occupies the same percentage of dial real estate. Note as well, the relatively more substantial bezel and lugs of the Lange 1.

Ever since it was first strapped onto my wrist, the Grand Lange 1 Moon Phase remains my go-to dress watch. Now with two years worth of hindsight, would I have bought a different watch given the same budget? Probably not, though I have flirted with the possibility of choosing the Jaeger-LeCoultre Duomètre Quantième Lunaire instead. As a lover of poetic complications and a huge craftsmanship fiend, my appreciation for the Grand Lange 1 Moon Phase is insurmountable. Dare I say, the day I stop finding it attractive would be the day I cease to exist. Every table at this year’s Lange Friends’ Dinner (held on January 17) was adorned with one of Lange’s moon phase discs. Pictured is the one that is equipped into the Grand Lange 1 Moon Phase.