By now, you should of course be familiar with a timepiece’s potent ability to be both an extension of your personality and a projection of the inner machinations of your Id and Super Ego. Though both founding father of psychoanalysis Sigmund Freud and his theories generate extensive controversy and debate as to their efficacy in deciding the human condition, his works have nonetheless been embraced by popular culture, often hinting at the myriad of influences with which our inner selves react and respond to daily living. How does this relate to our choice of wristwatches?

Let’s face it. From a technical, artistic and ego perspective, timepieces by their very nature are great equalisers of men and potent, albeit unscientific, evidence lending credence to Freud’s foundational work in the human psyche. Allow me to elucidate – brands like Grand Seiko, through no technical or artisanal disadvantage of their own, suffer from the obvious snob-factor of not being Swiss-made. In turn, the brand name itself dissuades potential buyers from embracing what happens to be a prime example of the Japanese philosophy of Kaizen (pursuit of perfection), simply because they happen to be producing rather basic and entry level Seiko 5s. Yet at the very same stroke, you don’t see collectors tarring Rolex with the same brush just because they produce entry level Airkings. Any decision made on these grounds simply reflects on the base desire for social recognition and acknowledgement, regardless of any rational grounds for a product’s actual versus perceived quality.

The House of Cards is an excellent, if fictional, representation of these inner psyches in action. They may be characters acting out a script but the costume designers and wardrobe assistants are flesh and bone, dressing each character according to their roles and motivations. The watches from the House of Cards allow us a magnified glimpse into the power and perception of specific characters and the roles they play within the legislative and executive branches of the world’s sole remaining superpower.

Played by Kevin Spacey, Frank Underwood is a member of the US House of Representatives from South Carolina’s 5th congressional district. As Democrat House Majority Whip – his power and influence comes from his ability to project varying degrees of soft power and fear into “whipping” the votes needed to pass the President’s most important bills in a Congress that is often “choked with pettiness and lassitude”- his job is to “clear the pipes and keep the sludge moving”. His timepiece(s) of choice: IWC.

As espoused previously, IWC presents the sort of brand that is nascent and two steps left of being an outright “luxury” watch. It is the paragon of determination; an apt reflection of the hard striving locals within German-speaking Swiss Schaffhausen. From a brand perspective, though Spacey is considered a “friend of the brand” due to his patronage of (rather than being sponsored by) the brand, IWC is fitting for Underwood and it shows. Underwood may play politics, but though he is Machiavellian in nature, he never shies from hard work. For him, the ends justify the means, and from IWC’s perspective, it means one of the harshest quality control tests in the industry and a guarantee of well-built, robust timepieces for the man who works to the bone and reaps his rewards later. As a political operator, Underwood’s hard pragmatism echoes IWC’s ethos of dependable, functional, well-crafted watches for the working professional. In short, it’s not the brand for moneyed dandies. Born July 1962, President Garrett Walker is the 45th President of the United States, continuing a run of Democrat presidents in the White House following Obama’s two terms in office. The former Governor of Colorado is politically savvy and more importantly, receives the popular mandate of the American people, garnering 70 million votes in the Presidential elections.

Ambitious and focusing on the bread and butter issue of providing education for the people during his first 100 days in office, Walker proves to be a trusting and caring gentlemen, much to his detriment, as we soon come to realise when Underwood manoeuvres himself into the Vice-Presidency, essentially installing himself as next in line of Presidential Succession. 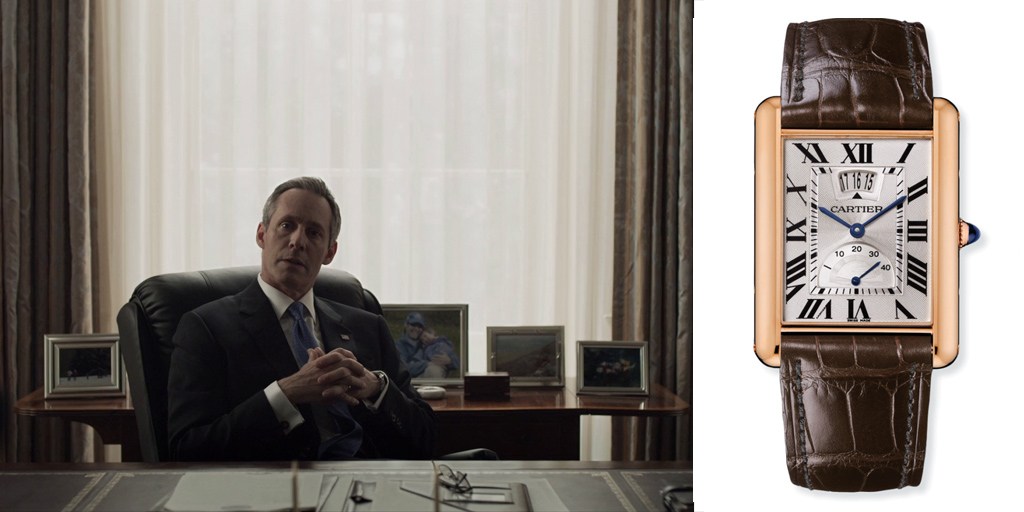 Wearing a Tank Louis Cartier XL during his inauguration as the 45th President of the United States following Obama, he would set the tone for a benign left-centrist government, electing to drop Secretary-nominee Kern after a series of gaffes over statements concerning Israel and Palestine.

For day to day meetings, Walker depends on the aggressively styled Calibre de Cartier; a suitable choice considering how you need to project strength as the “most powerful man in the world”. A Tank Louis Cartier XL would be too elegant and refined, and as they say, “respect is an equal measure of fear and love”; a magnum of that Calibre suffices. 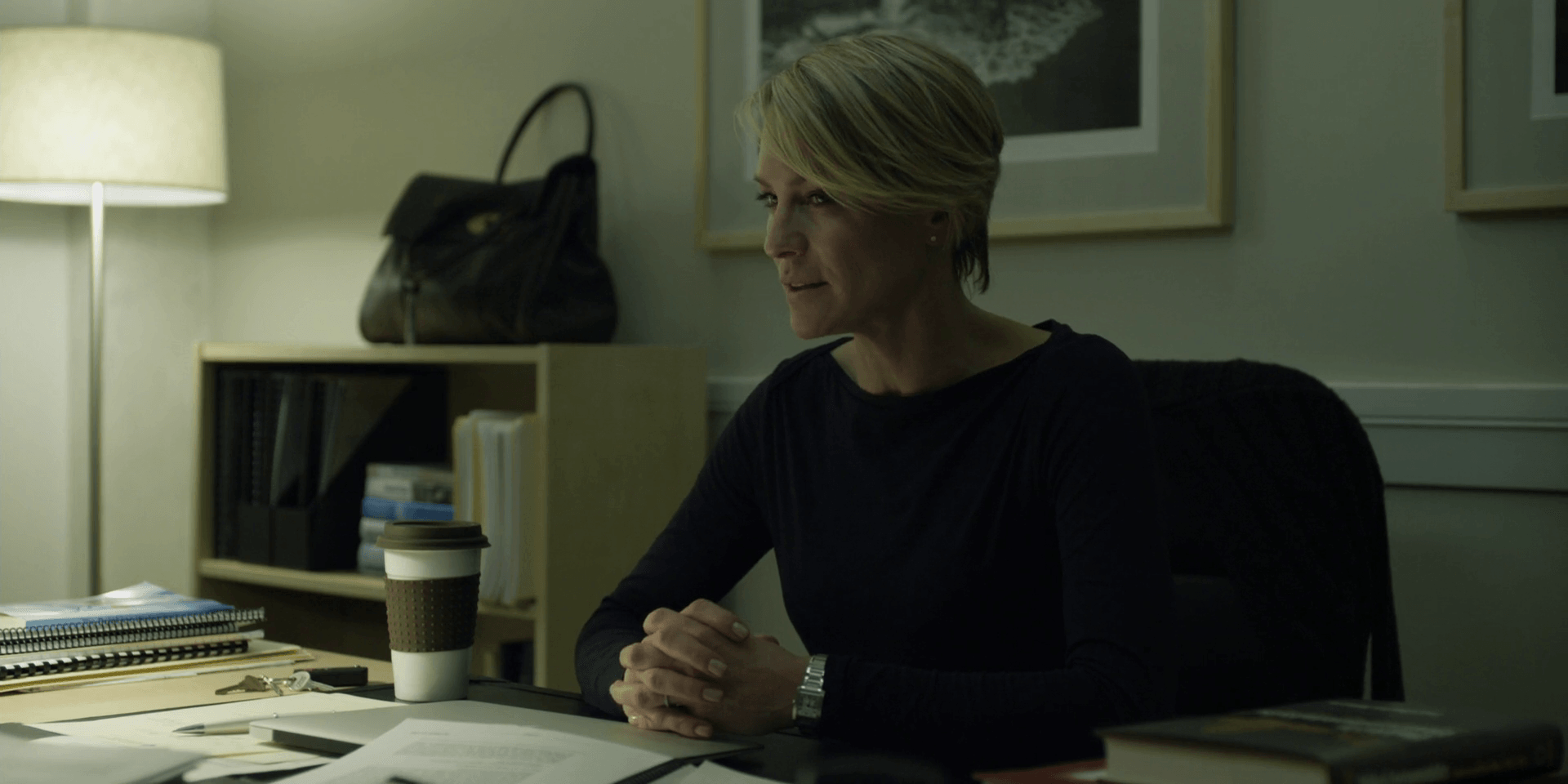 Mrs. Claire Underwood wears a small Cartier Tank Francaise. While as pragmatic as her husband, Claire exhibits a fragile emotionality which belies her strength (even when it’s a façade). As the saying goes, behind every successful man is a woman. Claire is THE woman and for her the ultimate ladies’ timepiece – aesthetically demure, yet a capable counterpart for the woman who can play the hard game without losing her femininity.

A former protégé of Frank Underwood, Remy Danton is a partner at Glendon Hill. At the law firm, he handles the accounts of SanCorp, serving as a lobbyist. On his wrist, a TAG Heuer Monaco – an analogous symbol of this maverick lobbyist, especially when he shows rebellious Steve McQueen tendencies after he realises he has fallen for new Majority Whip, Jacqueline Sharp, and abandons his political masters for his own moral compass: pointing in the direction of protection for the woman he loves. Peter Russo and his Rolex Congressman Peter Russo wears a Rolex Sea Dweller, recognisable from the usual Submariner because of the way it dominates his wrist. A Rolex is the choice of a man who knows he has certain achievements and celebrates it with the world’s most highly recognised Crown.