With SIHH 2017 looming, Vacheron Constantin delivers an incredible statement of high horology in the form of  an extraordinary striking watch, the Vacheron Constantin Traditionnelle minute repeater tourbillon. This delicately crafted model is adds one of watchmaking’s most lauded complications to the Traditionnelle line, an art inherited from the finest 18th century traditions when the lack of lumination (super or electrical) necessitated the formulation of chiming mechanisms which could “repeat time” audibly. A new in-house Calibre 2755 TMR – unites two major horological complications: the minute repeater and the tourbillon; encases them in pink gold or platinum versions, all certified by the prestigious Hallmark of Geneva, one of the highest standards of Swiss watchmaking criteria and a hallmark (pun intended) of craftsmanship and reliability. The 6 o’clock opening of the SIHH 2017 Traditionelle Minute Repeater Tourbillon provides a chance to admire the stately dance of the tourbillon, which is all the more entrancing in that the caliber beats at the low frequency of 2.5 Hz, a speed characteristic of traditional watchmaking

The new Vacheron Constantin Traditionnelle minute repeater tourbillon for SIHH 2017 is exemplary of the technical and aesthetic sophistication which permeates each and every timepiece from Vacheron Constantin. The maison made its first minute repeater in pocket-watch form in 1812 but when the invention of safety matches in 1845, made it easy (and well, safe) to light candles during the hours of dusk as well as the discovery of electricity towards the end of the 19th century relegated repeaters to the most rarefied of time-keeping instruments with skills preserved only by the most respected of names. In the intervening decades, Vacheron continued to join striking mechanisms with other complications, eventually creating its first wristwatch minute repeater in 1930.

“We endeavour to make attractive guilloche examples so that they are appealing, to get the greatest reliability… and make the pieces in our name with light cases for those who want them without their becoming too expensive.” – Mr. Constantin expressing satisfaction and direction for the maison’s repeating watch manufacture on Oct 1819

For the new calibre 2755 TMR, produced and completely developed by Vacheron Constantin, a tourbillon, the most mesmerising of complications, joins the symphony of minute repeating; combining two consummate high-crafts. The new Caliber 2755 TMR combines a minute repeater mechanism striking on demand with a tourbillon. The 58-hour power-reserve indication – with its pink gold pointer whose colour is achieved by a black oxide process – placed on the back of the watch.

In crafting special timepieces hitting the right chord between technical and aesthetic considerations, the new Traditionnelle minute repeater tourbillon for SIHH 2017 emphasizes the expertise of the manufacture. The dial comes in slate grey or silver -toned versions on the platinum versions; and is silver-toned for the pink gold version. It is engraved with a refined hand-guilloché motif earmarked for timepieces only accessible from Vacheron Constantin boutiques. This exceptional pattern represents the inventiveness of the Maison and its command of guilloché work – a delicate traditional ability applied to watchmaking from the 18th century onwards. Available in white or pink gold, both of the new Patrimony moon phase and retrograde date watches share silvered opaline dial, subtly raised around the rim, features tapered applied hour-markers in pink or white gold depending on the versions, as well as a circular “pearl” minute-track.

The new SIHH 2017 275-part Manufacture Vacheron Constantin Caliber 2460 R31L with its 40-hour power reserve drives the hours and minutes hands, the retrograde date as well as the precision moon-phase display.

Appearing on a pink or white gold disc depending on the variation, the moon casts an almost incandescent glow against a star-studded backdrop, observable through an opening in the lower half of the dial. The age of the moon – that is to say – number of days that have elapsed since the last new moon – can be read off on a graduated scale around this aperture, displayed precisely in accordance with the actual lunar cycle lasting exactly 29 days, 12 hours and 45 minutes. On the upper half, the retrograde date indicator is graduated in arc form from 1 to 31, all the possible days in a month.

Resurrected in 2004, Patrimony collection epitomises stylistic purity, inspired by classically styled models from the 1950s and the new SIHH 2017 Vacheron Constantin Moon phase and retrograde date carries on the tradition of clean lines, austere while luxurious beauty and reliability.

Equipped with a manufacture movement Calibre 2460 R31L with its 40-hour power reserve , the new Patrimony moon phase and retrograde date for SIHH 2017 is also certified by the prestigious Hallmark of Geneva. Its excellent engineering extends to user friendliness with a single crown adjusting all three functions of the watch – time, date and moon display. In its first position, it serves to wind the watch. Once pulled out to the second notch, it can be turned clockwise to set the date or counter-clockwise to adjust the moon phase, while the third and last position controls time-setting. With this unprecedented movement, the Maison has succeeded in offering an easily adjustable mechanism. A transparent sapphire crystal reveals the 2460 R31L movement and its 22K gold oscillating weight, adorned with Vacheron Constantin’s signature Maltese cross motif.

Despite the two dial-side complications, the latest in the Patrimony series, debuting at SIHH 2017, is harmoniously proportioned to a dressy, minimalist aesthetic.  The case itself is understated and available in in white gold and pink gold variants. 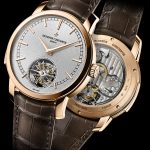 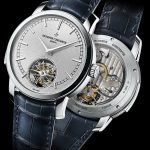 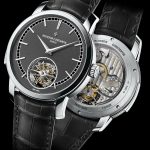 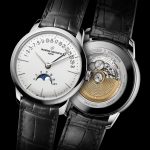 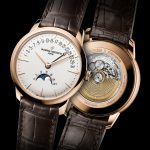