We are thrilled to bring you our detailed, hands-on review of the new Vacheron Constantin Overseas Chronograph 5500V. This watch is our pick from the newly refreshed Overseas collection. The VC Overseas press release is found here, and is recommended reading as prerequisite for this analytical review. It is no secret that this is our pick from the very beautiful VC Overseas crop. There is no two ways about it. We love the looks, especially the stainless steel model with the amazing lacquered blue dial. We love the way the bracelet/straps can be easily exchanged, brilliant system. And we love the new caliber 5200 column wheel chronograph with a vertical clutch system. In short, we love it!

The design inspiration is taken from the original VC 222. The 222 was designed by Jorg Hysek in 1977 to celebrate VC’s 222th Anniversary, and intended to compete with Gerald Genta’s designs for Patek Philippe (The Nautilus) and Audemars Piguet (the original Royal Oak). The series is often erroneously attributed to Genta, but this is a true Hysek masterpiece. VC ran the 222 for only 500 pieces in stainless steel, 120 in stainless steel and gold and only 100 pieces in gold.

The Overseas line only began in 1996 when the collection was launched under that name. The first chronograph was the VC Ref. 49140, which was produced till 2004, when it was replaced by the Ref. 49150. Both were powered by the VC 1137, which is a chronograph movement based on the F. Piguet 1185. The caliber 1137 is a very advanced vertical clutch column wheel chronograph, and is nicely decorated. And in the 49140 and 49150, features a soft iron cage to provide high anti-magnetism protection up to 25,000 A/m. Water resistance is rated at 150m, making the robust package a rather sporty, daily use watch. This newest iteration, now VC Ref 5500V was announced in SIHH2015. The watch is offered in two versions in a stainless steel case and in 18k pink gold. The basic design language remains largely the same as in the earlier references. 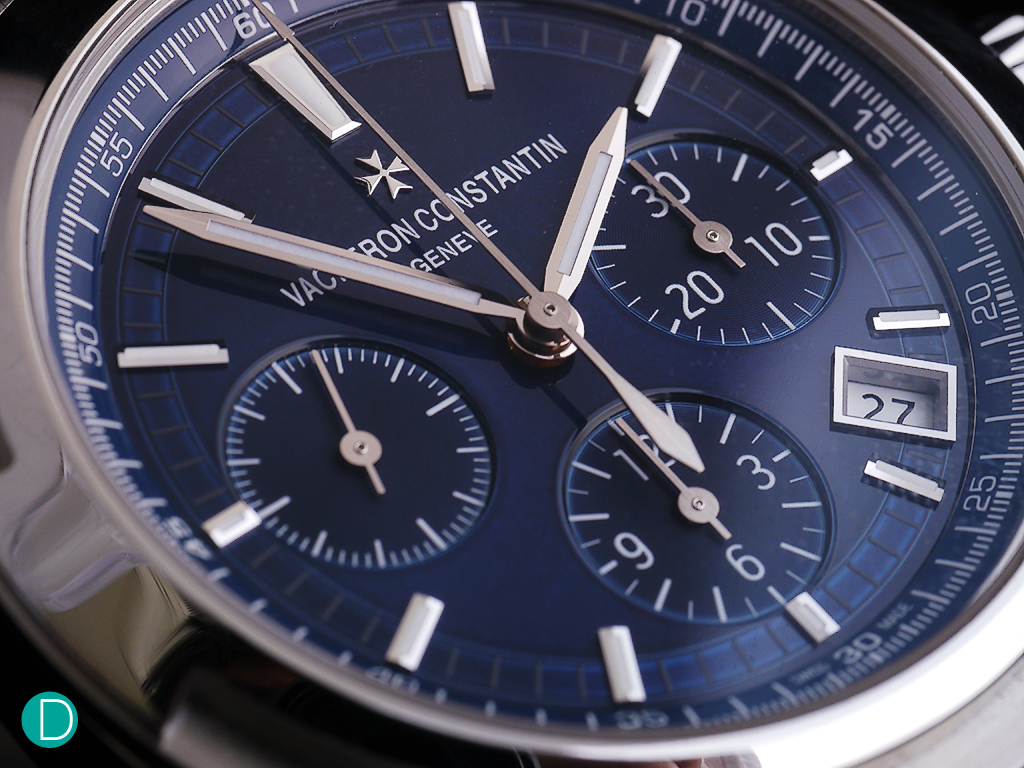 Dial detail showing the play of light on the blue laquer over the dial elements.

A wallpaper sized image measuring 1920 pixels x 1200 pixels is available for download. By clicking on this link to access the wallpaper, you agree to a free to use license limited to personal and non-commercial use with other rights to the photograph.

The imposing presence of the signature bezel, looking like a stylized six armed Malteze Cross (the classical 4 armed Malteze Cross is VC’s logo) remains a key feature. The sturdy case, 42mm in diameter and 12.45mm thick is water resistant up to 150m, and features a screw down crown and a clever quarter turn lock/unlock chronograph pushers. Also available in a white dial, for the stainless steel version. The design is simple to use. After one or two tries to learn the system, we were able to easily remove and install the bracelet or strap. The stainless steel version is delivered with a bracelet, a crocodile strap and a rubber strap. And the gold version is delivered with the crocodile strap and rubber strap. The bracelet and both straps are fitted with folding deployant buckles. Another interesting and easy to use feature is found for removing and attaching the buckles to the straps. A quick turn, 180 degree swivel on the buckle will release it from the strap. To fasten, the same action in reverse, and one can easily swap buckles between the croc and the rubber straps. Ingenious system. Works very well. Very secure and easy to use. The bracelet expansion system. The right side shows the expanded link when a firm but light force is applied in the direction of the red arrow, while the left side remains un-expanded.

A further feature is the bracelet size can be adjusted by applying a light, firm force to the bracelet where it comes together at the deployant buckle. This releases a built in catch which adds an additional 4mm to the bracelet circumference. A new in-house manufacture movement adorns the Ref. 5500V. The movement is a result of a five year development process and replaces the VC 1137. The 263 component caliber is fitted with a vertical clutch system and is more modern in design than the vintage inspired C3300 used in the Harmony Single Button Chronograph . The vertical clutch is controlled by the column wheel. When activated, it lifts the coupling clutch to engage precisely so that the chronograph hand does not jerk as it starts. This jerk of the chronograph hand is present in varying degrees in all horizontal clutch systems. As an example, the Lange Datograph, even in its latest iteration as caliber L951.6 in the Datograph Auf/Ab still uses a horizontal clutch, and the tiniest jerk can be observed when examining the start/stop procedure. In action, the C5200 is smooth to start, stop and reset with no visible jerking of the hands. The command center of teh C5200: the column wheel, with the signature Malteze Cross on top.

This movement is equipped with a twin barrel ensuring over 50 hours of power reserve. A soft iron ring suffices to provide anti-magnetic resistance of the watch, and allows a sapphire crystal to be fitted on the back to show the movement, and the 22k gold oscillating weight.

As expected from VC, case, dial, hands and movement is finished par excellence. All the traditional finissage points are well addressed, and beautifully executed.  The stainless steel bracelet is beautifully designed, and very nicely executed with juxtaposition of polished edges is eye catching and aesthetically pleasant against the brushed matt parts contrasting nicely. The blue laquered dial is paticularly charming, with the beautiful blue laquer partially revealing the sunburst, snailed and velvety finishing on the dial. The play with light is truly mesmerizing and captivating to look at. This version is the editor’s personal pick.

As we began, we are very enthusiastic on this watch. The design retains the old charm of the original VC 222, but appropriately updated. We are captivated by the blue dialed version in stainless steel. And the interchangable strap/bracelet system allows for 3 different looks for the watch…perhaps 3 in 1? Fit and finish is first rate, as one would expect from VC.

Perhaps comparisons are obvious to be drawn to the Audemars Piguet Royal Oak Chronograph (not Offshore!). The AP is overdue for an update, and the movement is getting a bit long in the tooth. The AP still runs the on what AP calls its Caliber 2385 which is also a F.Piguet 1185 based movement. And the finish of the AP Royal Oak series in general and the Chronograph is no exception, falls below that which VC achieves with the 5500V. The other obvious comparison would be to the Patek Philippe Nautilus Travel Time Chronograph, but that watch adds another dimension of a second timezone. Another comparison might be the Rolex Cosmograph Daytona, whose caliber 4130 is also a vertical clutch, column wheel modern design. Rolex is less expensive, and is constructed more as a tool watch than the more lofty luxury aspirations of the VC. The movement is not normally visible, but we had a peek when we photographed a Deployant Friend’s modified Daytona which featured a sapphire crystal on the back. From that comparison, the finishing on the Rolex 4130 can be seen to be directed at a competent engineered finish, while as we have observed, the VC 5500V is finished to the highest haute horogerie standards. The Daytona case and bracelets are also finished a bit on the rough side, with sharp edges, but on the VC these are smooth and polished. Perhaps a less obvious comparison might be the Grand Seiko Spring Drive Chronograph. While the Seiko is similarly finished, albeit to a different aesthetic style, it is a hybrid movement, with no balance wheel, but one which uses a glide wheel controlled by a quartz oscillator. For more information on the Grand Seiko Spring Drive see this article here.

Interestingly the new Overseas collection was introduced by VC as being inspired by travel has the earlier Dual Time Ref. 47450 deleted, and is not being replaced. In a confidential discussion with VC CEO Juan Carlos Torres (watch out for our In Conversation article soon), we were told simply to wait, and twinkle in his eye suggested a hint of what was in the works. But we digress.

So looking at the field, there is no apparent competition to a sporty, all purpose luxury chronograph, and it seems to us that the VC Overseas Chronograph 5500V is king of the hill.