Seiko’s Presage line is perhaps the industry benchmark of value propositions. Since its international debut in 2016, the myriad of striking pieces as well as their price points have continued to wow connoisseurs alike. This year’s offerings are no different: Baselworld 2018 saw the introduction of two new ‘flagship’ timepieces of its Presage collection – the SPB073 and SPB075, with the former having a power reserve indicator, and latter being a simple 3-hand which succeeds last year’s well-received SPB069. The main highlight is the new Shippo enamel dial: hand made using a traditional process by a world-renowned specialist manufacturer. But, how does it stack up? Sit tight as we go in-depth. The Seiko Presage Shippo SPB075 shares the same case as its well-received predecessor, the SPB069, and measures 40mm diameter and 12.4mm thick.

Crafted from stainless steel, the watch measures 40mm wide and 12.4mm thick. Stylistically, the contemporary size might not sit well with some. While considered big by classical standards, we find the size reasonable for daily wear: not overbearing on the wrists. The watch also sits well with appropriate heft and hugs the wrist comfortably; an enjoyable versatile dress piece. A classical and dressy piece: accentuated by the smooth sensual curves along its sides and usage of elongated roman numerals on the dial.

The design language suggests classical and dressy: the case features smooth sensual curves along its sides. This is further accentuated by usage of elongated roman numerals on the dial. Finishing is well-done with a healthy and neat blend of polished and brushed surfaces all-round. In particular, the twisted lugs are brushed top-side for better light reflexion and, faceted inwards to compliment the bezel. To top it off, we enjoyed the presence of a signed crown. Though minor, these touches enhance the aesthetics of this watch. Up close, we see the full details of the Shippo enamel guilloché dial. A rather handsome sight.

As with the Presage series, their main attraction is the intricate and handsome dial options. In recent releases, Seiko has expanded its offerings with more ornate dials such as the “Starlight”/Sakura Fubuki Cocktail Time and “baby snowflake”. Thus, it comes without surprise that the enamel models, available previously only in austere dial variants, would receive the same treatment. We will cover more on enamels later.

At first glance, the Presage Shippo would strike one as handsome and attractive. The sunburst blue dial dons a concentric guilloché pattern, rich and consistent in colour. It reflects light brilliantly, varying from a lighter to dark shade of blue under different lighting conditions; dynamic, for lack of a better word. Rather charming. Adding to its classical appeal is the usage of elongated roman numerals hour markers, and minute track. They pay homage to another Seiko, the 1895 Time Keeper pocket watch. Visual balance is well-executed with a minimalist amount of text. In particular, we enjoyed its attention-to-detail touches, with an example being the shrunken (as opposed to cut-off) Roman numeral at 3 o’clock to accommodate the date aperture. And like its siblings, the Presage Shippo uses a set of leaf hour and minute hands, and crescent-end seconds hand.

Turning the watch over, we find a transparent sapphire crystal case back. The Presage Shippo is limited to 2,500 pieces and will come mounted on a blue crocodile leather strap with deployant buckle. As a comparison the SPB073 is equipped with a power reserve indicator at 9 o’clock. 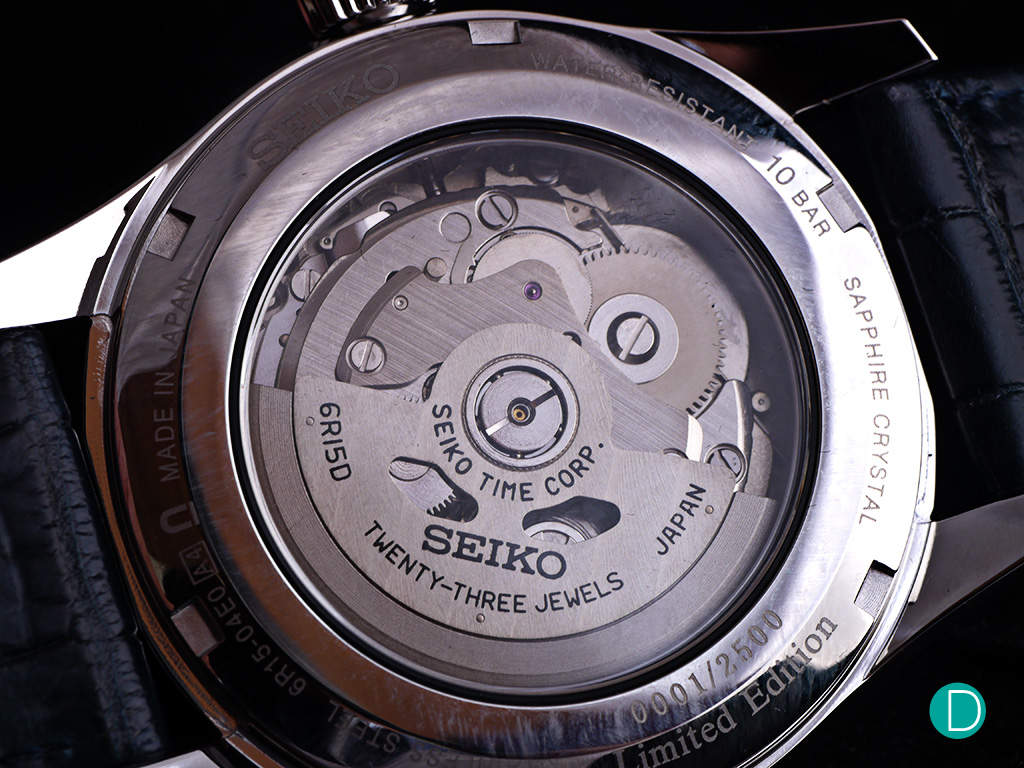 A sapphire crystal case back allows view of the caliber 6R15.

Reference SPB075 is powered by the robust in-house caliber 6R15. The automatic movement features a 50-hours power reserve and beats at 21,600 bph (3Hz). It is also factory-adjusted to an accuracy of -15/+25 seconds per day. Though not superlative in any aspect, our experience with Seiko movements tells us that the actual accuracy should surpass its rating after “settling in”. Finishing is typical of its caliber, with basic decorations such as “Tokyo Stripes” present on the rotor. Still, a well-engineered and respectable ‘workhorse’ movement.

Now to address the elephant in the room, so to speak. The 6R15 is an entry-level mechanical movement based largely upon the 7S26; a “high-spec” derivative of the latter, with hacking and hand-winding capabilities. It was introduced in 2006 for usage in mid to higher-end pieces. But with the base caliber being 5.3mm thick, the design limitations becomes obvious, perhaps more so in dressier pieces. We hope Seiko is able to roll-out its new 6L35 movement (slimmer at 3.7mm thin) into more pieces. We feel the new caliber would sit better for thinner and classical dress watches.

Enamel is essentially glass melted together with a pigment (typically a metal oxide) at temperatures between 800-1200°C. There are different techniques employed, and we feel we need to address the differences in grand feu and cloisonné here. We have also previously covered in-depth the process of grand feu enamelling, and highly recommend you give it a read here. The raw copper discs that forms the base of grand feu. Left shows one which is just stamped out, and right is cleaned after the acid bath.

‘Real’ enamel dials, or grand feu enamel represents the crème de la crème of enamel techniques and are very difficult to produce given their sheer delicacy and fragility. It is one of the most difficult techniques to master as the process is demanding: from cleaning the base plate, to oxide application, to firing; every step must be executed with pinpoint precision. So much so that it results in high rejection rates (cracking, imperfections, etc) and hence, very expensive dials. However when baked to perfection, the reward is a brilliant sheen that never fades. ‘Perfection’ here is relative as, given their hand made nature, no two dials are equal with minute variations that exists, however small. Grand Feu enamel dials are thus highly regarded and typically used by haute horlogerie manufacturers as a showcase of their impressive artisanal brawn. Not only are watches equipped with the dial rare, but also reserved for none save the well-heeled of collectors.

Left shows first coating of enamel after firing, while right is after 6 coats of enamel. The characteristic brilliant sheen can be observed.

On the other hand, we have coisonné enamel which means ‘to partition’. The dials are characterised by the way they’re segregated into compartments (‘cloisons’ in French) before firing. Instead of powdered oxide application, the motif is painted directly. This technique is traditionally used to decorate.

‘Shippo’ is the Japanese term for coisonné and was developed in Japan in the 17th century. Seiko’s Shippo enamel dials are made in Nagoya by Ando Cloisonné, a specialist manufacturer founded in 1880. The process starts with a blank decorated metal base to which the enamel glaze is hand painted by craftsman Wataru Totani. The dial is then klin-fired at 800°C. The painting and firing processes are repeated several times to ensure evenness of the enamel. Finally, the dial is polished to achieve a smooth surface. The end result is rather similar to another enamel technique: known as Flinqué in Europe, but perhaps not as vibrant like Shippo. After each round of painting, the enamel is klin-fired at 800°C to ensure that the glaze bonds firmly. Picture Credit: Seiko Watch Global, YouTube

Although both techniques have their merits, grand feu is better regarded by most. That said, we find Shippo and Seiko to be rather admirable in bringing the art and ethos of enamel to the masses. Not to mention in the form of a hand-finished guilloché enamel dial, at an accessible price with respectable quality. Props to Seiko. After all, the quality of either techniques still depends largely on the consistency of craftsmanship – something the Japanese is well-known for. The end product after repeated rounds of painting and firing, and a polish. Picture Credit: Seiko Watch Global, YouTube

With a recommended retail price of US$ 1,400, the Seiko SPB075 is arguably one of the best value proposition for an enamel dial timepiece. The guilloché Shippo, albeit not grand feu, is still a lot of dial for the money and we reckon hard to beat. Its usage of a hand-finished enamel dial by a prestigious manufacturer is almost unheard of in this price bracket. Discounting enamel-coated dials, the only true alternatives are perhaps the standard Presage Enamel Collection. Still, if one insists for more, we have previously rounded up a fine selection of them.

We begin with the Sinn 1746 Classic. For this reference, the main attraction is its high-quality vitreous enamel dial. The Sinn is perhaps the only other piece able to rival Seiko in its price bracket with such a dial. Powering the watch is an ETA 2892 automatic movement with 42-hours power reserve. It is encased in a contemporary 42mm polished stainless steel case and topped off with a sapphire crystal front. The Sinn 1746 retails at US$ 2,080 on leather.

Perhaps the best value ‘Swiss Made’ enamel dial timepiece is the Ulysse Nardin Classico Manufacture “Grand Feu”. A ‘Real’ enamel dial is employed – not surprising considering UN’s acquisition of Donzé Cadran, a well-known enamel dial maker. In fact, the material now exists in several of the brand’s timepieces. Several dial colours are available, but most apt is the blue guilloché which dons a similar ‘wave’ motif (using the Flinqué technique). The watch is powered by a COSC-certified in-house caliber, UN-320. It features a 48-hours power reserve and incorporates the signature Silicium hairspring and anchor escapement. The Ulysse Nardin starts at a rather reasonable S$ 12,300.

If one was looking for stunning dials, check out the Ophion OPH786. Although no enamel is applied to the Ophion dial, its main draw is the striking blue CNC guilloché dial (as opposed to stamped). The case dons a complete polish, with only the ‘hour ring’, minute track and logos sporting a brushed finish. Else, the watch is powered by a Technotime base caliber, albeit fully customised and boasts double barrels for longer power reserve. The Ophion OPH786 is priced at € 2,190.

We like the watch, and think that it offers tremendous value; consistent with the essence of Seiko’s Presage line. The Presage Shippo deserves praise for its (brave) venture into a segment dominated by haute horlogerie pieces. It might not be a grand feu we’ve come to love, but neither are we complaining, especially at the price bracket. And given Seiko’s track record of impressive dials in the Presage series, we reckon more to come. The new Seiko Presage Shippo deserves praise for its (brave) venture into a segment dominated by haute horlogerie pieces. Certainly a good-looking timepiece from any angle, and one that offers tremendous value.